Police are facing an Albanian crime wave with 50 thugs arrested each week amid a surge in drug-related gang warfare.

New figures revealed thousands of people from the tiny Balkan state are being detained in the UK for murder, sex offences, drug dealing, money laundering, people smuggling and death threats.

It follows warnings from the National Crime Agency that gangs of Albanian drug dealers are now ‘a significant threat’ on Britain’s streets – with increasing levels of ruthless brutality against victims.

Thousands of people from Albania (capital Tirana is pictured) are being detained in the UK for murder, sex offences, drug dealing, money laundering, people smuggling and death threats

Police chiefs said organised crime groups from the former Communist country now have huge influence on supplying cocaine around the country – and were willing to inflict serious violence to protect their lucrative illegal market.

It suggests around 1 in 11 of the 32,000 Albanian-born residents in England and Wales were detained, although some individuals may have been taken into custody more than once.

But thousands of Albanians allowed into the UK are suspected of adopting bogus identities from neighbouring Kosovo, claiming persecution during the regional conflict 18 years ago.

Imposters are now fronting a drugs and prostitution scandal on Britain’s streets.

MEP Jane Collins, the UKIP home affairs spokesman, said: ‘The number of Albanians arrested for other crimes who are here illegally demonstrates that our borders are currently not fit for purpose, even though we are an island.

‘It seems to me that we have people in the government and Home Office with a 16th century view of border management, whilst trafficking gangs are developing new strategies each day to get their human cargo into this country illegally.

‘We are hamstrung by our membership of the EU, which limits our ability to deal with immigration but a huge amount of the blame needs to be put at the door of the politicians and civil servants who have repeatedly mismanaged and cut finances for policing and security.’ 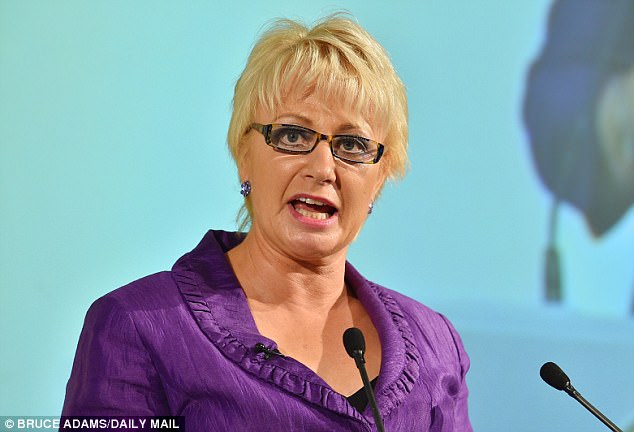 MEP Jane Collins, the UKIP home affairs spokesman, said Britain is ‘hamstrung by our membership of the EU’

The damning figures were uncovered in answers from 37 of the 43 police forces in England and Wales.

There were 649 Albanian inmates in jails at the end of June, making them the third largest foreign group.

The NCA report revealed that criminals from the Balkans were increasingly forging direct links with cocaine traffickers from South America.

‘The threat faced from Albanian crime groups is significant. London is their primary hub, but they are established across the UK,’ said the document.

In one case last year, a gang of 20 Albanian gangsters using fake Greek and Italian passports ran a round-the-clock dial-a-drug racket in Manchester, targeting the city’s nightclubs while living in lavishly decorated flats.

The armed Albanian thugs dressed in designer clothes to target revellers looking to buy cocaine at some of Manchester’s most exclusive nightspots.

Known in underworld circles simply as ‘The Albanians’, they also operated a sophisticated ‘dial-a-drug’ phone line, raking in £250,000 and living in lavishly-decorated apartments in the city centre.

They are believed to have worked with Manchester’s more established gangs – but were arming themselves with guns in case of conflict.

One of the main players, Mevlan Gjeta, 33, was jailed eight years after a kilo of cocaine plus £55,000 were found at his flat in the city.