It should be day one of any sex education class, when schoolchildren learn the basic parts of the female anatomy.

But half of men are embarrassingly unable to correctly label where a woman’s vagina is on a picture of the female body.

Much to their shame, 500 out of 1,000 men failed when asked to identify it on a diagram also showing the vulva, cervix, ovaries and Fallopian tubes.

The finding has been published to raise awareness of how little many of us know about gynaecological cancers. It is a common misconception that the opening of the genitals, the vulva, is the vagina, which is actually further up within the women’s body.

The Eve Appeal, which polled men and women to coincide with Gynaecological Cancer Awareness Month in September, found around one in six men ‘know nothing about gynaecological health issues and don’t feel that I need to know, as it is a female issue.’

The charity said that for too many men, women’s bodies are still a taboo subject, ‘shrouded in mystery’. Half of those surveyed said they would not be comfortable discussing gynaecological issues with a female partner.

However almost one in five women also said they would not go to see a doctor if they had abnormal vaginal bleeding – one of the key symptoms across cancers of the womb, ovaries, cervix, vagina and vulva.

The Eve Appeal’s chief executive, Athena Lamnisos, said: ‘These survey results show shockingly low levels of awareness of the symptoms of gynaecological cancer among both men and women.

‘We know from the many calls that we receive at The Eve Appeal from men, that they can play a vital role in identifying the symptoms of gynaecological cancer, prompting their partners to visit the GP. Early diagnosis really is key and can save lives.

‘This is not about having better sex. It’s about men helping women to look after their health. Gynae awareness and taboo busting are all of our responsibility, men and women alike.’

Half of women would not seek help for persistent bloating and 15 per cent would not go to the doctor if they found a lump or growth in their vagina, the poll found. 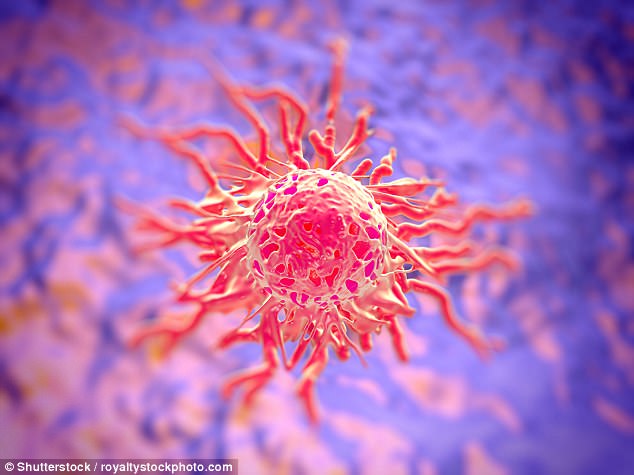 The charity conducted the study to raise more awareness of gynaecological cancers, which are diagnosed in 21,000 women each year. Pictured in a cervical cancer cell

Professor Janice Rymer, vice president of education at the Royal College of Obstetricians and Gynaecologists, said: ‘Women should never be embarrassed to see a healthcare practitioner if they have concerns about their gynaecological health.

‘It is vital to seek help if women experience any unusual vaginal bleeding, change in bowel or urinary habits, pain or discomfort during sex, or unpleasant smelling vaginal discharge. It may be nothing serious, but it’s best to get it checked out.’

The charity said that more than 21,000 women in the UK are diagnosed with a gynaecological cancer each year.

The Eve Appeal encourages anyone who has experienced possible symptoms of gynaecological cancer, including irregular bleeding, a bad-smelling or blood-stained vaginal discharge and pain during intercourse, to see their GP.

They can also contact the charity’s Ask Eve service on nurse@eveappeal.org.uk or freephone 0808 802 0019.