This weekend, I’m looking forward to a romantic dinner cooked for me by my boyfriend of two years, Patrick.

When I get to his house, the table will be laid, candles will be lit and my favourite freesia flowers will be on the table. He recently told me, over one such dinner: ‘You’re not in my world, Maria, you are my world.’

We always end the evening by going to bed together.

Forgive me if I seem to be boasting, or sharing a little too much. The truth is that I still can’t believe my good luck in finally having found happiness.

At 62, I am enjoying a sexually fulfilling relationship for the first time, and it is wonderfully liberating. At an age when many women are preparing to say goodbye to their sexual selves, I am leading the life I should have led in my 20s and 30s.

But until recently, things were very different — so much so that, as I revealed in the pages of Femail, at the age of 51 I was still a virgin despite having been married twice.

My generation of women don’t really talk about our sex lives. So why did I choose to share every detail of mine in the newspaper?

Maria-Louise Warne, pictured, now has a sizzling sex life at 62 after setting down in Charente, near Bordeaux in France

Well, because I’d finally realised that something had been really wrong in my two marriages, and that my own fear of speaking honestly about sex had made things worse.

I’ve always been a reasonably attractive, successful woman, so people probably just assumed I had a decent sex life. But being a married virgin was my secret shame for years.

It took a lot of gumption to speak candidly in the paper. But I was tired of feeling ashamed, and I hoped that by telling my story I’d help other women, too.

The truth was that throughout my married life I never felt properly married, never loved as a real woman. So how did this happen to me, not once but twice?

I wonder if my mother’s dysfunctional attitude to intimacy skewed my understanding of relationships from the start.

As an adolescent she told me sex was to be endured, not enjoyed, and I heard my parents arguing about it late at night.

My first marriage at 20 was to a much older man, John. He was always respectful, never pushing me to become intimate before our wedding. I found his physical reticence appealing: it reassured me that he wasn’t just after me for sex.

He later told me that he was deeply religious and believed sex was only for procreating; and, as I didn’t want to start a family straight away, he left me alone.

By the time we filed for divorce we were living amicably as brother and sister and sleeping in separate bedrooms.

It seems extraordinary now, but given what I’d learned from my mother, I concluded I was having a lucky escape. It caused me surprisingly little sadness: because I’d never known passion, I didn’t have a clue what I was missing.

Then, in 1982, I met my second husband, Carol. At 47, he was 22 years my senior, married and the father of two daughters. He seemed to me the epitome of sophistication, with a good physique and a twinkle in his eye. I was smitten, and he awakened in me all those healthy sexual feelings that John never had.

And yet, our union, too, was ultimately limited by his total lack of interest in sex.

I was beginning to think there was something wrong with me. Once or twice I put on sexy underwear and tried to seduce him. But he told me it wasn’t appropriate. 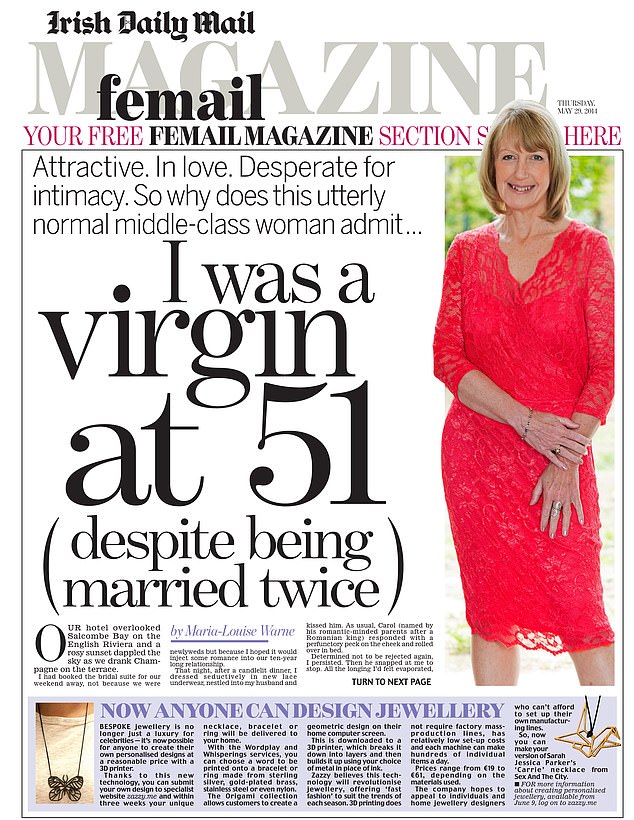 In 2014, Maria-Louise explained that her first husband had been deeply religious and thought sex should just be for procreation, while her second had no interest in it

Feelings of shame and embarrassment began to consume me. I also worried that the chance to have children was passing me by, as Carol flatly refused even to try.

I thought about leaving him, but by then he was in very ill-health. Instead, we decided to move to France for a fresh start, and bought a home in Charente, near Bordeaux, where I retrained as an English teacher.

For a while, we were happy — but still, I’d spent decades never knowing what it was like to make love. I didn’t talk to anyone about it because I was convinced it was my fault. While I had achieved orgasm on my own, that rare pleasure came as a result of the novels I read.

My second marriage ended in 2008. Suddenly single for the first time in 30 years, I determined that I was going to have sex at last, and recklessly allowed myself to be seduced by a chap in the village.

The first time, I was terribly embarrassed and ashamed. So I let him lead the way. I confessed to him afterwards that I was a virgin, and he could hardly believe it.

After that, he was extremely patient with me, gently offering to teach me how to please a man and to help me explore my body.

This experience — and I am fortunate that it was a gentle, caring one — was revolutionary for me, and I became convinced that I should share what I had learned with other women.

I’d always read the Daily Mail, and had often marvelled at the courage women had in sharing the intimate details of their lives.

So I wrote to Femail, and they published my story in 2014. Sure enough, dozens of other women contacted me, sharing similar stories of marriages without intimacy. I wrote back to each one, offering support and guidance.

Writing the piece was extremely liberating. In fact, my life today is testimony to the saying that the truth sets you free.

When I compare myself now with the frightened, timid woman I was back then, I can hardly believe the difference. Instead of living to make my husband happy, or trying in vain to arouse some sort of desire in him, I have time to explore what I like and don’t like.

Home is now in a pretty little village near Bordeaux. I’m still teaching English, too, both to professionals such as doctors and lawyers, and to boys and girls who need help with lessons.

Although I now know that I’ll never be a mother, I love helping these children and am delighted when they call out my nickname ‘Bonjour Ma-Lou!’ in the street when they see me.

I’m always busy, and go for a 15km run most mornings before starting work. When I get home in the evening, I’m greeted by my two Chihuahuas, Harry and Barney, and I might host a group of female friends or meet a pal at our favourite sushi restaurant.

Thanks to being open about my past, I know there was nothing wrong with me; that I was never ‘damaged goods’, as I feared for so many years when my second husband rejected me again and again.

For many women, their 50s and 60s are a time of waning desire. But for me, they have been deeply liberating — a decade in which I have come to know myself more deeply, experience pleasure more fully and finally feel fulfilled and happy in a relationship.

And, yes, that includes lots of sex. Patrick (who I met through mutual friends) and I go away every two months for a three-night break in a hotel. I’ve just bought a pair of red stilettos and some expensive underwear for our next trip. At last, I have got my happy ever after.