$50m lawsuit filed against trooper who tasered a boy, 15,

A $50-million lawsuit has been filed against a Michigan State Trooper who ended up Tasing a teenager from Detroit that was riding an ATV.

15-year-old Demond Grimes ended up crashing the vehicle and then dying from his injuries.

In a lawsuit against a Michigan State Police trooper, which was filed on Wednesday, the family describe the incident that saw their teenage son killed as ‘a drive-by shooting of a child on an ATV.’

‘Under no circumstance should any police officer ever shoot like a cowboy out of his vehicle, out the window,’ attorney Geoffrey Fieger said as he filed the lawsuit alongside Demond’s mother and father, Monique and John Grimes.

A $50-million lawsuit has been filed against a Michigan State Trooper who ended up Tasing Demond Grimes, a teenager from Detroit that was riding an ATV. The crashed killed him 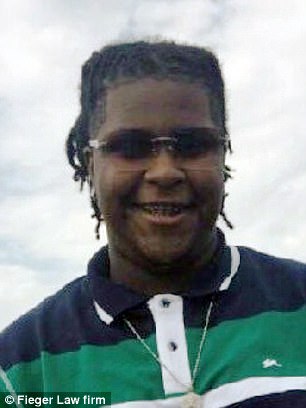 Grimes didn’t comply with the trooper’s request to stop and so he gave chase at some deploying his Taser, striking the boy, who then drove the ATV over a curb and slammed into the back of a pickup

On Saturday evening, Grimes was killed after crashing his four-wheeled, all-terrain vehicle into a pickup truck.

According WXYZ Michigan State Police Lt. Mike Shaw said that the incident began when troopers tried to stop Grimes for driving recklessly around 5:30 p.m. on Saturday.

Troopers turned on their lights and sirens but the driver refused to stop.

The troopers pursued the ATVwhen the teen tried to drive off the road and onto a sidewalk. He crashed into the back of a pickup truck.

Grimes was just weeks away from starting the ninth grade at Michigan Collegiate High School in Warren.

The Detroit Free Press has confirmed the trooper’s identity as Mark Bessner.

Bessner is alleged to have reached out the window of his patrol car and shocked  the teen with a taser in order to get him off the road.

The Free Press states that it is a violation of Michigan State Police policy to fire a Taser from a moving vehicle.

The Trooper’s office have not yet officially confirmed the name of the officer that fired the fatal shot, and so the lawsuit was filed against a ‘John Doe’ defendant.