$550 headset could ‘train your brain’ to choose healthy foods

Could a $550 headset mean the end of diets? Meditation gadget claims to be able to ‘train your brain’ to choose healthy foods

By Emily Kent Smith In Las Vegas For The Daily Mail

A headset which encourages the wearer to think of apples rather than chocolate could bring an end to dieting, creators claim.

The ‘BrainTap’, a pair of laboratory style glasses with connected earphones, comes with a hefty price £430 tag.

But its founders, a nutritionist and councillor, claim the device could also kick anything from cigarette dependency to helping those affected by Post Traumatic Stress Disorder (PTSD).

The meditation headset was on show at the Consumer Electronics Show (CES) in Las Vegas, and can also help kick nicotine addiction, its makers claim.

BrainTap has around 50 different session categories covering themes such sugar and chocolate addiction as well as stress or nicotine dependency.

It can be used as a normal app with headphones, and is available for iOS and Android.

The headsets are designed to be worn for around 20 minutes a day – with chiropractors and medics using them in cities across the UK, creators claim.

They are also used in offices to help stressed-out employees ‘reboot their brains’.

Asked what the machine would do for a person who thinks of chocolates or sweets each day, Mr Porter said: ‘It would help them pick healthier choices, visualising them picking other choices and seeing themselves doing it, like [eating] an apple’. 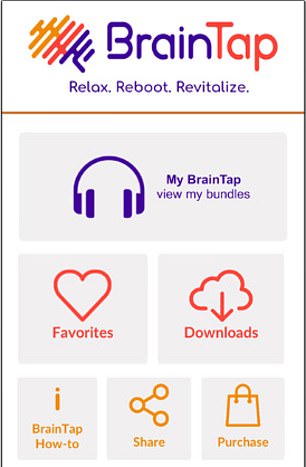 It can be used as a normal app with headphones, and is available for iOS and Android.

‘You have a favourite actor or actress, when they get on set they don’t play their own character, they get a new script.

‘They will learn that part in two or three days – we normally have a person for three to six months,’ he said.

BrainTap has around 50 different session categories covering themes such sugar and chocolate addiction as well as stress or nicotine dependency.

The devices which have been sold to businesses for decades are now being rolled out commercially and are on show at this year’s Consumer Electronics Show (CES) in Las Vegas, USA.