58 ALL OUT! England suffer nightmare start to New Zealand Test

England endured a disastrous start to their Test series with New Zealand when they were bowled out for just 58 – their sixth-lowest Test total.

In a continuation of their dreadful Ashes performances across the Tasman, England slumped to 27 for nine before Craig Overton’s unbeaten 33 at least carried them above their previous lowest total of 45.

Nonetheless, England were still dismissed in 20.4 overs and just 95 minutes at Eden Park in Auckland as captain Joe Root, the returning Ben Stokes, Jonny Bairstow, Moeen Ali and Stuart Broad were all out for ducks.

Alastair Cook was the first of England’s wickets to fall, dismissed by Trent Boult for just five 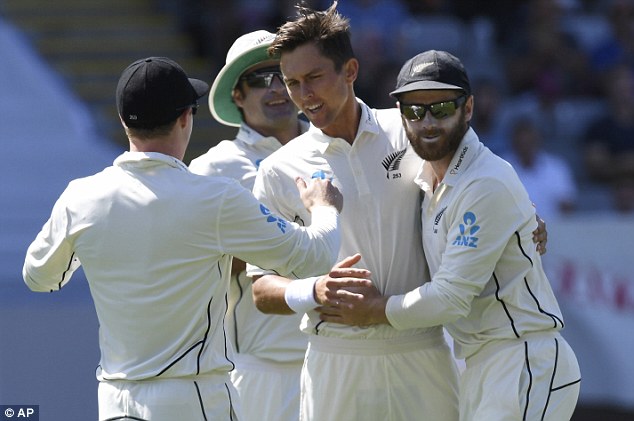 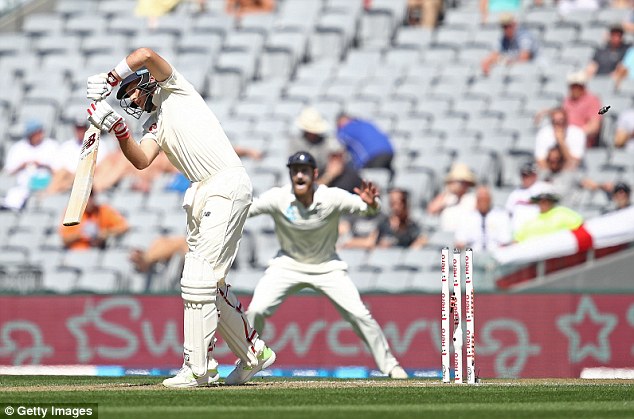 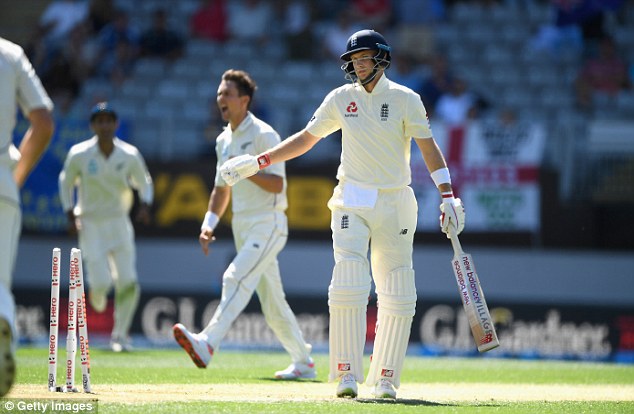 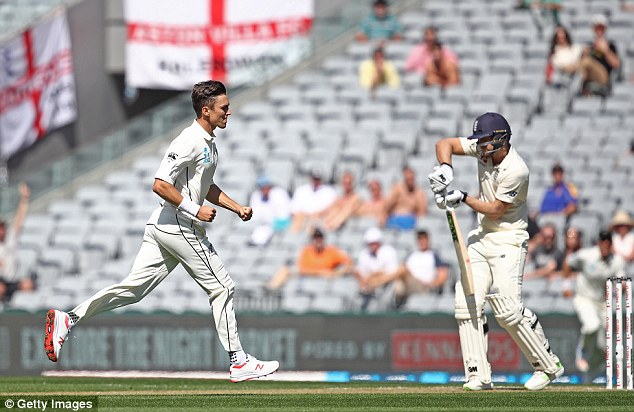 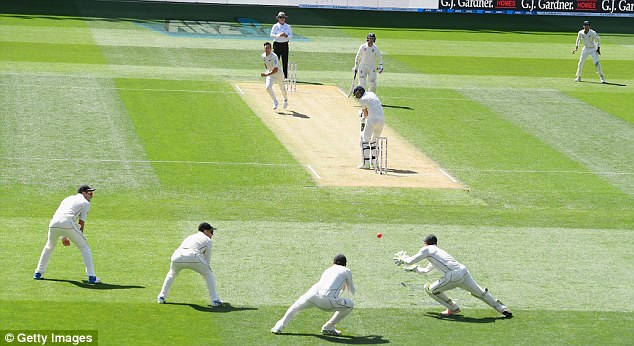 The five batsmen out for no score equalled an unwanted record.

New Zealand bowler Trent Boult was magnificent, taking six wickets for 32, while Tim Southee recorded figures of four wickets for 25 as they capitalised on swing-friendly conditions.

However, England’s batsmen revealed alarming technical deficiencies and shattered confidence following their 4-0 Ashes drubbing by Australia, with Mark Stoneman (11) and Overton the only players to get into double figures.

The tourists became only the fifth side to be bowled out inside the first session of a Test, which is being played in a day-night format with a pink ball. 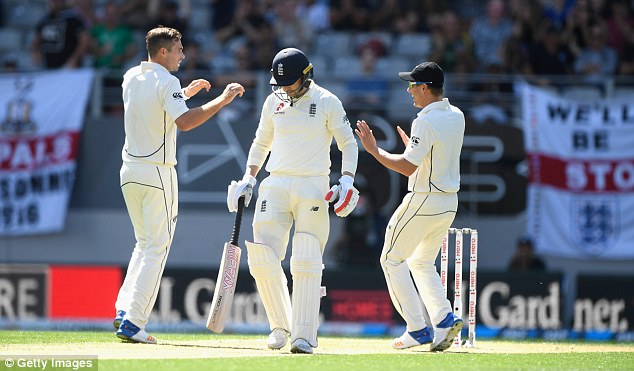 Mark Stoneman was the fourth wicket to fall, caught by Watling off the bowling of Tim Southee 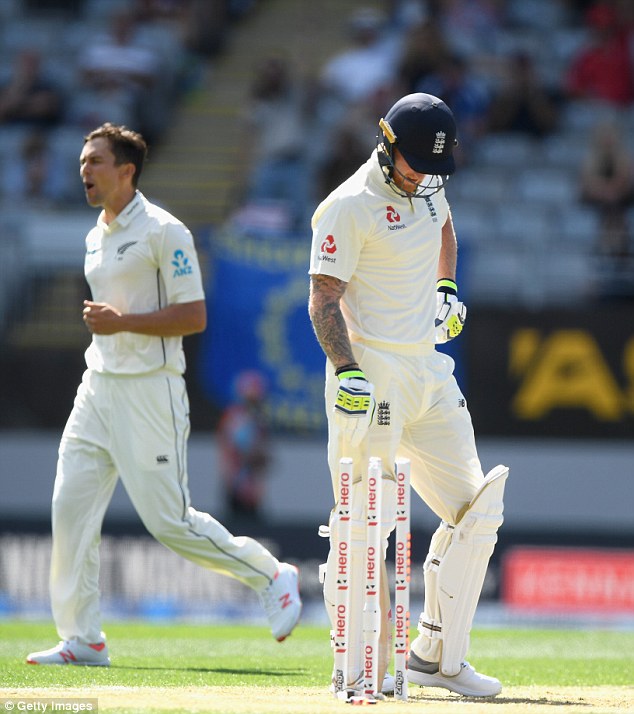 Ben Stokes, back in the England Test side, was the next to fall – also for a duck 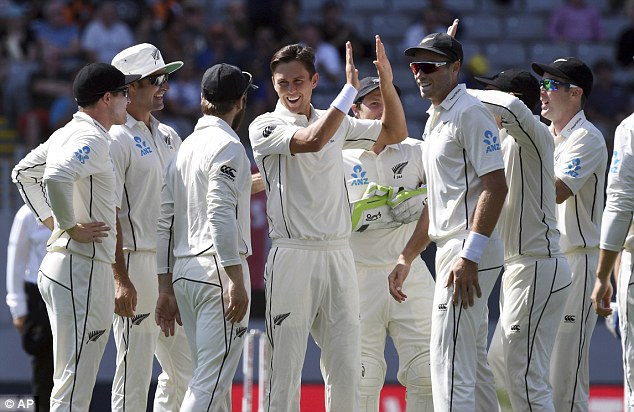 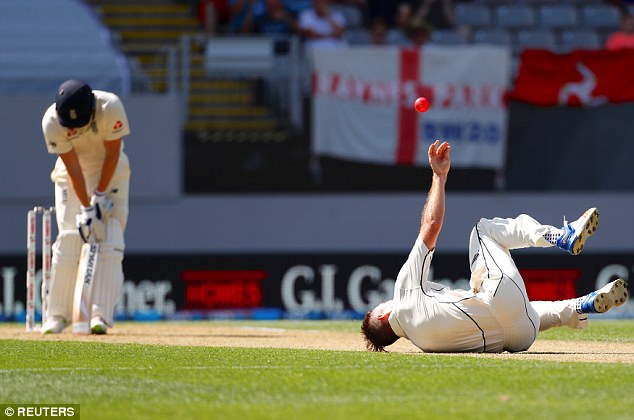 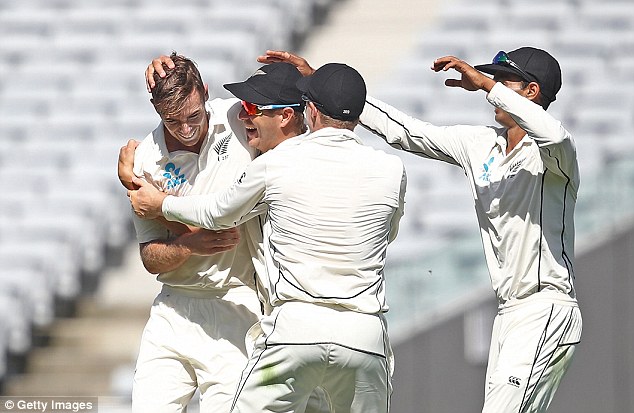 Bairstow was the third player out without scoring, with England now on 18 for six 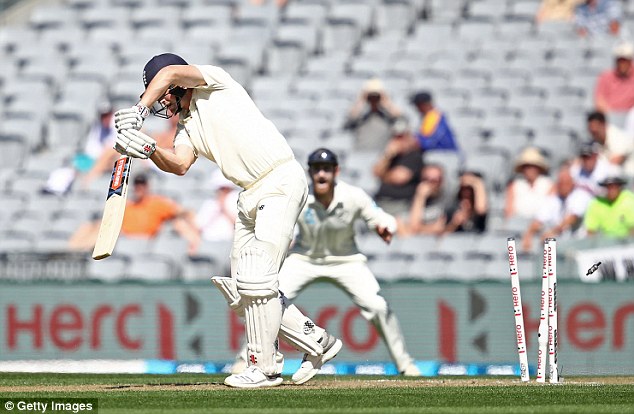 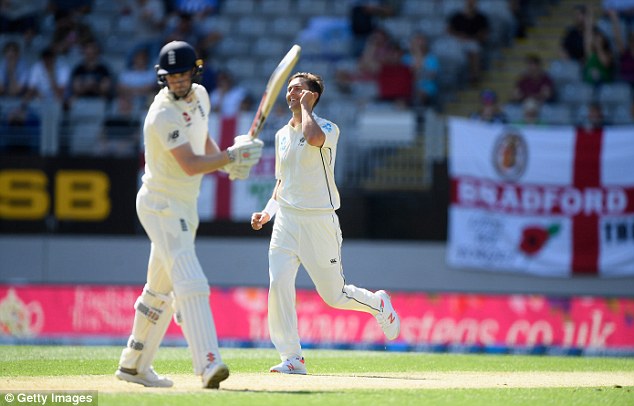 With Woakes gone, England had slumped to 27 for seven, short of their worst Test score

This was England’s sixth-worst Test score. Here are the other five…

Australia won the toss and opted to field in the first Ashes Test at the Sydney Cricket Ground, with Charlie Turner (15 for six) and JJ Ferris (27 for four) working their way through the tourists in 35.3 four-ball overs. England went on to win the Test by 13 runs.

England needed 193 in their second innings to beat the Windies in the third Test, but Curtly Ambrose had other ideas. A 10-over spell yielded six England wickets for 24 runs, with Alec Stewart the only tourist to record double figures.

The Windies had a 74-run lead after the first innings in the First Test but skittled England to avoid having to bat again. Jerome Taylor took a five-for, costing only 11 runs. England found themselves on 26 for seven after 20 overs as Andrew Flintoff top scored with 24.

The worst England innings score on home turf came in 1948 against Australia in a Test where Donald Bradman went for a duck which reduced his Test average to 99.94. Australia were 3-0 up in the Ashes going into the Oval Test but Leonard Hutton stood strong while his team-mates fell one by one.

The first Ashes Test in 1888 has three entries in the lowest 50 Test innings scores of all time, led by a first innings flop by the home side. Chasing a 116 set by Australia, England fell to 22 for six and 26 for seven before recovering as Johnny Briggs was the last man to fall on 17.

Alastair Cook was the first to fall, for just five, and Root quickly followed. Dawid Malan was dismissed for a mere two runs, followed by Stoneman to leave England floundering on 18 for four.

Things only got worse, with Stokes, back in the Test side with much fanfare following his altercation outside a Bristol nightclub in September, and Bairstow gone soon after with the score still on 18.

The quick-fire dismissals of Chris Woakes and Moeen left England on 23 for eight, and they looked destined to slump short of their lowest-ever Test score when Broad fell at 27 for nine. 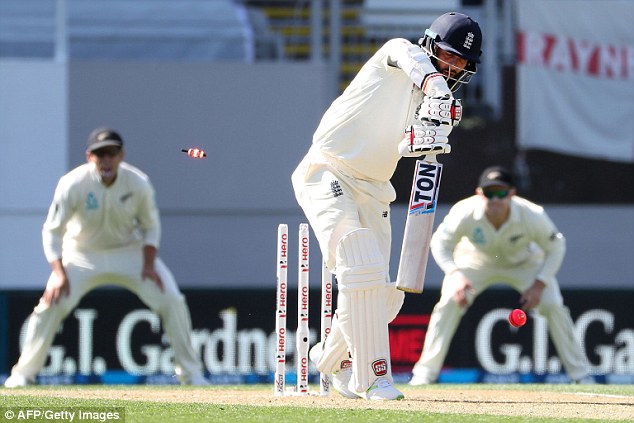 Moeen Ali was the next to fall, clean bowled by Tim Southee, also for no score 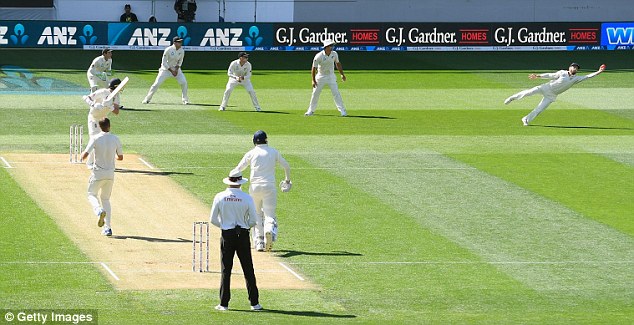 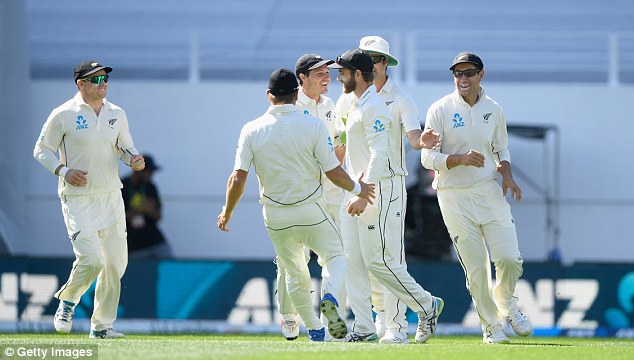 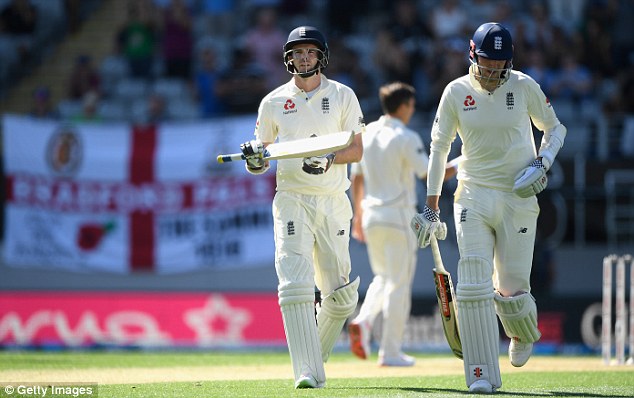 Thankfuly, Overton’s 33 spared them that indignity before James Anderson was the final wicket to fall.

The official England Cricket Twitter feed summed it up nicely when it simply posted ‘We’ve had a shocker’ and a link to the scorecard as cricket fans in the UK woke up on Thursday morning.

New Zealand soon passed England’s total in response thanks to a half-century by Kane Williamson, but Stuart Broad did gain his 400th Test wicket when he removed Tom Latham for 26.

How the wickets fell

4.2 overs – Alastair Cook pushes forward but is defeated by Trent Boult’s away swing and edges to second slip. Six for one.

6.2 – Joe Root tries to break the shackles after five balls without scoring. Looking to drive, he is bowled through the gate by Boult. Six for two.

8.1 – Action replay of Cook’s departure, but caught-behind this time, as Dawid Malan gets another beauty from Boult. 16 for three.

9.4 – Mark Stoneman joins the collapse, and Tim Southee is in the mix with a very good delivery as another left-hander goes caught-behind. 18 for four.

10.3 – Ben Stokes’ Test return ends in a duck at the first attempt, another bowled through the gate by Boult. 18 for five.

11.2 – Jonny Bairstow’s hopes of a counter-attack fall at the first as he drives a return catch back to Southee. 18 for six.

15.4 – Stuart Broad tries to return fire, but departs scoreless – the fifth duck of the innings – to an outstanding catch in the gully by Kane Williamson off Southee. 27 for nine.

20.4 – Craig Overton and James Anderson avoid England’s all-time low at least, but it’s all over when the number 11 lobs a simple catch to point to complete Boult’s devastation. 58 all out.