Lloyds £60m man bows out: Departing boss Horta-Osorio insists the bank is now back on its feet – buts its shares are STILL languishing

The boss of Lloyds Bank scooped another £3.4million last year – taking his pay to almost £60million during his decade at the lender.

Antonio Horta-Osorio, who took over as chief executive in 2011, is set to leave Britain’s biggest mortgage lender at the end of April.

But he managed to sneak in one last strategy update before his departure, announcing that Lloyds would slash its office space by 20 per cent and aim to become a leader in wealth management over the next three years.

Antonio Horta-Osorio, who took over as Lloyds chief executive in 2011, is set to leave Britain’s biggest mortgage lender at the end of April

And although his pay last year was £1million less than in 2019, it took his rewards in the job to £59.5million.

Horta-Osorio said: ‘I feel I will be leaving the bank in a better position than it was in when I joined, which should be the purpose of any chief executive.’

The 57-year-old banker took over at Lloyds in the aftermath of the financial crisis, and was credited with helping the bank return to health and back to private ownership after its government bailout.

The shares initially rose under his tenure from 62p when he started to a peak of 88p in 2015, but are now languishing at 39.34p after Brexit and coronavirus weighed on the economy.

In full-year results for 2020, Lloyds revealed that its profits slumped 72 per cent to £1.2billion. It set aside £4.2billion for loans that it expects to turn sour, as customers affected by the pandemic struggle to repay their debts.

But this was less than analysts had been expecting, and finance chief William Chalmers said Boris Johnson’s four-step plan for leaving lockdown had boosted optimism within the bank. 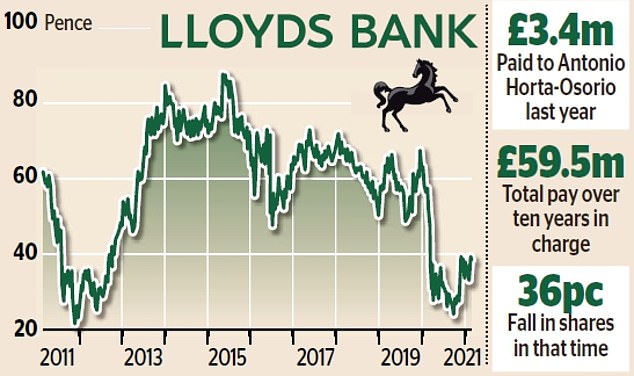 It followed its rivals in resuming its dividend, after the Bank of England lifted its coronavirus ban on payouts, handing investors 0.57p per share.

Lloyds also became the latest bank to usher in flexible working, after an internal survey revealed 77 per cent of staff did not want to return to the office full-time.

It said it would trim its office space by 20 per cent by 2023, and refurbish those it retained to make them more ‘collaborative’, as many employees wanted to continue to work from home several days per week.

But its decision will be another blow to the city centres which rely on office workers to fuel their local businesses, after HSBC unveiled plans to axe 40 per cent of its office space this week.

And Metro Bank’s boss Dan Frumkin said that his office staff were likely to make more use of basements and extra space within branches, after the lender ditched its central London office at Old Bailey.

While it cuts down on office space, Lloyds is planning to plough more money into technology and its wealth management arm, as it wants to become a top three financial planning business by 2025.

It is currently partnering with asset management company Schroders, so customers can access investment services and wealth management advice from the blue-blooded investment firm.

And it wants to improve its data analytics and machine learning capabilities, so that its technology will be able to flag up which customers are heading for financial trouble and may need help before they hit the rocks.

Lloyds also wants to beef up its investment banking arm, which is much smaller than its rivals such as Barclays and Natwest.

Horta-Osorio said that it would focus on improving its foreign exchange and sterling rates products for existing corporate customers.

Lloyds is still waiting on the outcome of the delayed review into its handling of the HBOS Reading scandal, where fraudsters milked millions of pounds from small business customers and pushed them to collapse.

The review is being led by former High Court judge Dame Linda Dobbs, and should be completed later this year.