66% of New York coronavirus hospitalizations are people staying at HOME

The majority of people who are still being hospitalized with the coronavirus across the state of New York are staying at home and are not essential workers, new data has revealed, prompting the questions of whether or not lockdown even works or for how much longer it will be necessary.

In a study of some 1,000 new patients admitted to New York hospitals over the last week, 66 percent were staying at home and 18 percent had come from nursing homes, meaning they either became infected by going out to get groceries or other essential items, or from seeing people outside of work.

Gov. Cuomo said they were clearly becoming infected as a result of personal behavior, something that can’t be controlled by his lock-down.

There are now 19,877 deaths in New York state and more than 321,000 cases of the virus. Across America, there have been more than 1million cases and 72,000 deaths. Recent data shows that while New York’s numbers are decreasing, the rest of America’s are on the rise.

More than 80 percent of the new New York hospitalizations had not taken any public transport since the stay-at-home order began in March and that number rose to 90 percent in New York City, but only 55 percent of study respondents answered the question on transport.

Of all the new hospitalizations, 73 percent were over the age of 51. The worst affected group were people aged 61 to 70 who accounted for 20 percent of the hospitalizations.

Almost all of them – 96 percent – had underlying conditions. Most cases were in Manhattan, with 21 percent coming from there, but almost as many – 18 percent – were in Long Island.

Cuomo revealed the data on Wednesday at his daily briefing. It came from a survey of hospitals conducted over the last week in an effort to drill down on why so many people were still becoming infected and who they were.

He said that while it shows the number of new infections is being caused by ‘personal behavior’ and not the lockdown, the stay-at-home order had generally thwarted the virus enough that it still a good overarching plan. 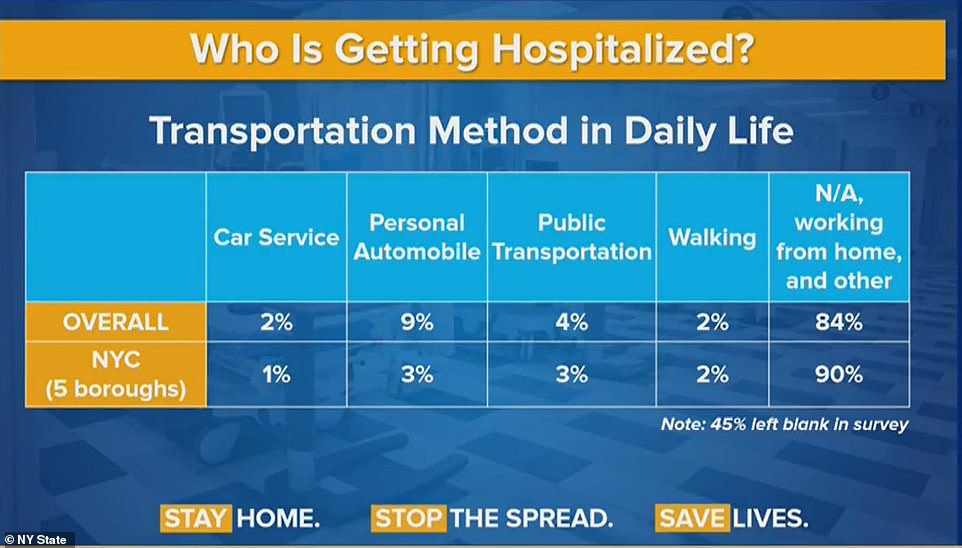 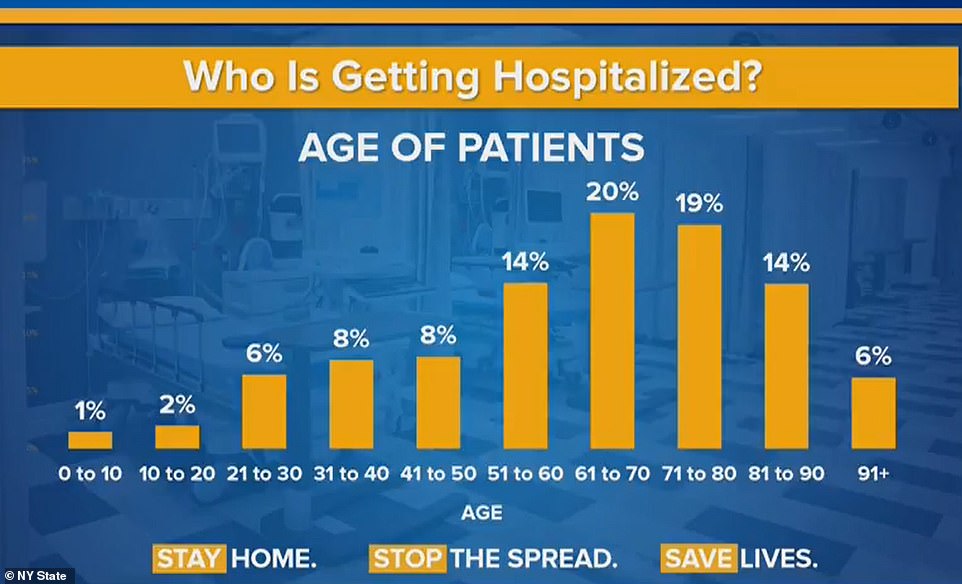 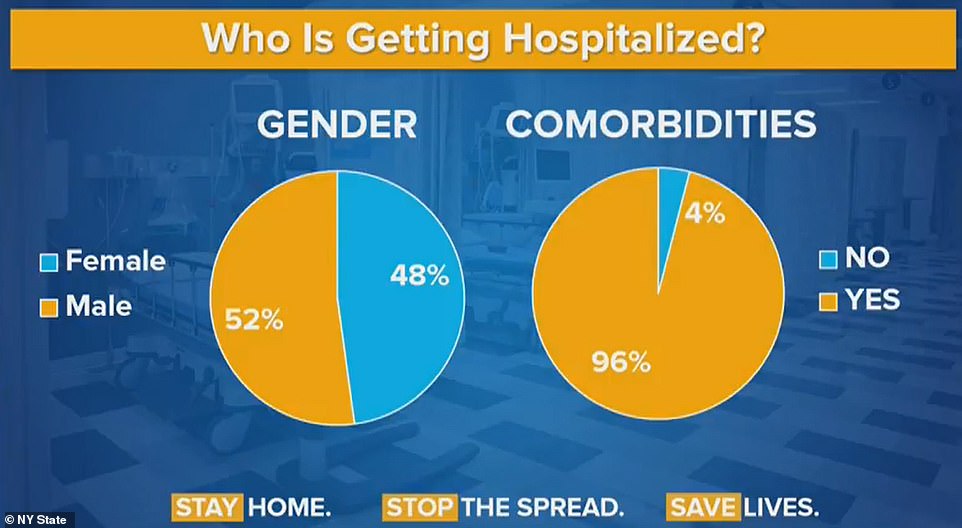 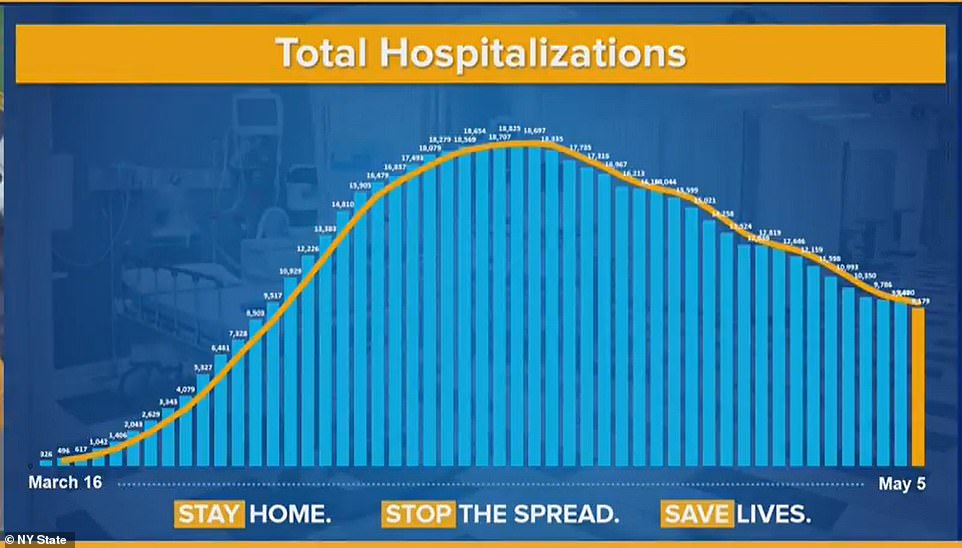 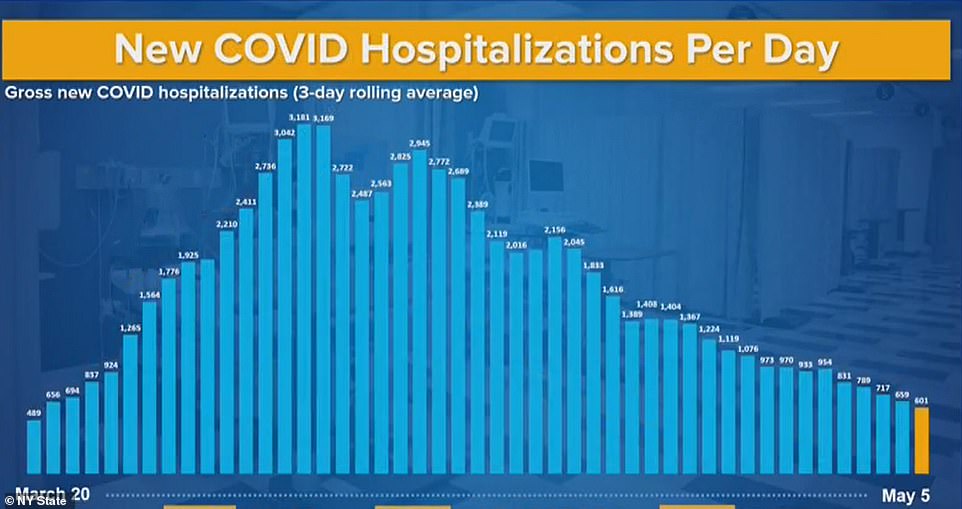 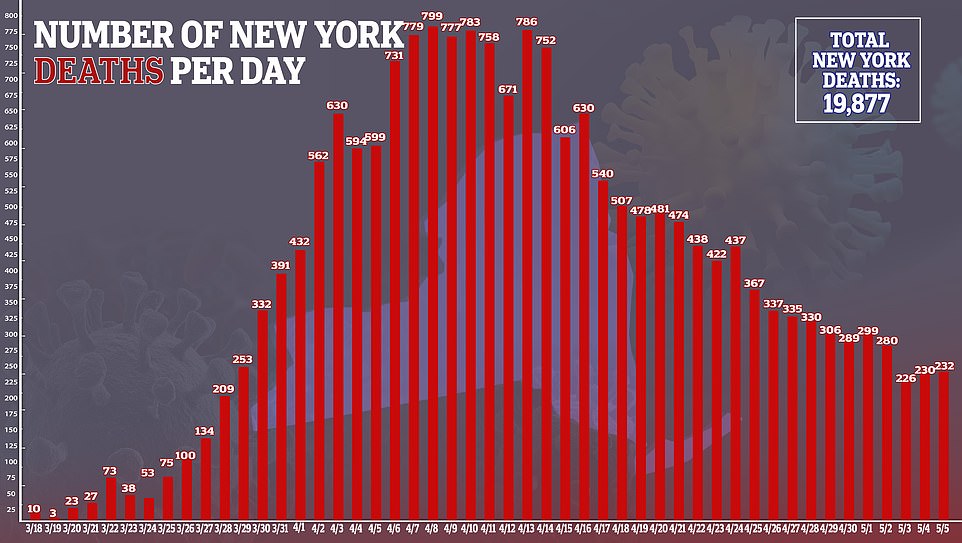 ‘The numbers in the rest of the nation are going up. To me that vindicates what we are doing here. What we’re doing here shows results,’ he said.

New York has decreased the infection spread and death count dramatically but it has taken nearly eight weeks of a total shut down of the state, including New York City.

Millions are out of work as a result, and those who do have jobs are desperate to return to them. 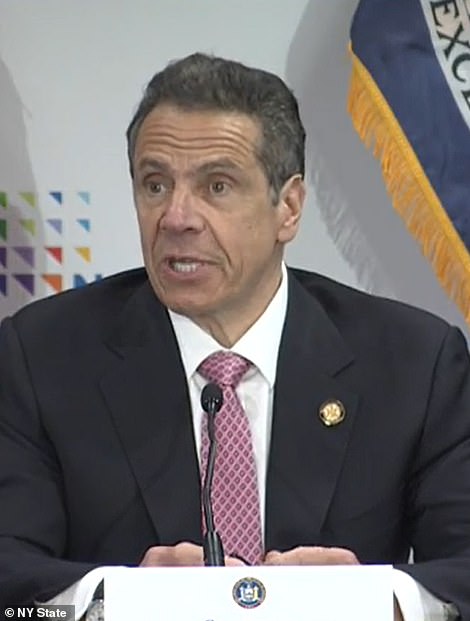 But the state remains closed until May 15 at least. Then, regions must meet seven strict requirements set out by Cuomo before they can start a ‘phased’ reopening that will begin with manufacturing and construction workers, then move on to professional services. Restaurants will be in the third phase and education and entertainment will be last.

Businesses have been told to come up with new plans to reduce worker density for when employees go back to work, but it’s unclear if and when he will let them reopen once they have their plans in place.

On Wednesday, Cuomo said it was clear that there was an issue with crowds and density of workers rather than specific industries or areas.

There were another 232 deaths across the state on Tuesday, bringing the total death toll to 19,877, and more than 321,000 cases have been detected.

There were some 600 new hospitalizations on Tuesday, which Cuomo said is still high but marks a downward trend since last week when more than 1,000 people were being hospitalized with the virus every day.

Cuomo said the survey results were ‘surprising’ but showed people were not making the right personal choices even when at home.

He also warned that when the crisis was over, the true number of deaths would likely be ‘far worse’ than what is being reported now with more likely to be found in at-home deaths or even before the first cases were found in the US. 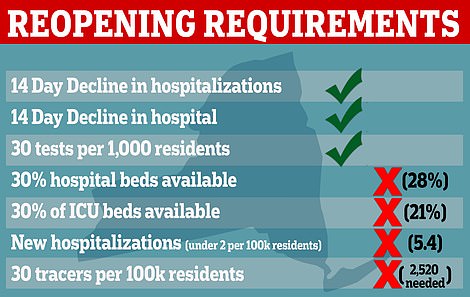 Cuomo was joined via video conference by Eric Schmidt, of Google, who announced the company will help the state with technology to boost tele-medicine services.

The state ordered the hospital survey last week as the number of new hospitalizations hovered around 1,000 a day.

‘With everything we’ve done, you still have 600 new cases that walked in the door yesterday. Where are they coming from?

‘Overwhelmingly, the people were at home… which is shocking to us,’ he said.

He also defended his phased reopening plan, that was revealed on Monday and involves construction and manufacturing businesses returning to work first only if all of his criteria are met. 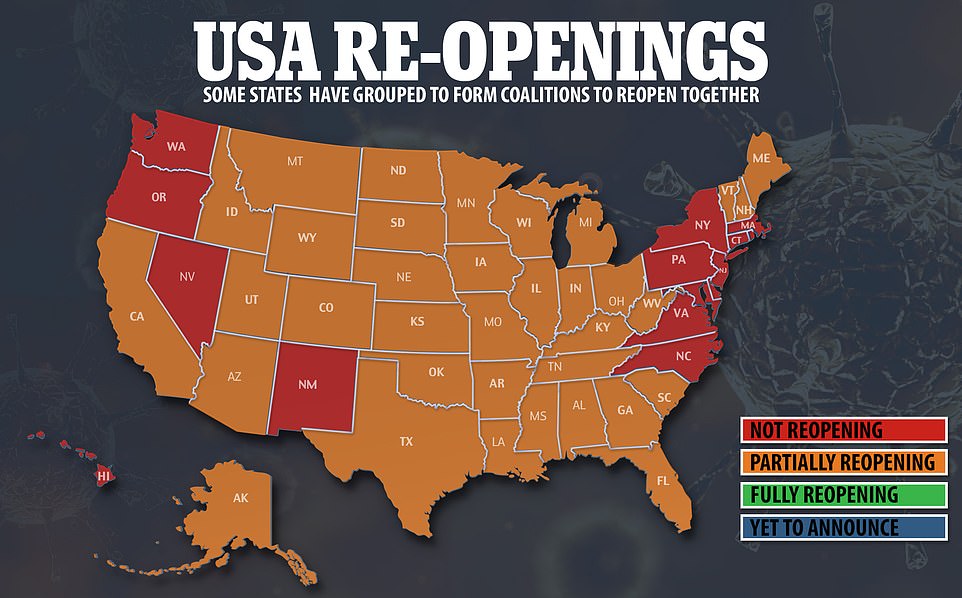 ‘There are specific factual data points that each region has to assess.

‘Do you have healthcare capacity if god forbid that infection rate takes off on you?

‘If yes to those questions then in that region, working with local officials, what businesses do we reopen and the analysis here is businesses that are most essential and pose the lowest risk should go first.

‘Construction jobs, exterior workers are basically socially distanced by the nature of the work – manufacturing, in a manufacturing setting where you can do social distancing.

‘You want to make sure you have the virus on the retreat, that you;re not still seeing that virus like fire through dry grass. We do have it on the retreat.

‘Different levels in all parts of the state which is dramatically different than the numbers for the nation You haves states reopening where they’re still on the incline.  I think that’s a mistake,’ he said.