PICTURED: Aftermath of massive 7.7-magnitude earthquake in the Caribbean that triggered a tsunami warning off the coasts of Cuba and Jamaica as buildings in Miami were evacuated and ‘sewage’ spilled into the streets in the Cayman Islands

A massive 7.7-magnitude earthquake in the Caribbean triggered a tsunami warning in several countries including Jamaica, Cuba and the Cayman Islands on Tuesday.

The quake struck at 2.10pm EST in the strait between Jamaica and Cuba. Its epicenter was about 72 miles northwest of Lucea, Jamaica, and 87 miles southwest of Niquero, Cuba, at a depth of 6.2 miles, according to the US Geological Survey.

Schools and buildings in Jamaica and Cuba were evacuated after people reported feeling the ground shake for about a minute. The quake was felt as far away as Miami, where several downtown skyscrapers were evacuated.

The Pacific Tsunami Warning Center issued an alert cautioning that waves up to 3.5-feet above the normal tide level were possible along the coasts of Belize, Cuba, Honduras, Mexico, Jamaica and the Cayman Islands.

The alert was updated just before 3.45pm EST to say ‘the tsunami threat has now largely passed’, and the National Weather Service confirmed soon after that no warnings, watches or advisories were in effect.

No deaths or injuries have been reported and the extent of the damage is still emerging as new images show massive sinkholes opened up on roads in the Cayman Islands and residents say what appears to be sewage is spilling out of broken pipes.

There is still a threat of aftershocks after one significant one – rated 6.5 magnitude – was reported around 5pm.

A massive 7.7-magnitude earthquake in the Caribbean triggered a tsunami warning in several countries including Jamaica, Cuba and the Cayman Islands on Tuesday

The quake struck at 2.10pm EST in the strait between Jamaica and Cuba. Its epicenter was about 72 miles northwest of Lucea, Jamaica, and 87 miles southwest of Niquero, Cuba, at a depth of 6.2 miles, according to the US Geological Survey 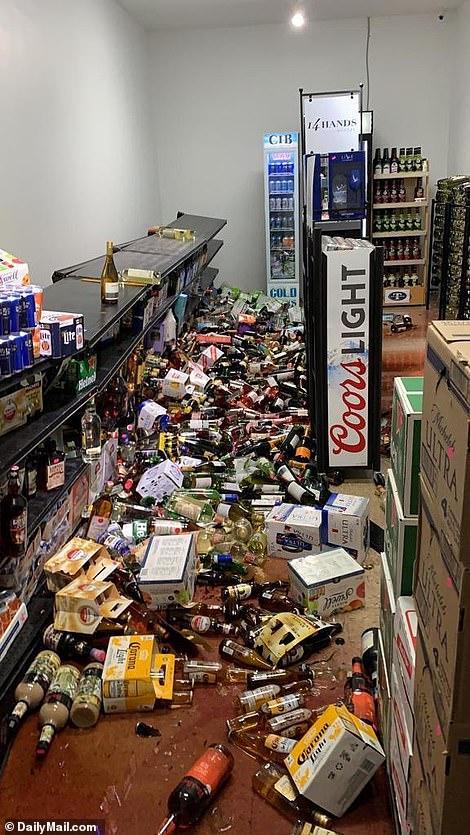 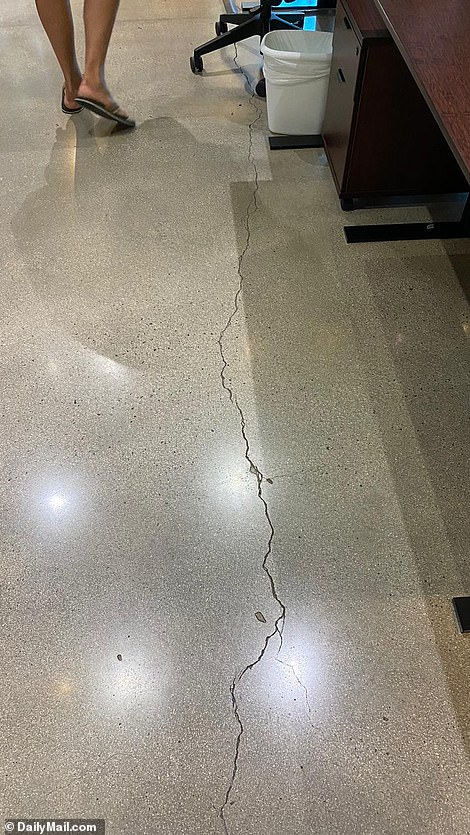 Broken bottles are seen scattered across the cracked floor at a store in Georgetown, Cayman Islands, after the quake hit 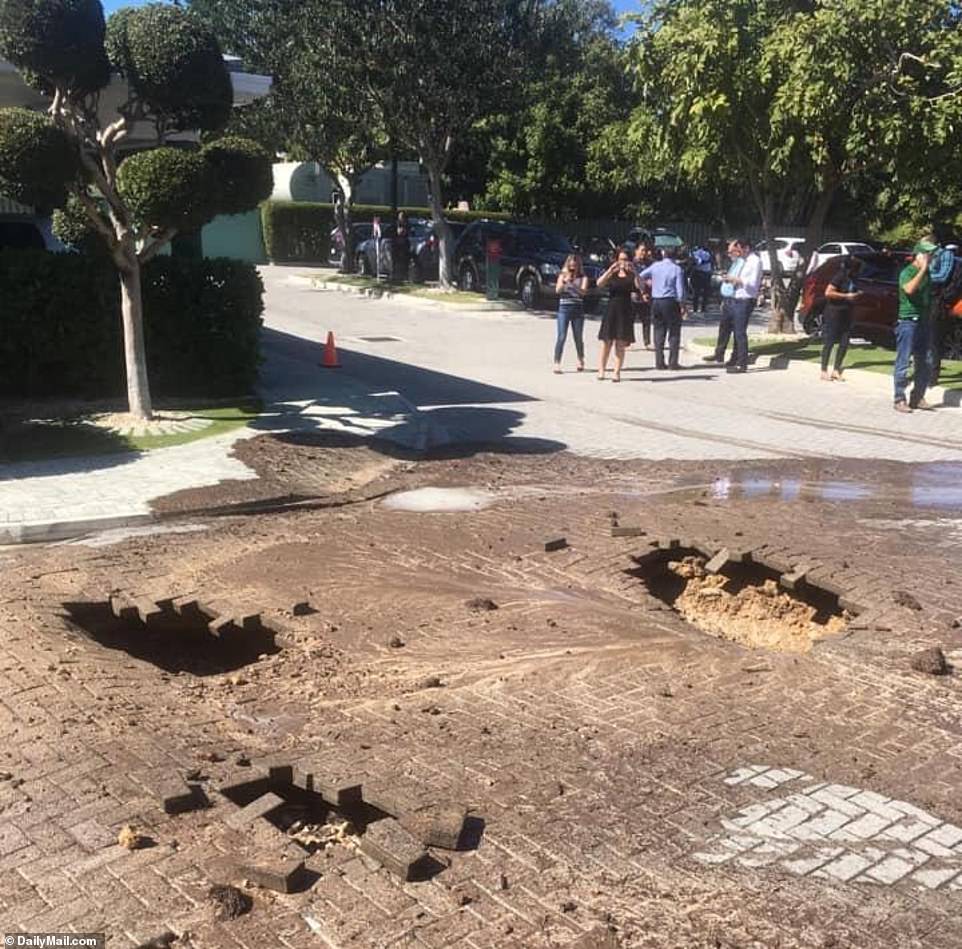 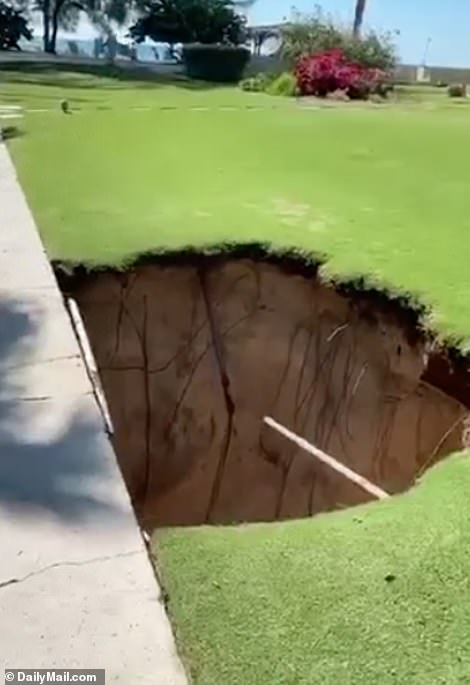 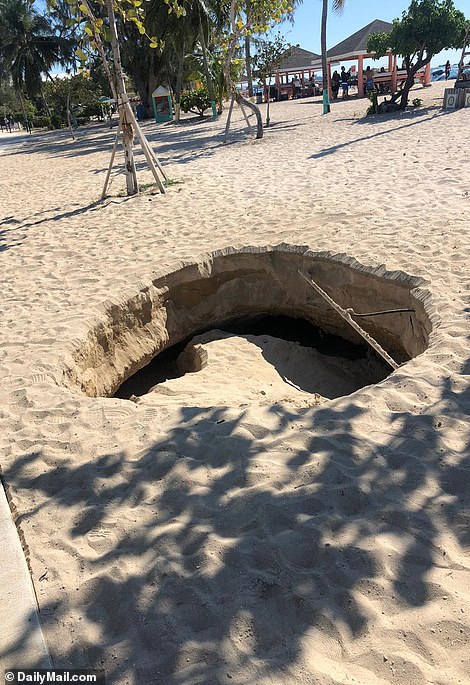 Citizens in Kingston, which is on the far side of the island from the epicenter, reported that they felt tremors for less than a minute.

Claude Diedrick, 71, who owns a fencing business in Montego Bay, about 86 miles southeast of the epicenter, told AP he was sitting in his vehicle reading when the earth began to sway.

‘It felt to me like i was on a bridge and like there were two or three heavy trucks and the bridge was rocking but there were no trucks,’ he said.

Diedrick said he had not seen any serious damage in the area.

Strong shaking was reported in Santiago, the largest city in eastern Cuba.

‘We were all sitting and we felt the chairs move,’ Belkis Guerrero, who work’s at a Catholic cultural center in the heart of Santiago, told AP. ‘We heard the noise of everything moving around.’

Guerrero said there was no apparent damage in the center of the colonial city.

‘It felt very strong but it doesn’t look like anything happened,’ she said. 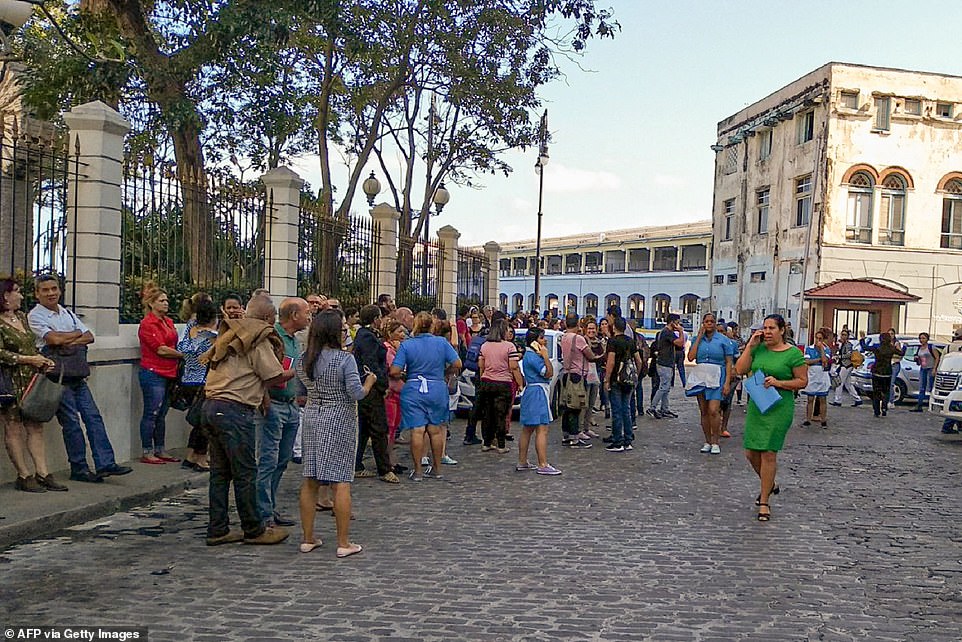 Workers are seen outside the Lonja del Comercio building in Havana, Cuba, after the quake hit 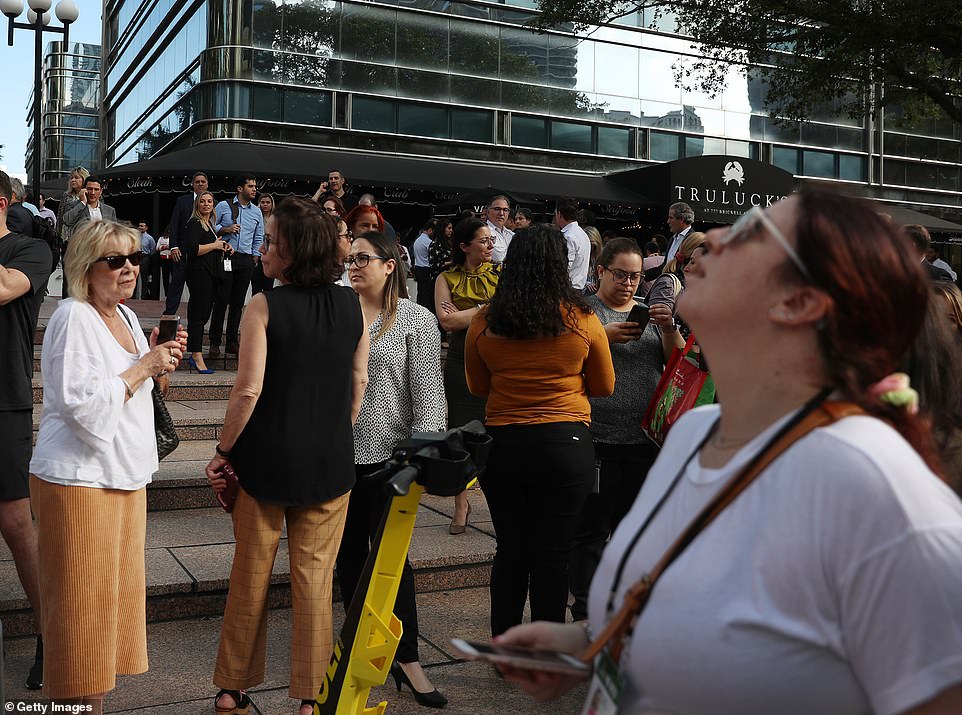 The quake was felt as far away as Miami, where several downtown skyscrapers were evacuated 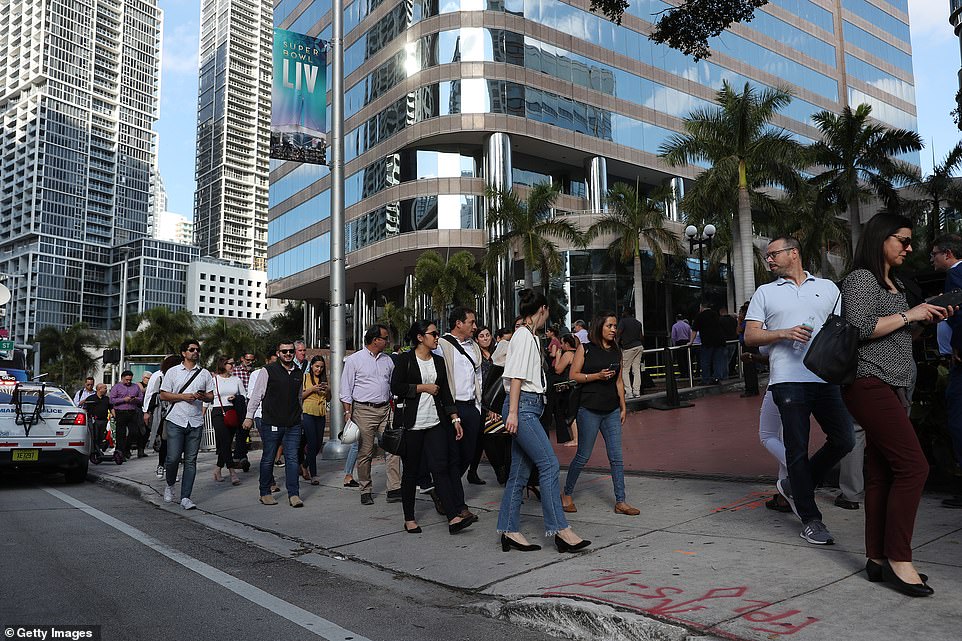 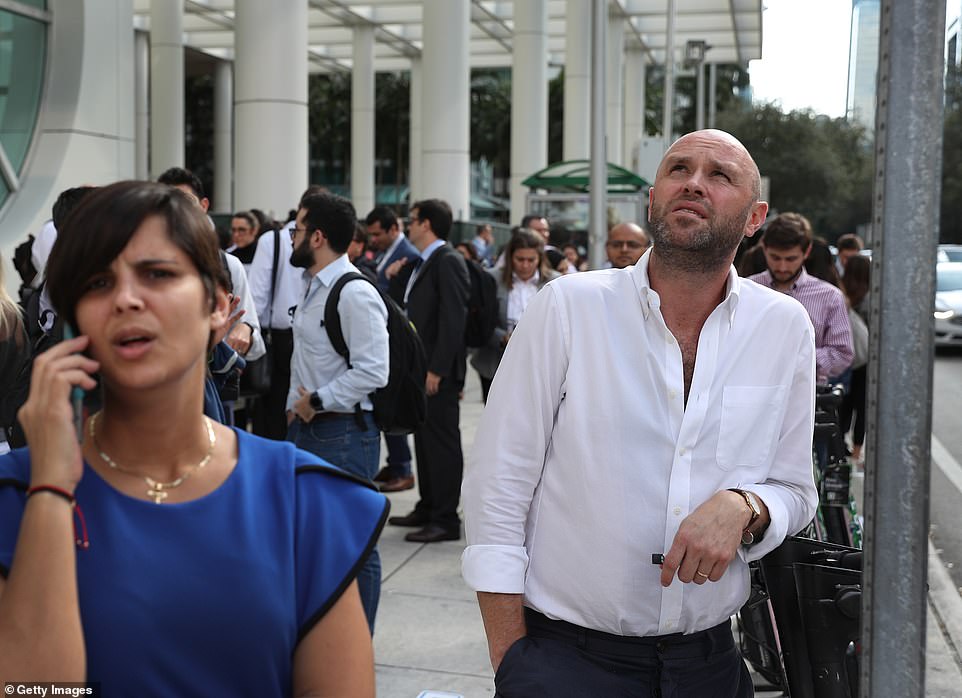 The Cayman Islands Disaster Management Agency warned citizens who are near the shore to ‘evacuate vertically’ as a precaution.

Tremors felt on the island, which sits about 155 miles from the epicenter, reportedly left cracks in the road and what appeared to be sewage spilling from cracked mains.

Dr Stenette Davis, a psychiatrist at a Cayman Islands hospital, told AP she had seen manhole covers blown off by the force of the quake and sewage exploding into the street, but no more serious damage.

USGS initially reported that the earthquake was a 7.3, but it was upgraded after people as far as Miami, Florida, said they felt tremors.

The epicenter was directly on the Cayman Trough, which is part of the Gonave plate.

It was relatively shallow at about six miles below the surface of the ocean, prompting fears of damage as shallower quakes tend to be more destructive.

If the magnitude of 7.7 is confirmed, it would be the largest since an 8.0 quake in Peru that killed two people and injured 30 last May. 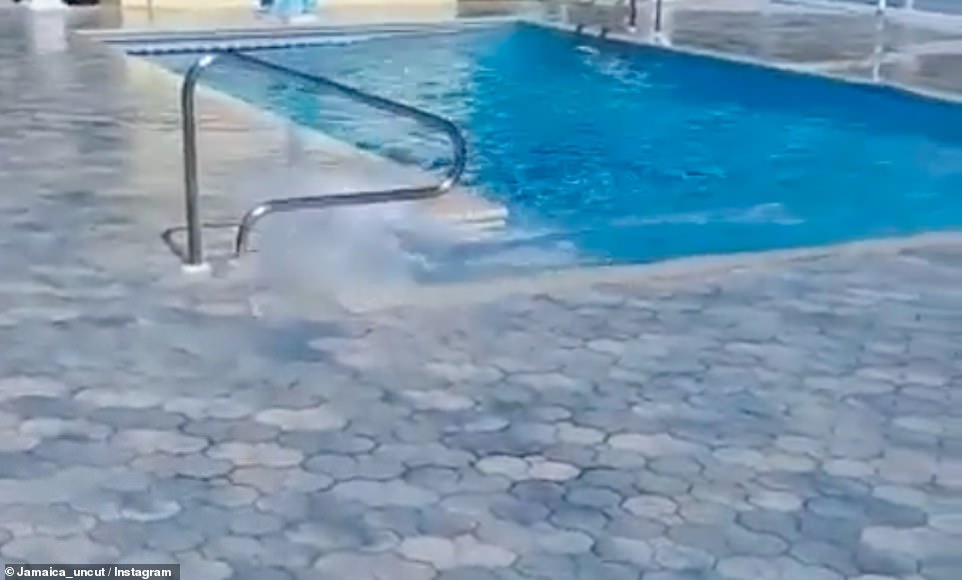