About 70 people at a Christmas-themed lingerie party have been arrested and charged with marijuana possession in Georgia.

Cartersville Police responded to a 911 call about shots fired at the Morgan Square apartments just after 2am on New Year’s day.

A neighbor who had arrived home from a movie was alerted to a sound that he believed was gunshots, but party goers said were fireworks.

Christavious Calloway and Martin Cayd (left, right) were also among those arrested at the party

Police arrived to a jam packed house. Over scanners police commented on how many people were on the porch, and as they walked around back they noted ‘there are quite a few people inside the house.’

They were then faced with the daunting task of getting everyone inside the packed home- outside as they started arrested people on pot charges.

A parent to one of those rounded up by police complained to local WGRZ that had the arrests happened in Atlanta- just 40 miles to the south- the arrestees would have received a $75 ticket- instead of being placed behind bars. 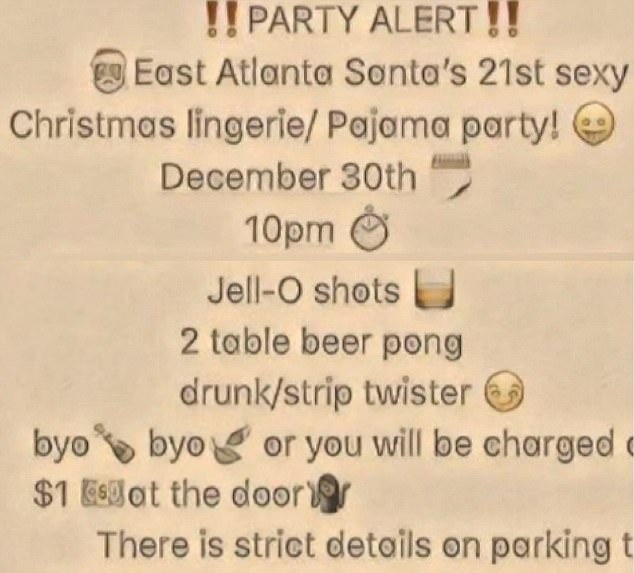 The flyer advertised beer pong and drunk/ strip twister. The pot charge will cost well above the $1 party entry fee

More charges could be added, but for now the partygoers that were rounded up have been placed in Bartow County Jail and so far are facing charges for possession of marijuana under 1 oz.

It’s not clear how much pot police found, but at least 63 people were charged.