Millions of Americans are set to swelter in a surprise late summer heatwave this week.

The National Weather Service has placed swathes of the Midwest and Northeast heat advisories as temperatures hit triple digits.

About 70 million Americans across 11 states are under heat watches, advisories, or warnings, spanning from Arkansas to Maine, through Wednesday.

With humidity, it will feel like it’s over 100 degrees Fahrenheit in much of the eastern United States, as temperatures soar into the 90s.

Millions of Americans are set to swelter in a surprise late summer heatwave this week. A shirtless New Yorker, who is collecting ‘donations for bird seed’ takes a break in the sunshine 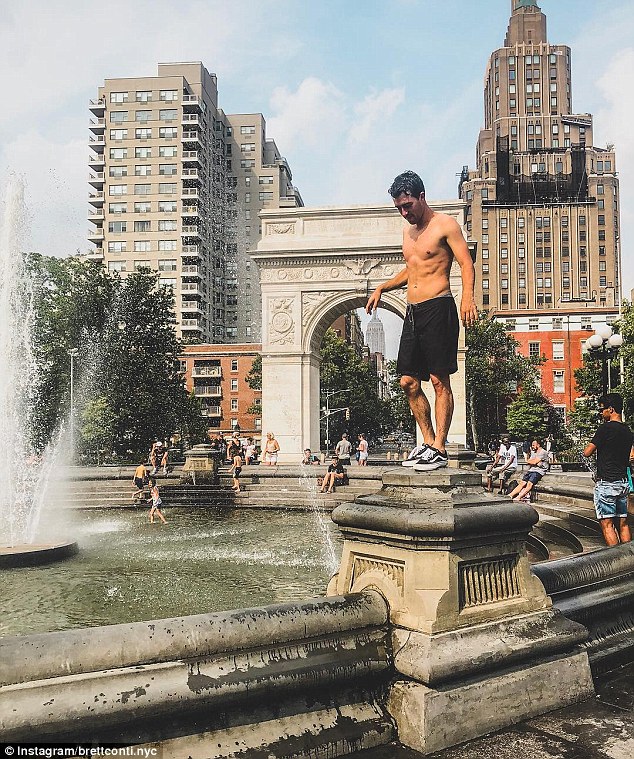 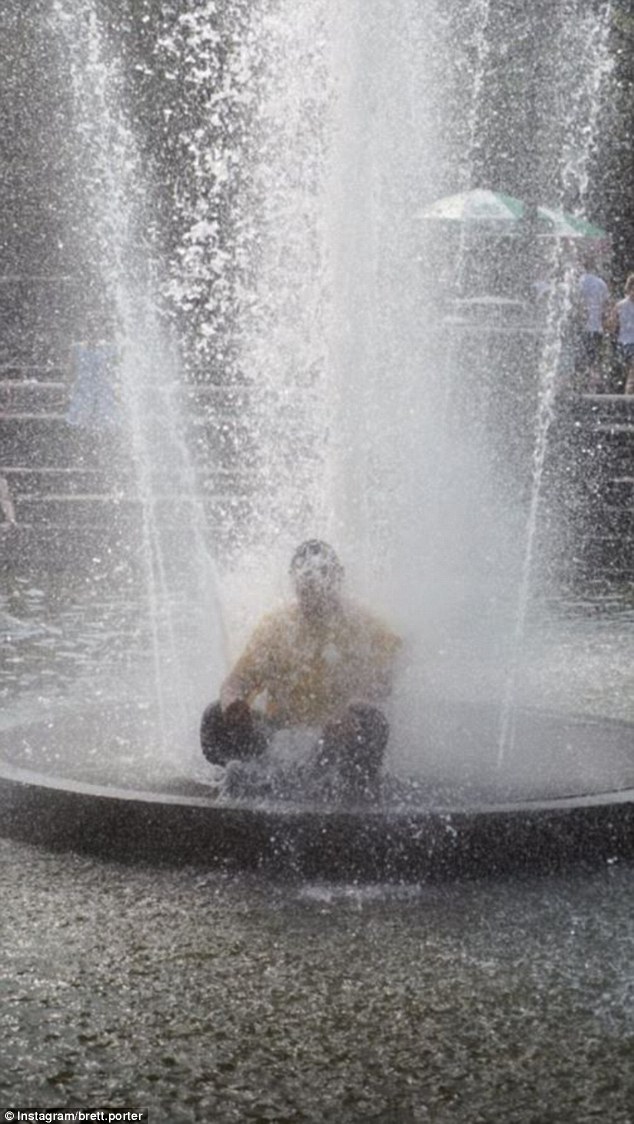 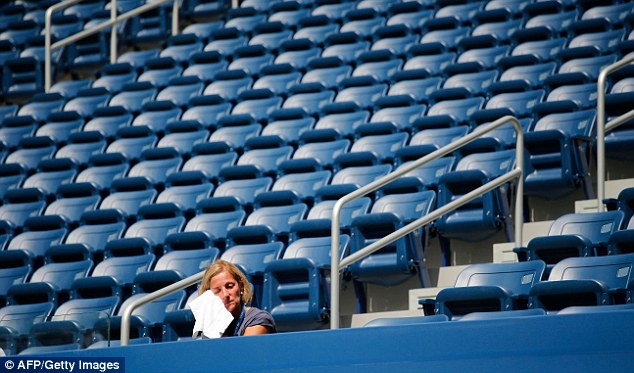 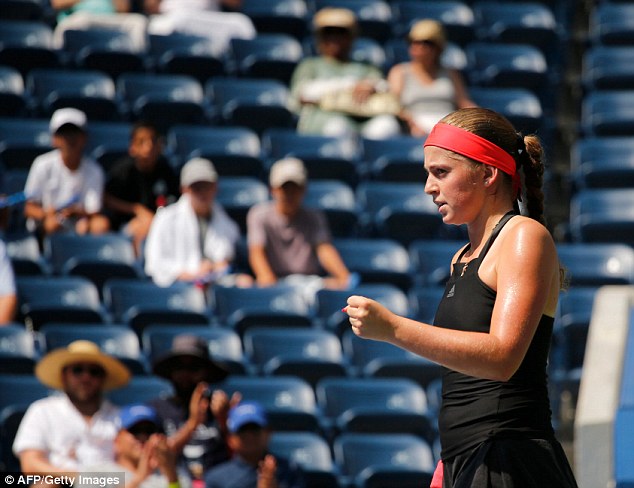 In New York City, where the US Open kicked off on Monday, players and spectators will endure blistering hot and humid weather. Jelena Ostapenko of Latvia pumps her fist while playing Andrea Petkovic of Germany during their 2018 US Open women’s match August 28 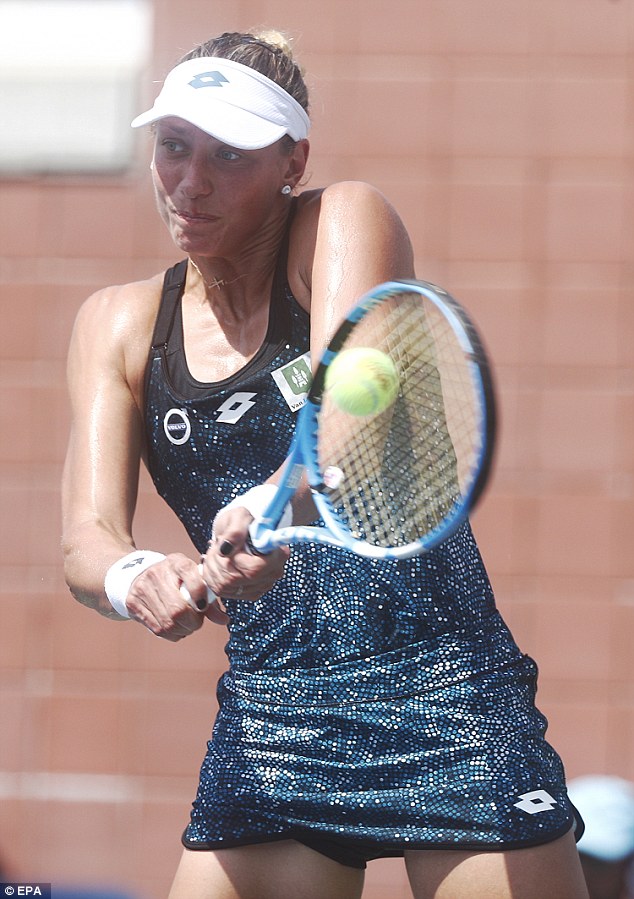 Photos show players covered in sweat on the court and fans wiping away the sweat in the stands. Yanina Wickmayer of Belgium hits a return to Petra Kvitova of the Czech Republic during the second day of the US Open Tennis Championships in New York

‘[Under a heat advisory] the combination of hot temperatures and high humidity will combine to create a situation in which heat illnesses are possible,’ the National Weather Service (NWS) explains.

‘With the school year getting started in many areas, it could be a very uncomfortable few days for students and teachers in schools without air conditioning,’ AccuWeather meteorologist Brian Thompson told USA Today.

Under an excessive heat warning, ‘the heat and humidity may cause heat stress during outdoor exertion or extended exposure. The very young, the elderly, those without air conditioning, and those participating in strenuous outdoor activities will be the most susceptible.’

In New York City, where the US Open kicked off on Monday, players and spectators  will endure blistering hot and humid weather. 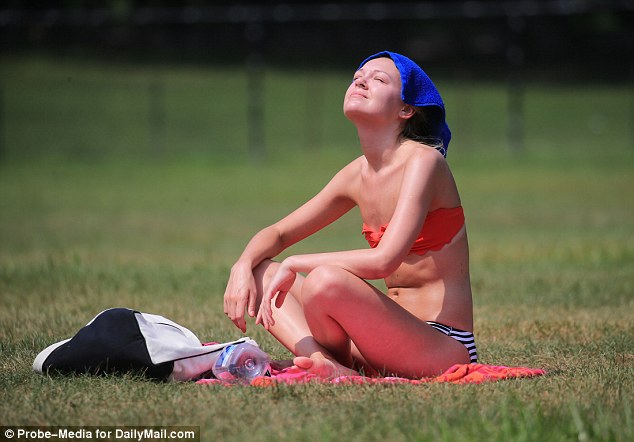 Yana Villarni, 27, was trying to enjoy the sun in Central Park in her bikini but said ‘it was difficult in the heat’ 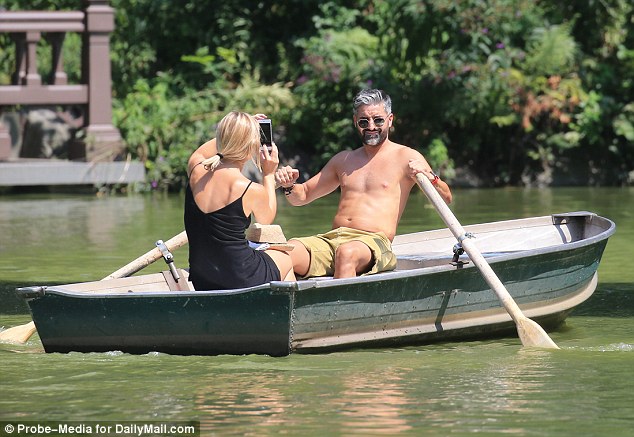 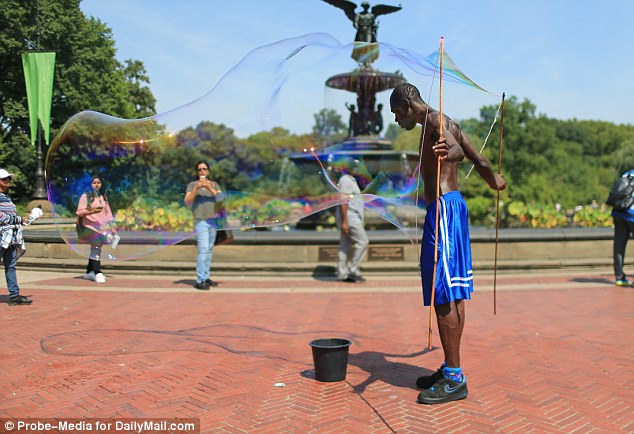 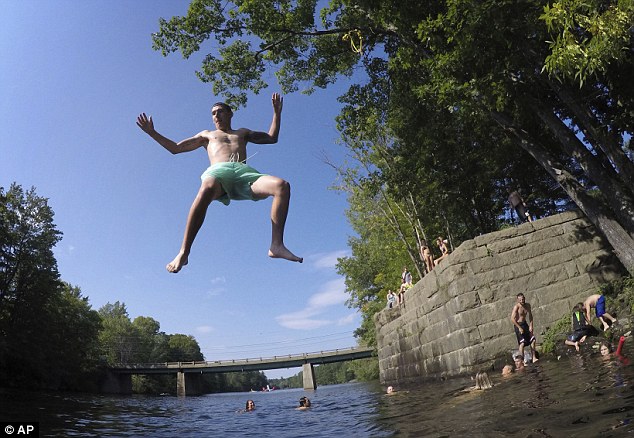 Devin Ledoux, of Parsonsfield, Maine, flies through the air after releasing from a rope swing at the Saco River at Bar Mills in Buxton, Maine, Sunday 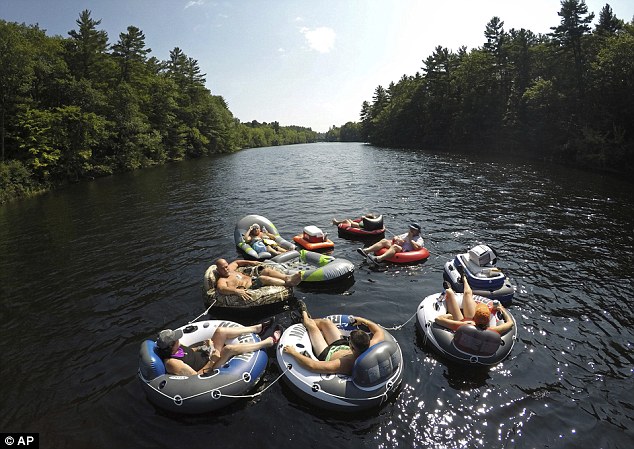 A flotilla of friends from Biddeford, Maine, raft down the Saco River at Bar Mills in Buxton, Maine, over the weekend

Photos show players covered in sweat on the court and fans wiping away the sweat in the stands.

Parts of Missouri, including the St. Louis metro area, are under an excessive-heat warning through 7pm Central on Tuesday. The warning states that the heat can create ‘a dangerous situation in which heat-related illnesses are likely, especially for those living in un-air-conditioned homes or apartments,’ the weather service said.

Meanwhile, a cold front continuing to slowly move east could lead to more severe weather in the Midwest.

‘Drink plenty of fluids, stay in an air-conditioned room, stay out of the sun, and check in on relatives and neighbors. Take extra precautions if you work or spend time outside. when possible, reschedule strenuous activities to early morning or evening. Know the signs and symptoms of heat exhaustion and heat stroke. Wear light weight and loose fitting clothing when possible and drink plenty of water. 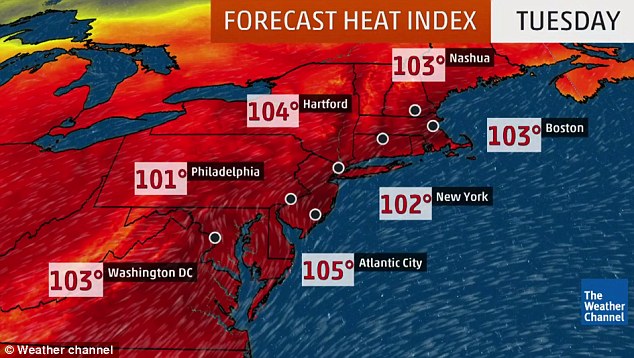 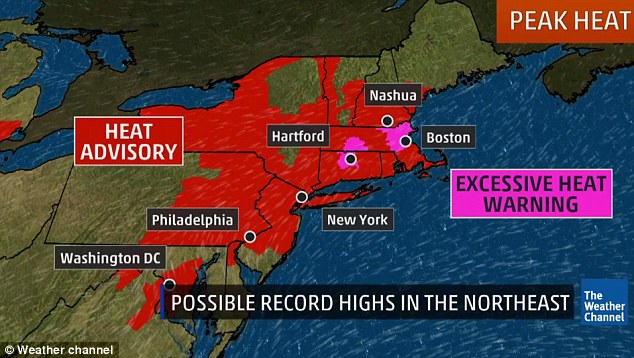 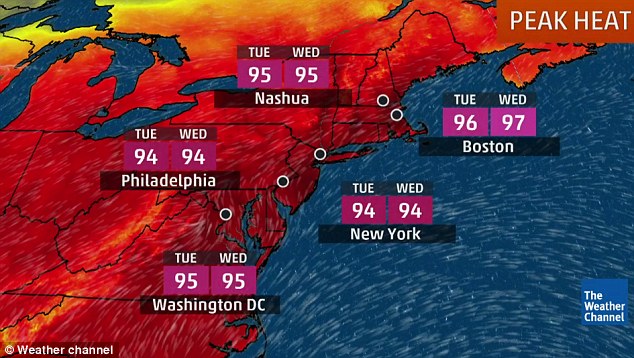 ‘To reduce risk during outdoor work, the occupational safety and health administration recommends scheduling frequent rest breaks in shaded or air conditioned environments. anyone overcome by heat should be moved to a cool and shaded location. Heat stroke is an emergency. Call 911.’

It felt like it was 106 degrees with humidity at the Chicago Executive Airport in Wheeling, Illinois on Sunday, as the temperature tied a record high of 93 degrees, ABC News reported.

The New England states will receive the most intense heat wave, coupled with high humidity, by Wednesday.

An excessive heat watch has been issued for Hartford, Connecticut, and Boston, where heat indices could reach anywhere between 100 and 105.

‘Heat Advisories have been posted across much of Illinois and along the Mid and Lower Mississippi River, as well as across portions of the Northeast and northern Mid-Atlantic,’ the NWS said.

‘Special Weather Statements for heat are also in effect across portions of the Ohio Valley. Heat indices will exceed 100 degrees for many locations today and Tuesday, and some high temperature records may be broken as well.’ 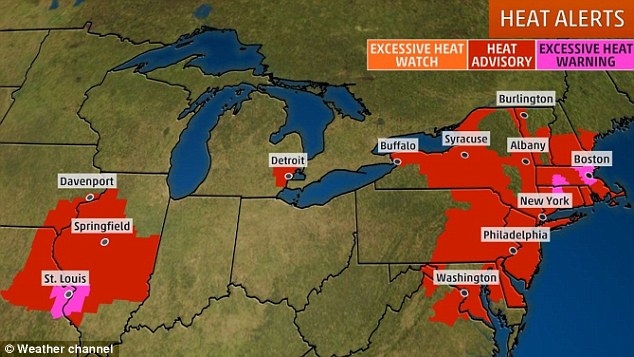 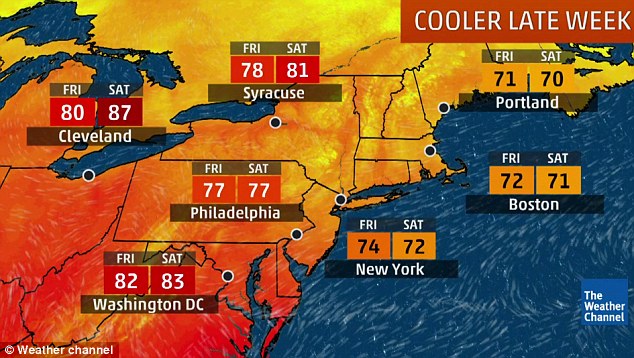 Over the weekend, severe weather struck the Midwest.

A tornado touched down in Indiana, while over 100 damaging storms were reported from the Plains and into the Great Lakes.

In addition to the heatwave in the Northeast, a cold front is expected to continue to move east.

This could create more severe weather on Monday, between Iowa and Michigan.

Damaging winds, hail and an isolated tornado are the most likely threats.

It’s also possible flash flooding may occur in Wisconsin and parts of the Midwest.

Those dangers extend to the area between Kansas and Michigan on Tuesday, as the cold front slows down.

The biggest threat will be damaging winds, though hail is possible.

A few tornadoes are also possible in this area.