Nearly 72 percent of patients are open to using CBD oil to treat their pain instead of prescription opioids and over-the-counter drugs, a new survey found.

Some 100 million Americans are in chronic pain, and a new survey from Remedy Review suggests that the majority (61 percent) of them use prescription drugs to treat it.

Yet as the opioid addiction epidemic continues to derail and even end many lives every year, more and more Americans are considering switching to other less addictive treatment options.

According to the new survey, nearly as many people as take prescription drugs are willing to try non-traditional methods for treating the aches that dog them day in and day out.

Over 70 percent of Americans are willing to try cannabis (green) to treat their chronic pain, a new survey’s findings suggest

While modern medicine has made major gains in our battles against diseases like cancer in the last several decades, chronic pain is pernicious but still treated much the same way today that it was in the mid-20th century.

Opioids like oxycodone are the most common prescription for pain management, but they have also been well-established as the culprit for the beginning of many addictions

In fact, a National Institutes of Health study found that 75 percent of people who started abusing opioids in the 2000s were first exposed to the class of drugs through a prescription painkiller.

It’s a sobering statistic that, coupled with the deaths of tens of thousands of Americans from opioid overdoses, has helped to drive doctors and public health officials to try to curb prescription rates.

Yet, nearly all of the 1,000 people surveyed by the Remedy Review had had enough pain to need treatment, and 61.1 percent of those had used prescription drugs to treat their pain.

For nearly a quarter, the lower back was the source of their pain, whether chronic or temporary.

Treatments should vary for different types and areas of pain, but over-the-counter or prescription drugs are usually the cheapest, fastest and most accessible forms, compared to most alternatives, like physical therapy or electrical stimulation.

According to the new survey, about 43 percent of pain patients did go to physical therapy, but that was still fewer than the number taking drugs.

About one third of people surveyed also said they often forego or supplement a doctor’s help with outside information and their own judgment. 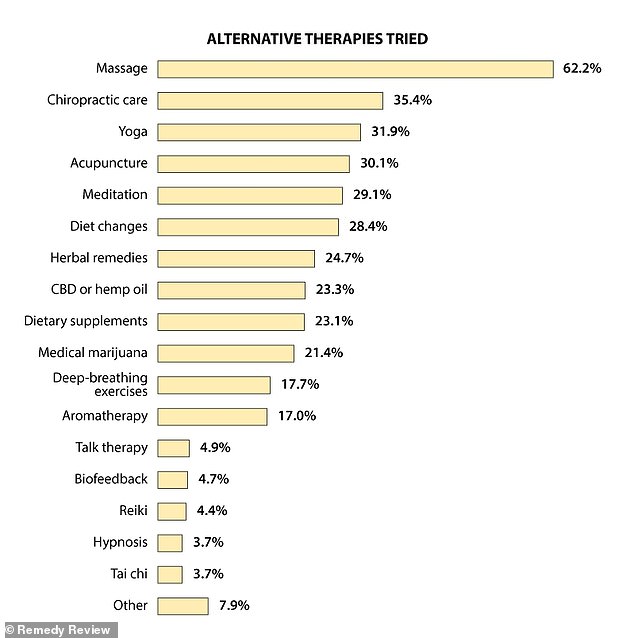 Massage was the most popular alternative medicine tried, but nearly a quarter had tried CBD oil and a similar number had attempted treating pain with medical marijuana

Following those were CBD or hemp oil, which 23.3 percent had tried, dietary supplements and medical marijuana (tried by 21.4 percent).

Many patients, however, might be looking to options that doctors may not recommend as the first line of treatment.

Nearly half of the survey participants thought that alternative pain treatments should be tried before prescription painkillers.

With cannabis being widely used illicitly before the wave of legalization began, many patients are – understandably – hesitant to bring it up to their doctors.

Doctors, too, are not always equipped for that conversation.

Cannabis and its derivatives have been prescribed longest and most broadly for the treatment of cancer- or chemo-related pain, nausea and loss of appetite.

Yet, when 250 oncologists were surveyed about their cannabis knowledge and interactions about it with patients, nearly half of the doctors had prescribed it to them, but less than a third said they felt well-informed on the substance.

It seems that continuing education for medical professionals has not quite caught up to the continuing legalization and patient interest in marijuana.

In 2017, a University of Michigan study, on the other hand, suggested that patients are the ones reluctant to give up on the familiar pain pills in exchange for treatments and practices that are less addictive but also less studied.

However, the latest survey suggests that patients are changing that tune, and eager for their doctors to follow suit, as 71.8 percent said they would consider trying the oil to treat their pain.

And some found these treatments – which they typically found through their own research or the recommendations of friends or family members – better than the prescriptions and traditional treatments their doctors prescribed.