75 years to the day after they were freed from living hell, 200 Auschwitz survivors return

Survivors of the Auschwitz-Birkenau death camp are gathering for today’s commemorations marking the 75th anniversary of the Soviet Army’s liberation of the camp – using the testimony of survivors to warn about the signs of rising anti-Semitism and hatred in the world today.

In all, more than 200 survivors of the camp are expected, many of them elderly Jews who have traveled far from homes in Israel, the United States, Australia, Peru, Russia, Slovenia and elsewhere.

Many lost parents and grandparents in Auschwitz or other Nazi death camps, but today were being joined in their journey back by children, grandchildren and even great-grandchildren.

A member of a delegation of survivors of the Auschwitz concentration camp and their families breaks into tears at the execution wall at the former Auschwitz I site on January 27, 2020 in Oswiecim, Poland 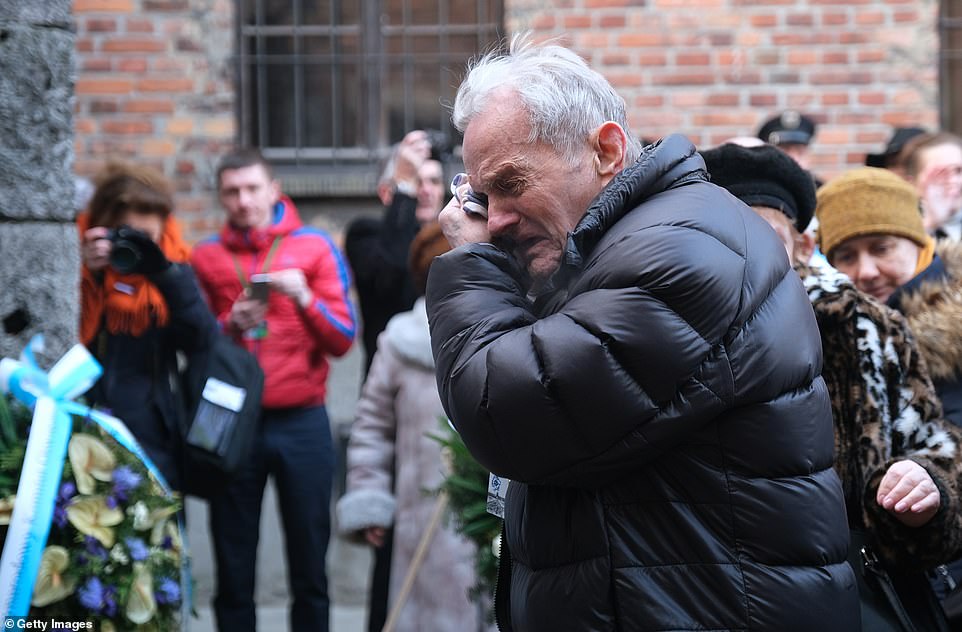 A member of the delegation breaks into tears in front of the extermination wall. Despite it being 75 years since the camp’s liberation the memories are still raw for many of the survivors who not only endured the torture of living through years inside, but also lost many of their loved ones 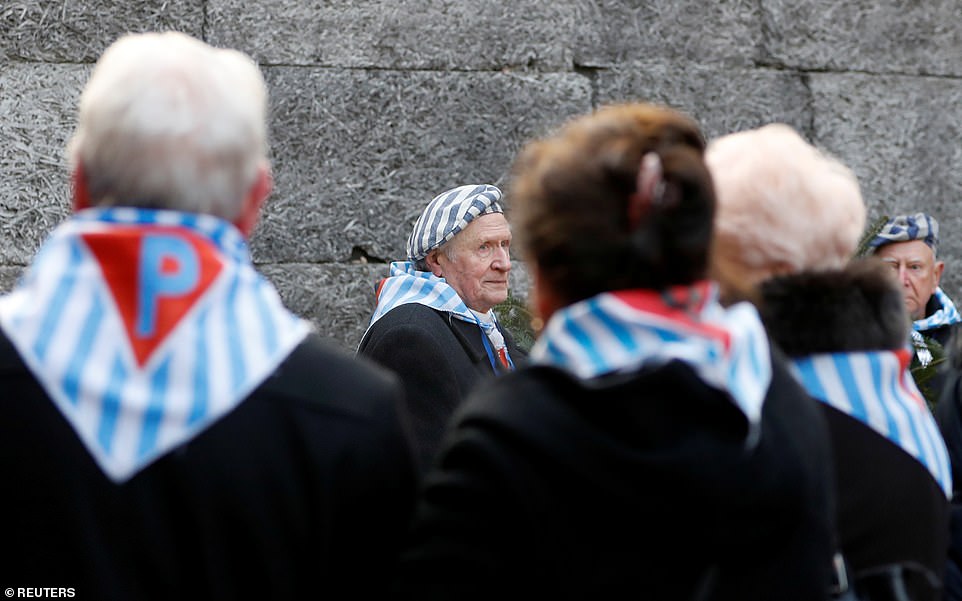 Survivors who gathered at the former Nazi concentration camp shared their harrowing memories of what it was like to be imprisoned during World War II. Many said they returned to the site to keep alive the memories in order that the world would remember and ensure such an atrocity would never happen again 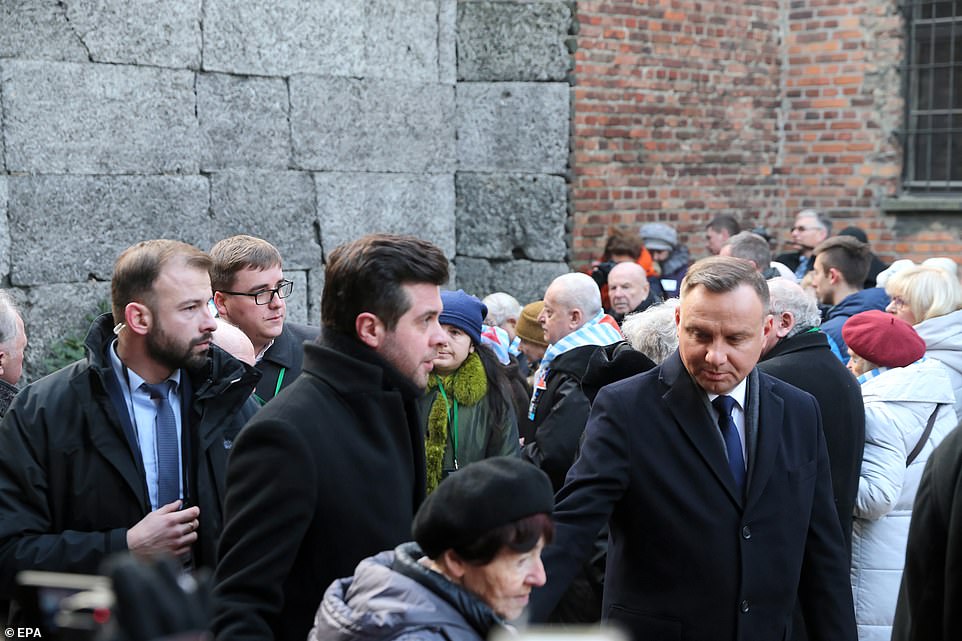 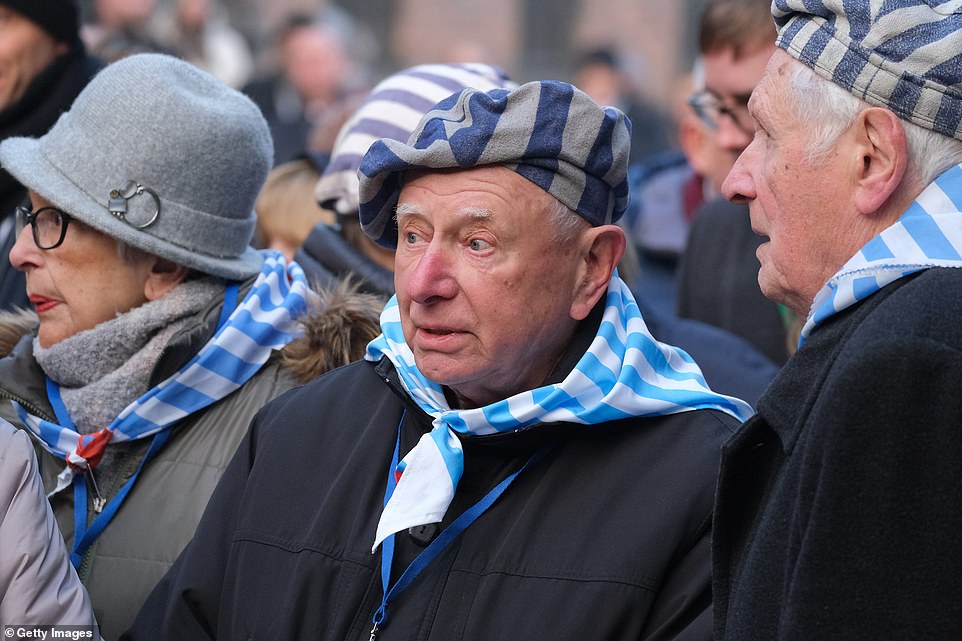 Survivors gather for the ceremony to mark the 75th anniversary of the liberation of Auschwitz. Historians estimate more than one million people were killed inside the prison – many of whom were Jews

Most of the 1.1 million people murdered by the Nazi German forces were Jewish, but among those imprisoned there were also Poles and Russians, and they will also be among those at the commemoration led by Polish President Andrzej Duda and the head of the World Jewish Congress, Ronald Lauder.

World leaders gathered in Jerusalem last week to mark the anniversary in what many saw as a competing observance. 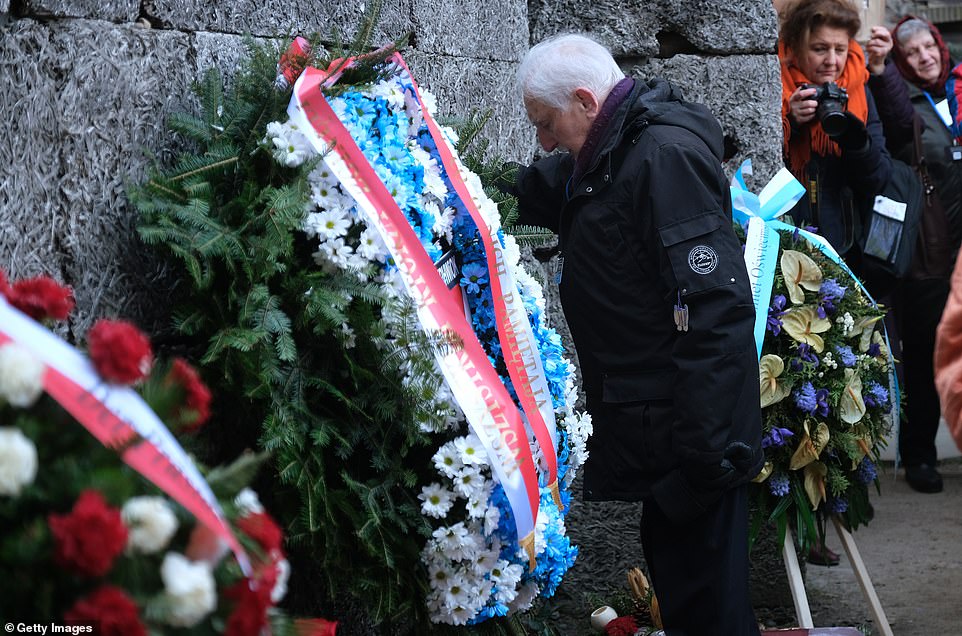 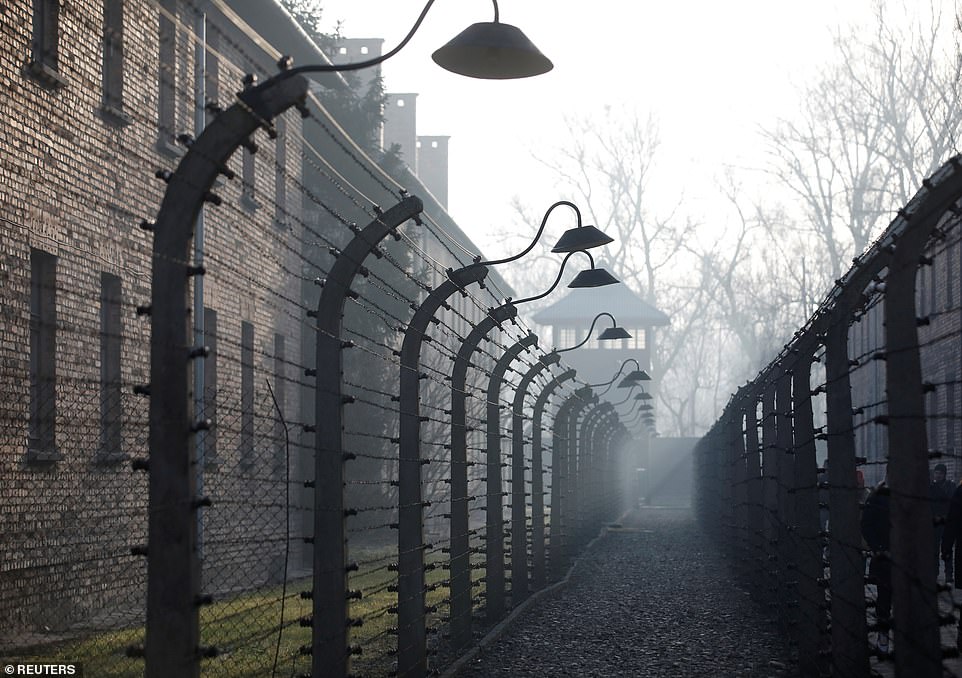 The cold winter’s day cast a gloomy fog over the former death camp where thousands of Jews, Poles and Russians were imprisoned by the Nazis 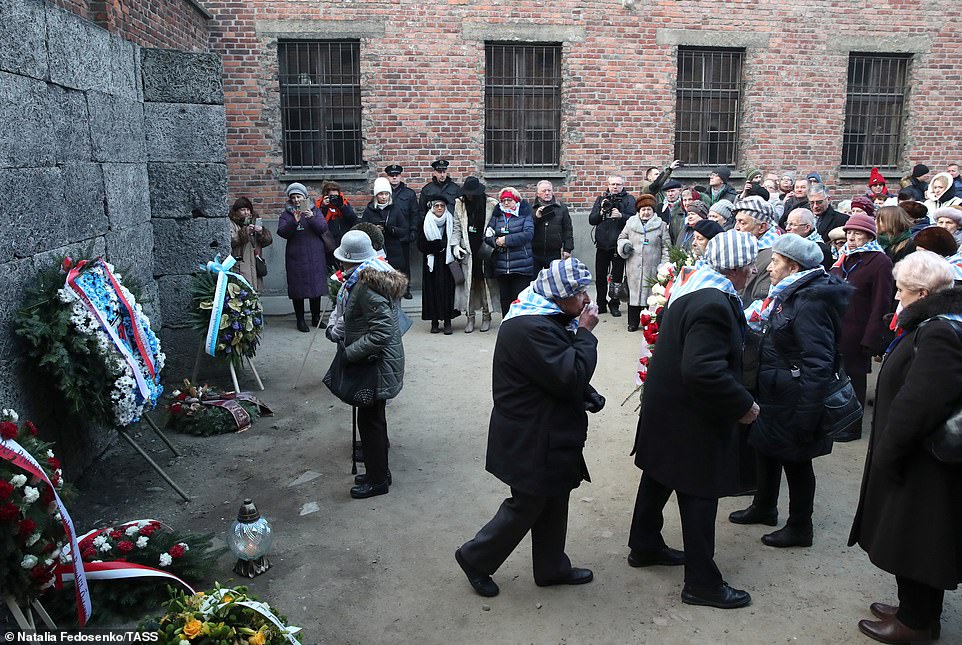 Politics intruded on that event, with Duda boycotting it in protest after Putin claimed that Poland played a role in triggering World War II.

Duda had wanted a chance to speak before or after Putin to defend his nation’s record in face of those false accusations, but was not giving a speaking slot in Jerusalem.

Ukraine’s President Volodymyr Zelenskiy is expected at the event at Auschwitz, which is located in southern Poland, under German occupation during the war. 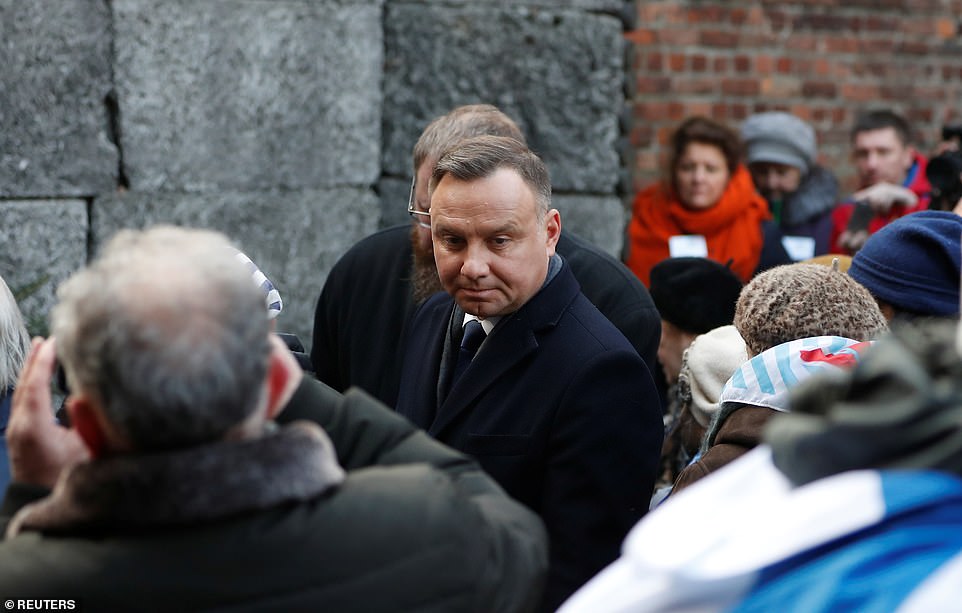 Poland’s President Andrzej Duda, seen at today’s commemorations, boycotted the ceremony in Israel last week after he was not given a speaking slot to defend his country 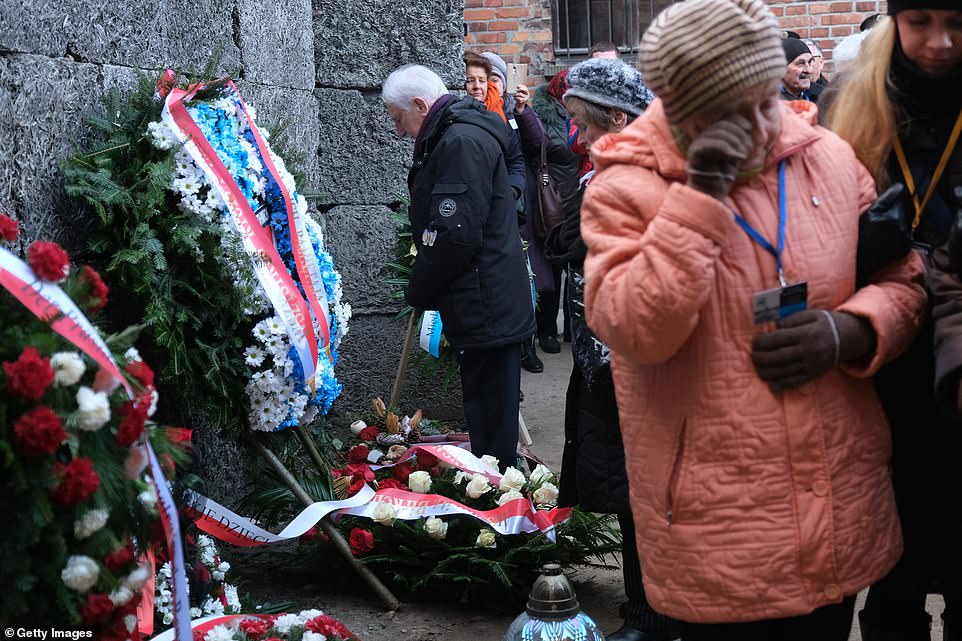 People could be seen bowing their head in contemplation at the execution wall at the former Nazi concentration camp in Poland. Survivors who attended the ceremonies were all aged between 75 and 101 came from all over the world 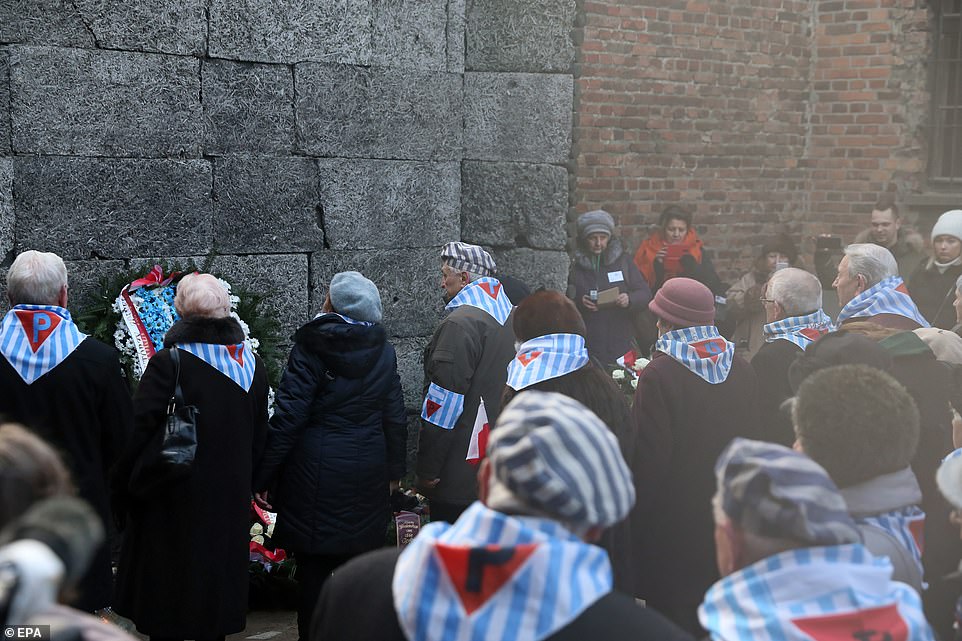 Hundreds gathered on what is also Holocaust Memorial Day, at the site in Oswiecim, Poland to remember loved ones who were killed at the concentration camp. For some it is the only burial site for their parents, grandparents and siblings who were killed in the holocaust

Organizers of the event in Poland, the Auschwitz-Birkenau state memorial museum and the World Jewish Congress, sought to keep the spotlight on survivors.

‘This is about survivors. It’s not about politics,’ Lauder said Sunday, gathering at the death camp with several survivors.

Lauder warned that leaders must do more to fight anti-Semitism, including by passing new laws to fight it. 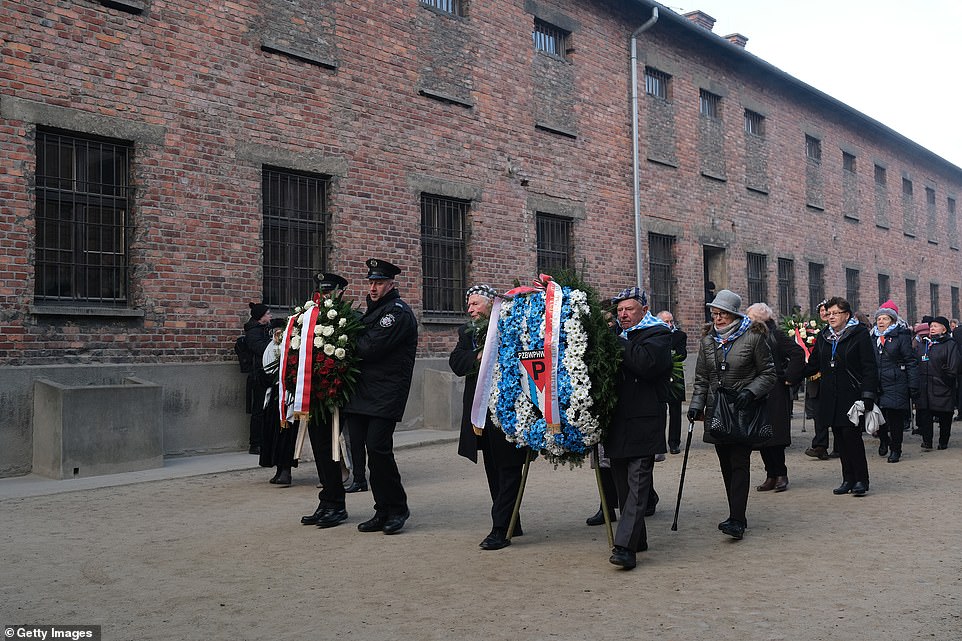 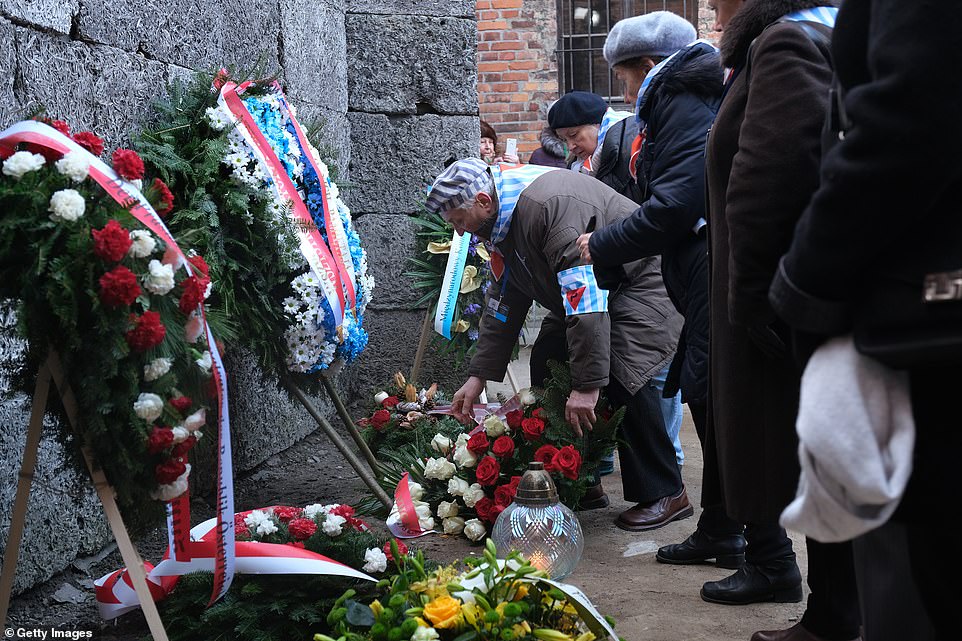 Survivors were supported by each other, and their children and grandchildren, as they lay wreaths at the site where they suffered immense hunger, illness and so often faced death

On the eve of the commemorations, survivors, many leaning on their children and grandchildren for support, walked through the place where they had been brought in on cattle cars and suffered hunger, illness and near death.

They said they were there to remember, to share their histories with others, and to make a gesture of defiance toward those who had sought their destruction. 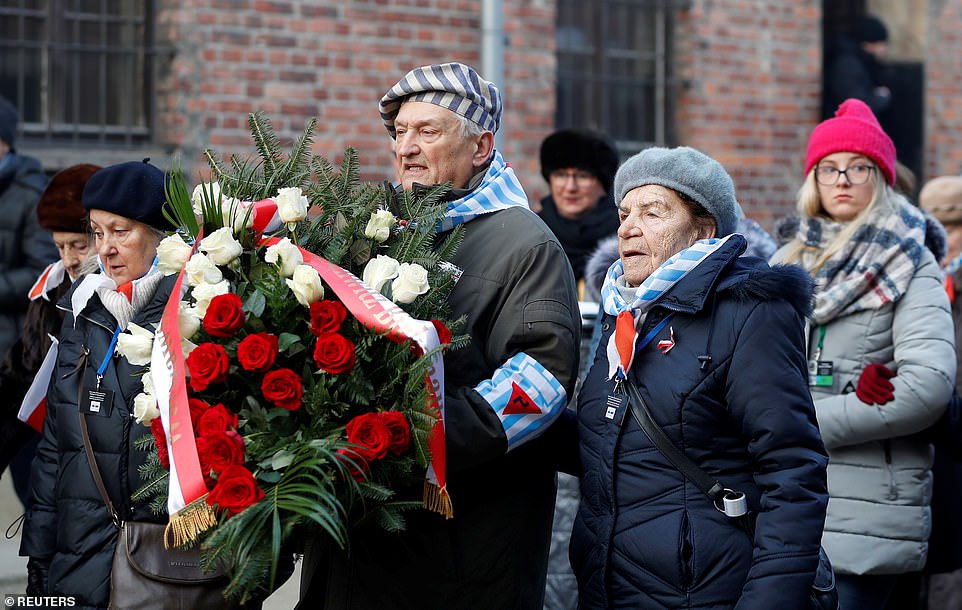 Some 200 survivors of the Nazi camp returned to the place to share their stories with others, to remember those who had gone before and to send a gesture of defiance towards those who had sought their destruction 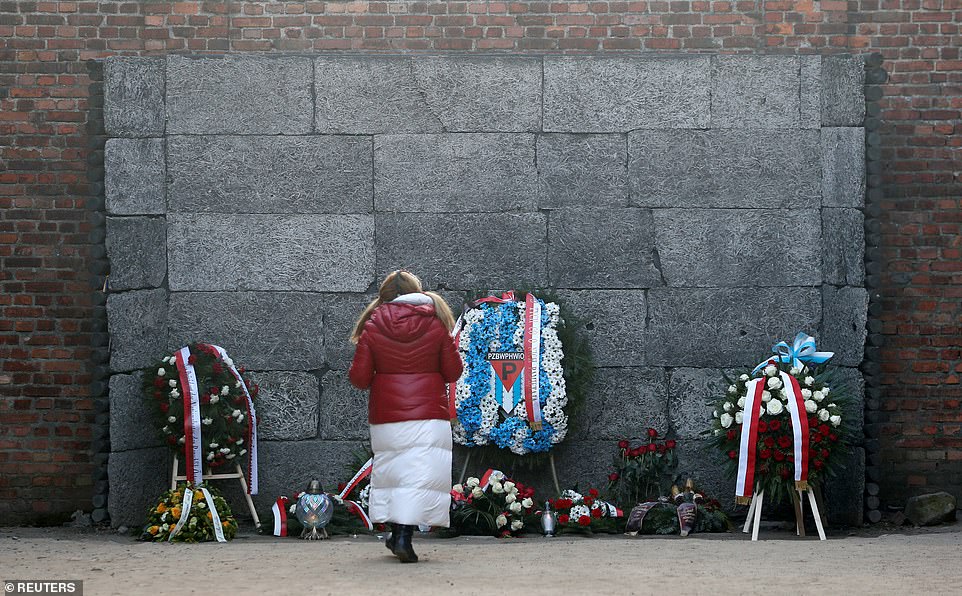 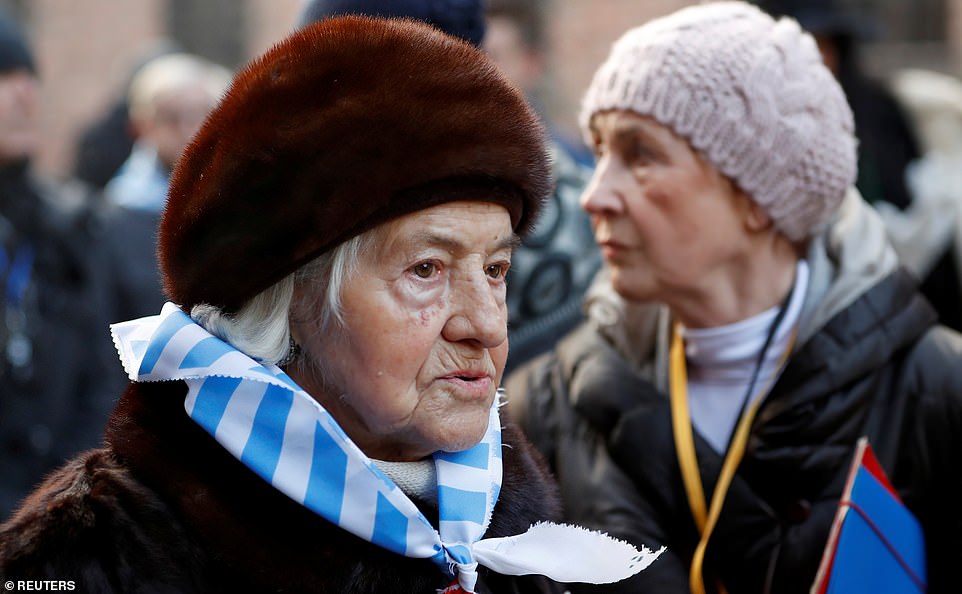 Many of the survivors said they wanted to come to pay homage to those they had lost during the war, as well as to draw the world’s attention to the atrocities as a reminder to not let history repeat itself 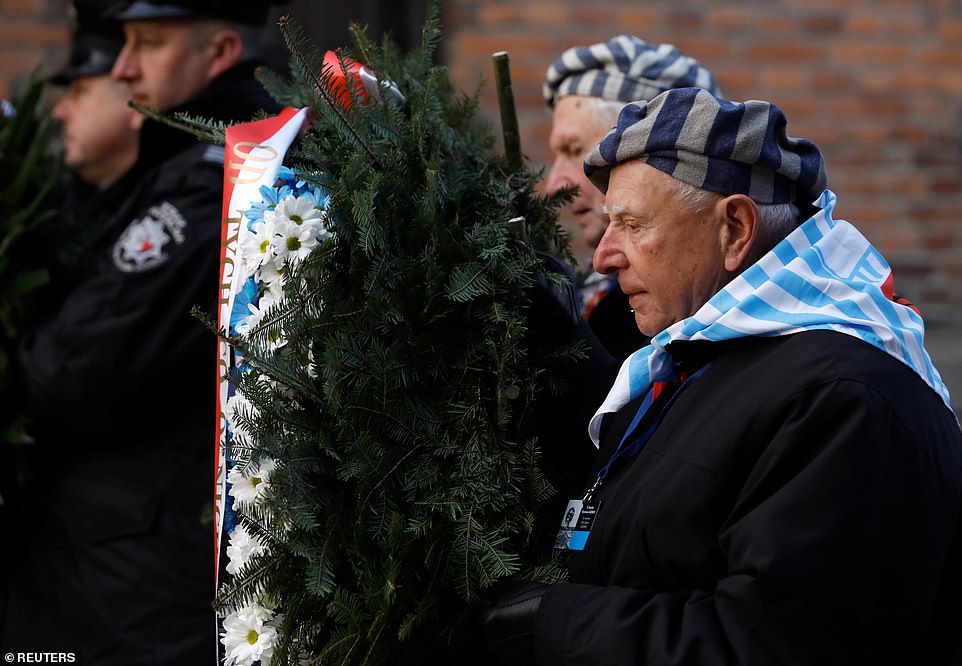 For some, it is the only burial ground for their parents and grandparents, and they will be saying kaddish, the Jewish prayer for the dead.

‘I have no graves to go to and I know my parents were murdered here and burned. So this is how I pay homage to them,’ said Yvonne Engelman, a 92-year-old who came from Australia, joined by three more generations now scattered around the globe.

She recalled being brought in from a ghetto in Czechoslovakia by cattle car, being stripped of her clothes, shaved and put in a gas chamber.

By some miracle, the gas chamber that day did not work, and she went on to survive slave labor and a death march.

A 96-year-old survivor, Jeanette Spiegel, was 20 when she was brought to Auschwitz, where she spent nine months.

Today she lives in New York City and is fearful of rising anti-Semitic violence in the United States.

‘I think they pick on the Jews because we are such a small minority and it is easy to pick on us,’ she said, fighting back tears.

‘Young people should understand that nothing is for sure, that some terrible things can happen and they have to be very careful. And that, God forbid, what happened to the Jewish people then should never be repeated.’ 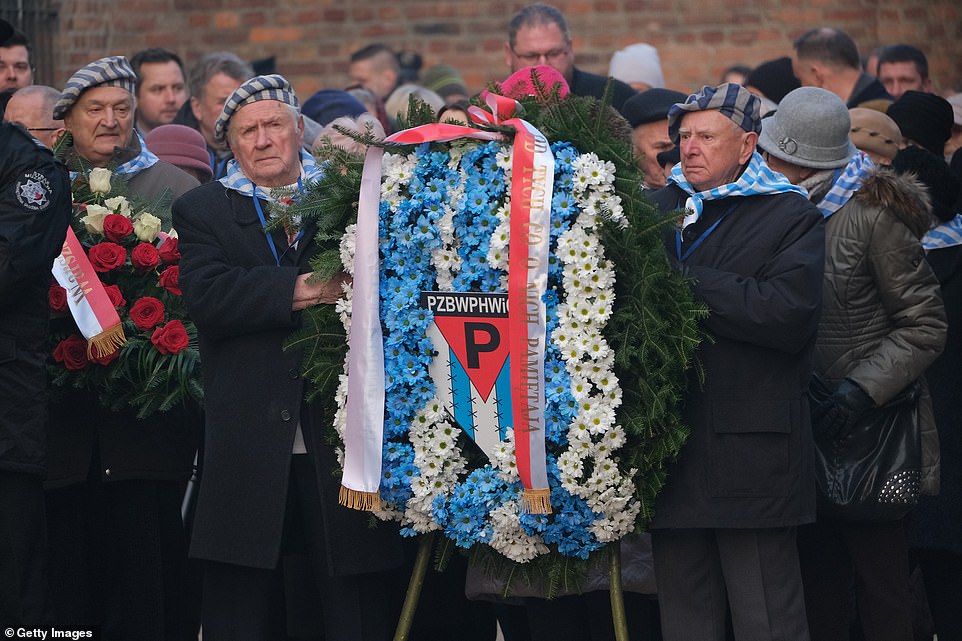 Survivors hold a large wreath that is to be laid at the execution wall in a camp where an estimated one million people were killed. Those who survived shared their stories of being brought in by cattle car, being stripped of clothes and shaved upon arrival at the camp. Some were even sent to the gas chambers, only to survive by chance as the chamber did not work 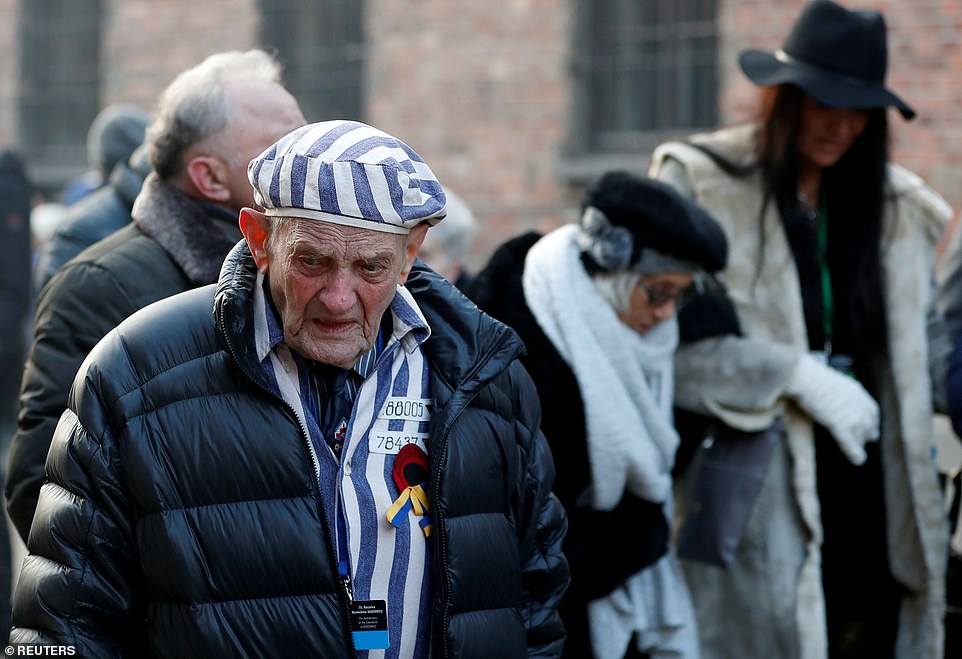 Survivor Igor Malicki, in his nineties, arrives to attend a wreath-laying ceremony at the ‘death wall’ at the camp. Many of the survivors who visited the camp were aged from 75 – an elderly woman who was born in the camp – to 101 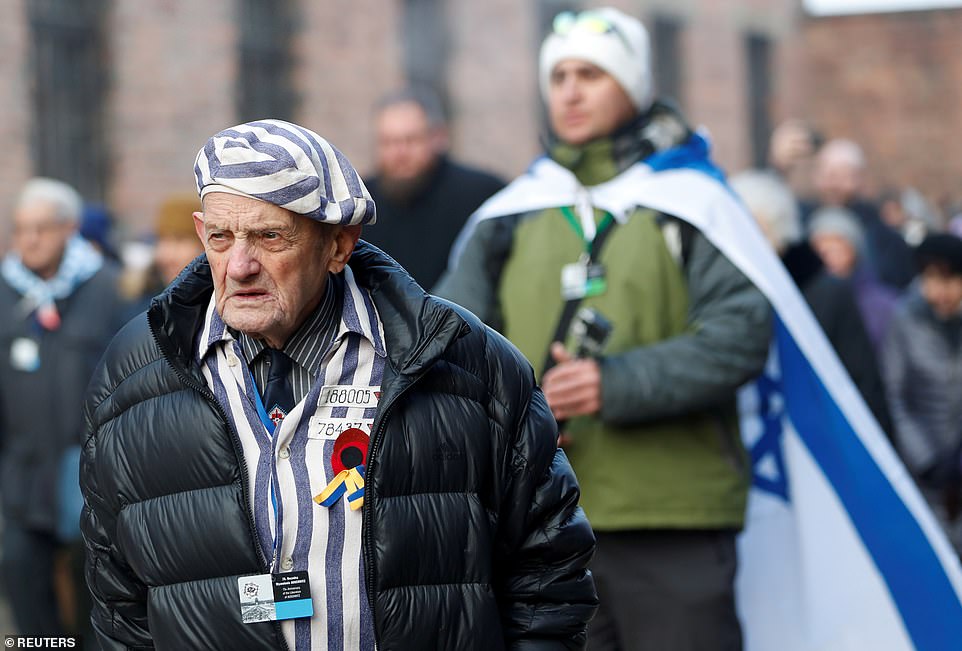 Mr Malicki was 89 when he first returned to Auschwitz, five years ago, at what was the then 70th anniversary of the camp’s liberation

WHAT WAS THE AUSCHWITZ CONCENTRATION CAMP?

Auschwitz was a concentration and extermination camp used by the Nazis during World War Two.

The camp, which is located in Poland, was made up of three main sites. Auschwitz I, the original concentration camp, Auschwitz II-Birkenau, a combined concentration/extermination camp and Auschwitz III–Monowitz, a labour camp, with a further 45 satellite sites.

Birkenau became a major part of the Nazis’ ‘Final Solution’, whereby they sought to rid Europe of Jews.

An estimated 1.3 million people were sent to the camp, of whom at least 1.1 million died – around 90 percent of which were Jews.

Since 1947, it has operated as Auschwitz-Birkenau State Museum, which in 1979 was named a World Heritage Site by Unesco.

Auschwitz was an extermination camp used by the Nazis in Poland to murder more than 1.1 million Jews

Since 1947, it has operated as Auschwitz-Birkenau State Museum, which in 1979 was named a World Heritage Site by Unesco