Anyone who has ever repeatedly pushed the ‘door close’ button on an elevator and thought, ‘It’s like this thing doesn’t actually work,’ is about to feel vindicated — or very, very frustrated.

This weekend, Redditor ‘remydesp’ shared a photo on the social site of an elevator that he’d encountered, in which that ‘door close’ button had fallen off.

But behind it wasn’t a gaping hole into the control panel, with loose wires or a even a smaller button. In fact, there was nothing at all.

A fake! A Redditor shared this picture of an elevator in which the ‘door close’ button has popped off, revealing nothing behind it 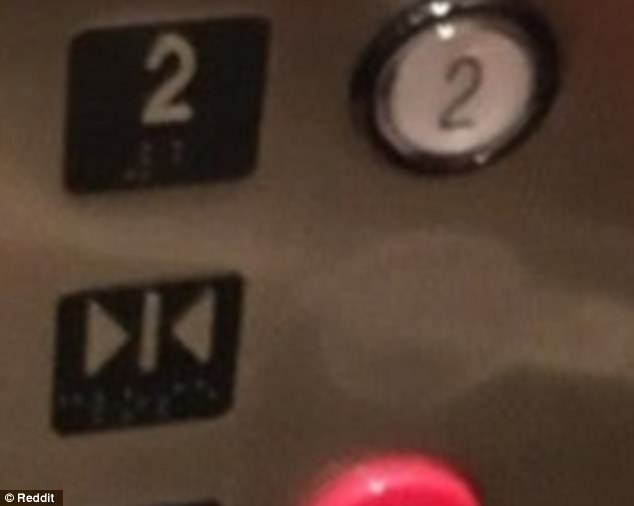 Mystery: The image revealed that the button was simply stuck on, and was not actually connected to any wires that would cause it to do anything

‘The close-door button fell off, revealing it was never connected to the control panel,’ remydesp titled the picture.

The image shows an elevator with buttons for nine floors, as well as all the customary buttons on the bottom. But while the ‘door open’ button is still there, the button next to the ‘door close’ symbol has fallen off.

Behind it is simply smooth metallic elevator wall.

The image has stirred up mild outrage and surprise among commenters, who’ve asked, ‘Oh my god. How much of the world is like this?’

‘I KNEW THOSE BUTTONS DIDNT DO ANYTHING,’ wrote another.

But while the idea that this ‘door close’ button never actually worked was upsetting enough, it turns out many of those buttons don’t work.

Just try! New York City’s crosswalk buttons haven’t worked since the ’60s, when the city installed a computerized system for the lights

He added that most newer elevators are programmed to work based on the traffic patterns of a building — for example, they’ll know that around 9am there is a lot of traffic, so elevators will be sent to the ground floor quickly rather than parking at the last stop.

Giving people the power to close the doors at will would throw off the patterns: ‘All you’re doing is screwing up our timing by touching that thing.’

‘We like watching people just keep pressing a stupid button and not knowing,’ he added with a laugh.

Door close buttons in elevators aren’t the only ones that don’t work, either.

The door buttons on the London Underground do nothing — or at least, they haven’t since 1999, when it was determined that having control over the doors did more harm than good, even contributing to injuries.

And in several places — including New York City — the buttons that are meant to change the lights at a crosswalk are also useless.

Though they used to work, in 1964 the city adopted a computerized timing system for traffic lights to help traffic flow, which cannot be disrupted by pedestrians.