80% of women with high breast cancer risk are not screened

More than eight out of 10 women at high risk of breast cancer are declining screening, warns new research.

Doctors believe the reason may be they are ‘too busy’, rather than a fearing of what an MRI scan might show up.

Earlier this week a study, led by Cambridge University researchers, found one in five women are in greater danger of getting the disease because of their genes.

These include the BRCA1 mutation which persuaded actress Angelina Jolie to have a mastectomy.

Now a study of US women who were at least a fifth more likely to develop a breast tumor in their lifetime due to genetic factors found they were not more motivated to be checked – even when it was free.

Doctors at Madigan Army Medical Center in Washington believe the reason may be they are ‘too busy’, rather than fearing what an MRI scan might show up (file image)

Breast cancer is a leading cause of premature mortality among US women – indeed, one in eight women in the US and UK will develop the disease in their lifetime,

Early detection has been shown to be associated with reduced breast cancer morbidity and mortality.

Oncologist Dr Vance Sohn, of Madigan Army Medical Center, Washington, said the numbers failing to be screened may be even higher in the general population.

He said: ‘In the interest of helping more women be screened earlier for breast cancer, we were intrigued about what this preliminary study identified – that 85 percent of women with a 20 to 24 percent lifetime risk still did not pursue high risk surveillance.

‘Ultimately, the question we are really trying to answer is why women at high risk for breast cancer are declining MRI screening. That issue is the next phase of this study.’

His team plan to find out why, on an individual basis, women are declining this cancer check.

BRCA1 is the so-called ‘Jolie gene’ that led Angelina Jolie to undergo a preventative double mastectomy and hysterectomy. 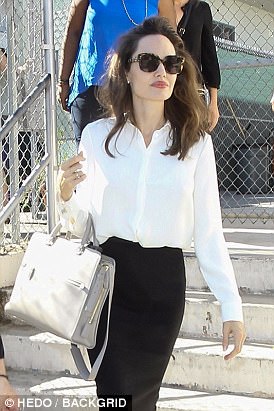 The Jolie gene: Angelina famously spoke about her mastectomy after testing positive for BRCA1, which increases a woman’s risk of developing breast cancer

They suspect it may be a time issue instead of confusion about the screening tool – or being afraid of finding out they have cancer.

Dr Sohn said: ‘If we understand the reason behind this circumstance, it will help us better target those who would benefit from this imaging modality so we could provide clear explanations about the test.

‘The general sense is patients are just too busy, but discovering the reason will be a very important piece to this puzzle.’

Dr Sohn, said he does not think their findings are unique to the military.

He said: ‘In fact, I imagine our compliance rate is even higher than most. Within the civilian health care system, there are fiscal implications such as the cost of the MRI and future health insurance implications, that we are controlling for.’

Earlier MRI screening is recommended for women with genetic predisposition to breast cancer, or personal or family history of the disease.

But the study presented at the American College of Surgeons Clinical Congress in San Diego found the vast majority of these women choose not to get it.

Lead author Dr Sohn said: ‘The military health system is an equal access, no cost system. This system allows us to study how well we are doing in terms of truly adhering to the current recommended guidelines for screening of breast cancer.’

His researchers analysed data on 1,057 women who had a 20 percent or greater lifetime risk of developing breast cancer.

The screenings were offered based on their high-risk status, and not because of mammography results. Between 2015 and 2016, these women were offered MRI screenings.

Overall, only 23 per cent – 247 of the women – underwent MRI screening. Furthermore, just 15 per cent of women with a 20 to 24 per cent lifetime risk of breast cancer had an MRI.

A quarter (24 percent) of those with a 25 to 29 percent risk got the imaging test, while just over a third (36 percent) with a 30 to 39 percent risk sought one. And only half with more than a 40 percent took the advice.

In general, when it comes to breast cancer screening more is not necessarily better. In the past, the misuse of screening MRIs has created much anxiety in women, leading clinicians to perform further testing for tiny spots that turn out to be benign.

To target patients for appropriate testing, clinicians and patients alike need a full understanding of the pros and cons of MRI screening. Clinicians then can develop personalised screening plans.

What the study does highlight is that the appropriate application of this imaging technology is very important, said Dr Sohn.

He added: ‘So maybe the 20 to 24 percent lifetime risk isn’t really appropriate, maybe it should be even higher than what the organisations are recommending. In other words, what is the appropriate cut off?

‘Ultimately, that is really what we are trying to decipher.’

Breast cancer is the most common form of the disease among women. More than 55,000 cases are diagnosed each year in the UK, with it claiming around 11,500 lives annually.