900-mile wide Storm Alex is to set to batter Britain

Bleak-end! 900-mile wide Storm Alex is to set to batter Britain with up to two inches of rain, 65mph gales and 24ft waves ahead of a weekend washout

The first named storm of autumn will batter Britain from tonight with 65mph winds, 24ft waves and two inches of rain – bringing ‘dangerous’ driving conditions and flooding with a washout weekend on the way.

The 900-mile wide Storm Alex, named by the French Met Office, will bring heavy downpours to the UK from the early hours of tomorrow, with the worst conditions expected across southern England from Cornwall to Kent.

The Met Office has issued a rain and wind weather warning from 3am until 8pm tomorrow with forecasters saying spray and large waves could affect coastal areas and there might be delays to public transport.

Forecasters said the combination of wind and rain, along with trees losing their leaves, will increase the risk of flooding due to blocked drains and watercourses – but the severe conditions will ease from the south later on. 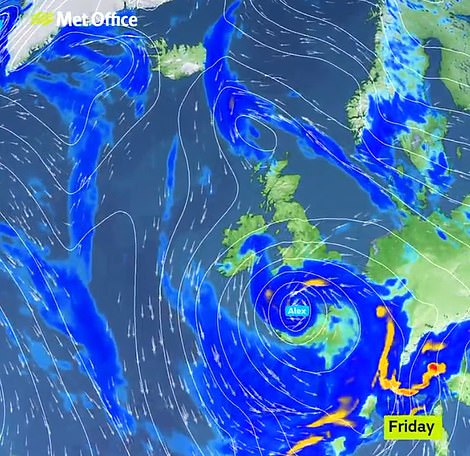 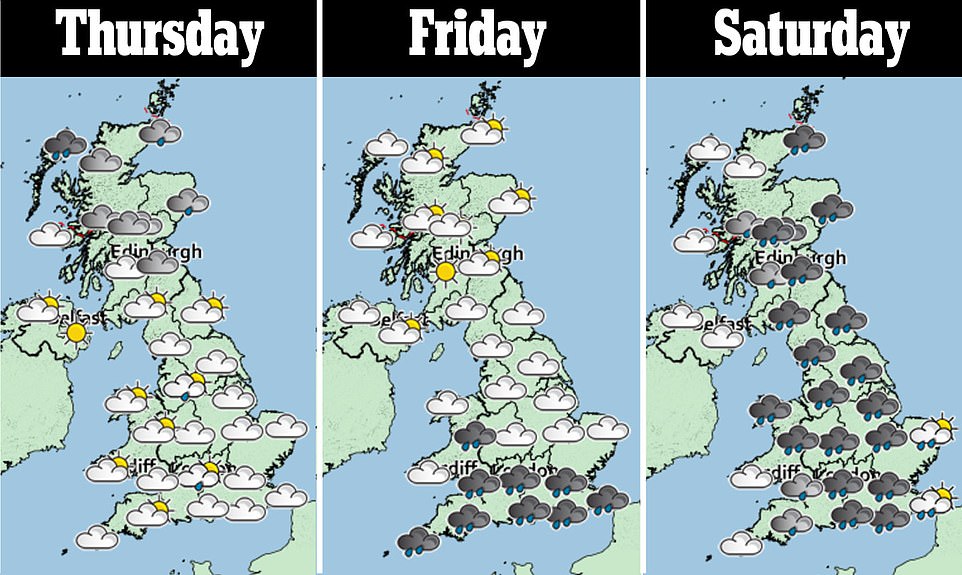 In northern areas tomorrow, there the chance of some wet and windy weather, too, although sunny breaks are also predicted. It follows an earlier band of rain which moved across the country yesterday.

Today is expected to be dry and sunny but there is a chance of isolated showers. Further heavy rain is expected to arrive on Saturday, moving in from the west, followed by sunshine and showers on Sunday and Monday. 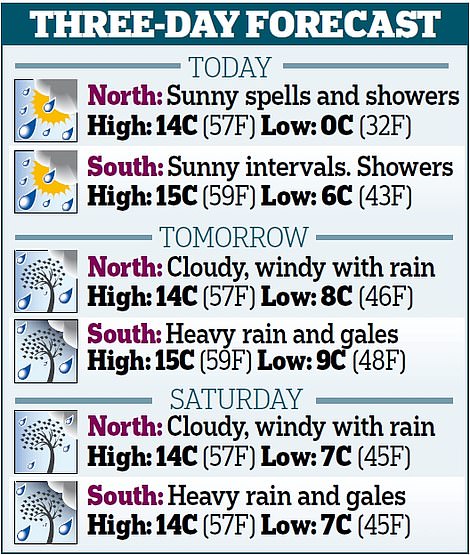 Met Office forecaster Simon Partridge said: ‘The main winds and first rain will really only affect England but by the time we get to Saturday the east of Scotland will see the first effects.

‘The rain associated with the storm will push in mainly from the east, which is quite unusual. Sunday will be quite an unsettled day but it is constantly changing. There will be spells of rain.’

Unsettled weather is forecast to continue until the middle of the month, according to the Met Office.

Its forecast states: ‘An unsettled picture is likely for this period, with all parts of the country seeing showery spells as well as times of more prolonged rainfall.

‘Southern and western areas are expected to see the worst of these conditions with the most frequent and heaviest rainfall. Drier and calmer conditions could be seen at times, but likely only for short interludes.

‘Largely windy for most of the country during this period, with a risk of gales at times, particularly along western and south-western coasts. Overall, it is likely to feel rather cold.’

A drier spell, with the chance of sunny days but fog and frost by night, is not expected until the second half of the coming month.