The new analysis of CDC data, published today, is the first to quantify the drug epidemic’s impact on under 20s in the US.

Since the turn of the century, the rate of American children killed by drugs has nearly tripled, soaring 268 percent, the data show.

Though 15- to 19-year-olds were the hardest hit, the death rate for kids under nine years old has been steadily, ominously, climbing.

The bleak figures confirm the long-held suspicion that America’s drug problem is not limited to adults.

The authors of the report, from Yale School of Medicine’s Department of Pediatrics, implore legislators to take action – suggesting a first, clear step would be to limit the amount of prescription drugs in family homes, and to impose childproof packaging.

BY AGE: For under-nines (graphs A and B) the death rate has steadily increased over time between 1999 and 2016. For kids aged 10 to 20 (graphs C and D), the trend followed the same trajectory as it did for adults, with a dip after 2008 (when restrictions were brought in for prescription drugs) but the death rate later picked up again as more turned to street drugs

‘The underrecognition of the risks that prescription and illicit opioids pose to children and adolescents is reflected in the current policies and practices in place in the United States today,’ the authors write in the report, published in the Journal of the American Medical Association (JAMA).

‘Of the hundreds of state and federal initiatives enacted to contain the opioid crisis, nearly all focus on adults.’

When it comes to drug-taking, prescriptions, alcohol use, smoking, driving – ‘adult fare’ – we tend to assume children are protected, less exposed, or at least exposed in a more passive, marginal way.

This report shows that is naive thinking.

When it comes to drug overdoses – from both prescribed and illegal drugs – the mortality trend among children has been near-identical to that among adults.

As with adults, white children and males are worse affected than females of any race, Hispanic kids and non-Hispanic black kids. Of the 8,986 under-20s killed by prescription and illicit drugs, 6,567 of them (73.1 percent) were male.

The rises and dips in death rates also followed the same trajectory, at least for kids aged 10 to 20 years old.

There was a steady increase in death rates until 2008, when – in a bid to curb adult deaths – there were new limits imposed on prescriptions.

But a couple of years later, it picked back up – as those who had got hooked on prescription drugs turned to cheaper street-cut drugs to ease their pain and get a fix.

By that point (circa 2013), fentanyl (up to 100 times stronger than heroin) had entered the market and was being cut into all kinds of drugs – from Percocet to cocaine. Just a pinch (two milligrams) of fentanyl can be lethal, so the consequences were devastating.

This is particularly true for 15- to 19-year-olds (who accounted for 88 percent of child drug deaths). 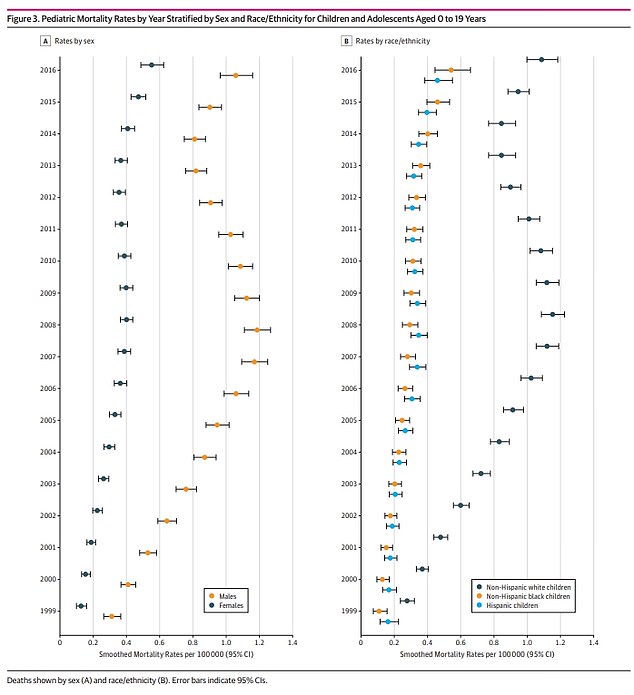 BY GENDER AND RACE: For kids, as with adults, death rates are highest for white males

Since 1999, deaths from prescription drugs in this age group have doubled. Deaths from heroin have more than quadrupled. Deaths from synthetic opioids (i.e. fentanyl) increased by 3,000 percent.

Now, one in four drug deaths in this age group are caused by heroin and a third are caused by synthetic opioids – and experts believe those numbers are still climbing.

For younger children, it is more often than not accidental exposure to medication that was prescribed for their parent.

States are now making moves to curb the number of opioids doctors can dish out.

But the last three decades of over-prescribing have created a nation of addicts – and even if prescriptions are curbed, that presents a new problem.

In the last 10 years, US poison control centers received more than 11,000 calls about exposure to buprenorphine, an anti-addiction drug prescribed to people trying to get off opioids.

Nearly 90 percent of those calls were for children under the age of six, usually in their family home.

‘Of particular note is the lack of childproof packaging for many commonly prescribed opioids, including long-acting forms of the medications that present a known risk to children—especially small children—in whom even a minimal exposure can lead to respiratory arrest and death,’ they write.

‘For example, both Suboxone (the combination form of buprenorphine and naloxone), a medication used to treat opioid addiction, and Duragesic (the transdermal pain patch of fentanyl) come in foil wrappers that can be easily opened by a child.

‘Suboxone is no longer sold in pill form because of concerns over pediatric exposures, but in its current formulation—which consists of brightly colored film strips—it still poses a danger to children.’