9am at a Dan Murphy’s in Melbourne: Massive queues form outside bottle shops across the city as desperate residents stock up on booze during lockdown

Hundreds of drinkers rushed to bottle shops around Melbourne fearing they would be closed under new lockdown restrictions before Premier Daniel Andrews made the decision to keep them open.

Pictures showed masked-wearing panic-buyers packing a Dan Murphy’s car park in Brighton, south east of Melbourne, on at 9am on Monday, as they waited for the store to open.

A health worker wearing full PPE gear was one of the shoppers lining up with an empty trolley.

Pictures showed masked-wearing panic-buyers packing a Dan Murphy’s car park in Brighton, south east of Melbourne, on at 9am on Monday, as they waited for the store to open

The images were taken just hours before the Premier announced thousands of businesses would have to shut from Thursday as 439 coronavirus cases were diagnosed.

Businesses have been divided up into three categories – essential ones that operate as normal, ones that must slash shifts and output, and those that must close.

But bottle shops, along with pharmacies, post offices, banks, petrol stations and a small list of other businesses were spared the closure.

AFL player Brad Green posted the image with the caption: ‘Priorities people, Dan Murphy’s at 9am. Don’t worry about food and toilet paper, get to Dans.’

Locals were quick to comment on the picture, with many claiming their bottle shops were also packed.

‘No wonder we getting lockdown bloody idiots, there’s a delivery service, stay indoors’, one said.

In another video, posted to Reddit, shoppers were seen rushing to another store on Sunday morning. 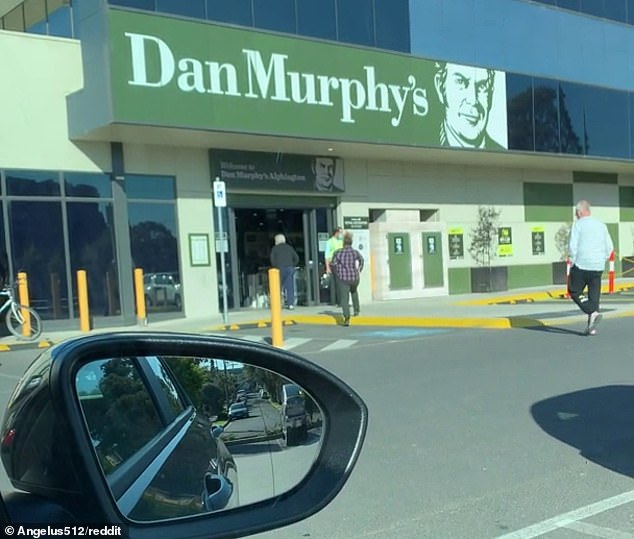 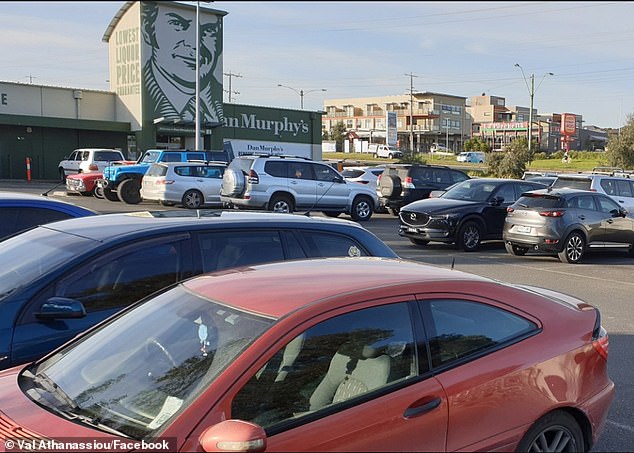 Some twitter users responded to Brad Green’s tweet with a more supportive tone, and said they could be doing the right thing and stocking up for 2 to 3 weeks and ‘never leave the house’

It’s not the first time bottle shops have experienced panic buyers, back in March when the first lockdown was announced, some shelves were left bare.

The Victorian Premier has warned the state that if people don’t follow the restrictions, limit their shopping and practice social distancing at all times, stricter measures could follow.

‘I’m making it clear to people. We all have to follow these rules. We all have to accept that this is the reality we’re now confronted by. We have to make this work,’ warned Mr Andrews.