Cars are designed to be driven – but in some instances, they’re models earmarked as lucrative investments by buyers hoping they will dramatically appreciate, if stored the right way and temptation to take it for a spin ignored.

Collectors are pretty savvy, too, purchasing limited-edition models from new, immediately putting them into storage and not letting them see the light of day until their value has sky-rocketed and they can provide a pocket-busting return.

This latest example shows it’s not just happening with ultra-exotic machines; this 2002 Volkswagen Golf GTI – one of 1,800 sold in the UK – is set to go under the hammer at a classic car auction this weekend with just eight miles on the clock. However, there are some doubts around how lucrative the decision to keep it locked away for almost 20 years has been, given the predicted value from experts…

It will feature at Silverstone Auctions’ Classic Sale at Silverstone on 31 July alongside a raft of collectible motors – take a look at the five additional lots we’ve picked out with staggering low mileage.

Good as new: This 2002 Volkswagen Golf GTI is being auctioned this weekend with no reserve. That might not sound all that interesting, but there is one major USP… 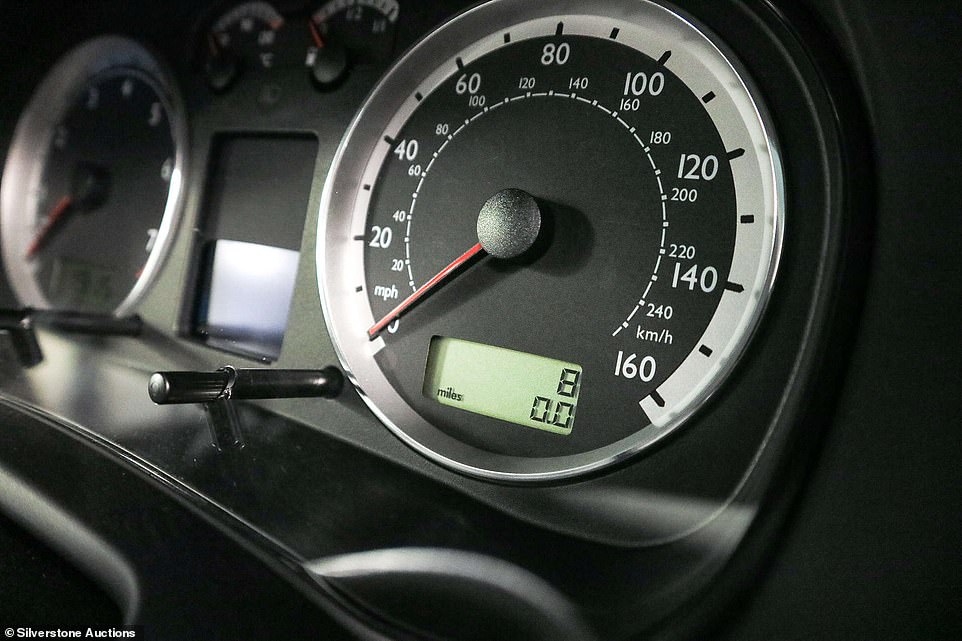 From new, it has covered just 8 miles. That means that has covered an average of 0.47 miles for each year of its existence

Volkswagen celebrated the 25th birthday of its iconic Golf GTI in 2001 by producing a small run of special edition versions of the Mk4 generation that was on sale at the time.

The 25th Anniversary Golf GTI, despite the low number, came as a three-door only, and in three colours: tornado red, back magic or silver.

This one is a petrol model in reflex silver and is number 718 of the UK-delivered examples, which is stamped on the plaque inside the car.

It was first registered on the 1 October 2002 – and seemingly locked away shortly after and has only surfaced again now.

Records show it has just one keeper ahead of the auction, and they’ve barely put a print on the leather steering wheel. 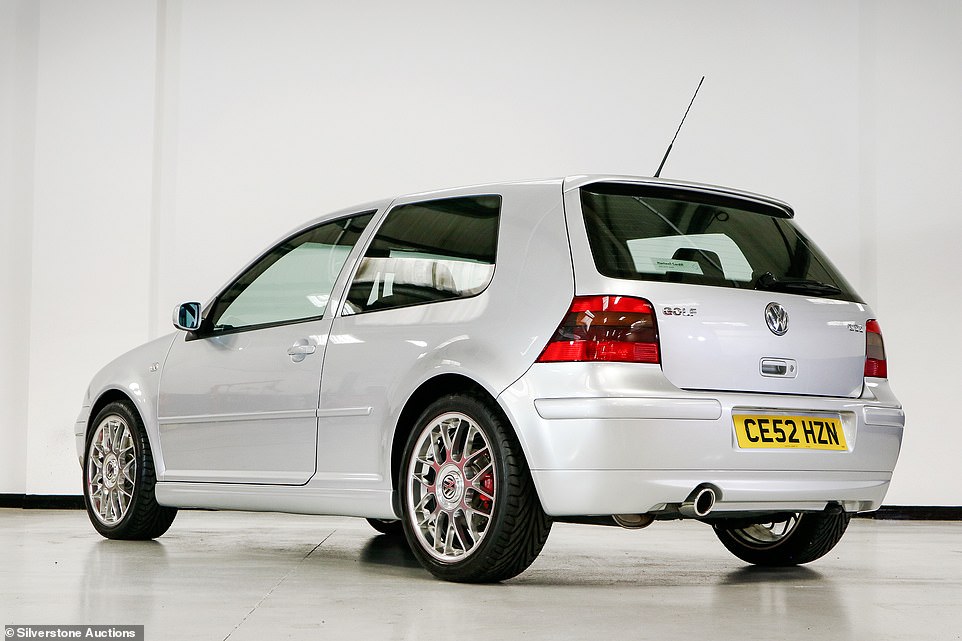 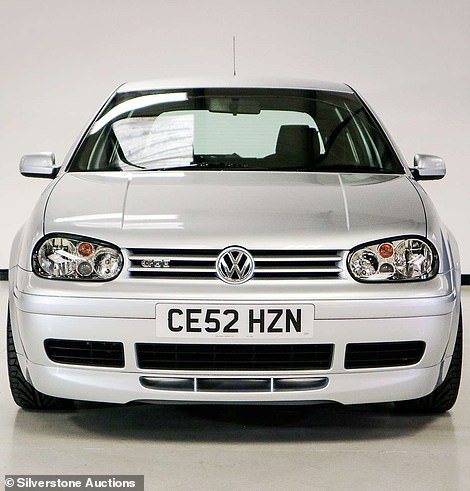 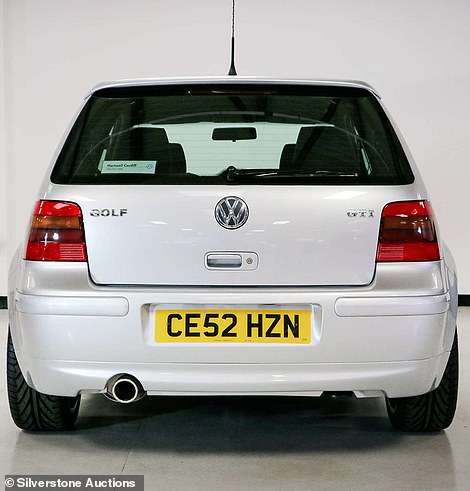 Silverstone Auctions confirms it has a mere eight miles indicated on the odometer – that’s 0.4 miles for every year it has been registered on the road.

The auction house states that it has recently been recommissioned – including its ‘first pre-delivery inspection’ – by a VW Dealer, having barely turned its 18-inch wheels in its entire lifetime.

Costing £18,660 when new some 19 years ago, the unused Golf GTI will go to the block tomorrow (Saturday) with no reserve.

When pressed by This is Money to give a ‘ballpark figure’ for what it might sell for, a Silverstone Auctions spokesperson said: ‘As it’s offered without reserve, it could sell for anything.’ 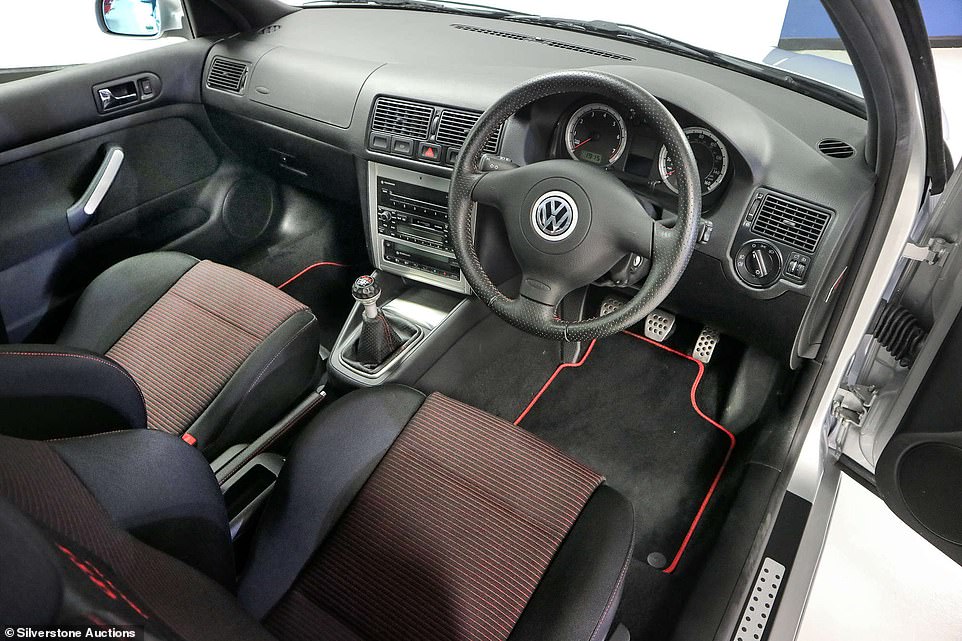 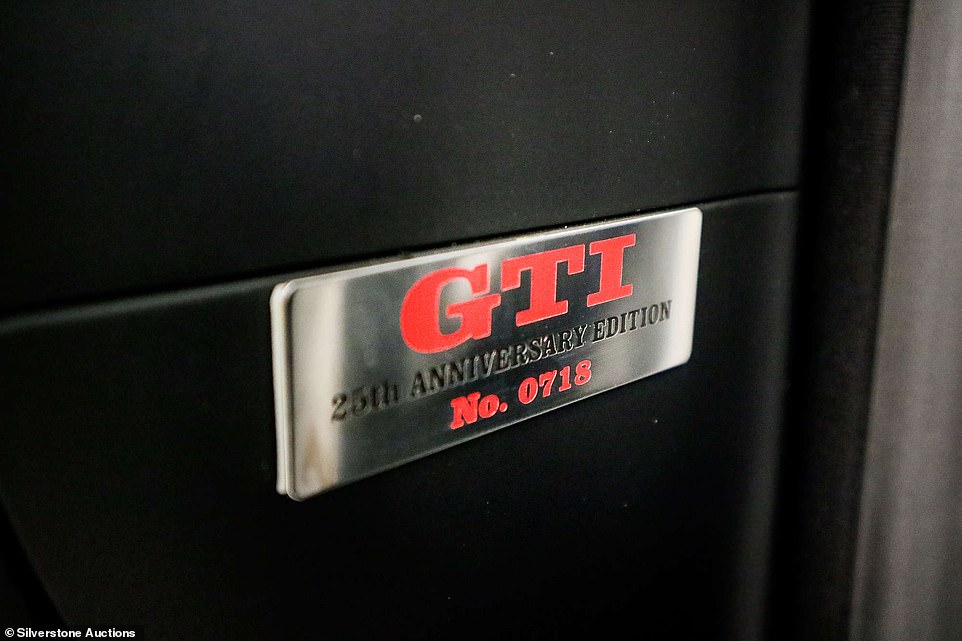 A plaque inside the car – as well as a host of documentation – confirms this is number 718 of 1,800 UK right-hand drive 25th Anniversary editions of the Mk4 Golf GTI 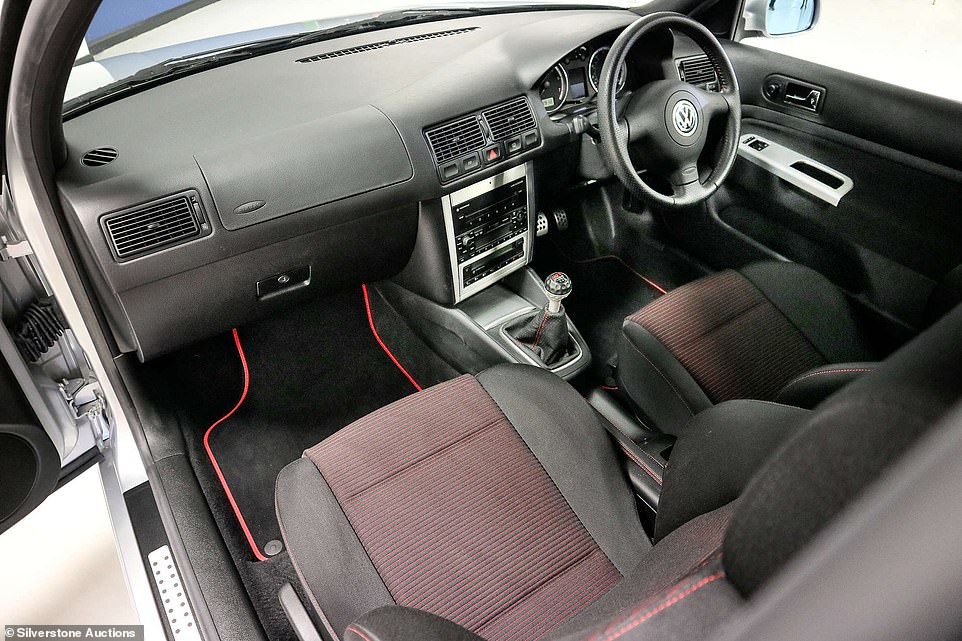 Costing around £18,500 when new some 19 years ago, the unused Golf GTI will go to the block on Saturday with no reserve. Experts say it might get close to £30,000

To get an idea of what its value could be ahead of Saturday’s auction, we asked John Mayhead at classic-car valuations company Hagerty to put a price on the little-used Golf.

He told us: ‘The Golf is a really special car. The 25th Anniversary models are already becoming collectible with “normal” mileage examples selling for up to £9,000.

‘This one though is effectively a new car and Hagerty would not be surprised if it reached £20,000 and could even exceed the top Hagerty Price Guide value for the Mk1 Golf GTI which stands at £27,900.’

If it does reach only £20,000, the one keeper is set to make just over £3,000 profit. Factor in storage costs and anything spent on its upkeep for 19 years and they’ll struggle to break even.

Factor in the impact of inflation and the original 2002 purchase price would today be £27,804. That means the winning bid needs to be above the higher-end Mk1 Golf GTI values for the vendor to make anything at all. 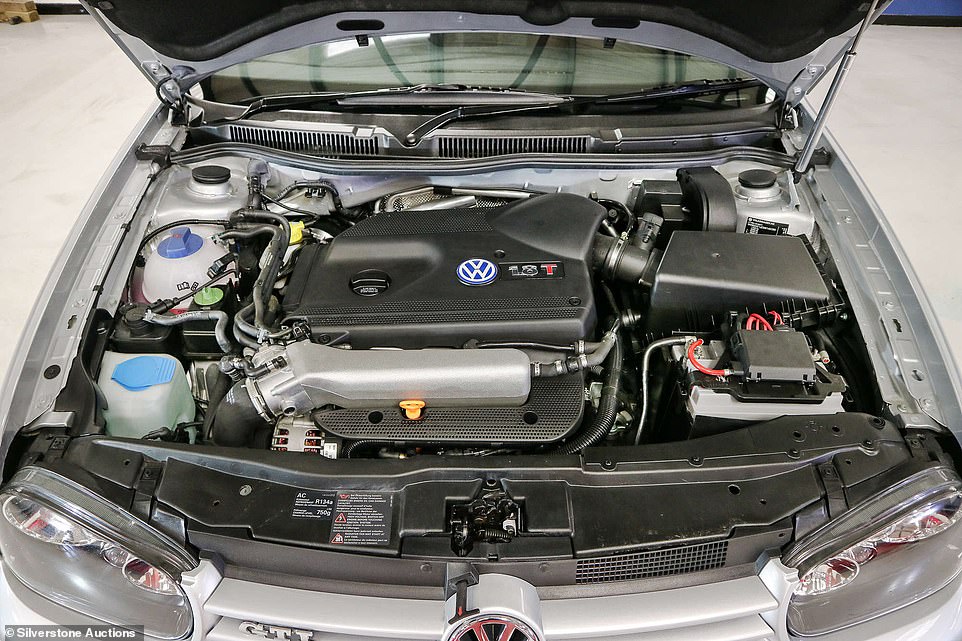 As you might expect from a car that’s covered just 8 miles, the engine bay is pristine. The powerplant of a 19-year-old car rarely looks like this 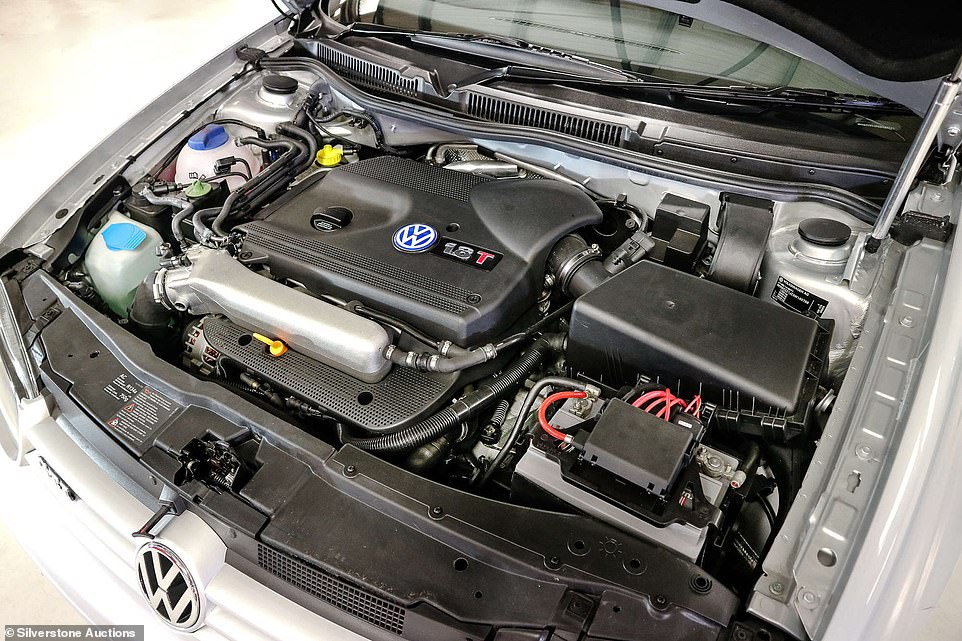 The auction house states that it has recently been recommissioned – including its ‘first Pre Delivery Inspection’ – by a VW Dealer, having barely turned its 18-inch wheels in its entire lifetime

What differentiates this 25th Anniversary edition from a standard Golf GTI at the time is a bunch upgrades, including BBS alloy wheels, Recaro sports seats, modified bumpers at the front and rear and a one-off rear spoiler and apron.

The not-yet-run-in 1.8-litre, four-cylinder turbocharged engine is mated to a six-speed manual gearbox that will be as sharp as the day it left the factory.

That means it should easily achieve its 138mph top speed and 0-to-60mph acceleration time of just 7.6 seconds.

The big question revolves around the decision to treat cars like this as an investment rather than use it for what it was designed to do – provide bounds of fun for the lucky few who got their hands on one.

Silverstone Auctions’ sale this weekend includes a few other examples of barely-driven beauties that are set to cause a bidding frenzy due to their ultra-low mileages. We’ve picked out these five examples… 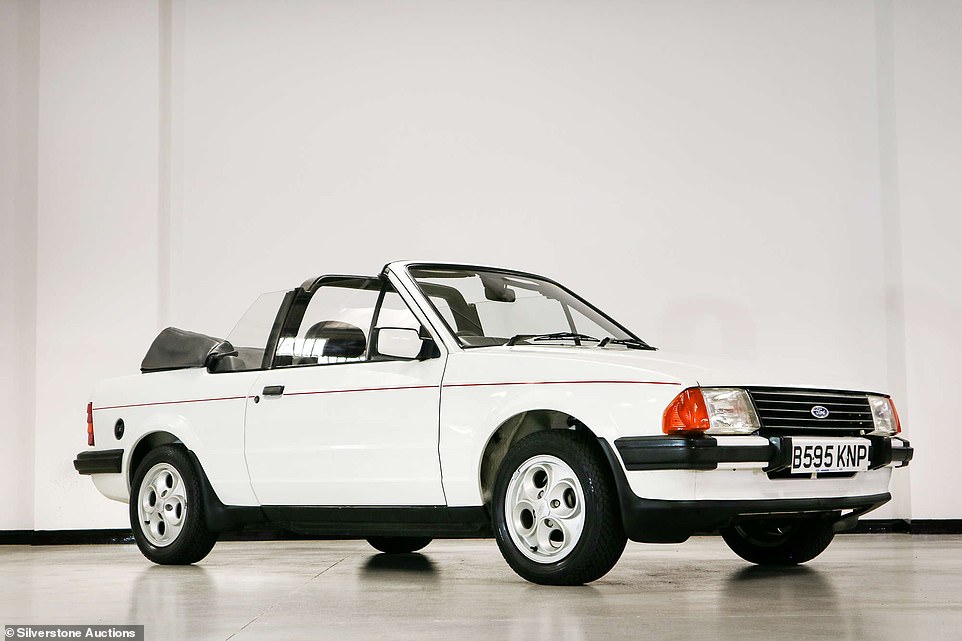 Transport yourself back to the eighties with this retro classic Escort Cabrio. It has covered a mere 3,000 miles from new

Collectors can get their hands on this totally unrestored 1985 Escort 1.6i Cabriolet this weekend, which incredibly still has its original Dunlop tyres fitted and evidence of original factory wax on the underside, proving just how rarely it has neem driven in the last 36 years.

Other features denoting its lack of use include the original front and rear supplying-dealer number plates and rear window sticker, the factory quality-control stickers still in situ in the boot and paint marks from the factory are still visible on all the torqued bolts.

The all-original engine is – like the Golf – barely run in and is ‘commensurate with the rest of the car and its indicated mileage of just over 3,000,’ says Silverstone Auctions. 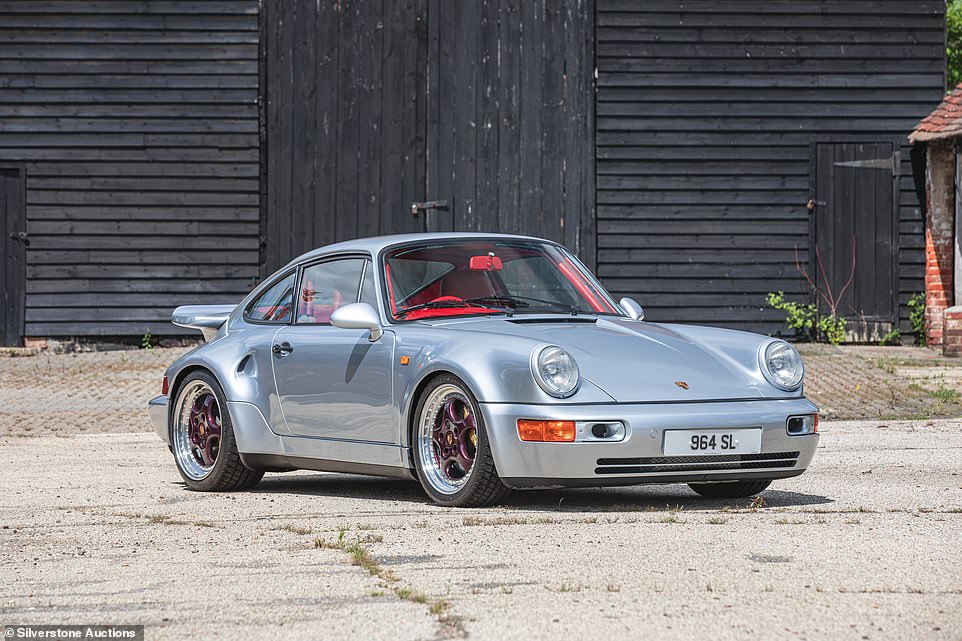 This is a seriously rare period Porsche 911, which means it’s already worth a fairly substantial packet. Add to the equation that it has 45 miles on the clock and this car could sell for seven figures

Porsche announced in 1992 a very limited edition of its 964 Turbo, the 991 ‘Turbo S Leichtbau’, translating to light build. Just 86 examples were produced with a lightweight – yet road legal – construction and an enhanced turbo engine.

The example being sold at the weekend comes with an accompanying Porsche Certificate of Authenticity that it was completed in October 1993 and is one of the last built.

Lowered with sports suspension but other than that is as it left the factory. Having covered just 45 delivery miles, Silverstone Auctions says none of the other 85 examples are of the 964 Turbo S Leichtbau are likely to be able to compete. ‘It’s effectively “brand new’, investment-grade quality and will appeal to every Porsche loving and discriminating collector, anywhere,’ the lot description says. 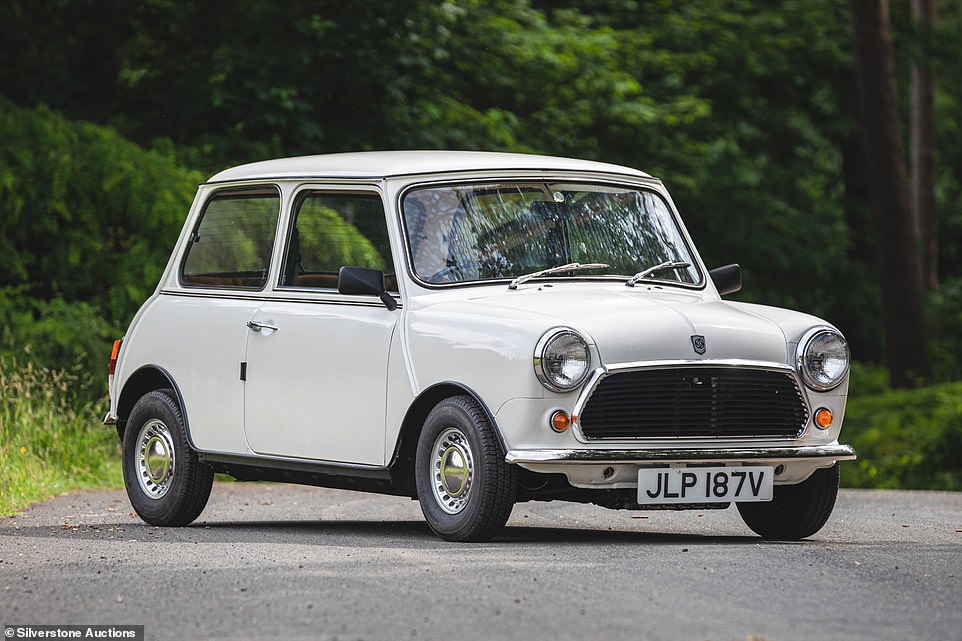 While this Mini won’t get anywhere near the £1.1million estimate quoted for the Porsche listed above, with less than 2,700 miles on the clock it will definitely tempt plenty of collectors

From an ultra-exclusive Porsche to a relative run-of-the-mill Mini with little mileage. It’s a Leyland White automatic version of the fourth iteration of the British icon (produced from 1976) in UK-supplied, right-hand drive that has covered a staggeringly low 2,699 miles from new.

Remarkably, given its ultra-low driving distance, this is a two owner car, with the first having kept it from new – costing £2,884.60 – until 2019 before being bought by the vendor to join his significant private collection.

Silverstone Auctions says the ‘originality of this Mini has to be seen to be fully appreciated’, with the quality control stickers on the inside of the rear brake backplate still visible. These normally come off as soon as the car is used in the rain. 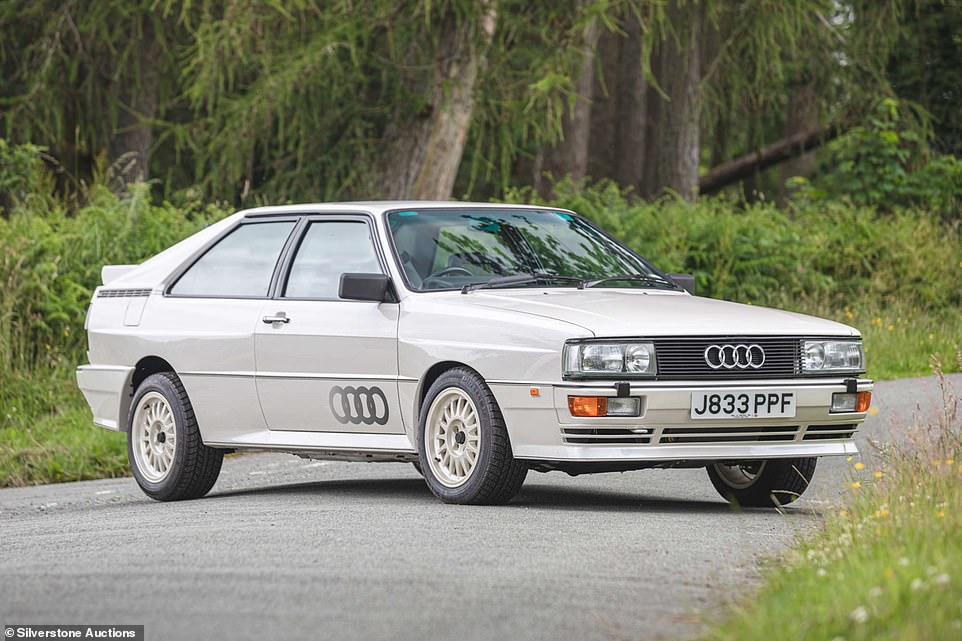 Documents confirm this is the last right-hand drive Audi Quattro produced, which is enough to put pound signs in the eyes of bidders. It has covered less than 10,000 miles from new in 30 years

Want to get your hands on an example of a road-going rally classic that is of particular note and with little mileage, look no further than this 1991 Audi Quattro documented as the last to be built with a letter of confirmation of this fact from the supplying dealers, in reference to a confirmation from Audi AG in Germany.

Finished in crisp Pearlescent White with Grey leather, it’s been in the ownership of just two keepers from new, the first for 17 years and the latter, the vendor, for more than 13.

Yet it still shows only 9,654 miles on the odometer – that works out at 322 miles on average for each of the 30 years since it was produced.

It’s in completely standard trim – including the original Pirelli P700-Z tyres – with a Blaupunkt radio/cassette player it was issued with new. It comes with its original purchase invoice (£38,995). Since 2008, Silverstone Auctions says it has been living in a ‘carcoon’ – a car cocoon – in storage, though has been started regularly. 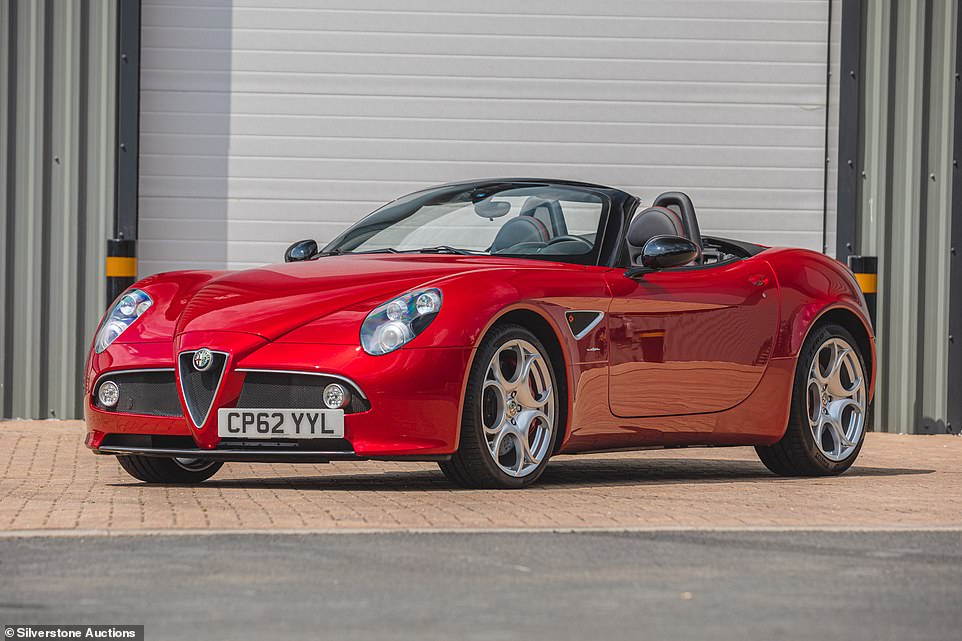 Okay, an eight-year-old car doesn’t quite qualify as classic, but this 2013 Alfa Romeo 8C Spider is certainly collectible. Only 35 examples were brought to the UK – and this one has done just 72 miles from new

Just 35 examples of the stunning Alfa Romeo 8C Spider were delivered to the UK, so when one comes to auction it’s a very rare occasion. These are particularly special modern classics: carbon-fibre body; Ferrari-derived 4.7-litre V8 engine with 450bhp and a 0-to-62mph time of 4.5 seconds.

Just 500 were made and those lucky enough to get their hands on the three dozen UK cars paid over £174,000 for them.

This example has been kept away from tarmac for pretty much its entire eight-year life with an astonishing 72 miles on the clock and not a blemish on its Rosso Competizione paintwork or back leather interior.

While a winning bid is predicted to exceed the original purchase price by six figures, this is one car that’s likely to keep appreciating into the future – which risks it being kept in a temperature-regulated storage facility under new ownership to preserve its value.

The Silverstone Auctions’ The Classic Sale at Silverstone 2021 takes place on Saturday 31 July from 11am.