A 2,624-year-old tree found alive in an American swamp could be killed by climate change

A 2,624-year-old tree has been found alive in an American swamp but scientists say climate change could kill the ancient plant

One of the oldest living trees in the world has been discovered in a North America swampland that is at least 2,624-years-old.

The species is however under threat from illegal logging as well as water pollution, and rising sea levels as a result of climate change, scientists warned.

One of the oldest living trees has been discovered in a North America swampland that is at least 2,624-years-old. The photo shows a researcher standing beside a bald cypress tree

Geologists from the University of Arkansas discovered the ancient trees back in 2017 while studying tree rings in North Carolina’s Black River swampland.

Using tree ring dating and radiocarbon dating they were able to establish that the bald cypress trees, also known as Taxodium distichum make up one of the oldest non-clonal, sexually reproducing trees in the world.

Professor David Stahle, who made the discoveries, has been working in the 16,000 acres Black River Preserve since 1985.

Professor Stahle said: ‘It is exceedingly unusual to see an old-growth stand of trees along the whole length of a river like what he observed.

‘Bald cypress are valuable for timber and they have been heavily logged.

‘Way less than 1 percent of the original virgin bald cypress forests have survived.’ 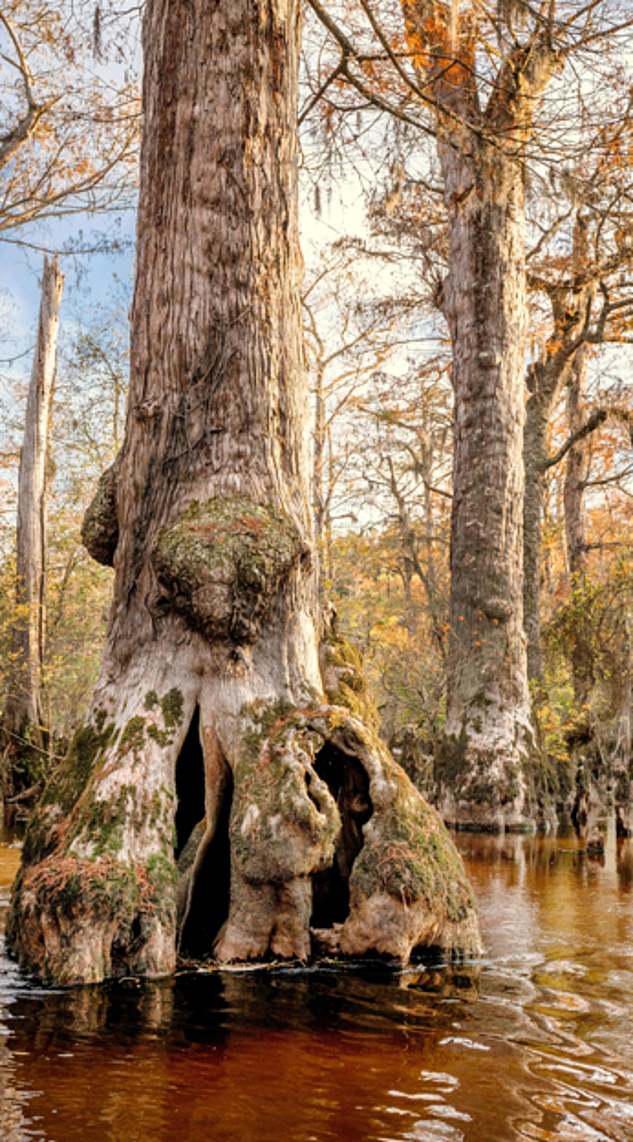 One of the oldest living trees has been discovered in a North America swampland that is at least 2,624-years old. The bald cypress shown in the above photo is of many found in the Black River preserve in North Carolina 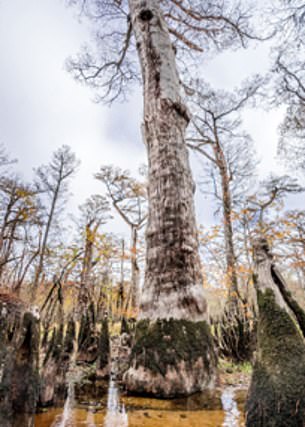 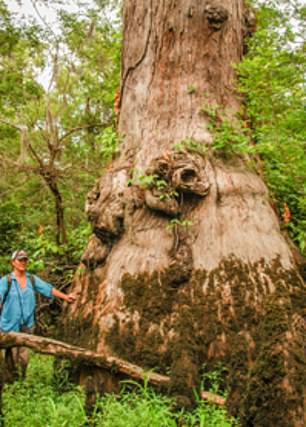 Scientists established the age of the bald cypress using carbon dating and tree-ring measurements which also revealed ancient climate patterns. The trees are however under threat from loggers for their timber as well as water pollution, and rising sea levels

WHAT ARE BALD CYPRESS TREES?

They can live with their trunks completely submerged in water

The wood of the bald cypress is valued for its water-resistance and is known as pecky, or peggy, cypress in the lumber trade when it contains small, holes caused by a fungus.

The tree is often grown for its colourful fall foliage and can be cultivated far north of its native range.

Where soil moisture is abundant, this tree may grow as much as 18 inches per year.

A young bald cypress is symmetrical and pyramidal and as it matures, it develops a coarse wide-spreading top.

Its slender trunk is usually 30 metres (about 100 feet) tall and 1 metre (3.3 feet) in diameter. The reddish brown bark weathers to an ashy grey.

A tree growing in wet soil is strongly supported at its base, and its horizontal roots often have structures like ‘knees’ above the waterline which may help oxygenate the roots or provide support in the soft muddy soil.

The trees , though the leaves can persist year-round in warm climates. The seed cones are green and globular and are typically no larger than 3.5 cm (1.4 inches) in diameter.

Trees like the bald cypress are valuable for reconstructing ancient climate conditions and the oldest trees in the area have allowed geologists to piece together the climate history of the eastern United States by a further 900-years.

They show evidence of major periods of droughts and flooding during colonial (1492-1763) and pre-colonial times (before 1492).

The work carried out by the University of Arkansas has also helped in the preservation of the ancient swampland.

Katherine Skinner, an executive director at The Nature Conservancy that owns the Black River reserve, said: ‘Dr. Stahle’s original work on the Black River, which showed trees dating from Roman times, inspired us to begin conservation on the Black more than two decades ago

‘This ancient forest gives us an idea of what much of North Carolina’s coastal plain looked like millennia ago.

It is a source of inspiration and an important ecosystem. Without Dr. Stahle, it would have gone unprotected and likely destroyed.’

The full report has been published in the journal Environmental Research Communications.