This is your captain screaming: Incredible story of the British Airways pilot who was sucked out of a cockpit window mid-flight 30 years ago yet lived to tell the tale – thanks to a flight attendant who held on to his trouser belt

As tales of survival against the odds go, this one takes some beating.

Thirty years ago a British Airways captain was sucked halfway out of his cockpit when a windscreen blew out 17,300ft over Oxfordshire.

He survived because a steward held onto his trouser belt and legs – and thanks to his co-pilot managing to make an emergency landing.

Thirty years ago British Airways captain Tim Lancaster was sucked halfway out of his cockpit windscreen when it blew out, 17,300ft over Oxfordshire. This image was taken after the plane safely landed at Southampton, with Mr Lancaster’s blood clearly visible on the fuselage 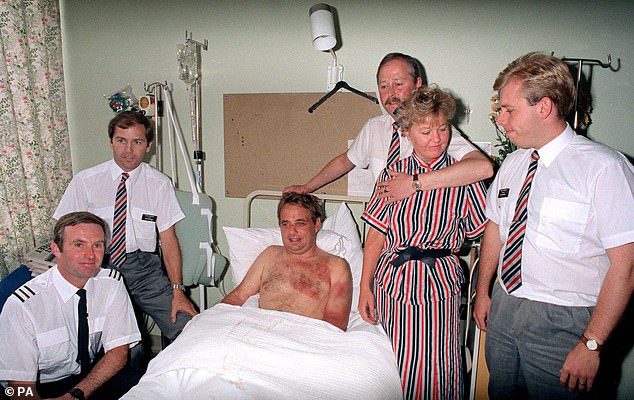 It was June 10, 1990, and the flight crew of the Malaga-bound plane, a BAC-111 aircraft, had earlier performed a routine take-off from Birmingham.

But then, over Didcot, the left-hand windscreen in the cockpit came loose and flew off, causing a potentially deadly decompression.

The air left the flight deck with such force that the cockpit door was pulled off its hinges and hurled against the throttle controls, causing the plane to rapidly accelerate as it headed downwards.

The captain, Tim Lancaster, was half sucked out, with his legs caught on the flight controls.

While his first officer, Alastair Atchison, fought to control the aircraft, cabin attendant Nigel Ogden, who’d enter the flight deck to ask if the pilots wanted any refreshments, grabbed hold of Lancaster and held onto him with all his might.

Mr Lancaster’s head, meanwhile, was banging against the fuselage – the crew were certain he’d died.

Mr Ogden told the Sunday Times: ‘All I can remember is looking at Alastair Atchinson, the co-pilot, struggling to get the plane under control and shouting “Mayday! Mayday!” into the radio.’

Eventually, with the help of another flight attendant, Simon Rogers, they freed Mr Lancaster’s legs from the controls and Mr Atchison was able to make an emergency landing at Southampton, with no passenger injuries. 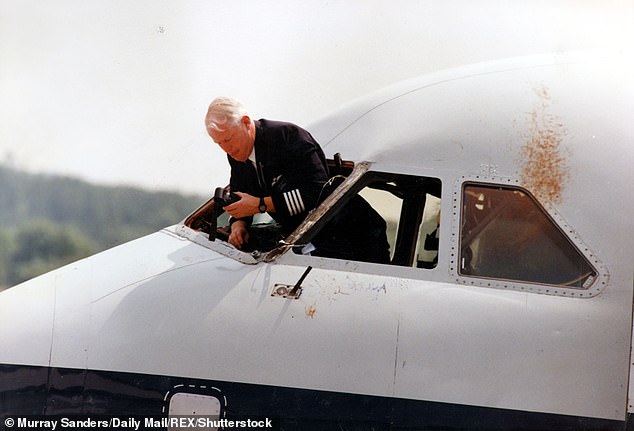 A British Airways captain investigates the BAC-111 at Southampton Airport

That Mr Lancaster survived the 22-minute ordeal is miraculous.

He was treated in hospital for a broken arm, frostbite and severe bruising, while Mr Ogden suffered a dislocated shoulder and frostbite.

It was discovered later that the windscreen was newly fitted, but with screws that were too small in diameter. All 87 of the bolts flew out once the aircraft gained altitude, owing to the difference in pressure between the inside and outside of the fuselage.

Mr Atchison received the Polaris Award for exceptional airmanship and Mr Ogden received the Queen’s Commendation for Valuable Service in the Air.

Images from a National Geographic reconstruction of the incident have been circulating on social media recently – with some finding the tale too dramatic to believe.

In the world of fiction, James Bond’s nemesis Goldfinger died in the 1964 film of that name when a window on a private jet was raked by gunfire.

He is sucked out of the window feet-first, while 007 grabs on to part of the cabin’s interior.