Scientists found people who aren’t used to a lack of shut eye eat more – around 50 calories extra at breakfast.

The research measured how much food three dozen students, of which half had signs of insomnia, consumed in the morning.

Half of each group had a normal kip. The others were allowed only five hours of shut eye – to mimic that of sleep deprivation.

Experts expected those with insomnia symptoms to eat most of the buffet they put on, which included croissants, Nutella and biscuits.

However, the scientists found only overweight ‘good’ sleepers ate more after sleep deprivation, while ‘insomniacs’ did not.

Scientists found people who aren’t used to a lack of shut eye eat more – around 50 calories extra at breakfast. However, insomniacs ate less 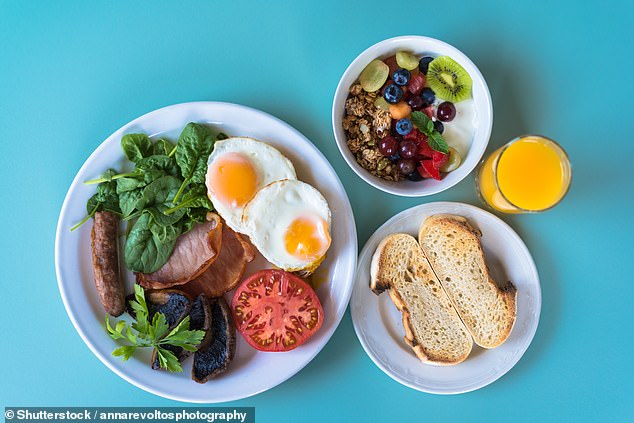 After a night of normal sleep and a night of deprived sleep, a large and varied breakfast was provided to the participants, who were told they could eat as much as they wanted

Researchers at Sapienza University of Rome recruited 32 students to take part in the study, published in the journal Clinical Psychologist.

The deprived sleep was a duration of five hours – much less than the recommended seven to nine hours.

When they woke up, the participants went to the lab without having breakfast or drinking anything except water.

On both mornings, participants performed three computer tasks so they weren’t aware of what the real study was.

After these tasks, a large buffet breakfast was provided with both salty and sweet foods. They were told they could eat as much as they wanted.

On the table were items such as biscuits, croissants, Nutella, savoury crackers, fruit juices and coffees.

After the participants left, the researchers calculated how many calories and what macronutrients they had each eaten by weighing food.

Insomnia means you regularly have problems sleeping. It usually gets better by changing your sleeping habits.

You have insomnia if you regularly: find it hard to go to sleep, wake up several times during the night, lie awake at night, wake up early and can’t go back to sleep, still feel tired after waking up

Everyone needs different amounts of sleep. On average, adults need 7 to 9 hours, while children need 9 to 13 hours.

You probably don’t get enough sleep if you’re constantly tired during the day.

The most common causes of insomnia are: stress, anxiety or depression, excessive noise, an uncomfortable bed or alcohol, caffeine or nicotine.

Insomnia usually gets better by changing your sleeping habits. For example, going to bed and waking up at the same time every day, and only going to bed when you feel tired.

A breakdown of what they consumed revealed they also ate less carbohydrates and fat.

Good sleepers with a high BMI who were deprived of sleep ate more food, while those who generally didn’t sleep well did not.

However, there was little difference among sleep-deprived students without signs of insomnia who had a healthier BMI.

The findings suggest food choices are not only affected by one night of sleep, but habits formed over a lifetime, the researchers said.

The team wrote the results were ‘contrary to the hypotheses’ they predicted.

‘Results on food intake revealed the partial sleep deprivation did not increase in both groups the amount of energy consumed at breakfast,’ they added.

‘However, when controlling for BMI, analyses showed after the sleep deprivation, good sleepers with higher BMI consumed more kcal.’

However, the results did not change when the team controlled for eating restriction. And the insomniacs may skip breakfast but then eat more calories over the day.

The scientists said future studies are needed to investigate the effects of sleep deprivation on eating habits.

It shortens your life expectancy, according to the NHS, and has previously been linked to a greater risk of cancer.

More than 40million people suffer from long-term sleep disorders in the US, data from the CDC shows. While it is estimated there are 1.5million patients in the UK.