A bold new crime drama is about as gritty as it gets, say its cast

As a nation we love our police dramas, but murderous television can sometimes be a little sterile. The focus is more on the whodunnit rather than what they actually did. That is turned on its head with new thriller Crime, a drama that draws you down into an underbelly of vice and trauma that can be as seductive as it is shocking.

Perhaps that’s unsurprising as it’s based on a novel by Irvine Welsh, the man behind seminal druggie movie Trainspotting, and he’s adapted the book for the BritBox series.

‘I’ve never seen anything that looks like this show,’ says Irvine of the six-part drama, which incorporates abuse, drugs and murder. ‘Whether it’s going to be a bit much for some, or not what people expect from a British show, I don’t know. But I can’t think of anything like it on British TV.’

It’s certainly the grittiest crime drama we’ve seen since Luther, and it’s just as compelling, says one of its stars, Angela Griffin, who found fame in Coronation Street and Holby City. ‘It’s a dark thriller which is as sexy as hell. It’s one of those shows I’d normally look at and think, “I wish I was in that.” Now I am!’

Angela appears as Trudi, the girlfriend of troubled detective Ray Lennox, played by Mission: Impossible star Dougray Scott. ‘All you know about Lennox is that there’s something murky in his past, and then he’s asked to investigate the disappearance of a girl,’ says Angela. ‘There are so many gentle crime dramas, but I think the popularity of shows like Squid Game proves that people get excited by something really grim.’

Making the series was a passion project for Dougray, who is a huge fan of Welsh (see panel below). While in the book the action takes place in Miami, the TV series is set in Dougray’s native Scotland and goes back into Lennox’s past – and a crime that forms the background of the novel.

To prepare for the role, Dougray plunged deep into documentaries about how serial killers were captured and worked with an ex-policeman who’s an adviser on the show. We meet Lennox at the start of an investigation into a missing schoolgirl. But it becomes clear that he has issues of his own.

‘He’s a rough, fragile, avenging angel who’s determined to protect the vulnerable,’ says Dougray. ‘Stuff happened to him as a child so he became a copper because he felt that was the best way to avenge what was done to him. But what makes him a great copper also makes him a bad copper; he’s impetuous, he works off the cuff, on instinct. 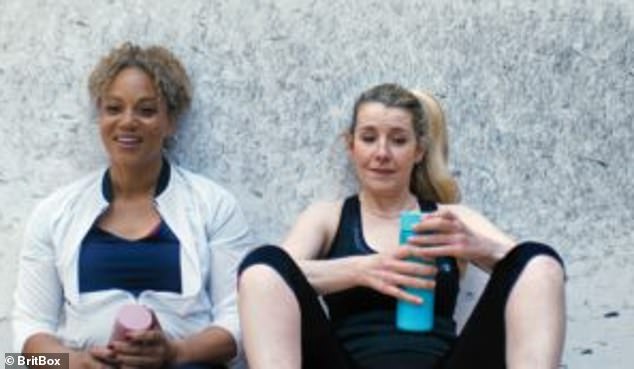 It’s certainly the grittiest crime drama we’ve seen since Luther, and it’s just as compelling, says one of its stars, Angela Griffin, left, who found fame in Coronation Street and Holby City

‘The story here is brutal. But at the same time there’s a tenderness in the characters. I think it will appeal to lots of people.’

HOW DOUGRAY SPOTTED A HIT

Dougray Scott spent five years trying to get the series made after becoming convinced he had to play Irvine Welsh’s creation, detective Ray Lennox.

The Fife-born actor says he bonded with Welsh’s work from the moment he picked up his first novel, Trainspotting, in 1993. Written in a raw Scots dialect and drawing on Welsh’s experiences growing up in Edinburgh, it was turned into a hit film starring Ewan McGregor (left).

Dougray was also bowled over by the author’s 2008 novel Crime, about Lennox, and knew he wanted to bring him to life. He told that to Welsh when they met at a charity function, saying he was ‘the character I was born to play’.

‘For someone who had a very similar upbringing to Irvine, and I did, to read your world portrayed in novel form is really exciting and accessible,’ he says.

We get glimpses of Lennox’s interior world through innovative direction, which at times shows him screaming in mental pain when he seems outwardly calm. ‘There’s one scene where Dougray just changed before my eyes,’ says Angela. ‘It was so brilliant I got this feeling in my tummy – it made me sit up and think. It was incredible to see him physically change in front of me.’

Trudi’s relationship with Ray is just a few months old, and she thinks her boyfriend is gentle and calm. But she begins to realise how troubled he is. ‘This case awakens part of him she didn’t know existed,’ says Angela. ‘It begins in a warm, supportive place; he wants to open his life up to her. But the relationship gets tested beyond all imagining. The show is about the darkest things in life and is very complex. But Trudi’s a fighter – I don’t think he knows that she’s going to be as strong as she is.’

The story is firmly set in the modern world; Lennox is a gruff ‘new man’. He might be patronising to his young partner DS Amanda Drummond, played by Joanna Vanderham, but when she pulls him up on it, he thinks about it and apologises.

Meanwhile, when Trudi gets involved in a #MeToo style storyline at work, Lennox backs her up. ‘Ray is there to help but takes her to the dark side, you could say,’ says Angela.

Despite all the bleak scenes, the series isn’t unremittingly harsh. There are touches of lightness and, ultimately, humanity. ‘Irvine’s writing is confronting but he’s also a funny man,’ says Angela. ‘He manages to capture that depravity and characters that should really be unlikeable, but you invest in them. You want to go on a journey with them.’

Irvine Welsh’s Crime is available from Thursday on BritBox.