A Christmas Day of two halves! Britain’s weather to be split down the middle

A Christmas Day of two halves! Britain’s weather to be split down the middle with the west facing a festive washout but perfect sunny skies to walk off the turkey lunch in the east

Those dreaming of a white Christmas are likely to be sorely disappointed.

The weather on Christmas Day is set to be generally dry, with some bright and sunny spells, a scattering of patchy rain or drizzle in the west of the country, but, no snow in sight.

In the east of the country is will be drier, but temperatures are set to be colder, with day time highs of between 35F and 41F (2C-5C).

Despite facing possible showers, the west of the country will get milder temperatures, with a possible high of 53F (12C).

The brightest and sunniest weather is likely to be seen in the north-east, Scotland and Northern Ireland.

In the east of the country is will be drier, but temperatures are set to be colder, with day time highs of between 35F and 41F (2C-5C) 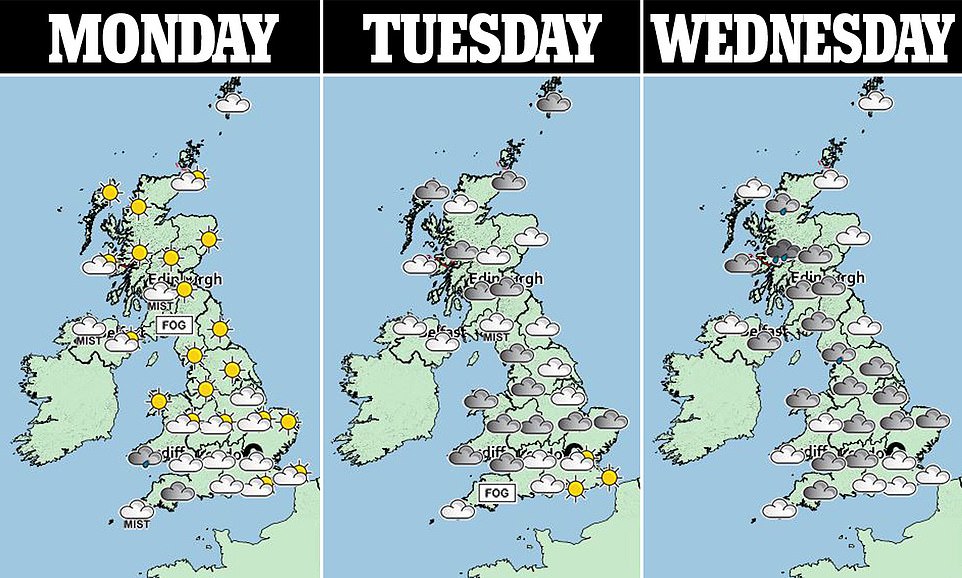 Meteorologist Mark Wilson said: ‘So we look ahead to the all important forecast then for Christmas Day.

‘A lot of cloud on the map, an east-west split to the weather.

‘In the west that cloud could be thick enough to get some patchy rain or drizzle, quite light though and mainly over western hills.

‘Further towards the east its generally dry, with a bit more in the way of brightness.

‘But actually the coldest of the temperatures will be in the east on Christmas Day.

‘We are looking at day time highs of 2-5 degrees for many areas.

‘Further towards the west it is that bit milder, with highs of eleven or twelve degrees.

Mr Wilson added there is very little change in the weather as we hit Boxing Day, which is also expected to be largely dry and mild. 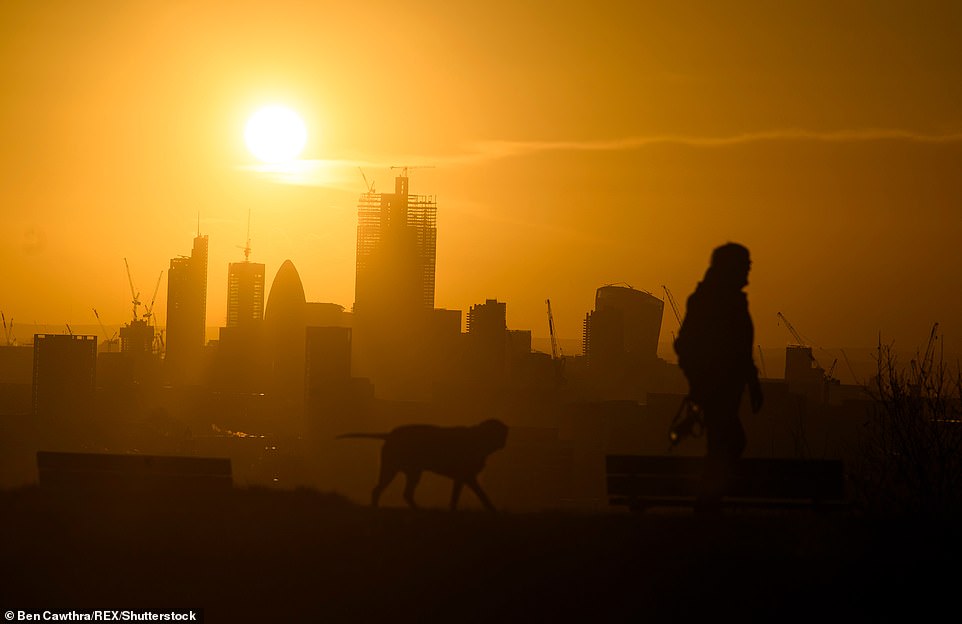 The weather forecast for Christmas Day is set to be generally dry, with some bright and sunny spells, with a scattering of patchy rain or drizzle in the west of the country and no snow in sight

A statement of the Met Office website reveals why the likelihood of snow is now rare at Christmas time.

It said: ‘For many of us, snow is synonymous with Christmas.

‘Bing Crosby famously dreamt of it, while movies, advent calendars and Christmas cards are all decorated with snow-filled scenes of a white Christmas.

‘However, for most parts of the United Kingdom, Christmas is only at the beginning of the period when it’s likely to snow.

‘We are more likely to see snow between January and March than in December with snow or sleet falling an average 3.9 days in December, compared to 5.3 days in January, 5.6 days in February and 4.2 days in March.

‘White Christmases were more frequent in the 18th and 19th centuries, even more so before the change of calendar in 1752 which effectively brought Christmas day back by 12 days.

‘Climate change has also brought higher average temperatures over land and sea and this generally reduced the chances of a white Christmas.’