No one pretends that river cruise ships are pretty things. Long, squat and wholly out of proportion to the scenery and many of the buildings they pass along their ever-increasing routes, they are more like dolled-up barges or exaggerated narrowboats.

But when you’re on one, gliding silently along the Danube, staring at the riverbank from the comfort of a balconied cabin, they are, well, not quite so offensive after all.

And this is a mighty river, the second longest (1,770 miles) in Europe, after the Volga, flowing through nine countries before spilling into the Black Sea.

Mark Palmer boards the Amadeus Silver II (not pictured) for a ‘Classical music on the Danube’ cruise – and has a fabulous time. Despite very low water levels forcing a change of boat

We are on board Amadeus Silver II for what is called its ‘Classical music on the Danube’ cruise and, in addition to my wife, we have with us my father-in-law, Noel, who will soon be 90, and although he tries not to be a music snob, he would probably plead guilty if charged.

We half expect Vivaldi’s Four Seasons at breakfast, Strauss’s Blue Danube at lunch and repeats of both on an endless loop at dinner.

But, shortly after embarking at Passau in Germany, we bump into the BBC’s former arts supremo and biographer of Leonard Bernstein, Humphrey Burton CBE, who is guest speaker on the cruise and one of Britain’s leading music authorities.

He is 88, but still razor-sharp. What’s good for Mr Burton will be good for us — and so it proves, beginning with our first evening when he introduces a quintet led by famous Austrian violinist Luz Leskowitz. They start with the overture from the Marriage Of Figaro and end with Mozart’s G minor quintet K516, played with such love and exquisite timing that even dear old Humphrey seems to well up.

Amadeus Silver II can carry about 180 passengers, but it is only two-thirds full, made up of Americans, Canadians, Germans, a good representation from Israel and a fair-sized contingent from Britain.

I’m not exactly in the first flush, but feel young in comparison with most of the other passengers. Even the cruise director is getting on a bit. Caspar, from Holland, is 69 and says he doesn’t intend to retire until he’s 74. Bravo — but what is it about cruise directors who make The Donald seem shy and retiring?

It must have something to do with loving the sound of their own voices, as they take to the tannoy to impart some important piece of information. In Caspar’s case, he has every right to like the sound of his bass/baritone voice, flitting seamlessly between German and English. 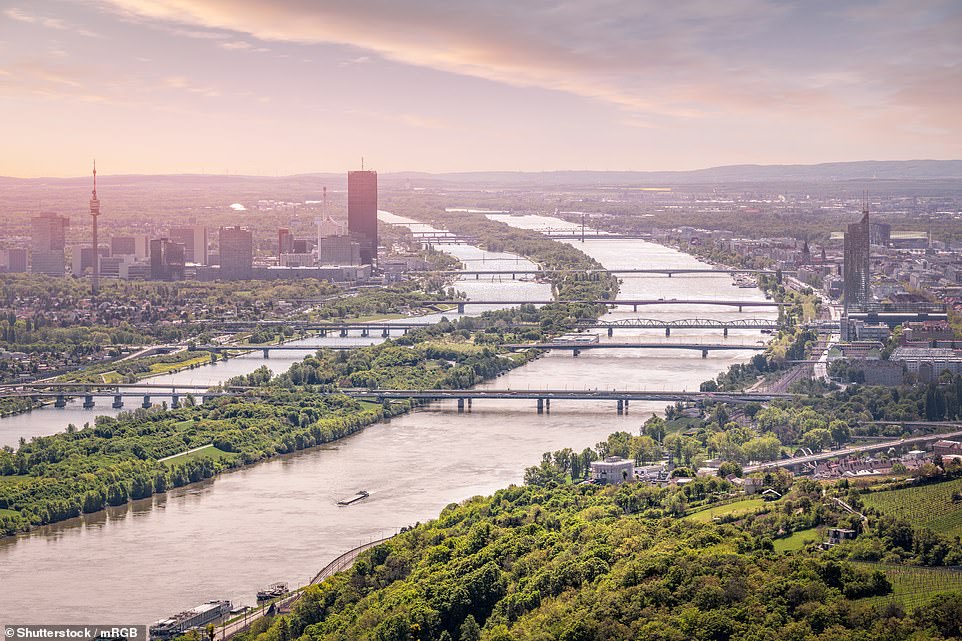 In Vienna (pictured) Mark and his travel companions go to see The Magic Flute at the Volksoper opera house, where a seat in the stalls is less than £60, ‘a fraction of the prices back home’

But on our second day — after we had stopped in Linz (near the birthplace of Hitler), with its attractive Baroque centre and prized cathedral (the largest in Austria), then moved on to Melk, where we visited the famous monastery and attended a wonderful concert in St Koloman Hall — Caspar sounds almost conspiratorial.

‘Please would everyone — and I mean everyone — come to the Panorama Bar at seven o’clock this evening for an extremely important announcement.’

Clearly the ship is sinking. On entering the Panorama Bar, glasses of kir royale are being handed out, a sweetener of sorts before Caspar announces that in 24 hours we will have to change boats.

It has been a record-breaking hot summer, water levels in the Danube are low and the Amadeus River Cruises fleet is scattered in all the wrong places, he tells us gravely.

There is an audible gasp — pianissimo but a gasp all the same. One of the great joys of a cruise is visiting several countries on a single trip without having to pack and unpack. But not this one.

Never mind. We have arrived in Vienna, with Bratislava and Budapest still to come. All meals are included, plus soft drinks, beer and wine at lunch and dinner. And we are impressed with our cabin, bigger than expected, wi-fi complimentary.

Some excursions are gratis, others you pay for. And as seasoned cruisers will know, there is nothing to stop you organising your own, often cheaper, outings. 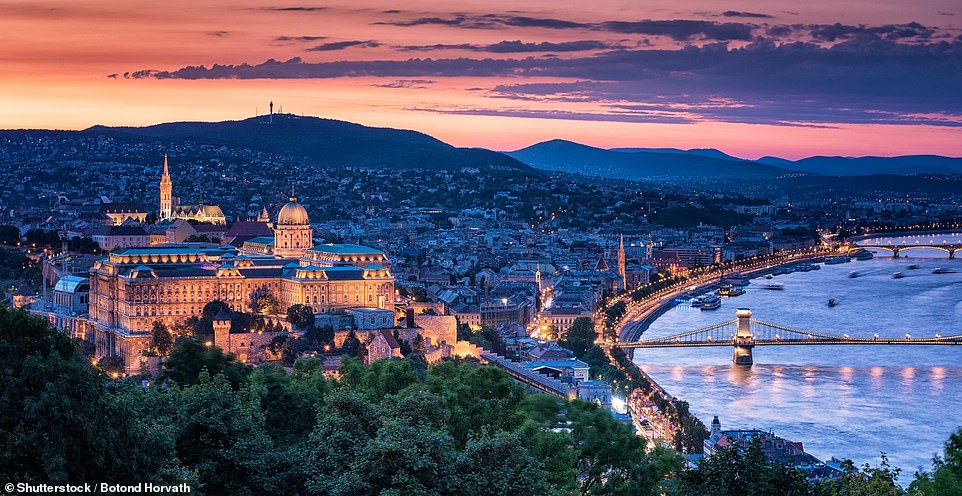 Amadeus River Cruises (amadeus-rivercruises.co.uk, 0800 035 6411) offers seven nights on its Classical Music on the Danube cruise, departing October 29, 2020, from £1,879pp, a saving of £530 per couple. Price includes return flights and transfers, all meals on board and complimentary wine, beers and soft drinks with meals. Solo occupancy rates from £2,099pp. Daily Mail readers can save 20 per cent on meet-and-greet parking at major UK airports with Maple Parking by using discount code DAILYMAIL20 at mapleparking.co.uk.

We do that by acquiring tickets to The Magic Flute at Vienna’s Volksoper opera house, where a seat in the stalls is less than £60, a fraction of the prices back home. It’s a fleeting seven-hour stop in Bratislava — capital of Slovakia — just about long enough to appreciate its glorious architecture, and to worry about it becoming a sleazy stag destination.

The big crescendo is Budapest, where the Danube cuts through Buda and Pest as if desperate to be the centre of attention. I’m a first-timer here and had not quite appreciated what a fabulous, vibrant city it is.

‘. . . and this evening, ladies and gentlemen, we have a surprise for you,’ says Caspar on our last night. By now, Caspar has gained a reputation for embellishment — but not on this occasion.

The surprise is a night-time cruise where both banks of the river are lit up to thrilling effect, the parliament building looking like a shimmering Christmas cake.

Yes, the Blue Danube comes pelting over the tannoy, but no one complains. In fact, Humphrey Burton and my father-in-law are practically waltzing around the top deck, defying their years and proving that a river cruise can work wonders for body and soul.

You can always bank on a river cruise.

It’s one of the best ways of seeing the world, and here we reveal eight unmissable trips.

Captain Cook Cruises operates a paddlewheeler between Murray Bridge and Blanchetown, an hour from Adelaide

Mountains and outback, deserts and red gum tree forests; the River Murray passes the lot, starting in Victoria’s Australian Alps, then cutting across the plains to form a border with New South Wales before dipping down to the sea in South Australia, where pelicans swoop and cockatoos roost in trees.

Captain Cook Cruises operates a paddlewheeler between Murray Bridge and Blanchetown, an hour from Adelaide. There’s a birdlife tour and Barossa wine and heritage tour (Jacob’s Creek and another winery) and a good chance of seeing kangaroos.

How to do it: PS Murray Princess sails a seven-night Murraylands & Wildlife cruise between Murray Bridge and Blanchetown, all year, including transfer from Adelaide, from £980 pp (murrayprincess.com.au, 0061 8 8202 8698). 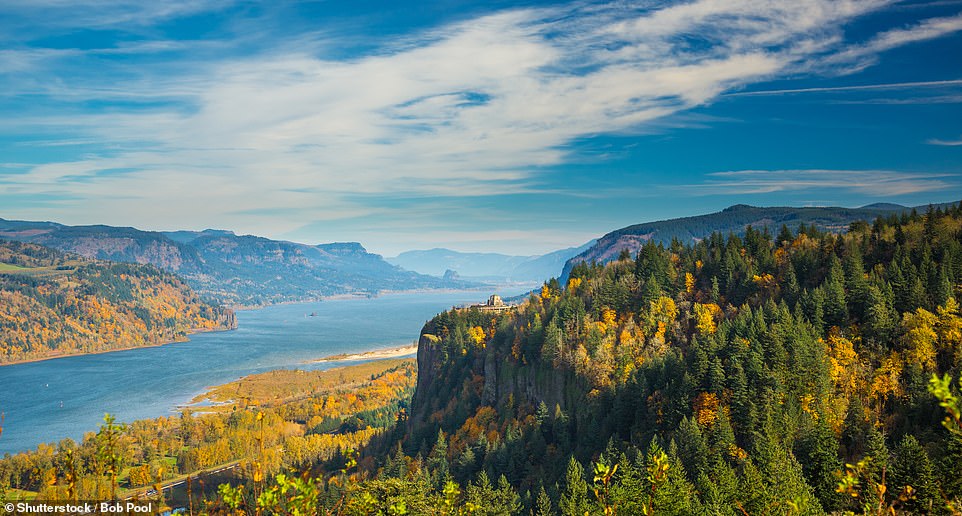 Spectacular: The Columbia river’s banks are cloaked in a temperate forest that turns to gold in autumn before the snow

The spectacular Columbia river is a like a cowboy-film fantasy of sandy bluffs and sheer drops into gorges carved by lava flows and ice sheets. Its banks are cloaked in a temperate forest that turns to gold in autumn before the snow. Primeval scenery such as the Dalles rapids and 600ft Multnomah Falls that crash through Columbia Gorge are truly inspiring.

The river divides Washington State and Oregon in the shadow of snow-capped Mount Hood, as seen from an authentic paddlewheeler. Laze on deck in a rocking chair as you meander from Clarkston to Portland, reaching the sea at Astoria, where sea lions colonise the estuary.

Best for: Cowboys and cowgirls.

How to do it: American Empress sails until November with a nine-night trip, including pre-cruise hotel night and flights, from £3,395 (lightbluetravel.co.uk, 01223 568904).

Lose yourself in the northern Balkans on a river that starts in the Slovenian mountains, crosses Croatia and heads into Serbia. The River Sava is little known and passes through towns and villages where time has virtually stood still.

Don’t miss: The promenade outside the vast Austro-Hungarian fortress in Slavonski Brod.

From Russia with love

The River Dnieper (pictured) is Europe’s third longest and runs 1,300 miles from Russia through Belarus and Ukraine into the Black Sea

The gorgeous city of Kiev sits astride the River Dnieper, a major waterway hardly heard of in Britain, yet it’s Europe’s third longest and runs 1,300 miles from Russia through Belarus and Ukraine into the Black Sea.

Sail from the Ukrainian capital to the small city of Kherson at the river’s mouth, where Catherine the Great’s lover Prince Grigory Potemkin is buried, then into the Black Sea, past the fabulous 1911 lattice steel Adziogol lighthouse to Odessa.

Best for: Ukraine up close.

Perhaps the most awe-inspiring river system in the world, the Amazon cuts through the heart of South America. It’s a wetland ecosystem of jungles, lakes and wildlife and, at its mouth, is 125 miles wide. Sail from Cayenne in French Guiana along the Brazilian coast, then upriver to Santarém, where the muddy Amazon flows beside the clear waters of the Tapajos, to see stilt villages, rainforest and pink river dolphins.

Best for: The sights and sounds of the rainforest.

Don’t miss: Chilling out on a jungle beach. 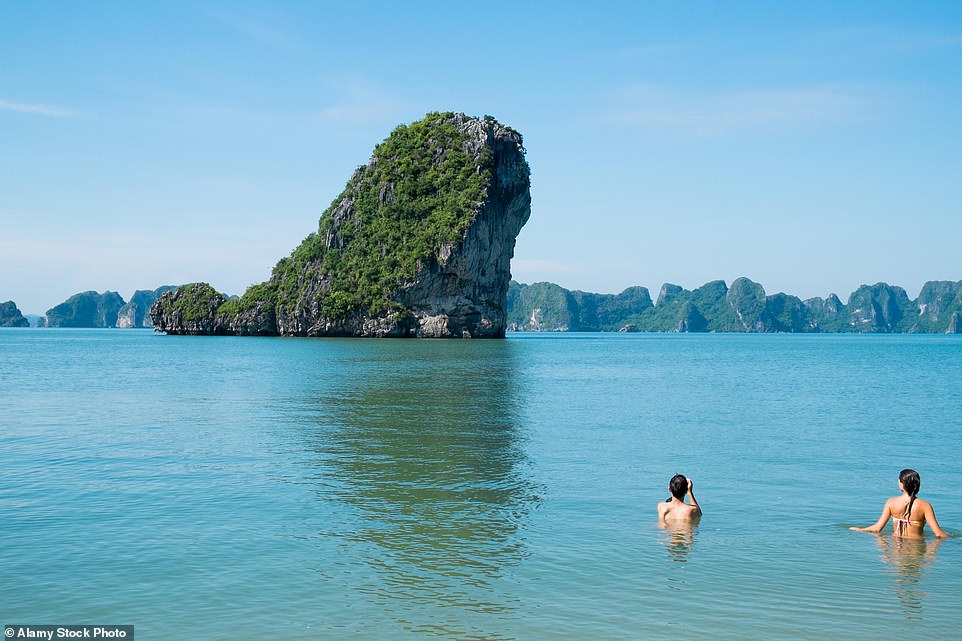 Pandaw cruise line sails the Red River and its tributaries Lo and Da, with a day in Hanoi, stopping at villages and with two days at Halong Bay (pictured)

Typhoons and torrential summer rain are partly to thank for the terracotta tones of Vietnam’s Red River. Not as well known as the Mekong, it runs from China through Vietnam and its capital Hanoi into the sea near magical Halong Bay, with its hundreds of limestone rocks and islands.

Pandaw cruise line sails the Red River and its tributaries Lo and Da, with a day in Hanoi, stopping at villages and with two days at Halong Bay.

Best for: Vietnam at its most colourful.

From Moscow to Astrakhan on the Caspian Sea, the Volga flows through a landscape barely changed in centuries, yet it is possible to cruise a 600-mile stretch east from Moscow to Volgograd (previously Stalingrad).

Onion-domed churches give way to mosques, with Russia’s Tatar culture evident in Kazan, capital of Tatarstan. The river loops around the Zhiguli mountains near Samara, where you can see Stalin’s wartime bunker, and there’s a call at cosmonaut Yuri Gagarin’s home town, Saratov.

Best for: Russia off the tourist trail.

Don’t miss: The 16th-century Kremlin, ringed by 13 towers, in Nizhny Novgorod (once Gorky). 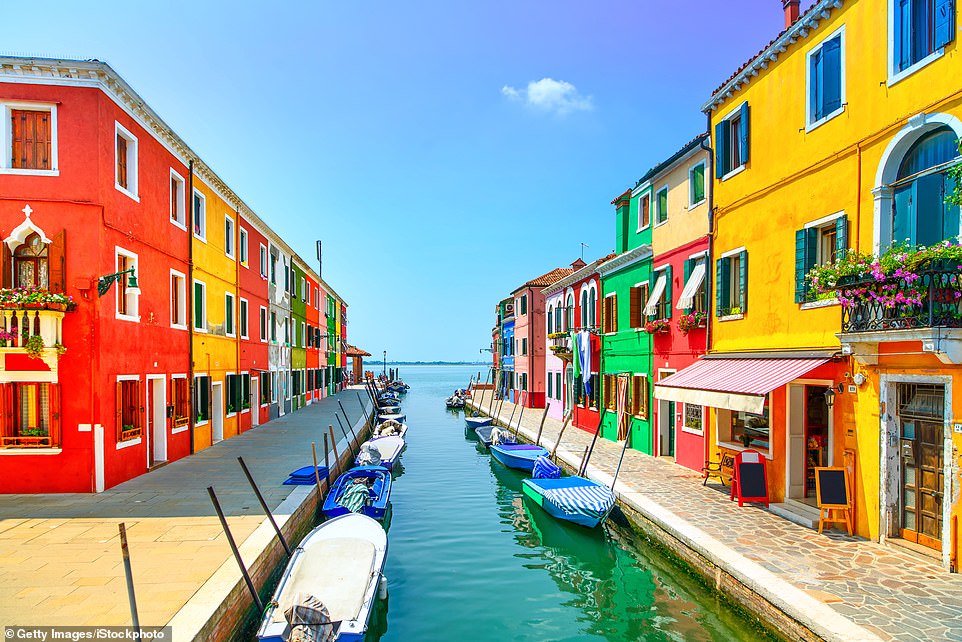 Flamingos and herons flock to the salt marshes of the Po delta, where Italy’s longest river flows into the Adriatic. It slips under the radar for many cruise fans, despite the attraction of Venice and islands including Burano, with fishermen’s houses painted as bright as the Riviera’s Cinque Terre ports. You can also visit Taglio di Po, a pretty holiday town on the river, and have lunch in Bologna.

Best for: A different view of Venice.