The Brownlow Medal Count has been held almost every year since 1924.

And while every ceremony has generated its share of headline hitting moments, the 2018 Count proved to be one of the most memorable yet.

Held in Melbourne on Monday night, the event was complete with shocking sartorial displays, awkward moments between some of the biggest celebrity couples, and a romantic kiss that stole the hearts of viewers watching across the country.

Sealed with a kiss: A romantic display between Brownlow Medal winner Tom Mitchell and his girlfriend Hannah Davis was one of the highlights of the 2018 ceremony, which was complete with shocking sartorial displays and awkward celebrity moments

While Hawthorn star Tom Mitchell, 25, received the coveted Brownlow Medal, it was his stunning girlfriend Hannah Davis who really had the crowd talking.

The blonde beauty planted a passionate kiss on Tom’s cheek after news that he had taken home the AFL’s highest honour.

But while there was romantic moments inside Melbourne’s Crown Palladium Ballroom, there were some different scenes on the red carpet outside. 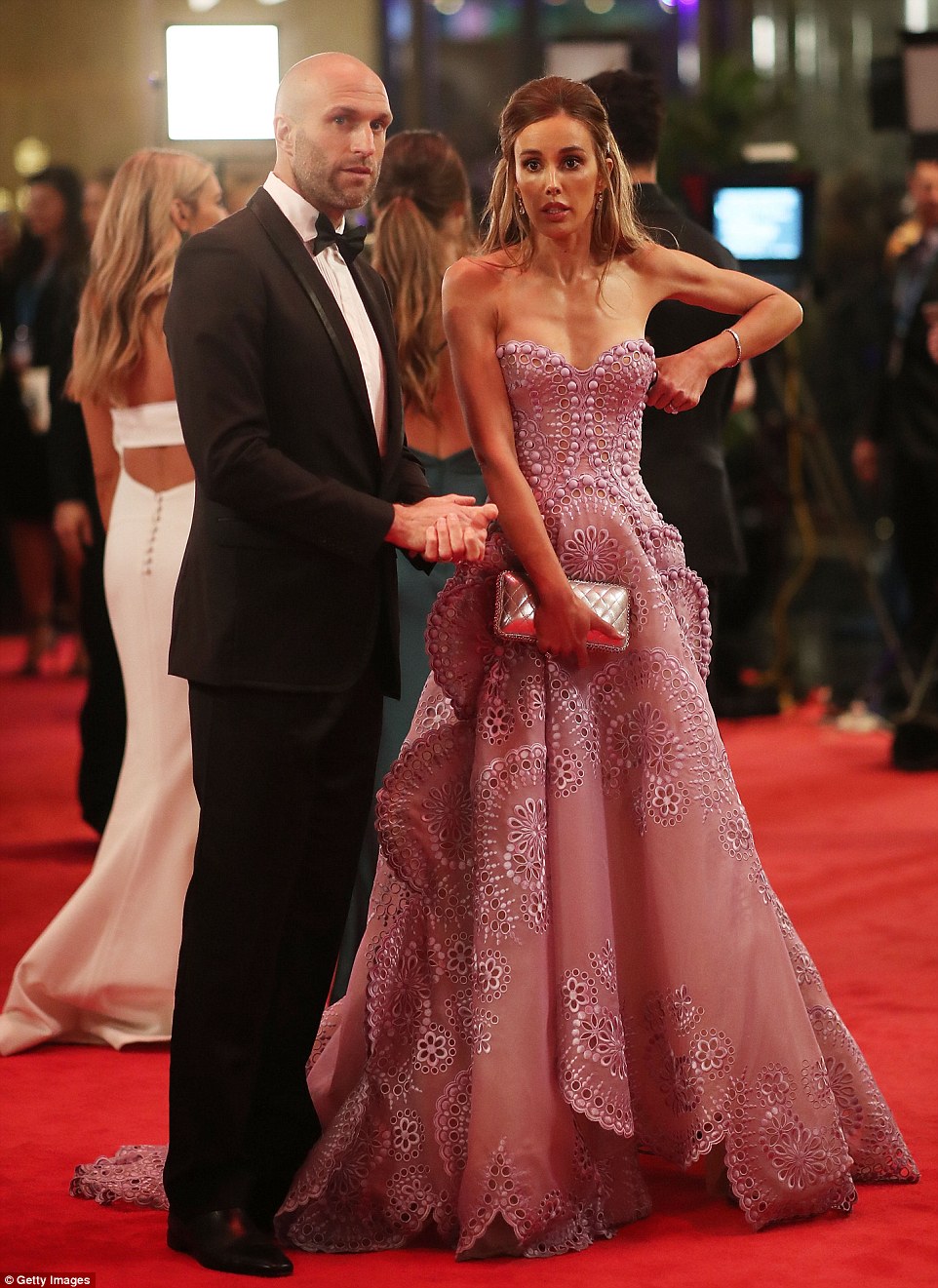 Is everything okay? With temperatures plunging below ten degrees, it appeared that chilly weather caused a tense moment between AFL super-couple, Chris and Bec Judd

With temperatures plunging below ten degrees, it appeared that chilly weather caused a tense moment between AFL super-couple, Chris and Bec Judd.

Exulted WAG Bec was seen shooting a stern look at her husband as they waited on the red carpet for photographs.

The wintery conditions were far from ideal for the brunette who opted to wear a strapless lilac gown. 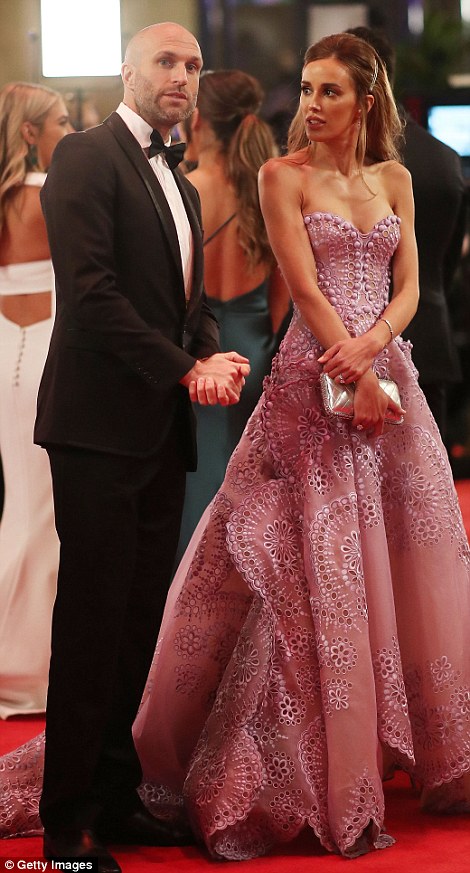 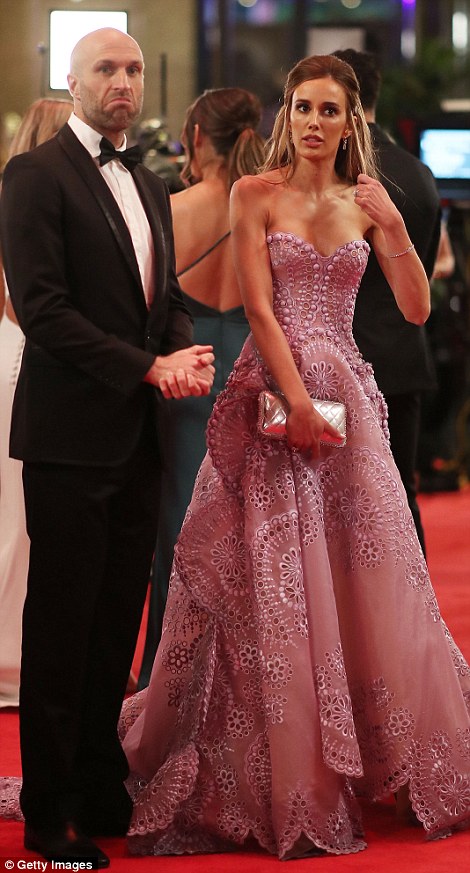 Super-couple: Exulted WAG Bec was seen shooting a stern look at her husband as they waited on the red carpet for photographs

Elsewhere, it appeared Sydney Swans star Lance ‘Buddy’ Franklin was in a hurry to hop off the red carpet.

Perhaps also bothered by the unseasonable weather, it looked as if the AFL superstar wanted to head indoors while his model wife Jesinta kept posing for the cameras.

The stunning blonde gave her million-dollar smile to snappers while Buddy hovered awkwardly beside her. 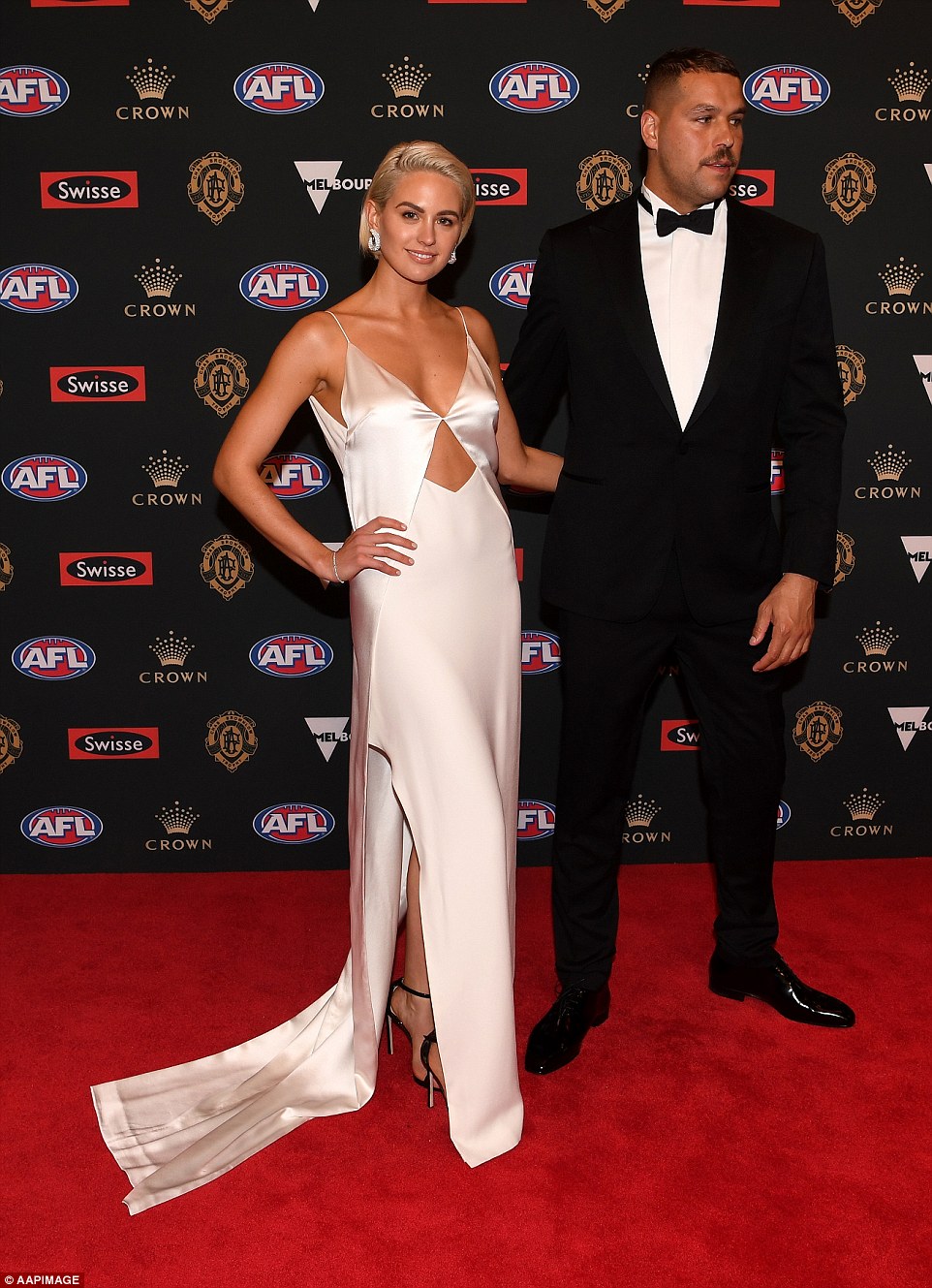 Wanting to head indoors? Elsewhere, it appeared Sydney Swans star Lance ‘Buddy’ Franklin was in a hurry to hop off the red carpet while wife Jesinta was happy to hover for the cameras 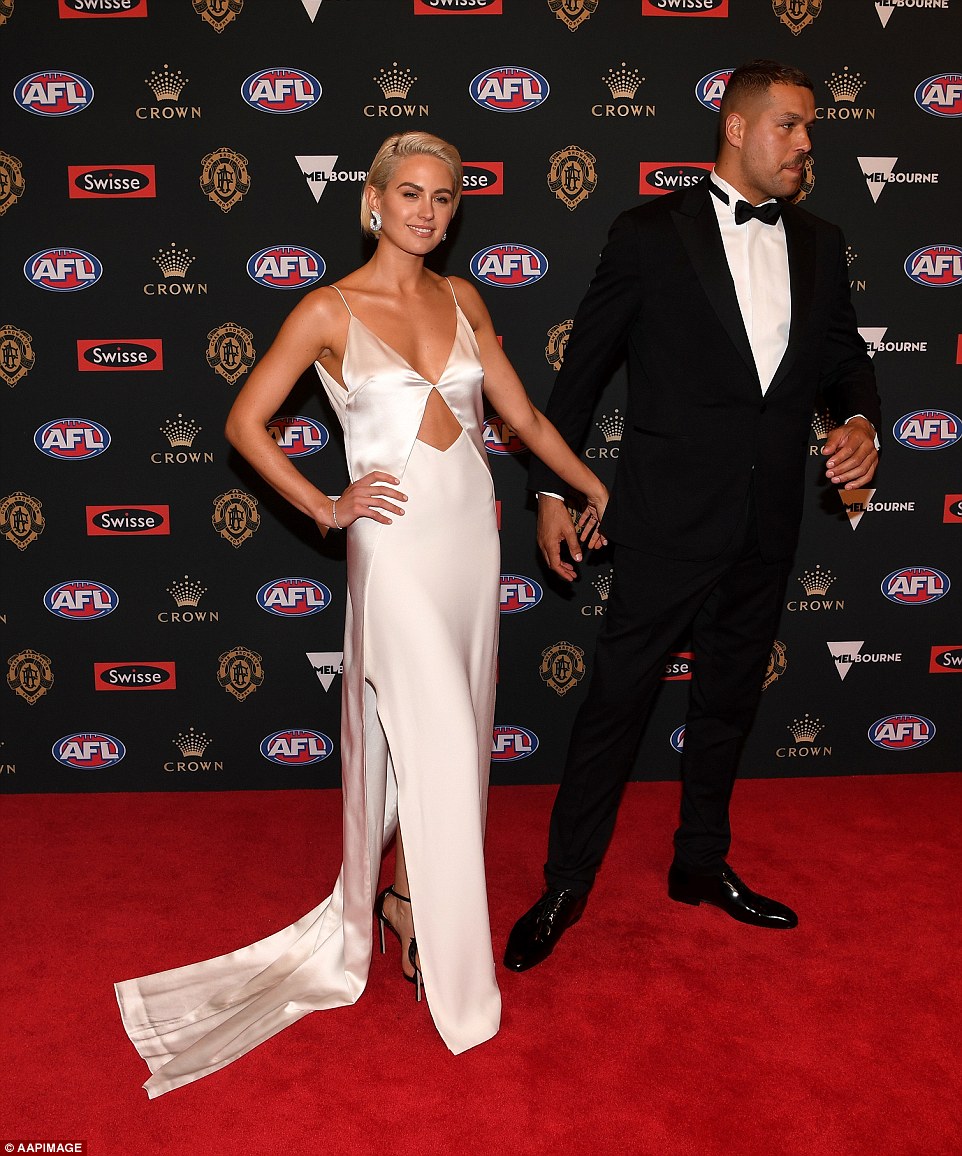 Awkward! The stunning blonde gave her million-dollar smile to snappers while Buddy hovered awkwardly beside her

The red carpet proved to be the centre of several shocking ensembles, including an eyebrow raising ensemble from 21-year-old WAG, Logan Shine.

Her beautifully chic bodice was complemented giant white feathered train that trailed behind her for metres and looked as if it would be more at home at the MET Gala. 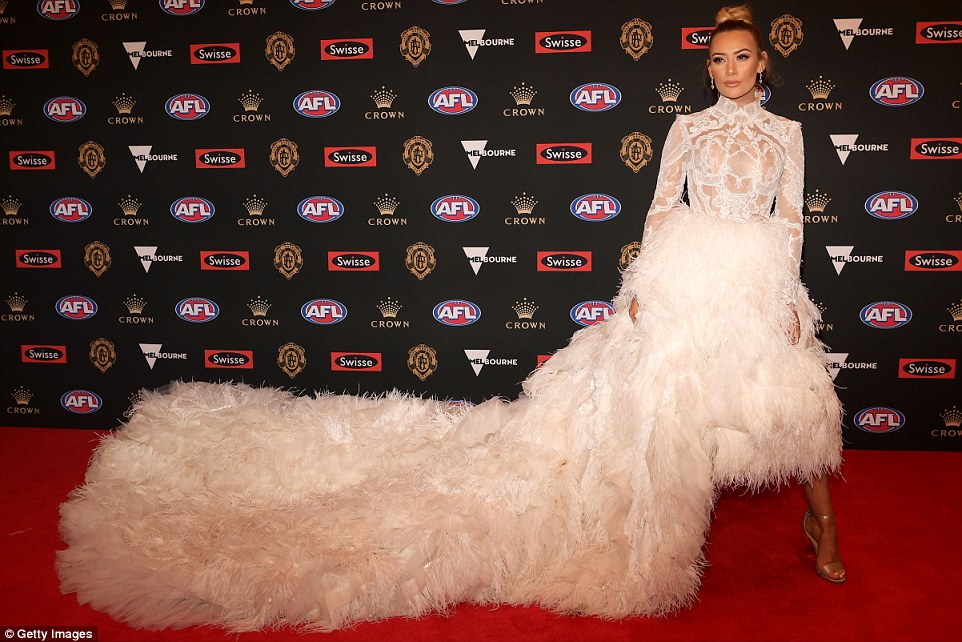 Another WAG to miss the mark was Emma Giles, the fiancée of St Kilda’s Jarryn Geary, who made a bold statement in a white plunging frock with a bizarre pleating of fabric from the knee down.

Mardi Dangerfield, the wife of Geelong’s Patrick Dangerfield, wore an unflattering orange ensemble that did little to accentuate her enviable figure.

Following behind her was Elli Brashaw, the long-time girlfriend of Fremantle’s Nathan Fyfe, who opted for an ill-fitting sheer gown with red sequin details.

While Brooke Cotchin made a bold fashion move as she took a risk in a very daring cut-out red dress with a plunging neckline.

The wife of Trent Cotchin from the Richmond Tigers seemed to miss the sartorial mark in the floor-length number, which featured a very racy thigh-high split and a dramatic train. 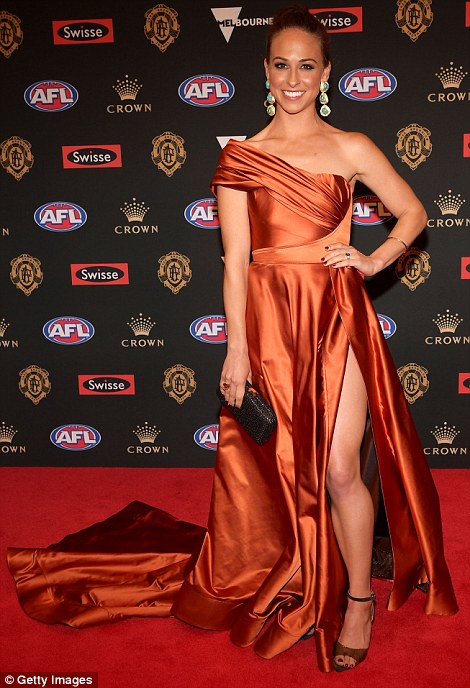 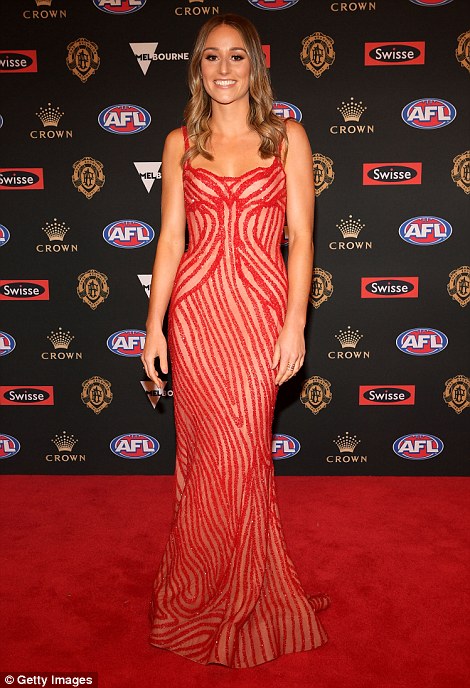 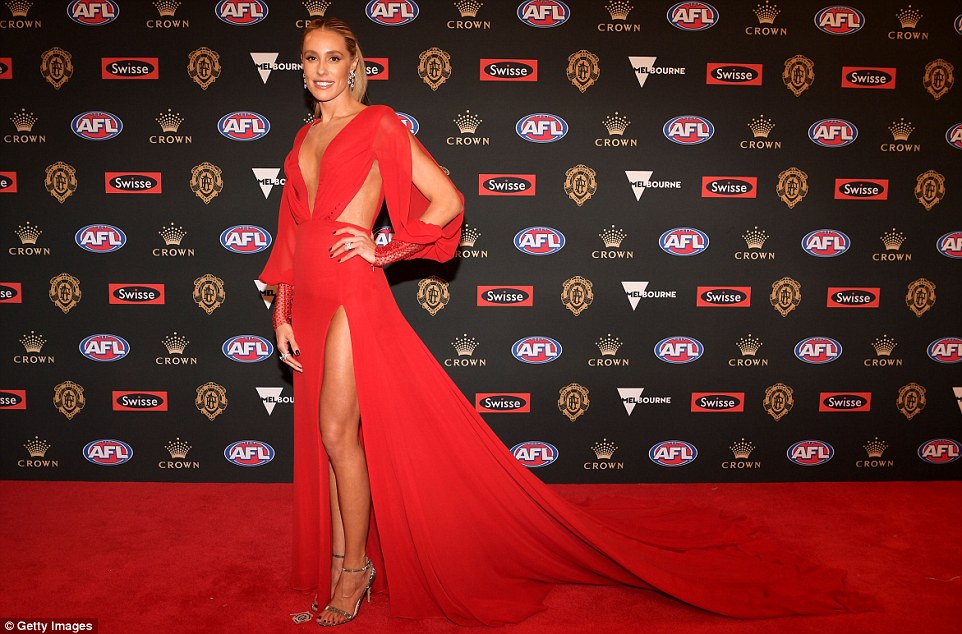 However, there were also some stunning showstoppers gracing the red carpet.

Jessie Murphy nee Habermann, wife of Marc Murphy, was nothing short of glamorous as she accentuated her svelte figure in a sheer pink frock by Oglia Loro Couture.

The young mother-of-one showcased her post-pregnancy frame in the strapless number with a racy thigh split to break up the dramatic layering of tulle.

The heavily pregnant wife of AFL star Jimmy Bartel dazzled in the form-fitting gown that featured strategic cut-outs at the back and flared slightly from the knees down.

Alice Gough, the girlfriend of Adelaide football club’s Paul Seedsman, made a stunning statement as she dazzled in a deep pink off-the-shoulder gown that featured a layered train.

Another WAG turning heads for all the right reasons was Charlotte Ennels, the model fiancée of Jack Viney, who stole the limelight in a sheer nude dress from OGLIA-LORO Couture.