A conspiracy in Downton Abbey, Lady Mary? Like as if! CRAIG BROWN on nitpicking viewers

There comes a time in everyone’s life, probably around late middle age, when they start to appreciate the simple, life-affirming joy of pointing out all the errors in films and TV dramas.

In my youth, I pitied people who wrote letters to editors complaining that 17 minutes and 35 seconds into the film of Ben Hur they had spotted a telegraph pole behind a chariot, or that in The Six Wives Of Henry VIII a court jester can be spotted wearing a Sony Walkman.

There are now entire websites devoted to such errors, written by people with nothing better to write, read by people with nothing better to read. Personally, I can’t get enough of them. One of my favourites concerns the film Braveheart, set in the 13th century. At the funeral of his beloved Murron, William Wallace (played by Mel Gibson) leans in to kiss her corpse. Just over his shoulder, you can see a white van in the distance. Bingo!

‘I just want to own my life,’ sighs Lady Edith (pictured), who had obviously been tuning in to the Jeremy Kyle Show on her Edwardian television

In the early days of Downton Abbey, viewers delighted in pointing out all the clangers — a TV aerial in the 1920s, a song played in 1912 that hadn’t been composed until 1918. Such nitpicking infuriated the show’s creator, Julian Fellowes, but this just spurred them on.

In turn, Fellowes suggested that the nitpickers must be a bit common. ‘The real problem is with people who are insecure socially,’ he said. ‘They think to show how smart they are by picking holes in the programme to promote their own poshness and to show that their knowledge is greater than your knowledge.’

Yet the nitpickers refused to be silenced. The scripts, they continued to point out, were full of words and expressions that would never have been uttered 100 years ago, such as ‘get shafted’, ‘get knotted’ and ‘as if!’ 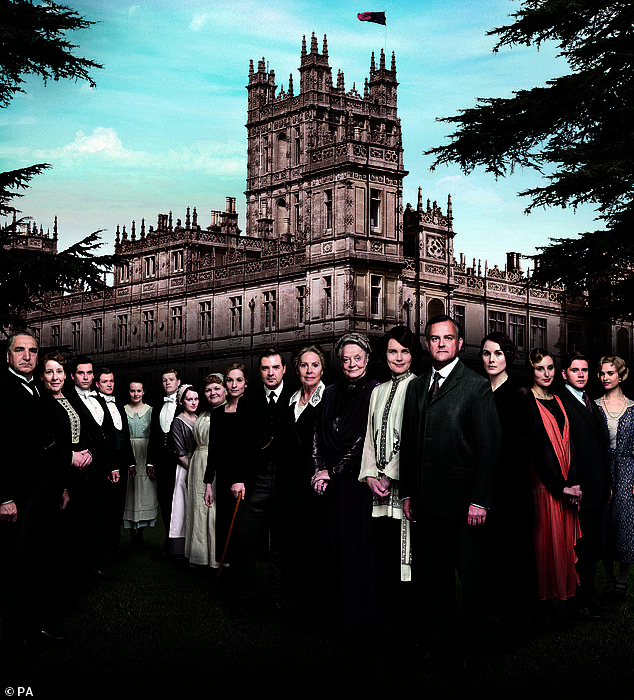 The other day, I went to see the Downton Abbey film, on the lookout for howlers. I didn’t have long to wait. ‘I just want to own my life,’ sighs Lady Edith, who had obviously been tuning in to the Jeremy Kyle Show on her Edwardian television.

At another point, one character complains to another about ‘an Establishment cover-up’. The other man replies: ‘I don’t believe in conspiracy theories.’

My research suggests that in employing the term ‘cover-up’, Julian Fellowes is on the money: the phrase came into existence in 1927, the year in which the film is set. But he is about 30 years ahead of his time in using ‘Establishment’ in the sense of ‘the important people who control the country’.

The Oxford English Dictionary states that ‘the term “the Establishment” as it is now popularly used, was introduced into the common language and speech of England on September 23, 1955’.

This was when the Foreign Office acknowledged the defection of the spies Burgess and Maclean to the Soviet Union. The journalist Henry Fairlie claimed to have coined the phrase in The Spectator at the time.

But, more recently, an eagle-eyed journalist noticed that the popular historian A.J.P. Taylor had first used it in the New Statesman magazine two years earlier, on August 29, 1953. Taylor wrote that ‘the Establishment talks with its own branded accent; eats different meals at different times; has its privileged system of education…’ and so on.

So when the character in Downton in 1927 speaks of the Establishment in this way, he is miraculously travelling through time.

And what of ‘conspiracy theories’? To my ear, this term sounded far too recent. It turns out, though, that it was first used in an article in The American Historical Review back in 1909, though it didn’t catch on.

All this begs the question: would characters in Downton really have subscribed to intellectual magazines in America?

Their conversation suggests that this is improbable. Etymologists agree that the phrase ‘conspiracy theory’ did not enter common parlance until late 1964, following the investigation into the assassination of President Kennedy, by which time most of them would have been dead and buried.

Reports indicate that the Downton Abbey movie is going great guns in North America, taking £24 million in its first three days. This suggests that the world is full of pedants, happy to shell out considerable sums for the sheer, unadulterated joy of spotting howlers. ‘Hey you guys!’ as the Earl of Grantham might say to King George V and Queen Mary, ‘High fives all round!’