By Josephine Forster for the Daily Mail

Small knots of people straggle down a hillside in the autumn sunshine, picking their way between rows of grapevines.

A few hold glasses that gleam golden in the sunlight; others make their way to wooden tables to crack open a bottle. It could be the South of France or California – but for several of the men wearing lederhosen.

This is Vienna’s annual wine trail, when the vineyards around Austria’s capital throw open their gates during the harvest. Local heurigers (taverns in the fields) have their own traditional open days until the season ends on November 11.

On the wine trail: Golden sunlight on the vineyards surrounding the Austrian capital, Vienna

I’m here with friends to explore the hills to the north of the city. Clustered around the River Danube, they enjoy a gentle micro climate that has attracted winemakers for centuries.

Uniquely in the world, there are 700 hectares of vineyards and 190 vintners within the city limits. Its wine trail is known by the tongue-twisting name of Wien Weinwandertag.

Fritz Wieninger, one of the city’s leading winemakers, greets visitors to his weinbau (vineyard) with his dog by his side.

‘These are the craziest days of the year,’ he says. ‘We are in the middle of the harvest.’ My friends install themselves at a table and call for white wine and a heaving board of charcuterie. 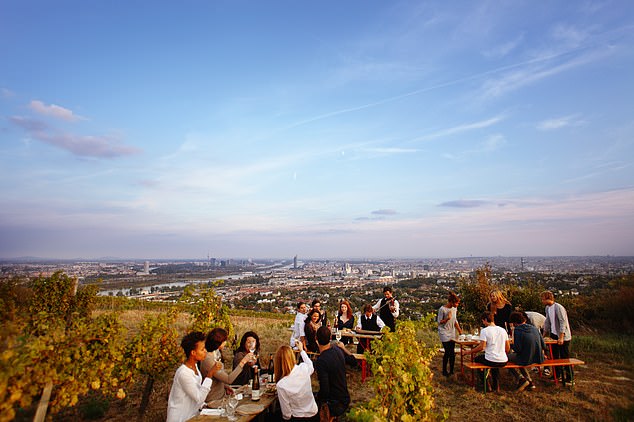 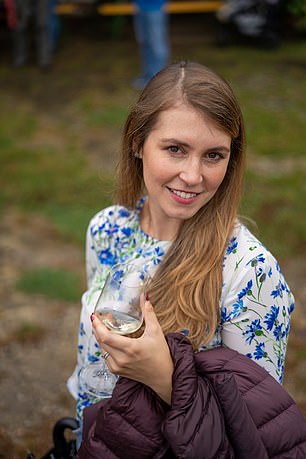 Josephine samples some of the local wine

Fritz recommends a Viennese wine – the Wiener Gemischter Satz, or ‘mixed set’ – made from three grape varieties grown and fermented together. Aromatic and dry, it goes down wonderfully.

We also share tankards of ‘young wine’ – the partially fermented result of this year’s harvest. It’s so fizzy it’s hard to bottle, so it’s typically drunk straight from the fields at this time of year. ‘Like a fizzy grape cider!’ is one verdict.

Sweet and light, it’s relatively low-alcohol (around 4 per cent). No bad thing – because we’d started drinking at 11am.

We set off from Hotel Altstadt in Vienna’s fashionable Museums Quarter. Trams go almost to the walk’s starting point and everything is impressively signposted. There are 15 miles of trails in total, with three suggested routes – we shamelessly opt for the shortest and most densely packed with wineries, a three mile walk across the Nussberg growing area.

After a steep, ten-minute climb, we arrive at a panoramic view over the city, and the Pedalones winery stall. I try a chilly Riesling while looking out at the Baroque buildings of the city and the river twinkling in the sunlight.

Austrian wines are harder to find in Britain than their German counterparts, with 75 per cent consumed in the country itself. 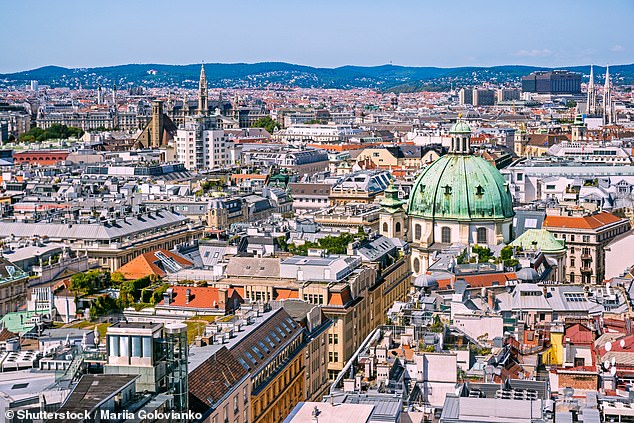 The hills to the north of Vienna, pictured, enjoy a gentle micro climate that has attracted winemakers for centuries

Overall production is less and, for a long time, Austrian wines had a poor reputation, something locals have worked hard to change.

Now, excellent reds are made in the south east, while Vienna and lower Austria produce e full-bodied mineral whites, with Riesling and Gruner Veltliner grapes the most popular.

You can buy bottles on the trail to take home, but, in general, you’d be better off picking them up later in the city centre.

‘The wine trail is a very strong sign of the Viennese way of life,’ Fritz tells me. I could get used to it.

BA (ba.com) flies London to Vienna from £99 return. Hotel Altstadt Vienna is a member of Small Luxury Hotels Of The World (slh.com). B&B doubles including afternoon tea cost from £151 (altstadt.at/en). For information on the wine trail, visit wien.info and wieninger.at/en.