A cycle tour of the Loire Valley vineyards

The farmland round here shakes when the world’s most famous endurance car race — Le Mans 24 Hours — hurtles through in June.

And all year round, petrolheads make a pilgrimage to the Hôtel de France in Chartre-sur-le-Loir, its walls lined with Le Mans memorabilia. But for those of us who regard cars as alien beasts, there’s a wonderful alternative — it’s called a bicycle.

And if you combine pedalling with lingering visits to vineyards, you’ll be very happy indeed.

Worth a spin: Consider combining pedalling and lingering visits to vineyards in the Loire Valey. Pictured: Chateau de Chambord

My first stop, on the outskirts of Chartre, is the cave of Domaine Gigou. ‘Cave’ here means cellar, but these tunnels, carved into the ‘tuffeau’ (soft limestone) are more like caves.

This is where the Gigou family makes wine — and it tastes particularly good after cycling 13 hot miles along the River Loire.

Wine-making is a cottage industry in this part of France, a mere hour from Paris on the TGV.

The Gigous — father, mother, son and daughter — pick grapes from vineyards on the hillside, crush them and put the juice in barrels to sell on-site. The cellar tour costs £4.35, or is free if you buy some wine.

After tasting two whites and a surprisingly good sparkling red the 86 degree heat doesn’t seem so punishing. Mind you, the Loire valley floor is comfortingly flat, apart from a gentle incline on the way back to the hotel. 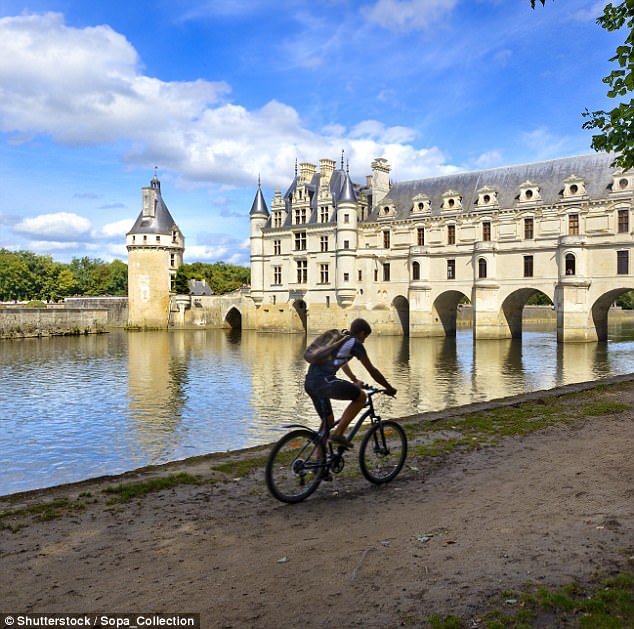 Pedal on: For avid cyclists, there’s the Loire cycle route, which is 90 miles of back roads and green paths. Pictured: Chenonceau Castle, Loire Valley

You can hire a bike at several places along the way. Rent them at the hotel and for £35 you get a packed lunch (cheese and ham baguette, a peach, apple tart and bottle of water), with two wine tours included.

You’re in la France profonde — deepest rural France. I bike for miles with only the occasional car overtaking me.

Eurostar and SNCF from London St Pancras to Tours, from £90 return, (eurostar.com).

On either side are poppy-fringed wheatfields, punctuated by creamy white Charolais cows. Every few miles, I whizz through a village built out of that same limestone as in the Gigous’ cellars.

As you criss-cross the lazy green waters of the Loire, you glimpse the vast, rural châteaux that perch above the river. I pass the marvellously named Château De Poncé, a 1542 pile with Renaissance frills and a vast wedding cake of a garden pavilion.

The famous châteaux —Chenonceau, Villandry, Azay-le-Rideau, Chambord and Blois — are about an hour’s drive from the hotel. Tours, with its medieval mansions and early Gothic cathedral, is 45 minutes away. This is the real France politically, too. I was told by one local that his village voted heavily for President Macron; the next one down plumped for Le Pen.

You wouldn’t see, or hear, any of this if you were driving. You would walking, but you wouldn’t cover much ground. Cycling is the ideal halfway house.