Locked in quarantine for two weeks, Sibylle Von Linde has travelled from Germany to reach her dying mum and hopes others won’t have to repeat the tough journey.

After three attempts, Sibylle Von Linde made it to Australia from Germany and hopes to see her terminally ill mother before it’s too late.

The past two weeks locked up in quarantine at the Howard Springs quarantine facility in the Northern Territory have been gut-wrenching as her mother’s condition rapidly deteriorated.

‘She has brain cancer,’ Ms Von Linde told AAP, breaking down in tears.

‘The worst thing is it’s two weeks and I’m here and can’t be with her.’

Ms Von Linde is due to leave quarantine on Thursday and will travel to the NSW Central Coast to be with her mother Irmi.

‘I applied twice and said my mum has cancer, but apparently it wasn’t enough to say ‘it’s really bad’,’ she said.

‘I had to have it in writing that she has only a couple of weeks.’

Three weeks ago Irmi could still walk, but ten days ago she had to get a wheelchair.

Now she can barely sit in it.

Her partner couldn’t travel with her from Munich because of the cost, which included $2500 for quarantine, and Australia’s travel ban, so Ms Von Linde is alone.

Others at the Centre for National Resilience in Howard Springs have started an online petition calling for a more humane quarantine system. 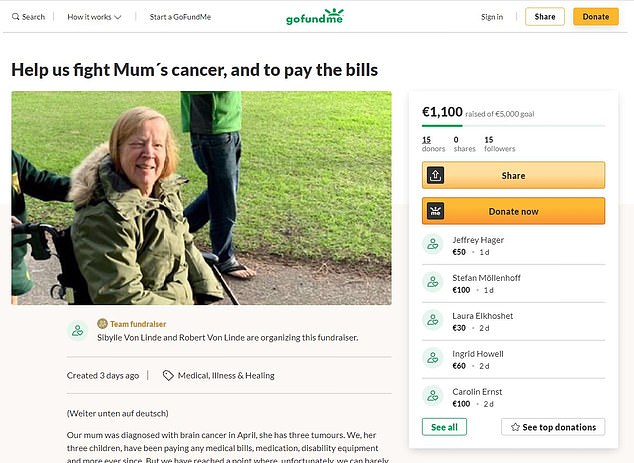 Ms Von Linde was told by the federal government it would not matter if she was fully vaccinated.

‘It wouldn’t have made a difference, which I don’t understand.’

A final attempt to enter Australia was approved, but her request to do home quarantine with Irmi was declined.

‘I hope my story helps someone after me, that’s enough.’