A day in the life of This Morning’s resident GP

A day in the life of a paramedic can involve a 12-hour shift, comforting heartbroken relatives and even treating stab wounds.

After ITV’s This Morning’s resident doctor Dr Ranj Singh joined the North West ambulance service for a shift, he learnt how the team work ‘day-in, day-out’, often without breaks, with no idea what the next 12 hours may bring.

Some are even physically and mentally abused by the very people whose lives they are trying to save, making them frightened of what they may encounter at every job.

At the end of a shift that involved having to break it to a husband that his wife had died and treat critical internal bleeding from a knife attack, Dr Singh said he felt ‘broken’ and without ‘the mental reserve to keep going’.

Last year, around 2,500 paramedics were signed off work for stress. 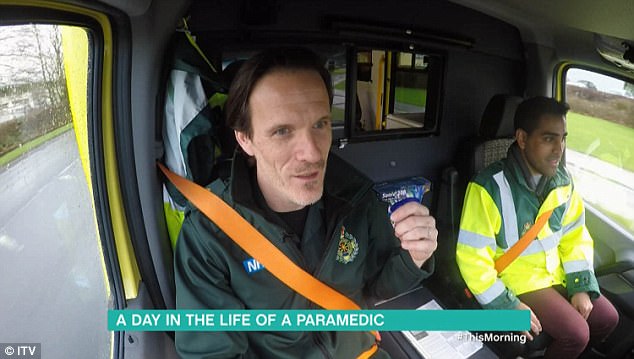 Patients waiting to be admitted were forced to wait for up to five-and-a-half hours on a Friday night  in December as 23 ambulances queued outside a hospital’s A&E department.

Queen Alexandra Hospital in Portsmouth, whose A&E department has previously been described by the Quality Care Commission as ‘chaotic’, experienced an ‘exceptionally difficult weekend’ after a backlog of patients turned up with flu and other respiratory and winter illnesses.

NHS figures released last week also reveal 1,336 people across the UK have been admitted to hospital with the winter vomiting bug, up from 790 the week before.

Experts said this spike in norovirus cases is adding pressure to hospital beds, with 94.6 per cent being occupied, which is causing the health service to buckle under the strain, according to an ITV Meridian report.

Shadow health secretary Jonathan Ashworth also blames the recent drop in temperatures for the increase in demand on hospital services.

‘A mistake can be life-threatening’

On the way to treat a life-threatening case of a ‘female not breathing’, with no further details, paramedic Pete Sutcliffe told Dr Singh: ‘I can’t think of many other jobs where for 11-and-a-half hours you have to be 100 per cent correct because a mistake can be life-threatening,’ ITV reported.

When they arrived at the scene, 85-year-old Elizabeth Roberts had suffered a cardiac arrest. Although they managed to get her heart beating again, she died shortly after arriving at hospital.

While battling with the shock of his loss, Mrs Roberts husband James said: ‘The people that worked on [her] were absolutely first class; so polite; got on with the job well.’

Vvisibly moved by what had happened, Mike Conlan, senior paramedic team leader, said the team always come together to support one another after losing a patient and take comfort in knowing they tried their best.

Some call outs are even more distressing, with Mr Conlan adding: ‘We deal with a lot of abuse on some scenes, sometimes you have to get the police involved.’

Back in the This Morning studio, Dr Singh told Holly and Phil: ‘It’s shocking that these people are there to save lives and sometimes [they] get treated the worst out of everyone.’ 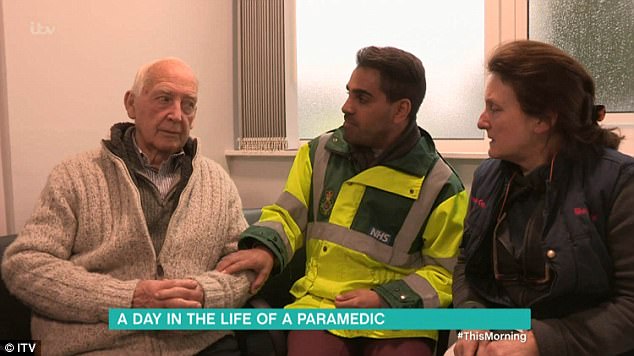 After an 85-year-old died from a cardiac arrest, Dr Singh comforted her daughter and husband James Roberts (both pictured), who described the paramedics as ‘first class’ 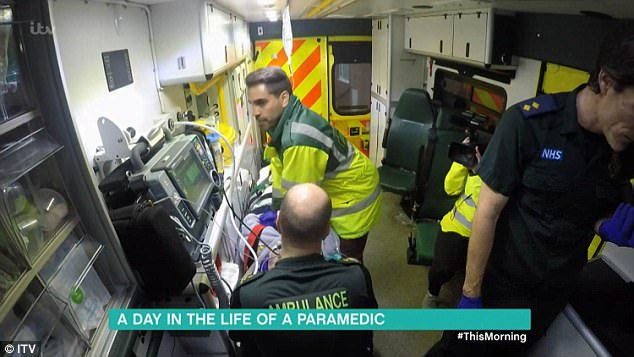 ‘I didn’t have the mental reserve to keep going’

After a busy working day, the last call out involved a knife wound, with the crew being unaware if the injury was accidental or a deliberate stabbing on the way to the incident.

Dr Singh said: ‘I was broken when the last call came in.

‘I didn’t have the mental reserve to keep going. Every day is unpredictable, you’re being pummeled with emergencies.’

Despite the job’s challenges, Dr Singh was amazed that the team managed to enter every emergency smiling, adding: ‘They are a passionate team of people who are there because they love their job.

‘They are being pushed and pulled [but] it’s not their fault; they are doing their very best’.