A dishier Rishi – and handsomer Hancock! 5ft 6in Sunak is played a by 6ft star in new TV drama

A dishier Rishi – and handsomer Hancock! 5ft 6in Sunak is played a by 6ft star in new TV drama… and didn’t we see the Health Secretary in Broadchurch?

He’s a politician known for careful cultivation of his personal image.

So Rishi Sunak is likely to be delighted that the actor chosen to portray him in a forthcoming TV drama is a towering 6ft 1in – a good 7in taller than the Chancellor is in real life.

Mr Sunak is said to be teased about his height by colleagues, and recently posed with his Treasury team on a flight of stairs, apparently to distract from his 5ft 6in frame. One Twitter wag has even dubbed him the ‘pocket calculator’.

But in This Sceptred Isle, a new Sky Atlantic drama about Boris Johnson and Carrie Symonds, Mr Sunak is to be played by the lofty Shri Patel, who has appeared in small theatre productions and adverts for firms including Matalan.

His political experience is limited to playing the Prime Minister’s aide in a single episode of Pennyworth, an American crime drama based around the life of Batman’s butler Alfred. 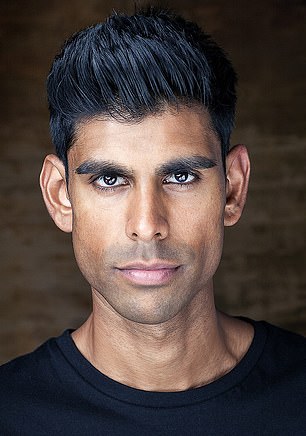 Rishi Sunak (left) is likely to be delighted that the actor chosen to portray him in a forthcoming TV drama, Shri Patel (right) is a towering 6ft 1in – a good 7in taller than the Chancellor is in real life

‘Dishi Rishi’, who has also been spotted standing on a box behind a podium during a speech, is not the only Cabinet Minister who may feel pleased with the casting decisions on This Sceptred Isle.

Matt Hancock will be played by Andrew Buchan, who previously played grieving father Mark Latimer in ITV’s Broadchurch and who has even been suggested as a possible James Bond.

Father-of-two Mr Buchan, who is married to former Emmerdale actress Amy Nuttall and also played Andrew Parker Bowles in the third and fourth series of The Crown, is the subject of several websites where fans eulogise about how handsome he is.

By contrast, in a poll of 2,000 users of the adultery website Illicit Encounters, Mr Hancock emerged in second place for least-sexy male MP.

After first revealing earlier this year that This Sceptred Isle was being made, The Mail on Sunday has reported some of the fictional storylines dreamt up by writer Michael Winterbottom, including the Prime Minister ‘plagued’ by dreams of ‘the women in his life’ and of ‘babies being born’; that he is jealous of a fictitious ex-boyfriend of Ms Symonds while she is worried about his closeness to a female physiotherapist.

Lee Cain, the former director of communications at No 10 who dramatically quit last November, will be played by Liverpudlian Derek Barr.

The 36-year-old actor previously played Brian, a drunk gay man who hates Margaret Thatcher, in the 2014 film Pride set during the miners’ strike. 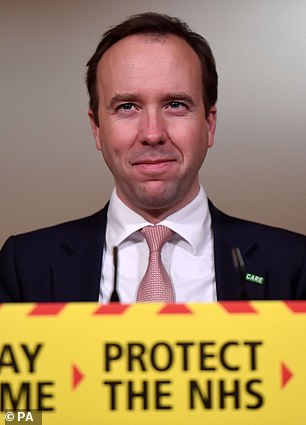 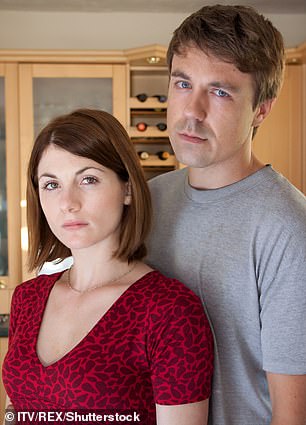 Matt Hancock (left) will be played by Andrew Buchan (right), who previously played grieving father Mark Latimer in ITV’s Broadchurch and who has even been suggested as a possible James Bond

James Slack, who replaced Mr Cain, will be played by Simon Lowe. The 47-year-old actor’s CV includes stints on the soap operas EastEnders and Crossroads.

Ben Lloyd-Hughes, 32, who is best known for his role in teen drama Skins, will portray Ben Gascoigne, the Prime Minister’s political secretary and adviser.

Sky Atlantic has confirmed that This Sceptred Isle, which stars Sir Kenneth Branagh as the Prime Minister and Ophelia Lovibond as Ms Symonds, will carry a disclaimer when broadcast next year warning viewers that the story is fiction.

Producers also changed the name of the PM’s love child after the MoS revealed she would feature in the show, which is expected to air in the autumn of 2022.