An adorable family of ducks have brought peak-hour motorway traffic to a standstill.

The surprising duck crossing on a motorway in Auckland, New Zealand was recorded by a traffic monitoring system at 7.45am on Friday.

The footage shows the family of ducks brazenly enter traffic and make their way across multiple merging lanes on the Northern Motorway.

In the video, a mother duck is seen leading her little ducklings across the first lane of traffic, causing a white 4WD to slow down and stop.

The mother duck quickly waddles ahead before her little ducklings hasten their step to catch up with her.

A small white car in the second lane then slows down and turns on its hazard lights to allow the family of ducks to cross its path and proceed onto the median strip. 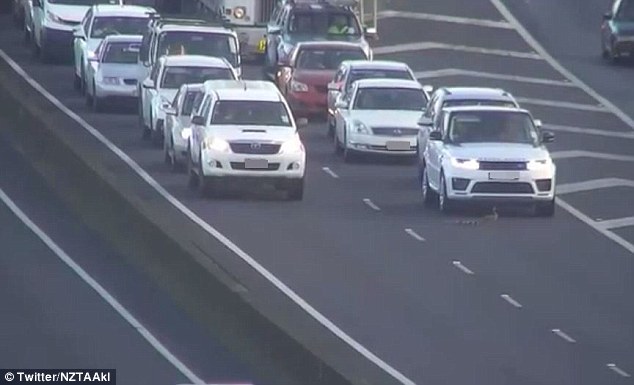 A mother duck (pictured) is seen leading her ducklings across the first lane of traffic, causing a white car to slow down and stop

The mallards then continue to walk into the third lane and in front of five more oncoming cars, which slow down to allow the ducks to pass.

The little ducklings eventually meet with their mother duck, who is standing near a motorway dividing wall and the video ends.

Officials for the New Zealand Transport Authority uploaded the adorable video to their Twitter account with a tongue-in-cheek message for commuters with the hashtag ‘becauseitsfriday’.

”Please allow a little extra time citybound on the Northern Mwy this morning with minor delays due to ducks crossing near Tristram Ave,’ the post stated.

‘NZ Police are now escorting all to safety.’

Many commuters found the traffic update about the daring duck crossing comical, with some sharing their thoughts on social media.

‘Going to need some more duck lanes,’ one person worte.

Another person said, ‘Why did they build a motorway over a duck crossing??’