A fiesta of fun! (for fast-moving young families)

I wish Noah could instantly be 18 (as opposed to nine and a half) for a day or two every now and again so he could start testing these ever more naked, ever more raw, powerful and pesky hot hatches Ford keeps churning out.

It’s a young man’s job, for heaven’s sake, not that of a slightly creaky, secretly balding 52-year-old with a growing reluctance for unnecessary discomfort and a brace of hip-replacement operations on the horizon. Even my fearless mechanic pal Tim looked a little bit trepidatious at the prospect of throwing this new ST – the hot version of Britain’s best-selling car – around the twisty roads of Berkshire.

‘I can’t believe the power they can create nowadays,’ he said. ‘I had a Ford Sierra Sapphire RS Cosworth when I was 22 that had one more cylinder than this Fiesta and 500ccs more under the bonnet, not to mention a bigger turbo. 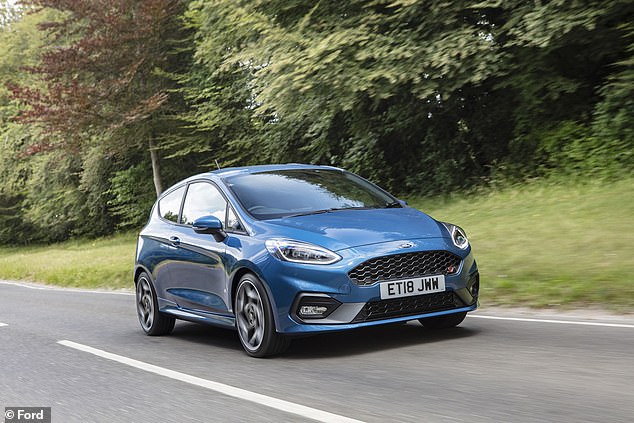 ‘If you’d told me that in two decades’ time my precious Cosie’s spoiler would be whipped into submission by a new Fiesta, I’d have laughed you out of town. Well, I’m not laughing now.’

More of which in a moment.

Visually, for a brand-new three-door hot hatch, this Fiesta ST is surprisingly on the tame side. A little too tame we – that is me, my wife Tash, Tim, my nephew Mark, his fiancée Tania, and my sons Noah and Eli – all thought at first.

This could be down to the rather grown-up Performance Blue paint job (a £745 option), which seems to smooth out the more sporty features. On closer inspection, things are more exciting than they first appear, with a refreshing lack of fakery for the sake of it.

All frills, grilles, air intakes etc seem to be there for an actual reason this time around, as opposed to merely acting as cosmetic façades covering blanked-off panels, with exhaust outlets leading to nowhere.

We were most taken with the uncluttered, honeycombed front and the classy, fun-packed rear end with its twin tail pipes, under-valance diffuser and rooftop spoiler. In profile, the offset double swage on the lower and upper doors also comes across as effortlessly elegant and classy for such a small car. 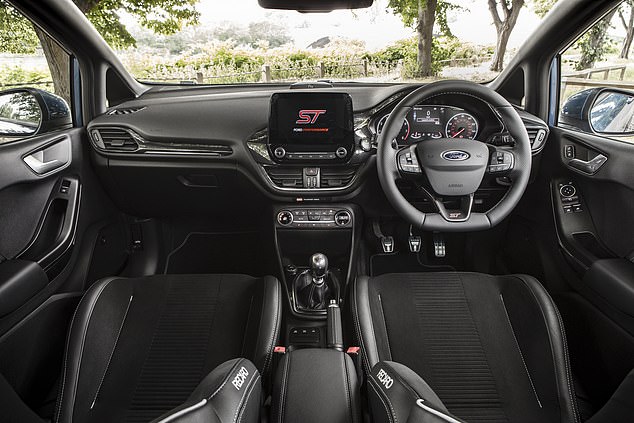 Once you’re belted in, a youthful, energetic vibe immediately takes hold, primarily due to the fact that the whole interior is stylish, sporty and well-equipped

Once you have clambered your way over the cumbersome, clumsy, stubborn (but uber-cool) Recaro front sports seats, it’s all a bit tight, dark and stark in the back – not that my kids minded. They loved every second, in fact, whereas I think I’d have been screaming to be let out after about five minutes. Either that or throwing up over the front-seat passenger and whoever was driving. Talking of which, the whole of the front of the cabin is awesome to look at, and those troublesome front seats are a godsend when it comes to holding you in place.

Once you’re belted in, a youthful, energetic vibe immediately takes hold, primarily due to the fact that the whole interior is stylish, sporty and well-equipped. The controls and equipment are clearly marked and well laid out, with the odd exception of the engine start-stop button, which is mysteriously hidden by the steering wheel and indicator stalk. Very un-Ford-like.

Crucial stuff such as the climate controls are easily adjusted with minimal distraction to the driver, and the centre function screen has every feature you’ll ever need, again clearly marked and easily navigated. The Bang & Olufsen premium sound system (an excellent value option fitted to our car at a cost of £350) does what it says on the tin, with connectivity to match.

Not sure about the Performance Shift Lights, though, which come with the £850 ST Performance Pack. I can’t remember hankering after that level of optional information as a fully paid-up boy racer more than 30 years ago.

Finally, to the main event and the incredible alchemy with which Ford has created 200hp and 290Nm of torque from a twitchy three-cylinder, 1.5-litre, turbocharged engine. ‘I’d love to know how,’ said Tim, befuddled by such miraculous wonder. Of course, there is no one thing responsible. It’s down to a combination of engineering talent and Ford’s tenacity where turbo technology is concerned. And what about that exhaust note? How do they make something sound so deep, rasping and fruity when it’s coming from a penny whistle?

Of course, none of the above would matter in the slightest if nothing much happened when it came to applying the gas. The good news is that it does. The car feels very quick and capable in any of its three driving modes: Normal, Sport and Track (Track automatically turns off all electronic driving assistance by the way – you have been warned). Wind this latest ST package up in any of the above configurations and it’s like trying to control a creche of three-year-olds who’ve been let loose in a warehouse full of M&Ms. There’s heaps of sophisticated power being channelled through a relatively rudimentary front-wheel-drive system and the gearbox is super-tight and precise with a racy short throw.

‘Peter! With great power comes great responsibility,’ Spider-Man’s uncle said just before he croaked. Which may be true when it comes to handling a super-power to vanquish evil, but not when it comes to this insane hot hatch. For that’s what we have here. If you haven’t yet experienced severe understeer around an unexpectedly tight turn, with reverse camber and a mixed hedge (or, even worse, a dry stone wall), you have still to transit one of life’s most hair-raising rites of passage.

Go all the way and switch it to Track mode and you are jiving with the devil. Stand by to exit roundabouts on full opposite lock with full throttle understeer. In this mode, the ST is barely controllable, but then again anyone driving like this is probably out of control generally. 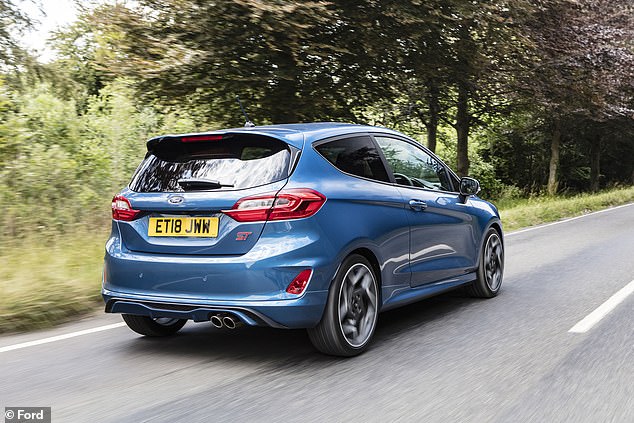 All frills, grilles, air intakes etc seem to be there for an actual reason this time around, as opposed to merely acting as cosmetic façades

Ease off a little, however, save Track mode exclusively for, er, the track and there’s tons of fun to be had, with the added thrown-in bonus of perhaps even staying alive.

At no point, not for even a millisecond, did I find driving the Fiesta ST a pleasant experience. It was, however, permanently engaging and exciting. Which is exactly what this car is meant to be. Plus, at just over £21k as standard (the one I tested was just under £25k with a few choice options), I think it’s pretty much worth every penny.