Seldom does one leave a hotel with a feeling that you might have made a difference. You do here at the Good Hotel, a former floating prison that was towed across the North Sea two years ago and is now moored at London’s Royal Victoria Dock.

The man behind it is Dutch entrepreneur Marten Dresen, founder of the Good Hospitality Group, who — as the story goes —was backpacking in Guatemala when he came across a young girl called Mirna.

She was not wearing shoes so he bought her a pair; such was the reaction from her family that he decided to raise money for a school, which opened in 2009. 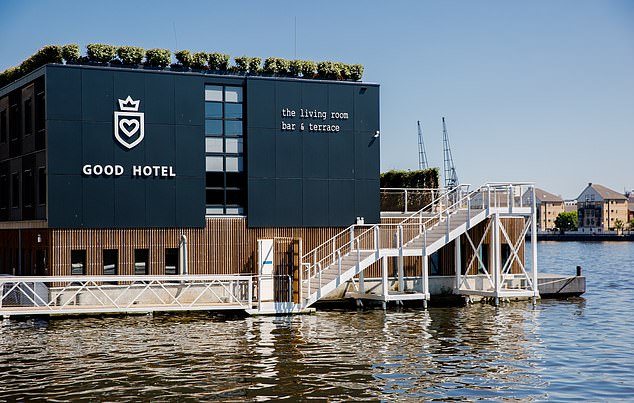 The Good Hotel, a former floating prison that was towed across the North Sea two years ago and is now moored at London’s Royal Victoria Dock

Then came the Good Hotel in Amsterdam, before it moved to London, offering hospitality training to the unemployed in East London via a shared scheme with Newham Council.

‘Create beauty. Be good,’ says a sign in the Living Room, a huge open space where people are encouraged to pop in and make use of the free wi-fi and reasonably priced food and drink.

There are some 150 rooms that were once cells. They are small but all have little shower rooms. There are no TVs.

We plonk ourselves down on a sofa and order a couple of delicious burgers and a bottle of pinot noir.

A couple join us and we get chatting. The woman grew up in the Docklands in the Sixties. ‘I just wish me nan was here — she would be 102 — to see what it’s like now,’ she says. 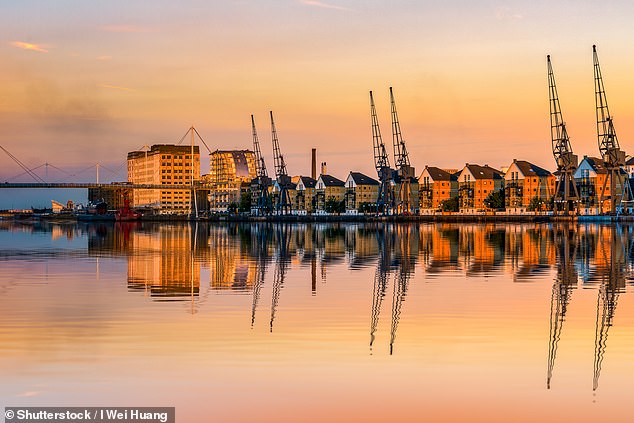 The hotel is in the heart of London’s Docklands. There are some 150 rooms that were once cells

‘My partner and I treat the hotel as our local boozer.’ The idea was that after five years the Good Hotel would float off somewhere else, but discussions are ongoing with Newham Council to keep it here a lot longer.

We hope it stays. It might not be a thing of beauty but it’s doing something positive and we like waking up on Sunday morning and seeing hearty swimmers in the water.

Breakfast is a big buffet for £9, and it seems quite natural to share a table with a family of Germans, who tell us they wouldn’t dream of staying anywhere else in the capital.