A gastric band can lead to DIVORCE

People who have weight loss surgery are more likely to split from their romantic partners, according the results of a new study.

A large Swedish study found that as people’s weights change following the operation, so do their relationships, as single people become more likely to start new relationships, and committed ones tend to leave theirs.

Weight loss surgery is the single most effective treatment for obesity and the operation is wholly life-changing for many who undergo it.

But those changes, the new study suggests, may not be limited to the people getting the operation as their relationships shift afterwards.

Three times as many people in the world are obese now as were in 1975, raising the risks that they – and their children – will suffer from life-threatening heart disease and diabetes.

Despite public health efforts and countless diets and weight loss programs claiming to offer the secret to success, doctors in the US and abroad stand by bariatric surgery as by far the most effective treatment for those who struggle to control their appetites.

These procedures – including gastric bypass, band and sleeve operations – alter the shape of the gastrointestinal system and can lead to metabolic and hormonal changes.

In combination with good nutrition and physical activity, weight loss surgery can cut risks of, improve and even reverse obesity-related conditions like high blood pressure, diabetes and heart disease.

The physical health benefits are clear and more and more doctors are urging those who are candidates for bariatric surgery to go ahead with it.

In 2016, approximately 216,000 weight loss surgeries were performed in the US, according to estimates from the American Society for Metabolic and Bariatric Surgery – a 37 percent increase from rates in 2011.

But as these operations become more common, research is just beginning to reveal how they affect other aspects of patients lives, such as their mental health and relationships.

‘There has been a worldwide increase in the number of persons undergoing this treatment in recent years and, in 2013, nearly 470,000 bariatric procedures were performed globally,’ said senior study author Dr Per-Arne Svensson of the University of Gothenburg.

Some studies have recently suggested that there may be a ‘ripple effect’ with dieting and weight loss, meaning that if one person diets and makes progress toward a healthy weight, their partner is more likely to do the same. 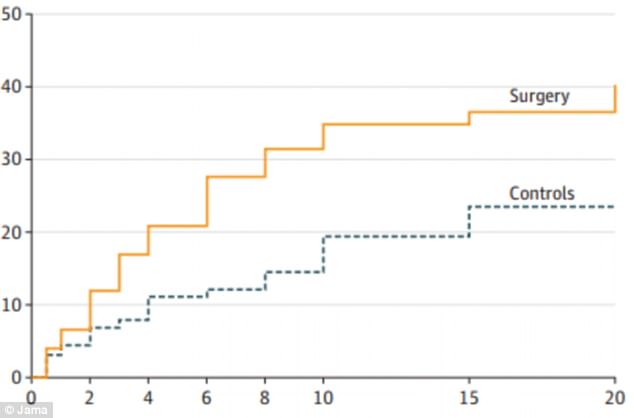 Single people who may have felt a confidence boost after weight loss surgery, on the other hand, were more likely to get married or start a new relationship

But, according to the new study, a very different phenomenon may follow surgery for weight loss.

Dr Per-Arne Svensson and his team analyzed data on two groups of subjects.

The first cohort consisted of 29,234 patients who had gastric bypass surgery compared with 283,748 control subjects who were followed over about two years.

The second group compared 1,958 obese adults who had bariatric surgery and 1,912 obese individuals who did not, and tracked them four 10 years.

By the end of the study, rates of divorce were higher among those who had had weight loss surgery than they were in either the obese group that did not have an operation or in the general population.

On the other hand, those that were single when they got their surgeries were also more likely to get married afterwards, as compared to other obese people or non-obese people.

That is exactly what happened for reality TV star ‘Mama June’ Shannon, who underwent a total body transformation, including gastric bypass surgery and has since found love – and moved in with – her boyfriend, Geno.

‘Although improvement in health is usually stated as the main motivator among persons who are about to undergo bariatric surgery, the desire to find a partner is sometimes mentioned among other secondary motivators,’ said Dr Svensson.

So, ‘for persons with obesity who are single, a better chance of finding a partner might be added as yet another positive association of bariatric surgery-induced weight loss,’ he added.

But the increase in divorces and separations shows that weight loss surgery may not affect all relationships equally.

Though divorce and separation are not, in the most general sense, not positive outcomes, these life changes may be secondary signs of new-found confidence.

‘Increased incidence of divorce and separation after bariatric surgery might be associated with increased tension in already vulnerable relationships or to improvements that empower patients to leave unhealthy relationships,’ said Dr Svensson.