A great time to be on holiday? Europe’s tourist hotspots are still free from crowds

Some of Europe’s most famous landmarks are still nearly deserted even as the continent starts to emerge from lockdown.

St Peter’s Square in the Vatican – often heaving with worshippers – has been nearly empty except for a handful of visitors and nuns even after the basilica re-opened its doors.

In Venice, gondoliers are back on the canals but the boats have sometimes been running empty, in contrast to the usual traffic jams on the water and overcrowding in the narrow streets.

Tourists have also started to reappear in Athens, hiking around the Acropolis in relative solitude compared to the usually busy crowds in the Greek capital.

In Paris, the Champs de Mars park which leads to the Eiffel Tower re-opened earlier this month but has sometimes been deserted.

While some landmarks have opened their doors, including St Peter’s Basilica and the archaeological sites in Greece, others such as the Eiffel Tower and Rome’s Colosseum must still be viewed from a distance.

In addition, most of these landmarks are still out of reach for foreign visitors because of travel bans and compulsory quarantines – although Greece is among those planning to resume its tourist season soon.

The UK government is still advising Britons against any non-essential foreign travel, and Greece and Cyprus are both initially set to leave Britain off their ‘white lists’ of approved countries.

VATICAN CITY: A deserted St Peter’s Square today – which often has long queues and crowds of worshippers –  as seen from outside St Peter’s Basilica which has re-opened to visitors after the two-month coronavirus lockdown in Italy 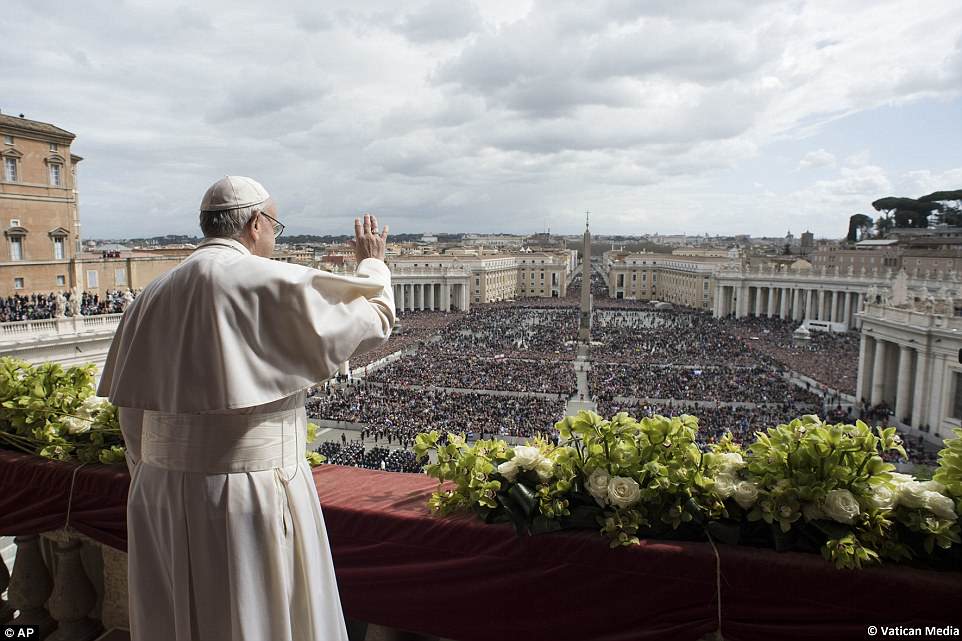 A sea of people in St Peter’s Square in 2018, when Pope Francis addressed a crowd of worshippers on Easter Sunday, delivering his traditional Urbi et Orbi message. A highly unusual extra blessing was scheduled this year because of Covid-19 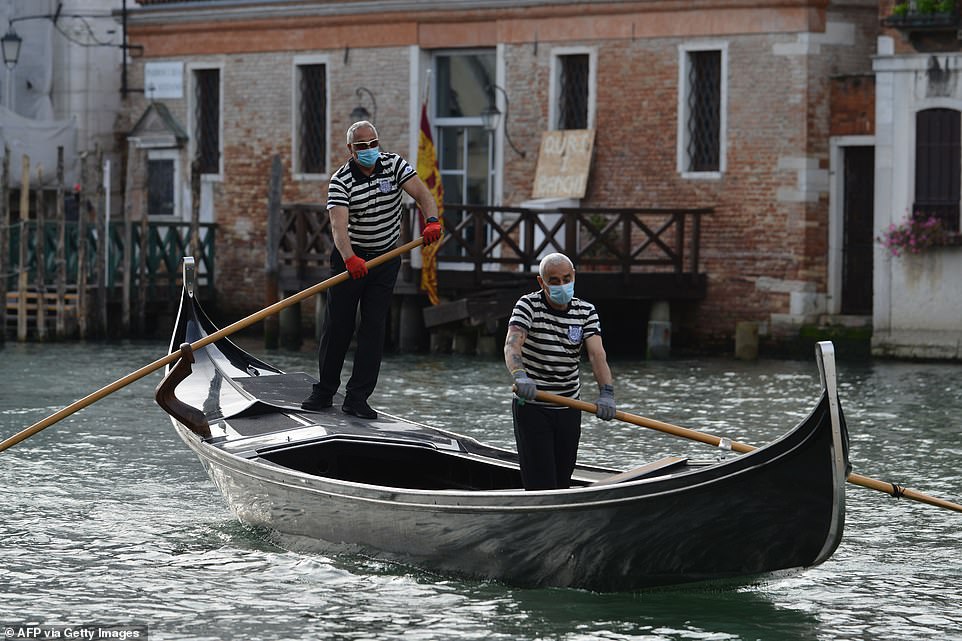 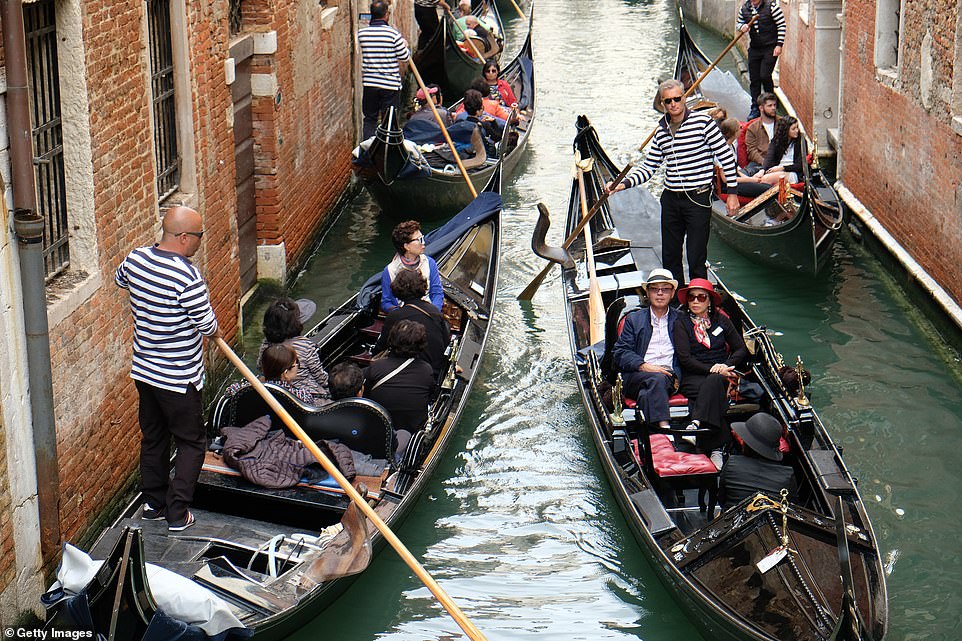 Venice often suffers from overcrowding with tourists packing into gondolas for expensive boat rides, as seen here with four gondolas in a small canal in May 2019 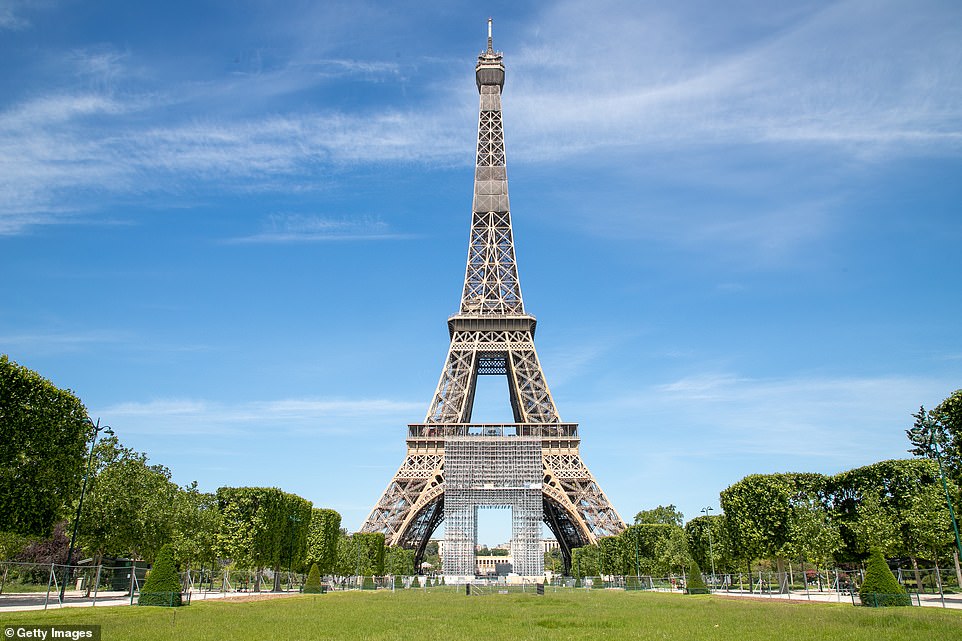 PARIS: The Eiffel Tower and an empty Champs de Mars last week, after the park re-opened on May 11. The tower has been displaying messages of thanks to key workers during the lockdown 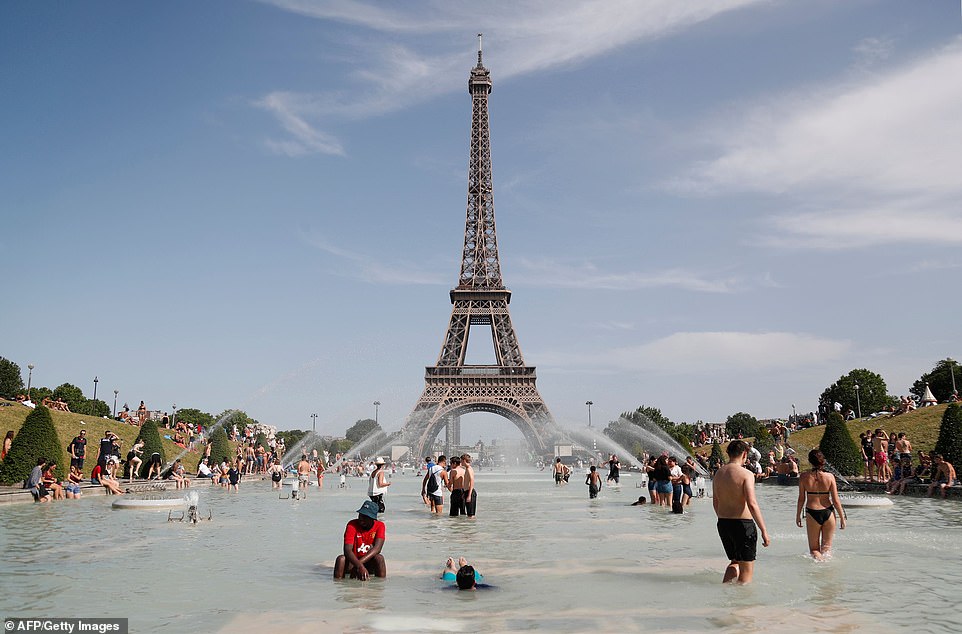 A view of the Eiffel Tower in June 2019, when people were cooling themselves in the Trocadero Fountain during a severe heatwave which saw record temperatures in France 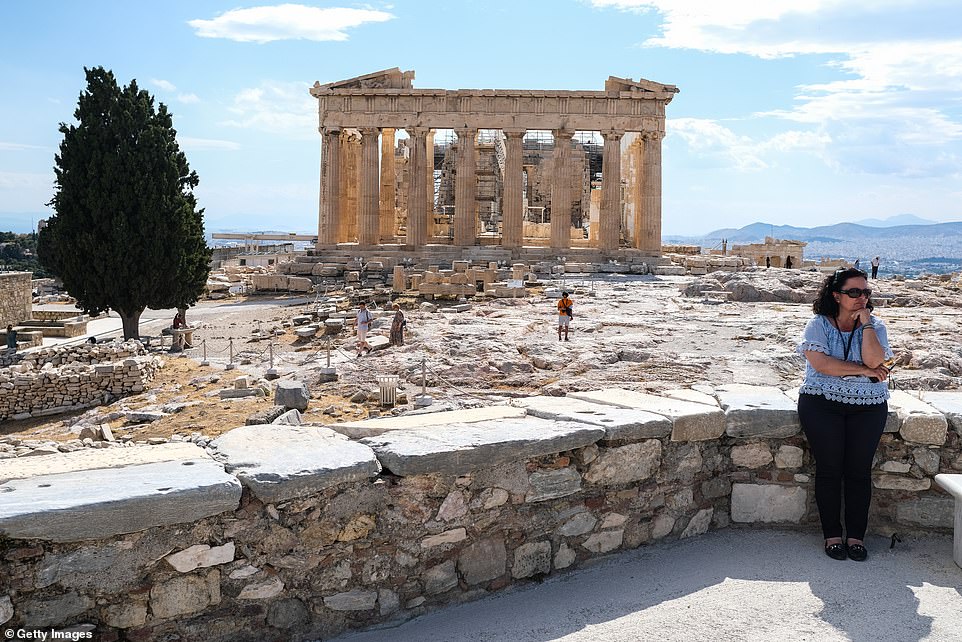 ATHENS: A woman sits on a wall while a handful of tourists hike around the Acropolis on Sunday, after Greece re-opened open-air archaeological sites with a view to resuming its tourist season next month 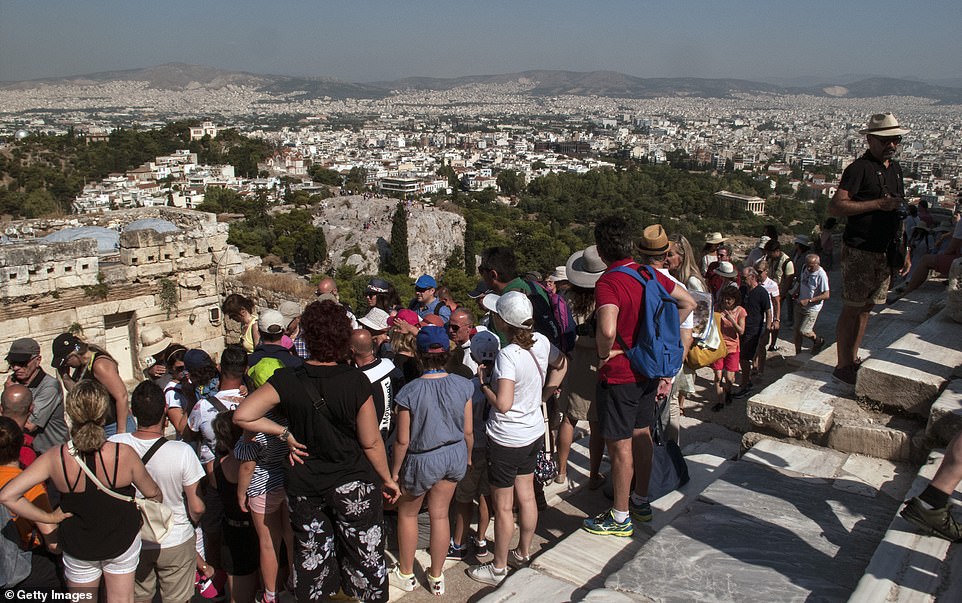 This picture in June 2019 shows a crowd of people at the Acropolis, overlooking the ancient ruins in Athens – where tourists will start returning in the coming weeks after the coronavirus lockdown

In Italy, which entered lockdown earlier than the rest of Europe, churches have opened again and worshippers can queue to enter St Peter’s Basilica in the Vatican.

However, St Peter’s Square outside it has been largely deserted except for a handful of visitors and nuns wearing masks – in contrast to the crowds who pack into the square when the Pope appears in public.

Venice’s canals have been so quiet in recent months that the water has turned clear, with jellyfish and even an octopus seen under the surface.

The gondolas have now resumed their traffic again, but only with limited numbers, and the usual crowds of tourists are yet to reappear.

Even Italians are still banned from travelling outside their region until June 3, although restrictions on travel within regions were lifted on May 18.

Any foreign visitors arriving in Italy are currently subject to a two-week quarantine, and at the moment are only allowed to enter in exceptional cases anyway.

Those restrictions will also be lifted on June 3, when European visitors will be allowed to enter without a quarantine.

Foreign minister Luigi di Maio appealed directly to Germans to ‘come and visit our beaches, our sea, our mountain villages, enjoy our cuisine’ in an interview with German newspaper Bild. 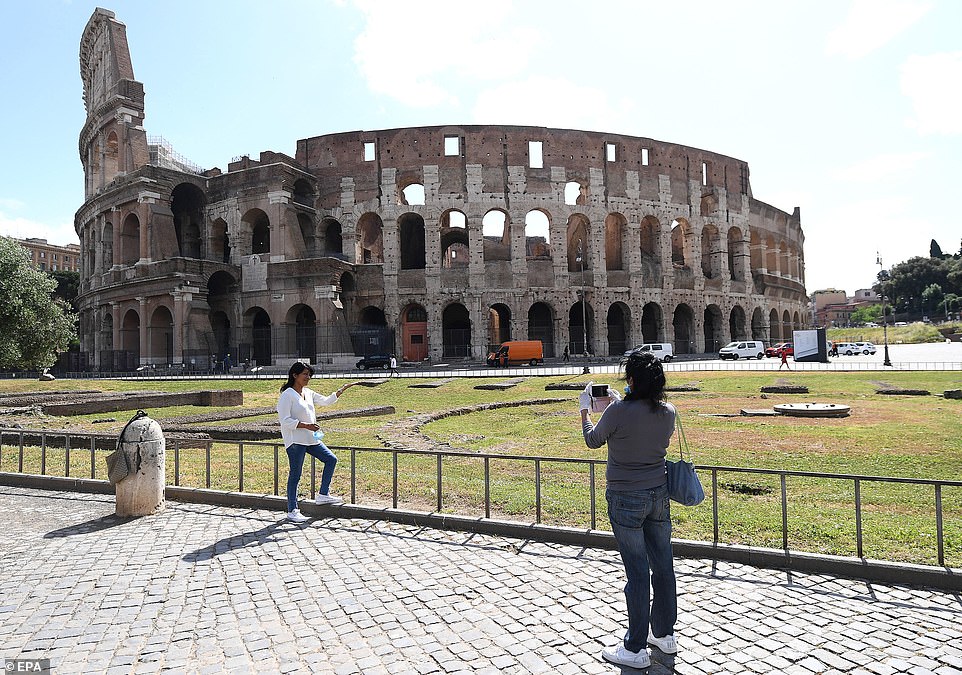 ROME: These two women have all the time they need to take pictures as they stand outside the 2,000-year-old Colosseum in Italy last week, which is often overflowing with tourists and people trying to sell them tours 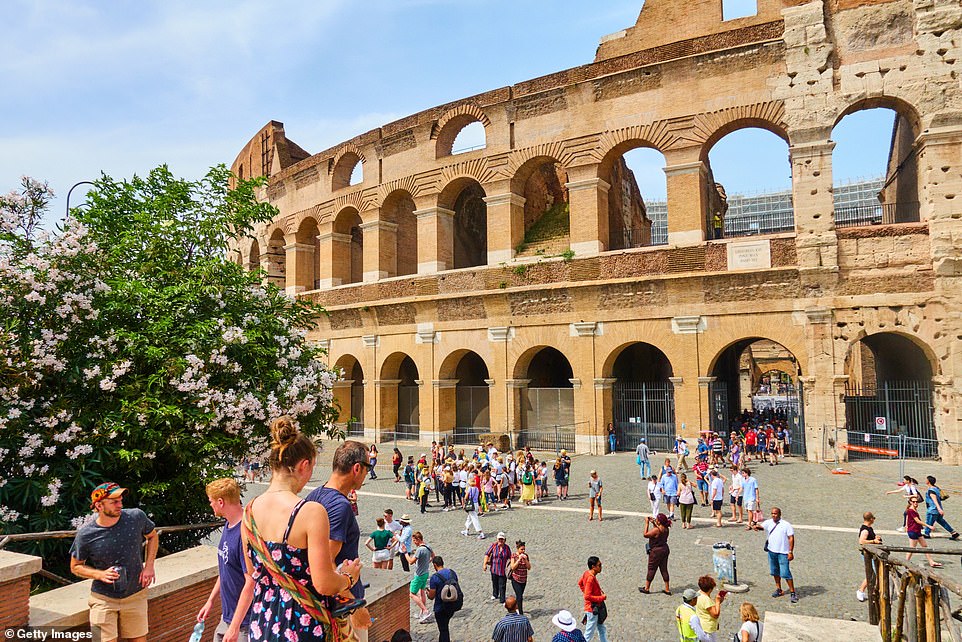 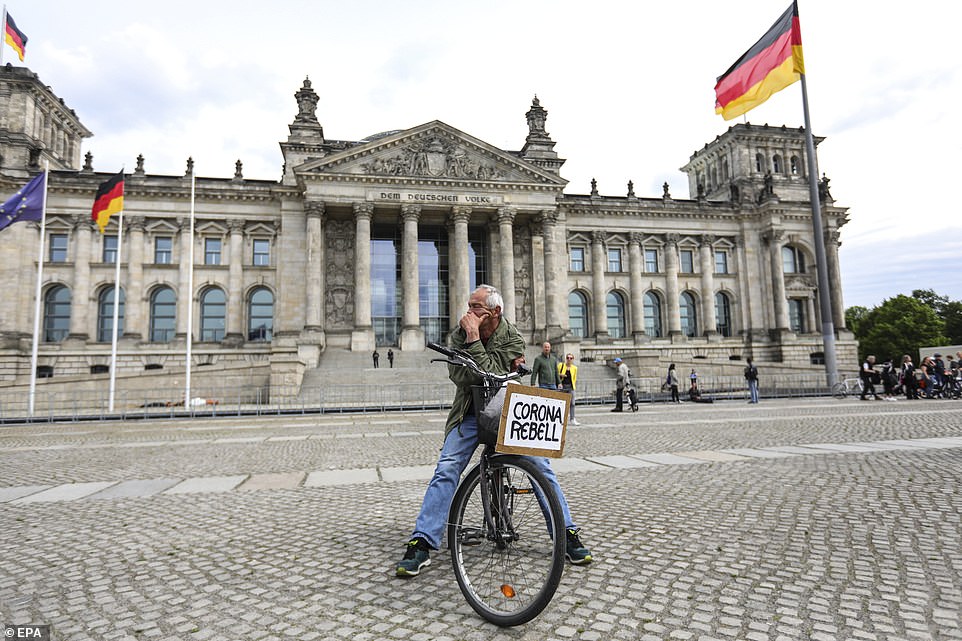 BERLIN: The square in front of the Reichstag building which houses the German parliament has been largely empty, seen here on Sunday – although there have been protests against the lockdown, seen in the corner of this photo 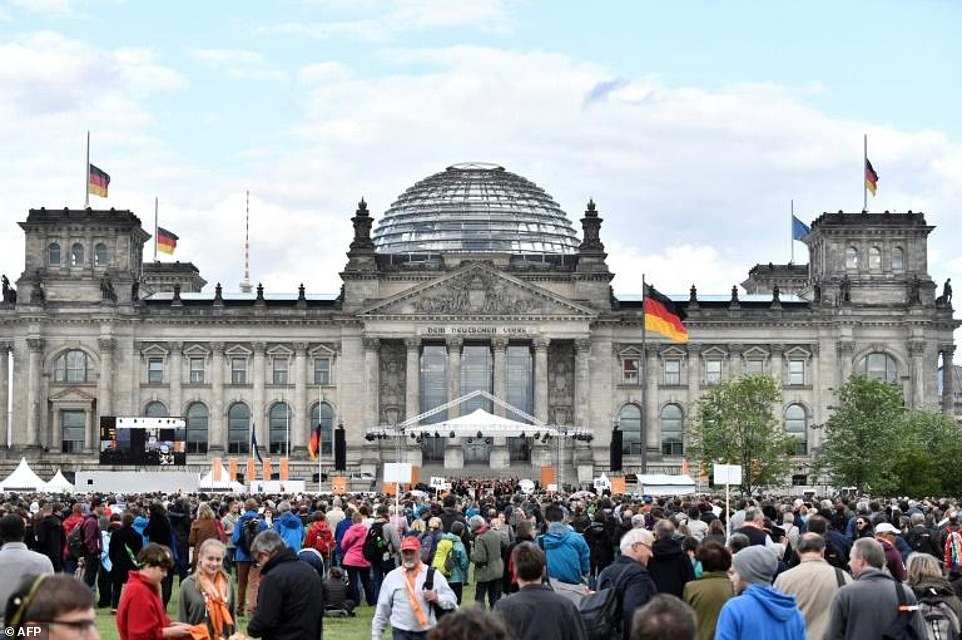 The Reichstag often sees crowds and long queues, as seen here in a file photo. The dome was built when the Reichstag was restored in the 1990s after German reunification

In Greece, where tourism accounts for around a fifth of the economy, ministers have announced plans to welcome tourists back from next month – but not initially Britons.

The government has said it plans to restore international flights to Greece’s islands from July 1 but will refuse entry to citizens from countries with high infection rates until July 15.

Germans, Cypriots and Israelis will be among those initially allowed to enter from mid-June as the Greek government draws up a list of 20-25 approved countries.

The country’s tourism minister said earlier this month that Britain was unlikely to be on that list, saying that Greek officials would wait for UK virus figures to improve.

Greek prime minister Kyriakos Mitsotakis has said Germans will be allowed to visit Greece from June 15 as the country reboots its tourists season.

He has also said that international flights to the northern city of Thessaloniki would resume on June 15, sooner than an initial planned date of July 1.

The Greek economy is still recovering from a decade-long debt crisis that left it on the brink of crashing out of the eurozone. 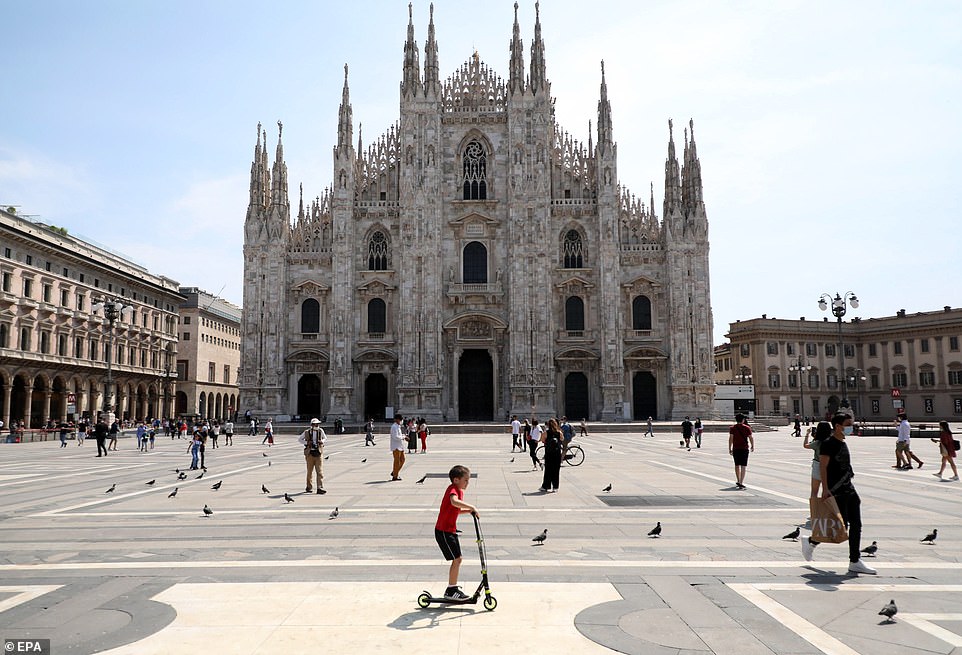 MILAN: Some people have started returning to the square in front of Milan’s Duomo cathedral, which was totally deserted when the lockdown was in full force, but the crowds are still smaller than usual 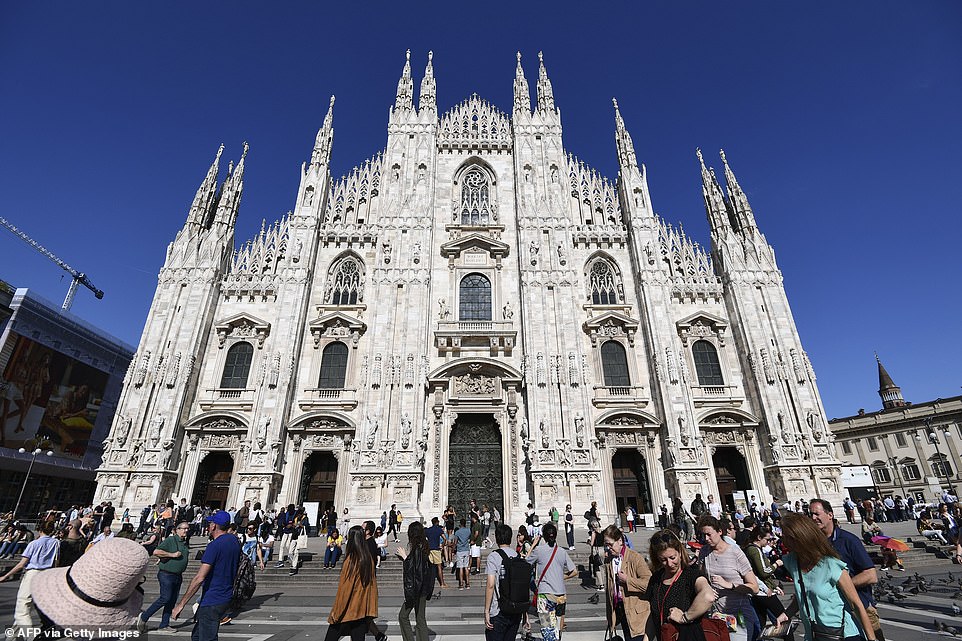 A more typical crowd outside the cathedral in May 2019, near the Vittorio Emanuele II shopping gallery in Milan which has similarly seen its usual crowds reduced to nothing during the pandemic 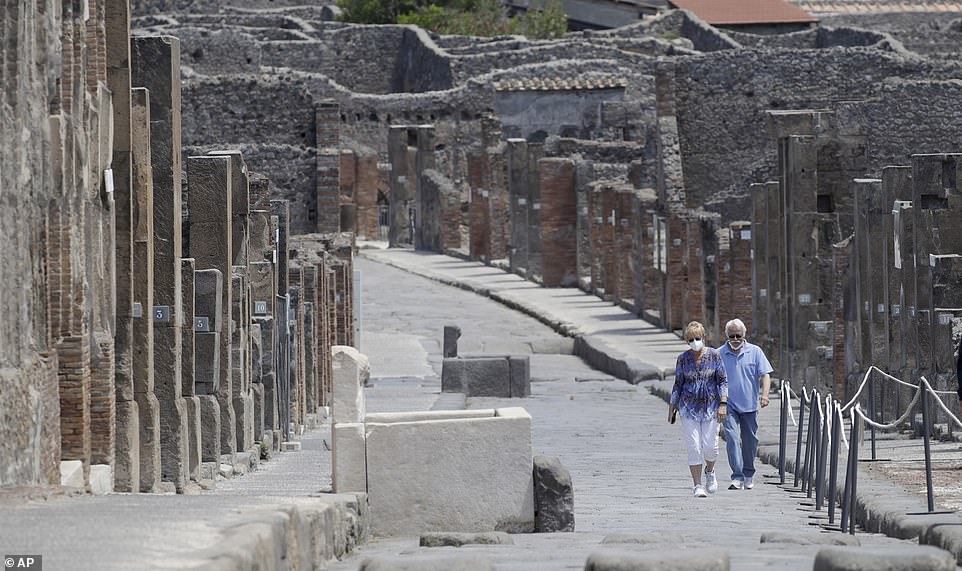 POMPEII: Colleen and Marvin Hewson from the United States visit the archaeological site of Pompeii yesterday, after a long wait when they were stranded in Italy during the lockdown 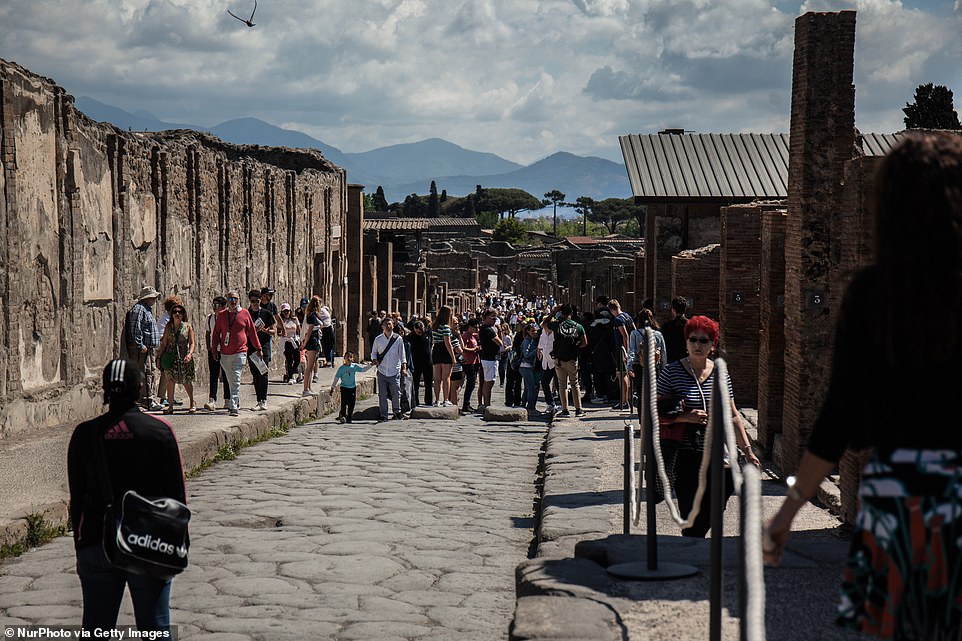 A much larger crowd of people visiting Pompeii on May 1 last year. Italy will start allowing international travel again from June 3 but many countries including Britain are still advising against foreign travel 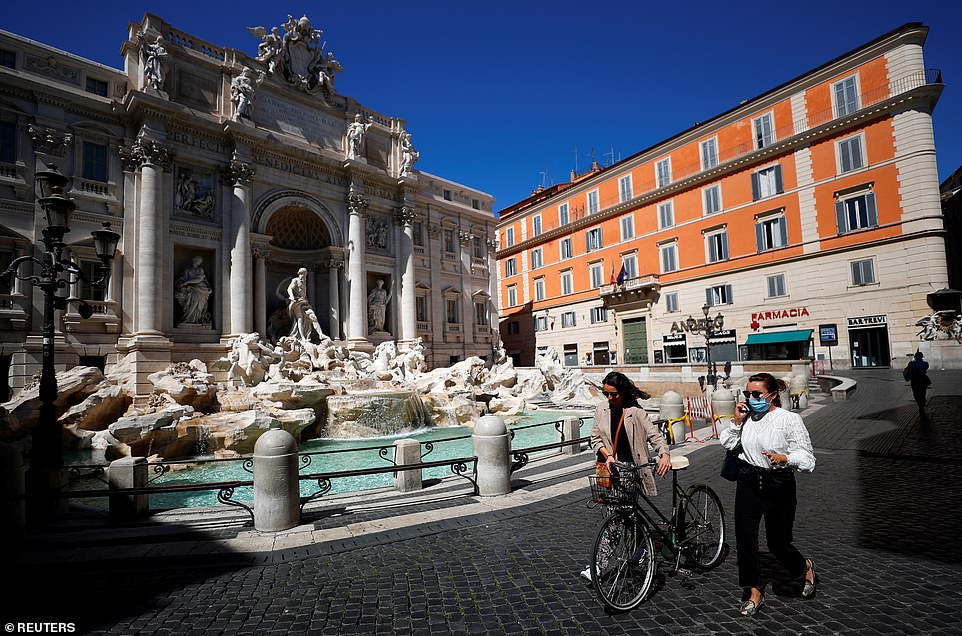 ROME: A handful of people walk in front of the Trevi Fountain, one of the city’s most famous landmarks which is often packed with tourists taking pictures 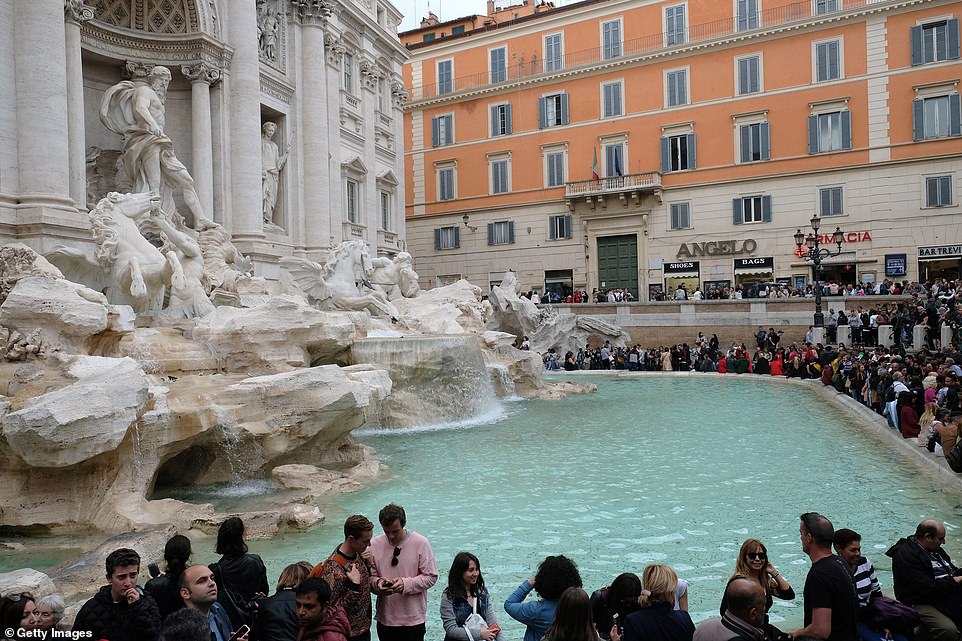 A large crowd of people in the same spot in May 2019. Even Italians are still banned from travelling outside their region until June 3, although restrictions on travel within regions were lifted on May 18

Spain will allow visitors to enter without a two-week quarantine from July 1, the government announced on Monday as it draws up its own plans to revive the tourism sector.

‘I am announcing to you that from the month of July, entry for foreign tourists into Spain will resume in secure conditions,’ prime minister Pedro Sanchez said.

The country’s tourism minister indicated that foreign nationals could reasonably consider booking a holiday in Spain in July.

In Britain, the Government is planning to impose a 14-day quarantine programme for anyone arriving in the UK from abroad, with an exception for those coming from Ireland.

But transport secretary Grant Shapps has floated the prospect of ‘air bridges’ with countries with low infection rates avoiding the restriction.

The UK Foreign Office currently advises against all international travel, saying that Britons abroad should return home unless they live there.

Patricia Yates, acting chief executive at Visit Britain, said 2020 has to be the ‘year of domestic tourism’ but there will be a serious challenge in convincing people it is safe to travel. 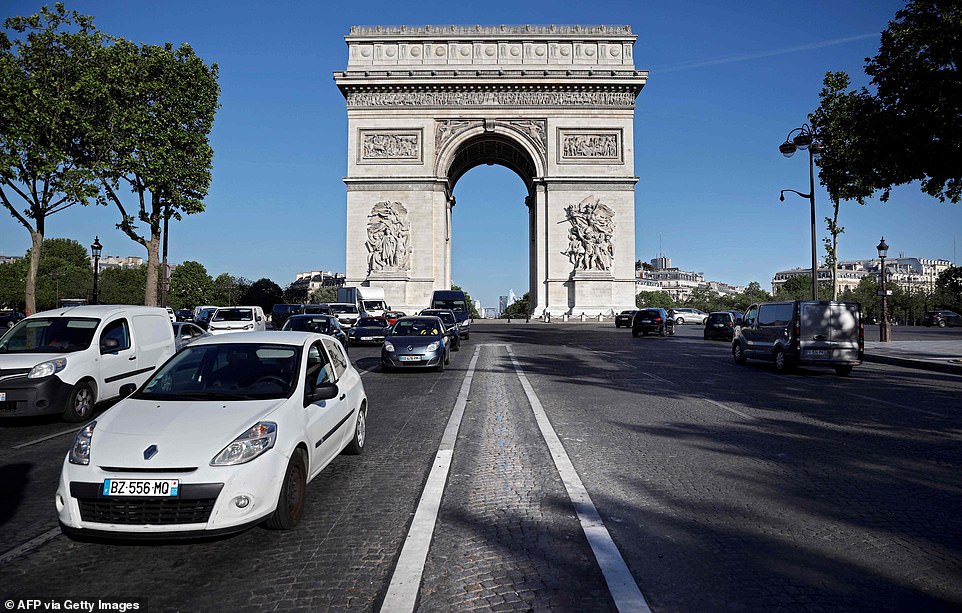 PARIS: Traffic is resuming on the Champs-Elysees with the Arc de Triomphe behind it, but tourists are still staying away from the landmark built by Napoleon in the early 19th century 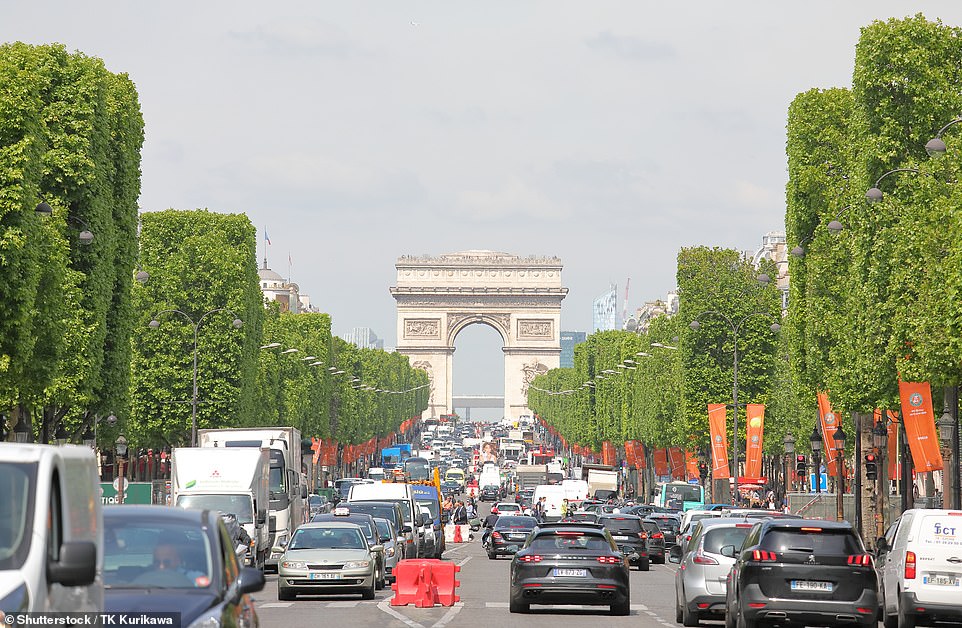 A busier seen on the Champs-Elysees looking towards the Arc de Triomphe in May 2019. France has lifted its strictest lockdown rules meaning people can now travel freely in their local area

Cyprus is also planning to encourage tourists back by covering all costs for anyone who tests positive for the coronavirus while on vacation there.

The Cypriot government says it will cover lodging, food, drink and medication for Covid-19 patients and their families. Patients will only have to pay for the taxi ride to the airport and the flight back home.

A 100-bed hospital will cater exclusively to foreign travellers who test positive, with around 112 intensive care units equipped with 200 respirators reserved for critically-ill patients.

International air travel to Cyprus begins on June 9, initially from 19 countries, with passengers required to undergo a Covid-19 test three days prior to departure.

That measure will be lifted on June 20 for 13 countries, including Germany, Finland, Israel, Greece and Norway, but not Britain.

The financial pledge came in a five-page letter sent out to governments, airlines and tour operators outlining strict health and hygiene protocols that the government is enacting to tempt visitors back.

The letter, signed by Cyprus’ foreign affairs, transport and tourism ministers, boasts that the country has one of the lowest coronavirus ratios per capita in Europe after having tested more than 10 per cent of its population.