Up to 100 revellers have been spotted outside a Sydney pub appearing to ignore strict social distancing rules.

The huge crowd queued outside the Greengate Hotel in Killara in the city’s North Shore around 7.45 on Wednesday night.

Pub-goers were lined up along the Pacific Highway, many standing shoulder to shoulder as they waited to get inside.

Speaking on 2GB Radio on Thursday morning, Ray Hadley slammed the owners for putting pubs at risk of shutting down.

‘I say the owners of the Greengate which is a good pub, you’ve badly let the team down this week,’ he said.

‘If you don’t follow the rules not only will the Greengate get shut down but every pub in the Sydney metropolitan area will get shut down as well.’

Nine News reporter Damian Ryan said the cameraman saw some guests socially distancing but the majority were ‘shoulder to shoulder’.

‘There was probably 80 to 100 people outside the pub, and it was very reminiscent of what we saw at the Golden Sheaf,’ Mr Ryan said.

‘The damage is done: if there hadn’t been a cameraman there, and they weren’t brought to account, it would’ve probably persisted for the evening.’

The Greengate Hotel has a list of rules for patrons to adhere to COVID-19 regulations.

The pub’s website says guests must keep 1.5 metres apart, and must remain seated at all times. 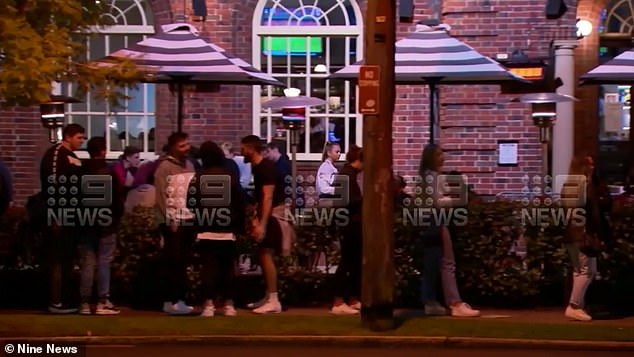 The hotel also has a COVID-19 marshall which is used to patrol the venue.

Similar scenes were spotted at Double Bay’s The Golden Sheaf earlier this month.

The popular bar was fined $5,500 after a photo went viral showing hundreds of patrons huddled together as they waited in the queue.

Liquor & Gaming NSW believed up to 250 customers failed to comply with social distancing rules in front of the popular bar.

NSW Police received multiple reports in regards to a large crowd outside The Golden Sheaf and confirmed officers were sent to disperse people waiting to gain entry.

Pictured: The Golden Sheaf in Double Bay has been fined $5,500 after hordes of university students were seen crammed together outside the pub earlier this month

A statement from Solotel Group CEO Justine Baker, who runs the hotel, said the venue understood and accepted the fine.

‘Wednesday night showed us that we need to pay more attention to our guests and the queues outside the venue as well.’

Mr Baker said the venue had employed more security and staff to assist with managing queues and introduced a bookings only policy from 8pm on Wednesdays.

‘We will continue to practice social distancing and COVID-Safe measures within the Golden Sheaf and all of our venues,’ the statement read.

Hordes of university students were seen crammed together on the street while they waited to enter the popular pub at about 9pm on a Wednesday.

The Golden Sheaf holds a night targeted at university students every Wednesday. 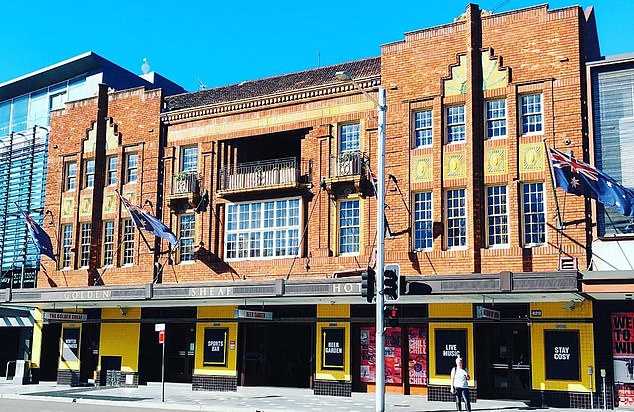