Macarthur TC star Al Hassan Toure made a defiant statement after scoring a goal in his side’s Australia Cup final win on Saturday night after a section of Sydney United fans marred the match by seeming to perform Nazi salutes and boo during the Welcome to Country before kickoff.

The 22-year-old then revealed the team were driven to win for their skipper Ulises Dávila, whose wife Lily died suddenly earlier this year.

Sydney United’s miracle run to the cup final has been the story of the competition this season, as they became the first National team to reach the big game.

Some followers of United, formerly known as Sydney Croatia, sang Za Dom Spremni (For Homeland – Ready) – a chant used by the far-right Ustase movement in the 1930s and 1940s at the game.

Images and videos circulated on social media also appeared to show fans carrying out fascist-style salutes during the match. 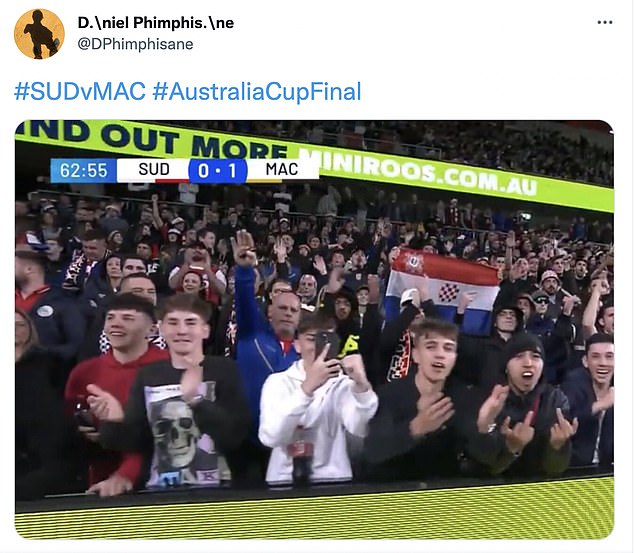 Sections of fans could be heard singing and allegedly booing during the national anthem and the traditional Welcome to Country ahead of kick-off against Macarthur.

So when Toure scored from a penalty in the 32nd minute, he gave the fans a piece of his mind by running up to the fence and cupping his hands around his ears in an ‘I can’t hear you’ gesture that showed them the abuse wasn’t getting to the team.

Some supporters responded by throwing rubbish at the forward and giving him the middle finger.

After Macarthur won 2-0, Toure was interviewed on the pitch while the team celebrated.

‘Our captain needed that today, with everything that’s gone on with his wife, I think this is more for him and his family,’ he said, while appearing close to tears.

‘He’s been going through a hard time and this is just for him.’

The A-League was sent into shock when Dávila’s wife Lily died in May, leaving him to look after their son, Uli Junior. 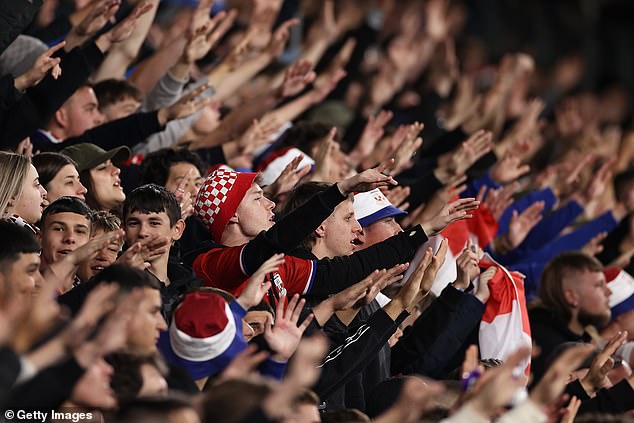 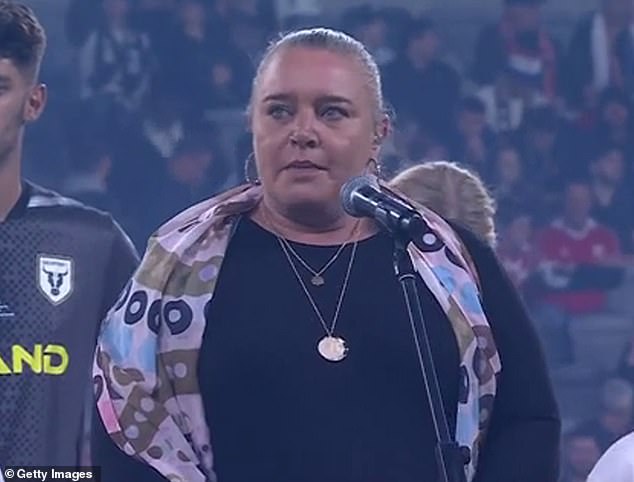 A former Chelsea star and Mexican international, Dávila had an outstanding game on Saturday night, winning the Mark Viduka Medal for a man-of-the match effort that went a long way to bringing Macarthur their first trophy since they made their A-League debut in 2020.

The disgraceful display from sections of the Sydney United crowd drew widespread condemnation after the match.

‘These vile symbols and salutes have no place in modern Australian society,’ NSW Jewish Board of Deputies chief executive Darren Bark said.

‘They represent the ultimate manifestation of evil – an evil which led to the murder of millions of innocent civilians during WWII, including six million Jews and thousands of Australian Diggers who lost their lives fighting against the Nazis during WWII. 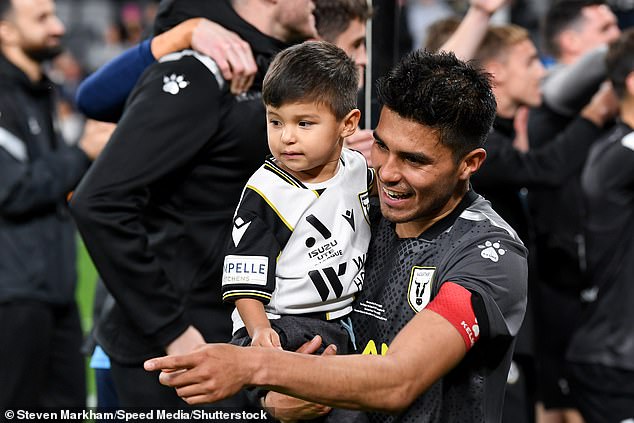 Macarthur captain Ulises Dávila (pictured with son Uli Junior after the win) picked up the man of the match award. Toure said the team wanted to win for their skipper after he lost his wife in tragic circumstances earlier this year 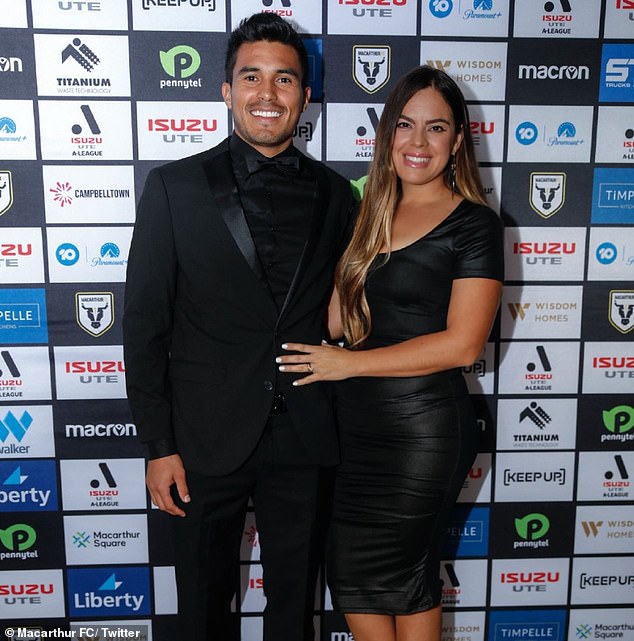 Bark called on Football Australia to take ‘strong action’ against the perpetrators.

One banner unveiled at CommBank Stadium bore a striking resemblance to the flag of Nazi Germany.

Largely red, it contained a white circle in the middle, with ‘EP’ – an acronym for the club’s Edensor Park home – written in the circle in black typeface.

A section of United fans also chanted and booed during the welcome to country performed by Erin Wilkins, as well as the national anthem.

Football Australia chief executive James Johnson telephoned Wilkins during the final to apologise on behalf of his organisation, which insisted the behaviour was restricted to a small section of supporters.

‘Football Australia acknowledges that a very small minority of attendees engaged in behaviour that is not consistent with Football Australia’s values and wider community expectations,’ the organisation said in a statement.