Saturday morning, really rather early, and I am standing in the middle of a field with Joe. I am here on a date. Only this is a date like no other I have ever been on.

For I’m not just with Joe — I’m also with Clover the border collie and a flock of sheep.

I’ve done dinner. I’ve done coffees. I’ve done art exhibitions and visits to standing stones. I’ve done opera and theatre and museum trips, and even lunch at a beach bar in Greece. But this is the first time I’ve ever done a date at 7am in the company of farm animals.

And I must say I’m enjoying it. Joe and I have bonded over dogs. I have my collie with me, too — Mollie is wriggling around like an eel on a string as she is desperate to join in. ‘Clover has been the best dog at rounding up sheep that I’ve ever had,’ says Joe, shouting and whistling while Clover whirls around snapping and crouching low until she eventually herds the sheep into a pen.

Lucy Cavendish, 54, shared her experience of bonding over her passion for the countryside with matches on dating website Muddy Matches. Pictured: Lucy with a model

‘Good dog,’ says Joe, stroking her head. Clover looks up lovingly at him. I am not surprised: Joe is a good-looking man. He’s tall and tousle-haired and, in his Barbour and moleskin trousers, checked shirt and sturdy boots, has ‘country’ written all over him. In fact, that’s a bit of a misconception. Joe is a computer programmer from Stroud, Gloucestershire, who has a side hustle in training dogs to take part in dog agility classes.

But that’s by the by. Forty-two-year-old Joe loves the countryside with a passion, as do I, and we have met online through a dating website called Muddy Matches, which is designed specially for folk like us.

At 54, and a divorced mother of four, I am significantly older than Joe, but his approaches were so courteous that I agreed to meet.

His first chat up line was ‘Which is your favourite country game fair?’ which led to a quickfire text chat about ferret races and hawk handlers.

But this is the point of Muddy Matches. Rather than the metropolitan hook-up culture of something like, say, the dating app Tinder or sleek urban professionals app Hinge, Muddy Matches is full of rugged types who fix tractors and keep chickens.

Apparently, membership has rocketed since the pandemic began. Co-founder Lucy Grand, 42, tells me it’s because people reconnected with the outdoors over lockdown — then started to move out of the towns and cities.

The Jeremy Clarkson factor may have something to do with it, too. His TV series Clarkson’s Farm, complete with cute lambs, homemade honey and a thriving farm shop, made many a midlife woman hanker after a man in green wellies with whom to watch the sun go down over the Lower Field.

As the Covid exiles head into the countryside, bagging a farmer suddenly seems like a trend. 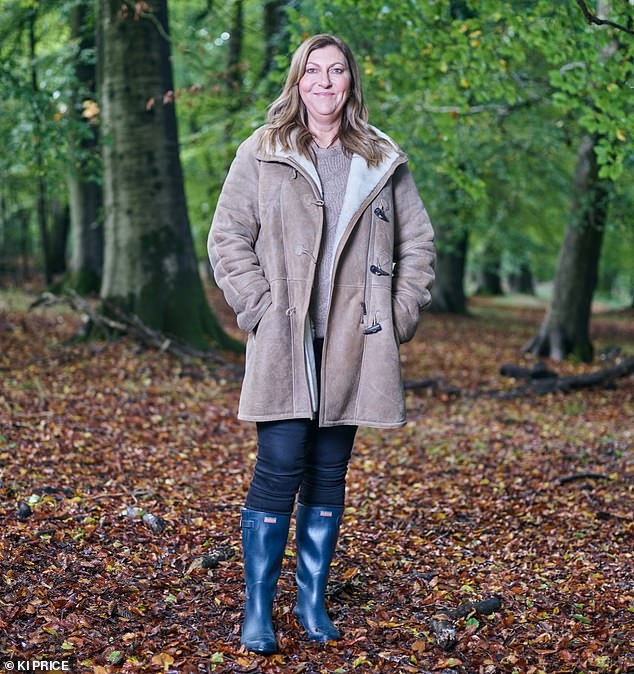 Muddy Matches had a humble start. In the pub one night, Lucy and her sister Emma, who grew up on a farm on the Nottinghamshire-Bedfordshire border, wondered how on earth to meet someone given that they already knew everyone in their village.

‘We started it up just as an idea, something we’d do on the side,’ says Lucy, who now works full-time on the site. ‘The concept is that it’s for anyone who loves the countryside and is not averse to mud. There are all sorts of people on it. Some are country folk who like country pursuits. Some are farmers, and we do suggest people understand what that means. Farmers work long, hard hours and anyone who dates a farmer has to be prepared to become a harvest widow.

‘Then there are those who just like to go for a walk and enjoy hanging out in nature.’

The website is certainly busy. I am on it for only a few hours before men start ‘liking’ me.

This is the first time I’ve ever gone on a date at 7am – and in the company of farm animals!

While they might not all be precisely what I am looking for, they are, to a man, polite and kind and don’t send sex texts or dodgy pictures (trust me, on other dating sites this is not uncommon).

They ask me questions about whether or not I like sailing (‘kind of’) and yomping up hills (‘yes’) and one even asks if I own sheep (‘no’).

While some of them may be a bit too country for me — I don’t like blood sports and can’t ever see myself taking up fly fishing — many seem genuine and decent. They are who they say they are, which is already a win in the murky world of online dating.

Is this because rural folk are inherently more honest than their city cousins when looking for love? Possibly. 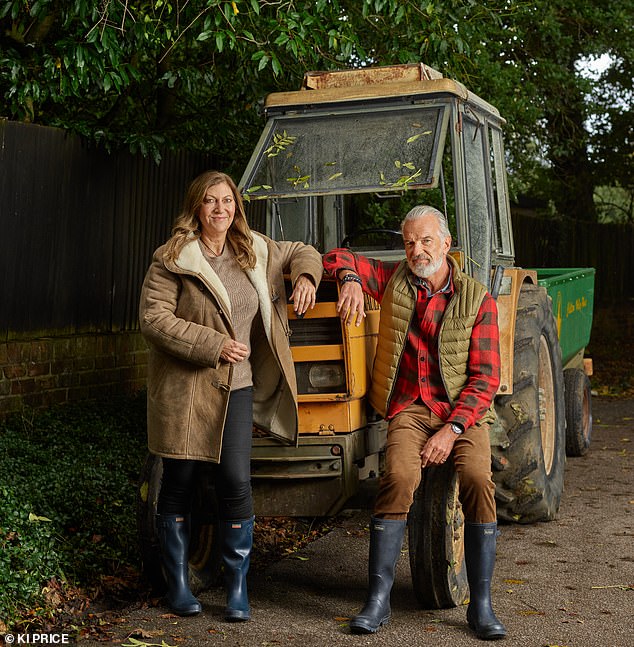 Lucy said the last time she went on a date in London, she was astonished at how primped and preened everyone else looked

Members, stresses Lucy, ‘are generally more comfortable doing long country walks than having a night at the opera,’ which in itself — no disrespect to opera-lovers — implies a certain wholesomeness.

Plus, it’s easier to be a cad in the city, where you can suddenly drop or ‘ghost’ a date in the almost certain knowledge that you’ll never bump into them again. But that’s not necessarily so in the gossipy shires.

I’ve lived for more than two decades in the Oxfordshire countryside and am nowadays definitely more wellies than high heels.

The last time I went on a date in London, I realised just how fish-out-of-water I am. As I sat in a bar in my go-to outfit of casual jeans and boots, I looked around and was astonished at how primped and preened everyone else looked.

I realised then that I’d far rather get muddy on a long country walk than sip a dirty martini in a deafeningly crowded room. So, yes, I do want a man who knows his cobnuts from his chestnuts (and which trees they grow on).

It’s easier to ‘ghost’ a date in the city knowing you won’t bump into them again. Not so in the gossipy sticks

A man who’ll happily listen to me bang on for hours about how healing I find nature to be, and who’s a willing companion on my annual outing to the local tractor competition, where I’ve been known to watch tractors ploughing up and down for hours on end.

Heck, despite Lucy’s warning about farmers, I wouldn’t mind if he was sitting up on the tractor himself.

But, of course, Muddy Matches or not, dating is a difficult business. It’s all very well having a nice choice of potential date, but the chemistry has to work, too.

Joe tells me that on other dating websites he’s spent a lot of time and energy ‘talking’ to potential dates — and yet no one ever seems to want to meet up. 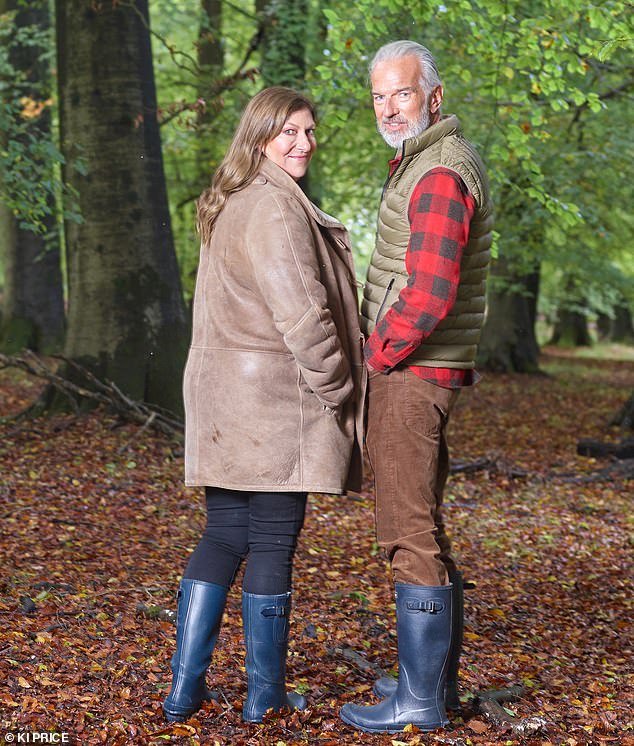 Lucy said setting her distance on Muddy Matches to 20 miles didn’t stop men messaging her from a different country. Pictured: Lucy and a model

‘We’d swap messages for ages and I’d think we were getting close, but when I’d suggest a date, nothing more would happen.’ He tells me this is why he has widened the age group he is interested in — hence finding me.

‘The problem is that it’s hard dating people round where I live,’ he says. ‘I know pretty much everyone in my village and there’s no one for me to go out with.’

He says he has had some relationships, but hasn’t yet managed to meet The One, despite trying very hard. ‘I need to broaden my horizons,’ he says.I know the feeling. I, too, know every single person in my village, and it gets tiring being the only single woman for miles around.

And here lies the real drawback about rural dating as opposed to hooking up in the city. The countryside is big.

I set my distance on Muddy Matches to 20 miles, but that doesn’t stop men messaging me from, literally, a different country — Wales or Ireland — which, no matter how lovely, immediately rules them out as feasible relationship material.

Lucy says that many clients on Muddy Matches are happy to travel, but there’s only so much zooming around the UK I can do.

My next date, Stan, is a case in point. He’s closer to my age (Joe and I agree the age gap is too much) and we share very similar interests, but he lives absolutely miles away, near Chester.

We agree to go kayaking together on the Thames, but, just before we are about to meet, the heavens open. Stan texts me suggesting that we meet for a coffee in his camper van instead. 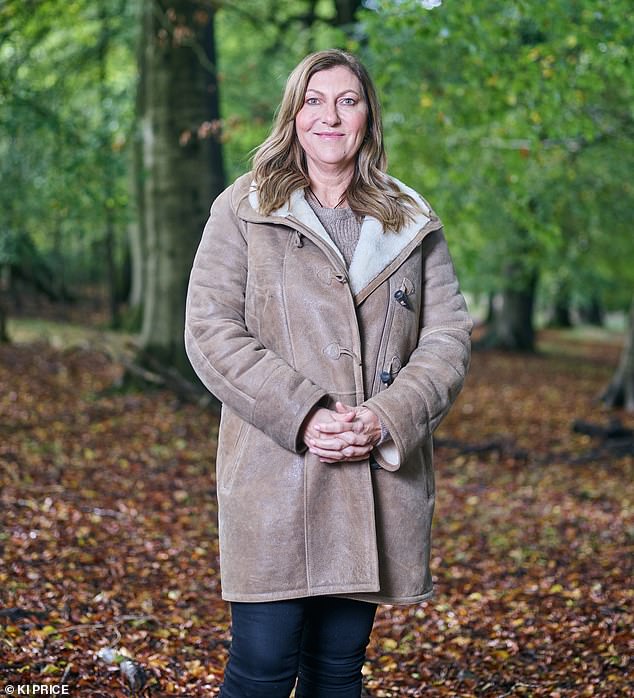 Usually, I’d decline on grounds of safety, but somehow the idea of a camper van feels reassuring, so I set off towards the river bank where he has parked up.

As I get out of my car, two huge huskies run towards me followed by a small neat man with a weather-beaten face.

I know pretty early on that Stan is not for me. He’s utterly lovely, but there’s no chemistry — and that is key for me.

Also, as much as I love dogs, it’s quite difficult to have a conversation in a small van with huge wolf-like beasts lying around.

I think Stan feels the same way about me.

We have a lovely coffee and a slice of homemade cake that Stan bought at his local farm shop, and, after half an hour, I say I must be going and Stan says it’s fine as he has to leave, too.

As he drives off, I give him a cheery wave. He waves back and that’s the end of it.

Fun as it’s been, I think I’m going to give online dating a rest for a while and go back to marching up hills on my own.

That doesn’t mean I’ve given up on my hope of a muddy match altogether. Instead, I’m going to take a more traditional tack and try meeting a man In Real Life!

Even now, I’m planning my next batch of raspberry jam for entry into the annual social whirl that is the village show.

Who knows who I’ll lock eyes with over the prize veg? He might even have a tractor.