A look at attacks where vehicles have been used as weapons

STOCKHOLM (AP) – New York Gov. Andrew Cuomo says a man in a rented pickup who mowed down pedestrians and bicyclists along a bike path near the World Trade Center memorial Tuesday was a “lone wolf.” The attack killed at least eight and injured 11 others. Police shot the 29-year-old driver and took him into custody after he jumped out of the truck with what turned out to be a fake gun in each hand. It’s the latest in a string of incidents where drivers have used their vehicles as weapons. Some were orchestrated by extremist groups, others by unstable individuals with unclear motives. Radical groups have urged supporters to use any weapons at hand, including cars, a tactic that presents a major challenge for security forces around the world. Here’s a look at some other attacks:

Emergency personnel carry a man into an ambulance after a motorist drove onto a busy bicycle path near the World Trade Center memorial and struck several people Tuesday, Oct. 31, 2017, in New York. (AP Photo/Andres Kudacki)

A rented van veered into Barcelona’s crowded Las Ramblas promenade, swerving along the walkway and killing 13 people. Armed with an ax, knives and false explosives belts, attackers then drove a second vehicle to the boardwalk in the resort town of Cambrils early the next day, fatally injuring one person. Five of those attackers were shot to death. Authorities said a cell of at least nine extremists plotted to combine vehicles and explosives in a direct hit on tourists. Islamic State claimed the group as its own.

A car slammed into a crowd protesting a white nationalist rally in Charlottesville, Virginia, killing 32-year-old legal assistant Heather Heyer. The driver of the car, James Alex Fields Jr., described as an admirer of Adolf Hitler and Nazi Germany, was photographed with white nationalist demonstrators before the deadly crash. Fields is charged with murder and other offenses. Two Virginia state troopers also died in the crash of their helicopter, which was monitoring the rally.

A van attack on a crowd of Muslim worshippers near two north London mosques killed a 51-year-old Bangladeshi immigrant and injured nine other people. The worshippers were spilling out of the mosques following Ramadan prayers. British authorities charged Darren Osborne, an unemployed man from Wales, with murder and attempted murder. Police characterized the incident as a terrorist attack directed at Muslims.

A man drove a stolen beer truck into a crowd of afternoon shoppers outside the upmarket Ahlens store in Stockholm, killing four and injuring 15 others. The victims of the attack included an 11-year-old Swedish schoolgirl, a 31-year-old Belgian woman, a 69-year-old Swedish woman and a 41-year-old Briton whom the British government identified as Chris Bevington, an executive at Swedish music-streaming service Spotify. A Uzbek man, Rakhmat Akilov, was later arrested and pleaded guilty to a terrorist crime for ramming the truck into the crowd, according to his lawyer.

A man identified by police as Khalid Masood ran his rented SUV into pedestrians on London’s Westminster Bridge. Three people were killed on the bridge; a fourth person, a Romanian woman who was knocked into the Thames, died Thursday. Masood was eventually shot and killed by police, but not before stabbing a police officer to death on the grounds of Parliament. Police say Masood was inspired by extremist ideology, but that there’s no evidence he had direct links to the Islamic State group or al-Qaida.

A man with a history of mental health and drug abuse issues drove into a street crowded with pedestrians in Melbourne, Australia’s second-largest city, killing at least four people, including a child, and injuring around 15 others. The 26-year-old man was arrested, and police said the incident had no links to terrorism.

A Palestinian truck driver rammed his vehicle into a crowd of Israeli soldiers at a popular Jerusalem tourist spot, killing four people and wounding 17 in the deadliest single attack of more than a year of Israeli-Palestinian violence. It was the latest in a string of stabbings, shootings and vehicle ramming attacks in a wave of violence that erupted in the fall of 2015.

A young Tunisian rammed a truck into a crowded Berlin Christmas market, killing 12 and injuring dozens in an attack claimed by the Islamic State group. It was the first mass casualty attack by Islamic extremists carried out on German soil. Attacker Anis Amri, who had been denied asylum in Germany, was later killed by police in Italy after an international manhunt.

Eighteen-year-old Somali-born Abdul Razak Ali Artan drove a car into a crowd of students at Ohio State University. Artan then attacked bystanders with a knife before he was shot and killed by OSU police officer Alan Horujko. Thirteen people were injured in the attack.

A Tunisian residing in France plowed a refrigerator truck through a crowd celebrating Bastille Day on the Mediterranean beachfront in Nice, killing 86. Attacker Mohamed Lahouaiej Bouhlel, who claimed allegiance to the Islamic State group, was killed by police. Cities around the world beefed up measures to prevent vehicle attacks in response.

A motorist injured 13 pedestrians in the French city of Dijon; a day later, a man ran over pedestrians at a Christmas market in Nantes in western France, killing one and injuring nine. Both suspects, who survived, had histories of mental illness.

A 25-year-old man drove his car into to Canadian Air Force members near Montreal, killing one and injuring another. Authorities said the driver was a convert to Islam and had been flagged for jihadist ambitions. He was later shot dead by police.

Two men attempted to crash a blazing Jeep loaded with explosives into Glasgow Airport in Scotland. The car’s path was blocked and the explosives failed to detonate. 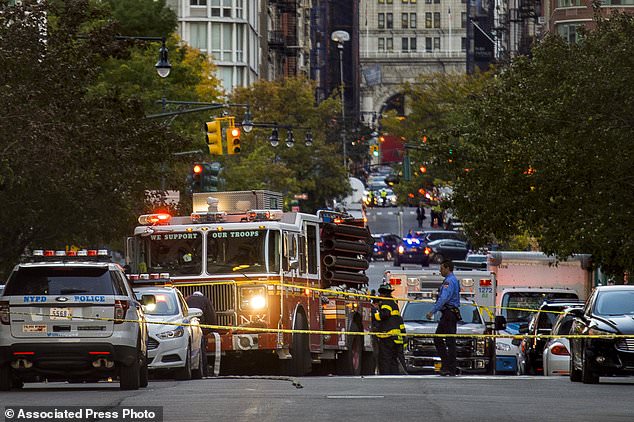 Firemen work in the scene after a motorist drove onto a busy bicycle path near the World Trade Center memorial and struck several people Tuesday, Oct. 31, 2017, in New York. (AP Photo/Andres Kudacki) 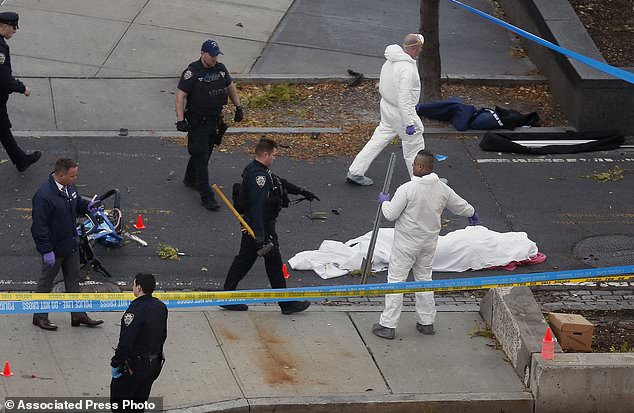 Authorities investigate the scene near a covered body on a bike path after a motorist drove onto the path near the World Trade Center memorial, striking and killing several people, Tuesday, Oct. 31, 2017, in New York. (AP Photo/Bebeto Matthews)