A look back at Betty White’s three husbands

A look back at Betty White’s three husbands: The wartime romance, the talent agent who wanted her out of showbiz and the love her life she lost to cancer before her Golden Girls fame

For Betty White, who died on New Year’s Eve less than three weeks before her 100th birthday, third time was the charm in the marriage department.

After a wartime romance that went sour in peace, there was the talent agent who wanted her to leave the business and so fell by the wayside himself.

Ultimately she found the ‘love of my life’ in game show host Allen Ludden with whom she had nearly two decades of happy marriage until his death of stomach cancer in 1981 – just four years before she began starring on The Golden Girls.

A full life: For Betty White, who died on New Year’s Eve less than three weeks before her 100th birthday, third time was the charm in the marriage department 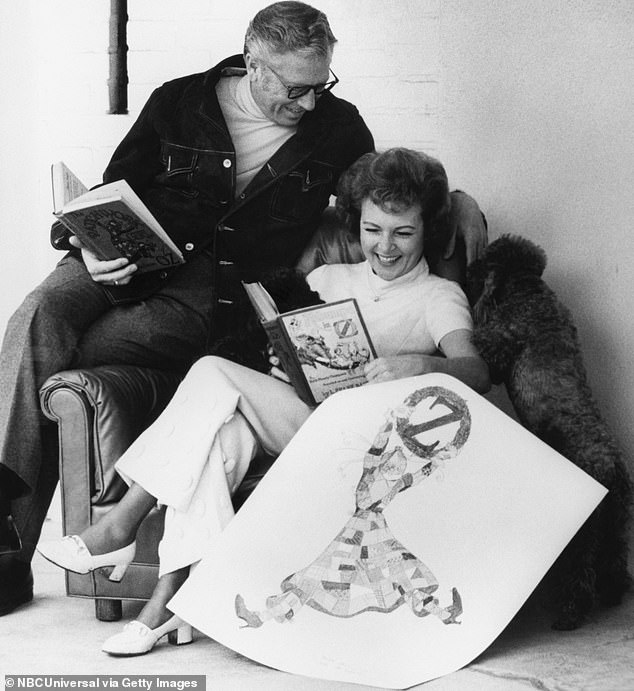 Throwback to 1959: Ultimately she found the ‘love of my life’ in game show host Allen Ludden (left) with whom she had nearly two decades of happy marriage

Betty never married again after losing Allen, telling Anderson Cooper in an interview a decade before her death: ‘If you’ve had the best who needs the rest?’

Her first marriage to chicken farmer Dick Barker lasted less than a year at the end of the Second World War, which had brought them together.

When the United States entered the conflict Dick was an army pilot and Betty signed up with the American Women’s Voluntary Services.

Betty, who had already begun her TV career in 1939, was introduced to Dick at a dance according to her biographer Paula Bernstein.

They quickly became engaged and then he was shipped off abroad, carrying on a romance with her in correspondence before the Allies won.

Dick and Betty married after he was back in America in 1945 – but she managed only four months of life on his Ohio chicken farm before getting fed up.

She told Closer she entered the ‘nightmare’ marriage ‘because we wanted to sleep together’ and vamped that ‘it lasted six months and we were in bed for six months!’

Two years after the beginning and end of her first marriage she tied the knot with talent agent Lane Allen who after two years decided she should leave the business.

‘We had a couple of very good years. But he wanted me to stop working. He didn’t want me to be in show business,’ she told Newsweek a few years ago.