A million illegal immigrants will not be removed from UK

After years of denial across government, a senior official finally acknowledged that huge numbers of foreigners are living here ‘under the radar’.

David Wood, who was head of immigration enforcement until 2015, told MPs few of the illegals were ever likely to be sent home. They include visa overstayers, criminals who have escaped deportation, failed asylum seekers and those who have sneaked into the UK.

More than a million illegal immigrants are unlikely to ever be removed from Britain, MPs have heard (illegal migrants try to board a truck in the French port of Calais)

Campaigners point out that the undocumented migrants are putting the nation’s schools and hospitals under strain and may not be paying taxes.

Giving evidence to the Commons home affairs committee, Mr Wood said: ‘There are probably over a million foreigners here illegally at the moment. There’s a large number, so no one could ever remove them really.’

He also told MPs that Brexit could result in a ‘whole group of potential illegal immigrants that there wasn’t before’. EU nationals overstaying visas would be targeted as easy to remove while ‘more harm-based cases are left’.

Official statisticians say it is impossible to give an accurate number for people living here unlawfully. The last Home Office estimate – from as long ago as 2001 – was 430,000.

He added: ‘It does raise questions about the ability of the department to make sure we have a watertight immigration system in place to deal with people who are not supposed to be here, especially post-Brexit.’ 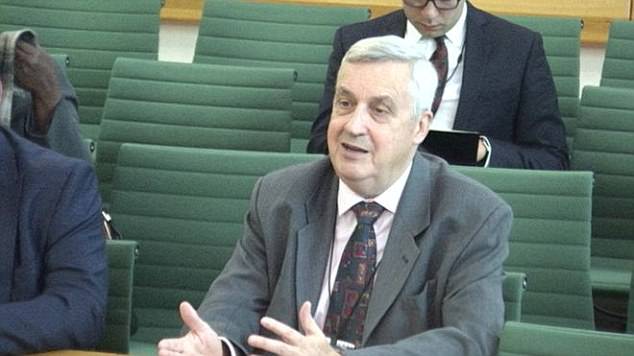 David Wood (pictured), an ex-director general of immigration enforcement, told MPs there are ‘enormous difficulties’ in removing overseas nationals who are in the country unlawfully

Christopher Chope, the Conservative committee member who drew Mr Wood into the admission, said: ‘It is mind-boggling that there are so many people here who should not be here and we don’t know what to do in response.

‘The figures illustrate the paucity of any removals whether compulsory or voluntary and it suggests we do not have any controls over the people who are here.’

More than three million EU residents live in the UK and ministers have insisted they want them to stay post-Brexit.

Individuals in the UK for more than five years will be required to apply for ‘settled status’ while others who have arrived more recently will have time to ‘regularise’ their standing.

Mr Wood said EU nationals overstaying visas once a new system comes into force could become ‘quite easy candidates for removal’ due to pressure on resources.

‘If they overstay that, they go into this illegal community,’ he said. ‘That is a bit of a worry going forward, because with pressure on resources they will be quite easy candidates for removal. With pressure on enforcement teams and removal numbers, there might be an over-concentration on simple-to-remove Europeans and more harm-based cases are left.’

Ministers have introduced measures to create a ‘hostile environment’ for those with no right to be here. Illegals are barred from renting homes or opening bank accounts and driving licences can be refused or revoked. An Immigration Act introduced last year made it easier to prosecute an employer who knows, or ‘reasonably suspects’, that their employee should not be in Britain.

But the Mail has regularly published images showing gangs of illegal immigrants being caught in lorries which have reached the UK from across the Channel. Last year, it was revealed how the number of illegal immigrants discovered sneaking into Britain hidden in trucks, cars and trains has almost trebled in a year.

Lord Green of Deddington, chairman of MigrationWatch, said: ‘For some years we have been pointing to the likely scale of illegal migration to the UK.

‘This now seems to be confirmed by a former official who was responsible for these matters at the Home Office. It is an astonishing number of people coming below the radar to Britain. All of them, in practice, have access to the NHS and education for their children.

David Blunkett has admitted he was ‘culpable’ for a migration regime that saw a huge EU influx.

The Labour ex-home secretary said he used the ‘cover’ of a statistician’s analysis that 13,000 a year would come after Poland and nine other countries joined the EU in 2004. The huge underestimate was based on the false assumption Germany would also open its doors.

Mr Blunkett told a BBC2 documentary: ‘We were quite happy to ride with the public understanding that this wasn’t going to be a major influx and of course it was.’

‘There is no way the Government can remove so many people but they are right to make the environment much more difficult for people who have no right to be here.’

Despite a backlog of nearly 27,000 failed asylum seekers who were deemed ‘subject to removal action’, the Home Office deported fewer than 3,500 in 2016.

This is a fall of two thirds since 2010, when the Tories came to power.

The Home Affairs Committee is examining the capacity of the immigration system to cope with the challenges posed by Brexit, including the task of documenting the three million EU citizens.

A Home Office spokesman said: ‘It is harder than ever before for those with no right to be here to remain in the UK. Whether it is working, renting a property, opening a bank account or driving a car, we can now take tougher action on those who flout the law.

‘There are no official estimates of the number of illegal immigrants living in the UK, as illegal migration is a clandestine activity and we do not recognise the one million figure suggested by David Wood.

‘We expect those with no basis of stay to leave voluntarily and where they do not we will enforce their removal. This includes foreign criminals of whom we returned more than 6,000 last year.’