A mom-of-six has revealed she copes with the chaos that comes along with having a huge family by wearing earplugs to drown out her kids – and only allocating them a single cup and bowl each to save time when washing the dishes.

To cope with all the children, the stay-at-home mom limits screen time to just one hour a week, and gives each child a chore they have to do for an entire year.

She also gives them only one cup and one plate to limit the amount of dishes and save cupboard space, and one color-coded robe to keep laundry to a minimum and enforces other rules to help calm the storm.

Sharon Johnson, 36, from Utah, revealed she copes with the ‘sensory overload’ from her huge family by wearing earplugs and enforcing ‘strict’ rules 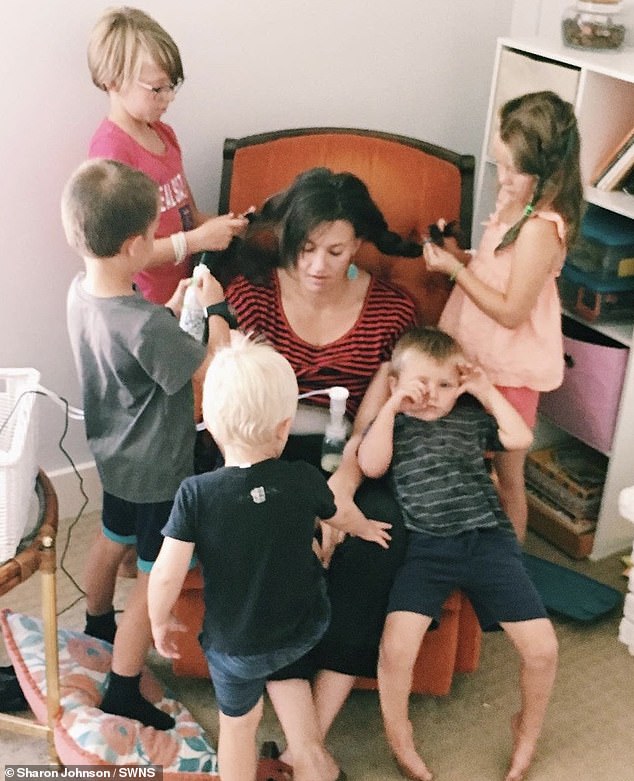 She has mastered the ways to make her life even just a little easier with children, Lusilia, 12, Sophia, 10, Pratt, nine, Coop, seven, Philp, six, and Nadine, three 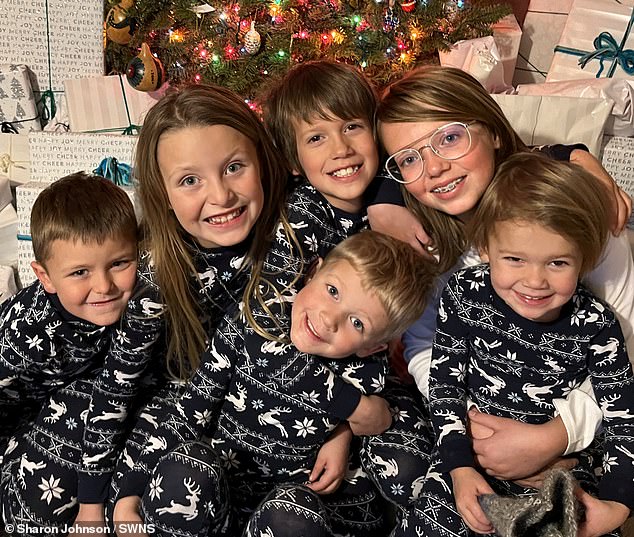 The stay-at-home mom admitted she limits screen time to one hour a week, only gives her children one cup and plate, one robe and has a weekly dinner schedule

To make mealtime easier, Sharon makes a rotating weekly dinner schedule which stays the same each week and sees each child choosing a meal.

And to take the edge off, Sharon admitted she wears earplugs in the evenings to get some much-needed peace and quiet before bedtime.

Sharon said: ‘We unexpectedly became a big family so it has been an adjustment.

‘We’re finally getting there and doing some of these things helps me with my mental load.

‘My sister suggested the yearly chore assignment and I thought she was crazy but actually it’s great.

‘The earplugs are great to reduce the loud noises in the evening.

‘I can still hear them but it’s not too loud that it breaks my brain.’

The mom has learnt some tips over the years to help her cope with her busy household.

‘They each have their own cup, water bottle and robe and they just have one each,’ she said.

‘It helps us keep on top of washing and stops squabbling over who gets what mug. I keep eight plates so we have to wash them throughout the day.

‘We let each kid do one musical instrument and one sporting extra curriculum to make it fair and financially viable.’ 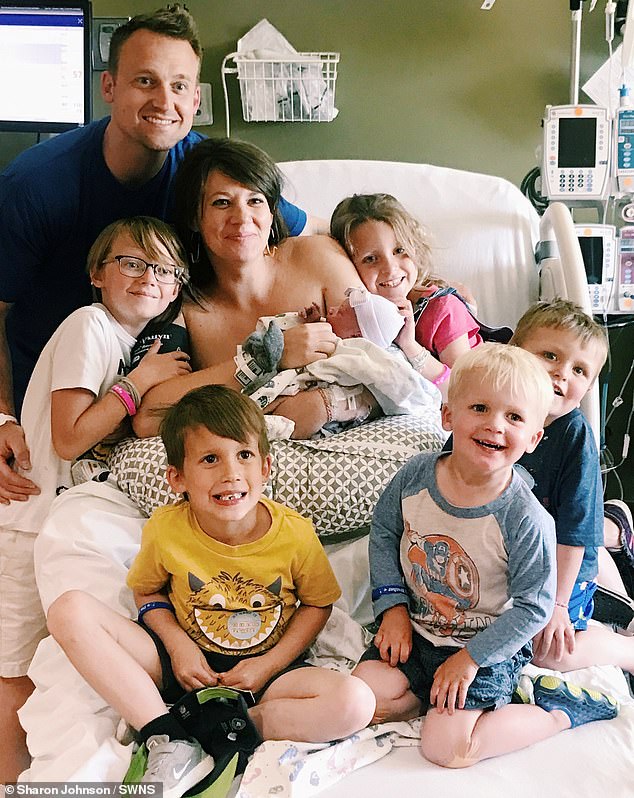 Because they ‘unexpectedly’ became a big family, Sharon noted that she has to enforce ‘stricter rules’ than other families and find ways to calm herself down 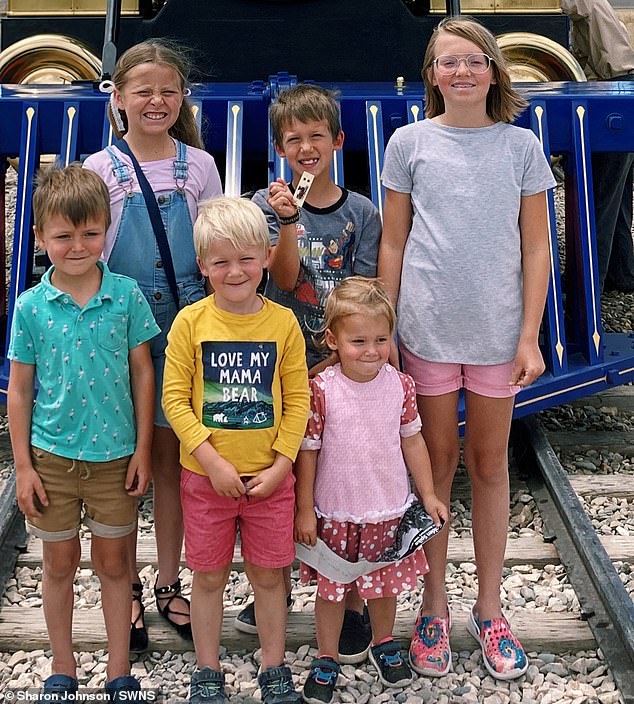 Sharon also gives each kid a chore for the year, instead of switching them up week on week to keep things simple

Sharon also gives each kid a chore for the year, instead of switching them up week on week to keep things simple.

‘My sister suggested it and I first I thought she was crazy but it helps me keep on top of what each of my children are doing,’ she said.

‘Nadine is a bit too young for a task so I help her make her bed.

‘My eldest Lusilia cleans the TV room and unloads the dishwasher.

‘Sophia cleans up the outside areas and cleans the downstairs bathroom.

‘Pratt does the upstairs bathroom and living room.

‘Coop takes out the bins everyday and cleans the hallway.

‘Philip feeds the cat and picks up anything left in the entry way.

‘The chores are suited to their ages.’

And the rotating weekly dinner schedule seems to be Sharon’s biggest savior as she swears it helps her out tremendously.

‘Each of the kids have picked out a meal for the week and we keep it the same until they get bored and want to change it,’ she said. 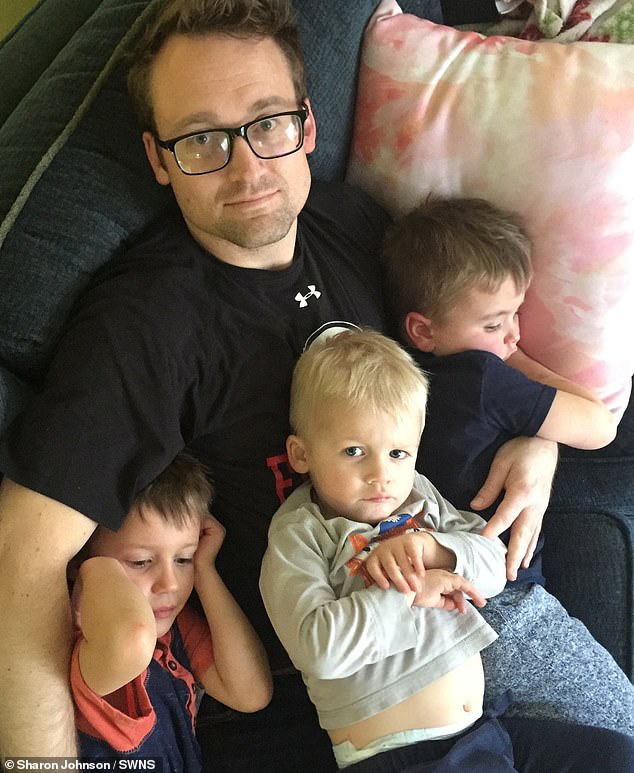 Sharon lives with her husband Kerry, 36, and their six children and is a stay-at-home mom, which has prompted her to come up with ways to ease the chaos 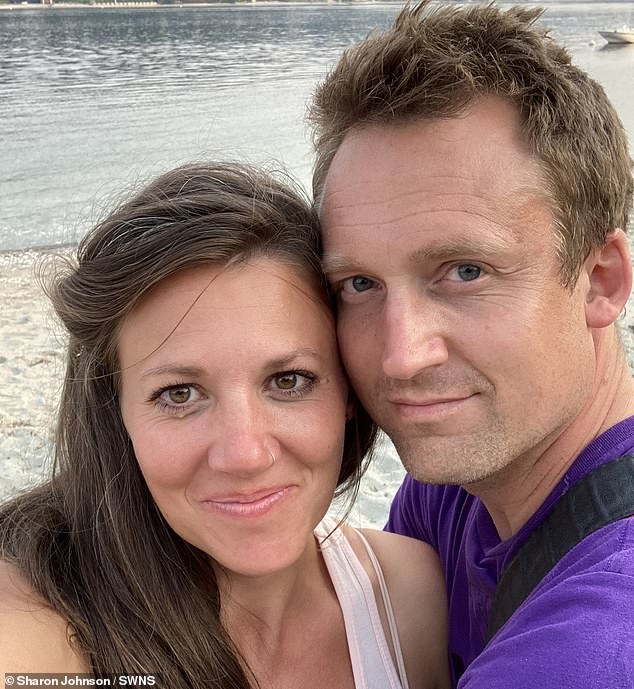 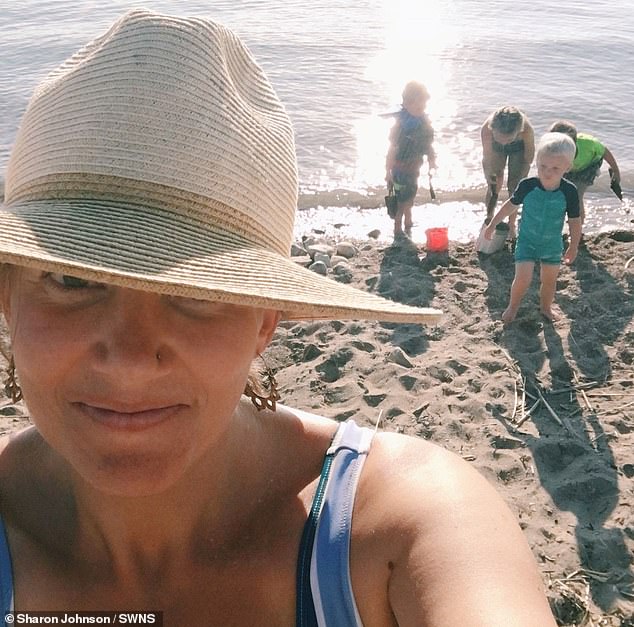 After dinner, Sharon breaks out her ear plugs and tries to calm herself down amid the chaos and said that the ear plugs ‘reduce’ the noise of her children ‘just enough’

‘Then we’ll just replace that one meal.

‘It doesn’t always go to plan and I’ll end up sticking in some chicken nuggets but it normally helps with my mental load and I don’t have to plan meals each week.

‘The kids help out in the kitchen with their chosen meal rather than all of them every night so it doesn’t get overcrowded.’

After dinner, Sharon breaks out her ear plugs and tries to calm herself down amid the chaos.

She noted that by using earplugs she can drown out the noise of her kids.

‘It can be a sensory overload,’ she said.

‘The ear plugs reduces it just enough that I can still hear them but just not as loudly.

‘I limit screen time to half an hour twice a week but sometimes I’m flexible with it.

‘As a family of eight we have to make stricter rules.

‘Everyone knows the expectations this way.’