The cruel way our country treats elderly dementia patients, levying what amounts to stealth taxes and siphoning off their life savings, is a disgrace reminiscent of Victorian Britain says Baroness Altmann

The cruel way our country treats elderly dementia patients, levying what amounts to stealth taxes and siphoning off their life savings, is a disgrace reminiscent of Victorian Britain.

We should be ashamed of the way that successive governments have ignored the scandal for decades, allowing a broken system to fester that strips hard-working families of their assets.

The unfairness is a shameful secret, one that many people don’t discover until it’s too late and they are caught in the financial trap. That’s why the Mail’s dementia campaign should be welcomed by all.

Everyone needs to understand how appalling and unfit for purpose the care system is. For too long, the Government has dithered over its green paper on social care, which has been postponed six times since its arrival was announced in March 2017. Every delay is yet another blow for families who face seeing a loved-ones’ hard-earned savings disappear.

It is also imperative that we put pressure on the Treasury to ring-fence funding so that people with dementia can benefit from state care without being at risk of losing everything they own – including their homes. At the moment, Alzheimer’s disease and other infirmities of old age are insensitively regarded as the ‘wrong’ kind of illness. A millionaire who contracts cancer can expect the best treatment available on the NHS, without having to fund it personally. All the costs are met by the tax system, with care free at the point of need.

But the same millionaire, or indeed an elderly widow, will have to pay and pay again. Only when almost all their savings and assets are whittled down to £23,250 will the local authority step in and meet the costs. To make the system doubly unfair, anyone with money to meet their own care costs has to pay extra to subsidise those of others.

Suppose, for example, the weekly cost of care in a local authority home is £500, but the council only pays £300 for each individual. Who makes up the £200 shortfall?

The answer: anyone in the care system with money left over. That’s why private individuals are charged £800 or more a week. And that’s if they’re lucky. It’s not unknown in some districts for people in care homes to be expected to contribute £1,500 a week.

That is effectively a grotesque type of tax – one that you only have to pay if you are hit by the ‘wrong type’ of illness.

Last week, this newspaper revealed that, in total, families spent £15billion on dementia care in the two years that they have been waiting for ministers to reform social care. How monstrous. How unworthy of our country. When William Beveridge devised the basis of the welfare state in 1942, to fight the five ‘giant evils’ of ‘want, disease, ignorance, squalor and idleness’, he could not have imagined the dementia crisis to come. In the 1940s, it was rare for people to live into their late-eighties and beyond, and perhaps spend years in a care home, unable to fend for themselves.

There were no mass-produced antibiotics. Cancer treatments were rudimentary. When frail elderly people became ill, they either recovered or they died. They did not continue to live for years.

Divorce and family breakdown were also rare back then, and people tended to live in one area all their lives. As a consequence, it was much more common for people with dementia to be cared for by relatives. 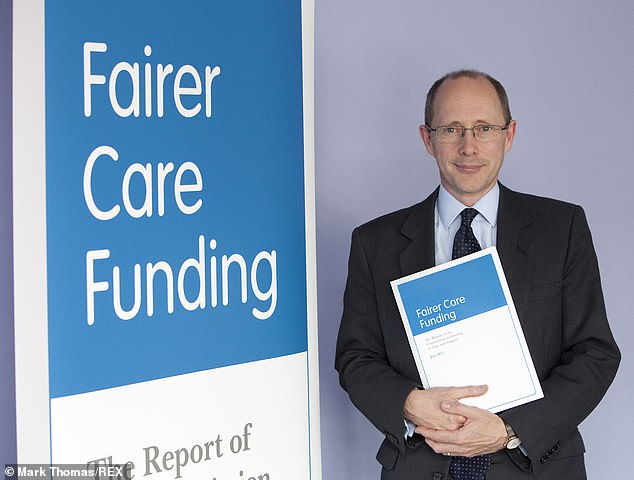 A Coalition-commissioned study by economist Sir Andrew Dilnot (pictured) called for a cap on the amount people have to pay for care, proposing that the state step in to pay the rest. After several delays, the Tories pledged to introduce this cap at £75,000 by 2016, which was put back to 2020 – then shelved entirely

Those who had no-one and nothing would have to apply to their local council. Beveridge would be horrified to see the modern day realities of local care.

Cash-strapped councils treating dementia patients like second-class citizens have had to cut back on the services that used to help people manage independently, such as Meals On Wheels or home adaptations.

That leaves elderly people at greater risk and without preventative measures which keep them safer and healthier. Rather than working with hospitals to provide the best possible service, councils have a financial interest in elderly patients staying in hospital longer. They only pick up the cost when the poorer people leave the NHS. Is it any wonder that it takes so long to make care arrangements?

This not only places the patient at greater risk of picking up an infection but also exacerbates the current beds crisis in the NHS. In sum, everybody loses.

And yet all this could have been prevented if government had come up with a plan to accommodate the problems of an ageing population. Around six million baby-boomers, born between the end of the Second World War and the start of the 1960s, are now retired or getting close to retirement. No one can say this has come as a surprise. The demographic timebomb has been ticking for a long time. Financial provision should have been made long ago.

The first Royal Commission on long-term care highlighted this in 1999, and successive reviews and committees made the point with increasing urgency.

The truth now is that even if the Government addresses the emergency and increases National Insurance payments or tax to meet the costs, baby-boomers are now dropping out of the working population. The burden will fall on younger generations – yet one more layer of unfairness.

Expecting local authorities to pay the costs by increasing council taxes won’t work either. Areas with the highest costs for dementia care tend to be those with the oldest average populations and the highest proportion of pensioners – those least able to pay more.

It’s a grim contradiction: the more money councils need, the less they can raise, without punishing people for getting ill.

Cash-strapped councils treating dementia patients like second-class citizens have had to cut back on the services that used to help people manage independently, such as Meals On Wheels or home adaptations.

The Government must step in. Social care cannot just be left to councils.

Our antiquated system, the last vestige of the Poor Laws, has to be swept away with the proper integration between healthcare and social care. We must end the artificial distinction between different illnesses. We need to end the postcode lottery. And personal care must be free not only in Scotland but across the whole country.

Indeed, I believe most people in this country would support a national initiative that ensures everyone contributes to the cost of care. Yet politicians blithely ignore the crisis, perhaps because it isn’t a vote-winner or because they know people tend to instinctively shy away from thinking about whether they might need dementia care one day.

Of course, there’s no single answer to solve the care crisis. For instance, subsidised equity release or life insurance policies that pay out early if long-term care is required. We already have provision for people to withdraw part of their pension pots. That could be extended to enable people to withdraw money tax-free to fund any care needs: in some cases, this might help families to keep their homes. And financial advisers should give much better advice about the costs of late-life care. 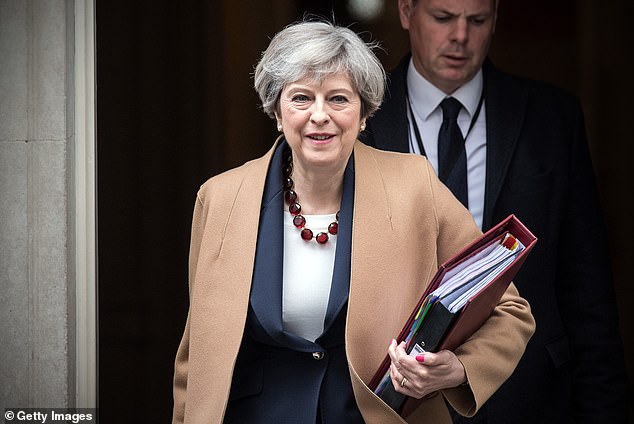 Theresa May’s election manifesto proposed extending the current system so money could be taken from assets to fund home and residential care after someone died – nicknamed the ‘dementia tax’. It prompted a backlash and is considered a crucial factor in the Tories’ reduced majority

Instead of withdrawing tax-free lump sums from pensions to pay for kitchens or cruises, many people would be much wiser to keep the nest-egg for care home costs.

Incentives for people to keep their ISAs as ‘a Care Fund’ rather than spending them would also help.

But none of this will matter if the Government doesn’t take action now.

People with dementia are our loved ones, our family and friends – possibly even our own selves, now or in the future.

They are not packages to be shuffled and shelved at the lowest cost and the least convenience. We need to bring back a sense of humanity and pride in this crisis – because at the moment, it is a source of nothing but shame.