Former footballer Allan Gilliver burst into song the other day. A friend, taking pictures, joked ‘give us a smile’ and it sparked something deep inside. He burst into a rendition of Smile Though Your Heart Is Aching, which made his wife Christine laugh, then cry.

Allan, 77, who played centre forward for Bradford City, has dementia. He tells us this himself at the start of a powerful BBC documentary called Dementia & Us, which follows four families across Britain as they negotiate life with the cruellest of diseases.

By the end of the film, when his decline has led to him spending more and more time in bed, Christine, 67, has taken over most of the explaining. Today, as they’re preparing for the film to air, he has slipped away from her that little bit more.

Four families across Britain negotiate life with the cruellest of diseases in BBC documentary Dementia & Us – including Allan Gilliver (pictured), who was diagnosed nearly ten years ago 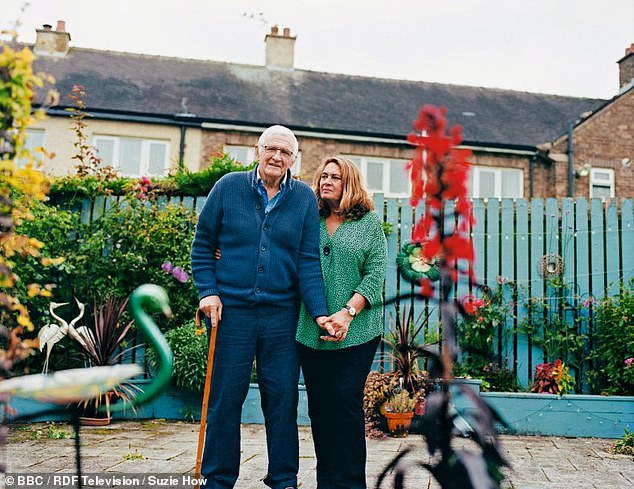 Allan’s wife Christine, 67, said she has agreed to some respite care, but Allan is not going into care full-time. Pictured: Allan Gilliver with his wife Christine

‘He can’t really talk now,’ she says. ‘He would spend all day in bed if I didn’t make him get up. Sometimes I go upstairs with my book, get into bed beside him and put the radio on. I might sit him up and he’ll watch the birds. He’s there, still, but I’m losing him.’

Their story is heartwarming, but also heartbreaking. This is a film as much about carers, and the demands on them, as the people with dementia. Allan (or Gilly, as he’s known) was diagnosed nearly ten years ago, and Christine says they talked about whether they would do this documentary, agreeing that they needed to.

Dementia is a tough subject to film because there’s never a happy ending.

‘It’s important,’ says Christine. ‘I don’t think people understand what dementia is. It’s not about losing your keys. It’s about your brain shutting down your bodily functions. It might take a long time, but every day you lose a little tiny bit.’

Dementia & Us is at times a devastating watch. Christine is filmed reaching the end of her tether. Gilly, like many people with dementia, becomes aggressive, leaving her with bruises.

‘I’ve accepted I need help, and I agreed to some respite care, but he’s not going into care full-time,’ she tells me. Every family taking part has a different story.

The film also features ex-squaddie Chris and his sister Liz, in Manchester. They are one of just 100 families in the UK who are aware they might carry a defective gene that causes Alzheimer’s.

There are four siblings, each with a 50/50 chance of inheriting the gene. If they have it, their own children will be offered testing. Chris and Liz’s father died in 1981 aged 45 from this form of dementia, their aunt at 38.

As children, they were never told. Mother-of-two Liz explains that when she was first offered genetic testing she said no. ‘I didn’t want to know.’ She eventually did get the test, and it was negative.

Chris and their elder brother Tony were not so lucky. Tony died during filming and the documentary focuses on Chris, 45, who admits, ‘I’m next in line.’

Although there is no cure for dementia, the knowledge of how it progresses is increasing. Future generations may benefit. This, say both these families, is another reason why they wanted to take part in the series, to boost research fundraising.

Both Gilly and Chris are taking part in research doing vital work for individuals who will have to deal with this in the future – while they still can.