A New Way of Seeing: The History of Art in 57 Works

A new book has revealed the crucial hidden details you have missed in some of the world’s most well-known paintings.

Cultural critic Kelly Grovier, who was born in California but lives in Ireland, has explored every element of 57 different works of art to discover their secrets for his latest book.

A New Way of Seeing: The History of Art in 57 Works hopes to change the way people view these incredible pieces forever through recognising their hidden meanings.

From Sandro Botticelli’s The Birth of Venus to Edvard Munch’s The Scream, the book helps guide viewers to seemingly innocuous details that are actually bursting with meaning.

‘I wrote A New Way of Seeing because I wanted to understand what makes great art great,’ Kelly said.

‘I sensed there were hidden mysteries and strange depths to the paintings and sculptures that we all know by heart but never really look at. I wanted to help readers reconnect with those masterpieces that have the power to enrich our experience of the world.’

Here, Kelly reveals the details you might have missed in some very recognisable paintings…

Sandro Botticelli, The Birth of Venus

Sandro Botticelli, The Birth of Venus, c. 1482-85, tempura on canvas, 172.5 x 278.9 cm: Kelly said: ‘In Botticelli’s famous painting, Venus windsurfs to shore on a supersized scallop shell. Striking a pose, she gently tilts her head towards a curlicue of golden hair that has miraculously spun itself into a perfect logarithmic spiral on her right shoulder. Too precise to be an accident of brushwork, this seashell-shaped curl whispers sweet nothings in the ear of the goddess who listens intently’ 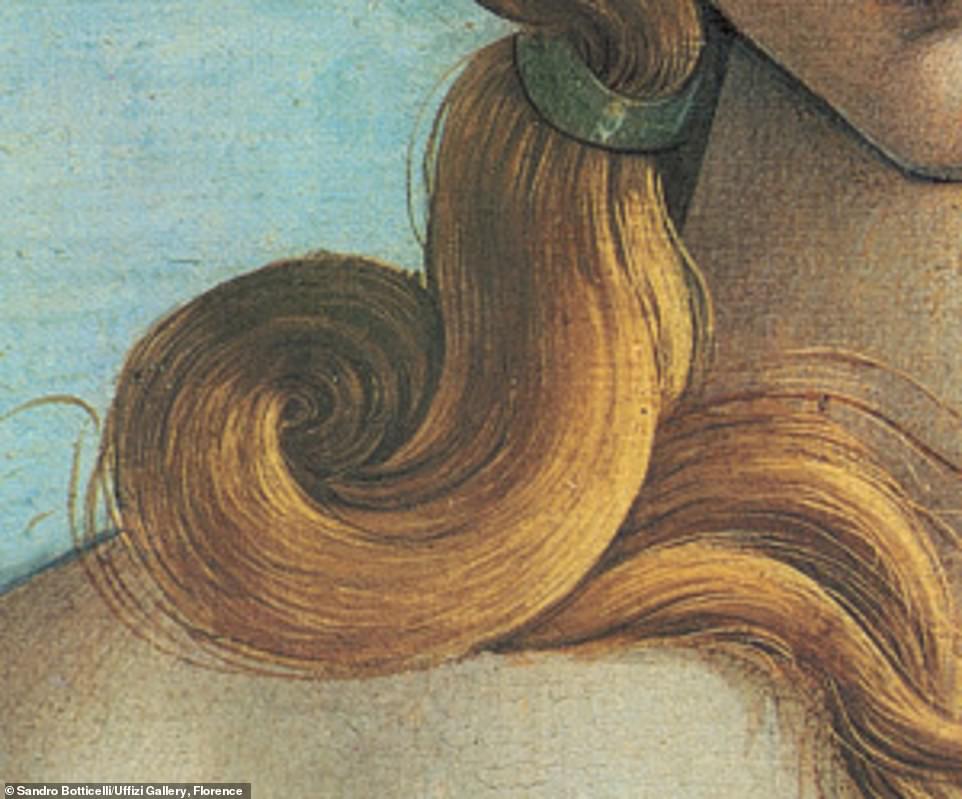 Kelly said: ‘Since antiquity, this same spiral has mesmerised mathematicians as an intriguing twist of natural grace – observable in everything from flowers to cyclones, the swoop of raptors to the whorl of galaxies. It will eventually be christened Spira mirabilis (‘the marvellous spiral’) by a Swiss thinker, Jacob Bernoulli, at the end of the 17th century. And what, exactly, is the spiral murmuring to Venus in Botticelli’s masterpiece? Nothing much: just the secret to timeless beauty’ 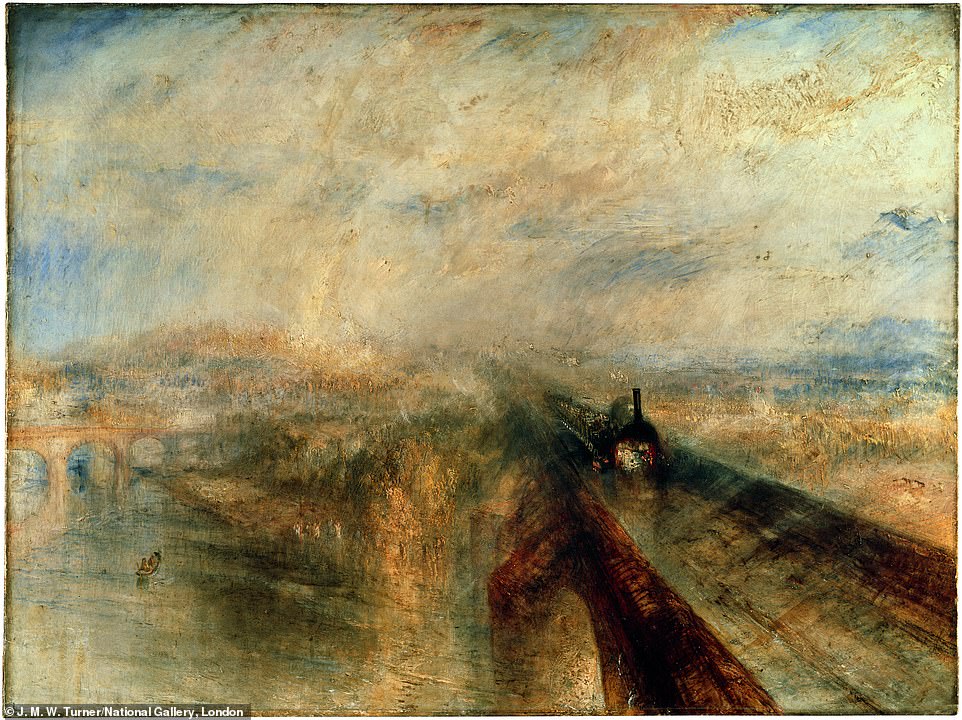 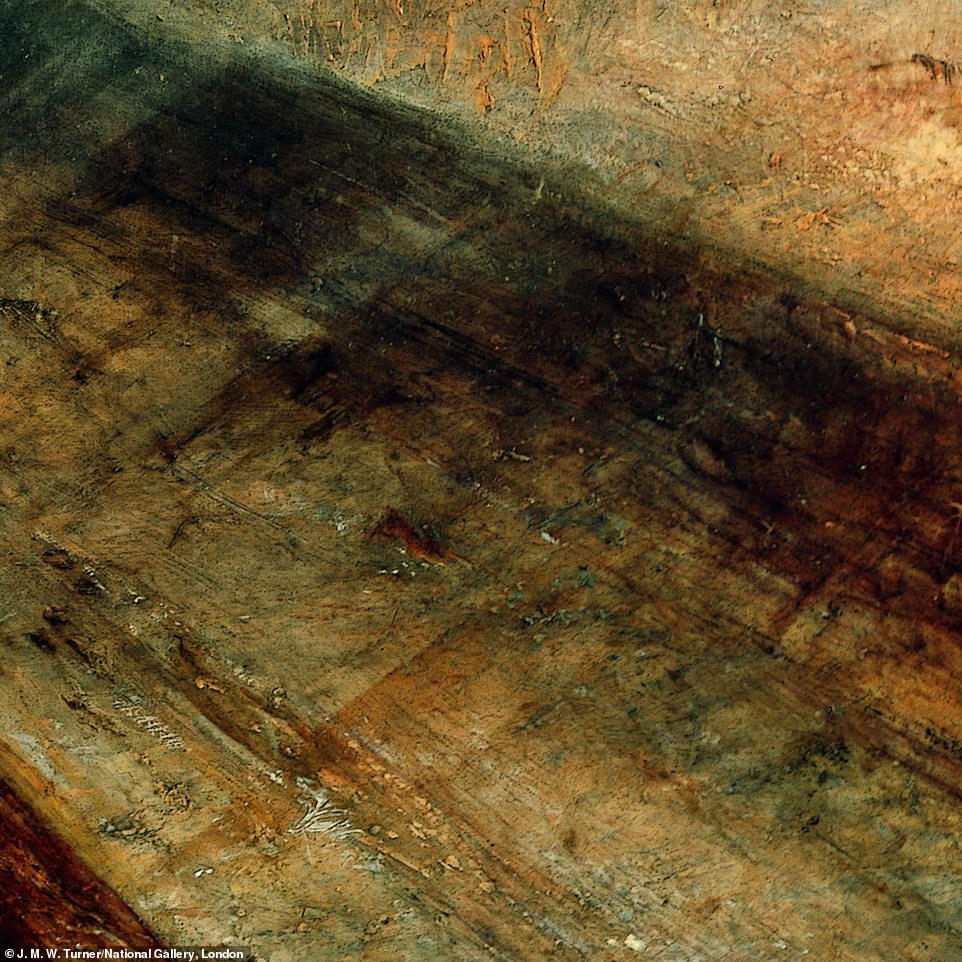 Kelly said: ‘Ten miles from the bridge depicted in the painting, a train derailed and nine third-class commuters were killed and another sixteen disfigured. With a tender painterly touch, Turner pays tribute to the wrenching loss. Dashing out ahead of the locomotive is a deftly enunciated hare – since antiquity a symbol in art of rebirth and hope. The tiny hare, easily lost in the mire of shadow and tracks, alone rescues the work from being an abstract statement on the collision of technology and nature to something more intimate and heartfelt’

Édouard Manet, A Bar at The Folies-Bergère 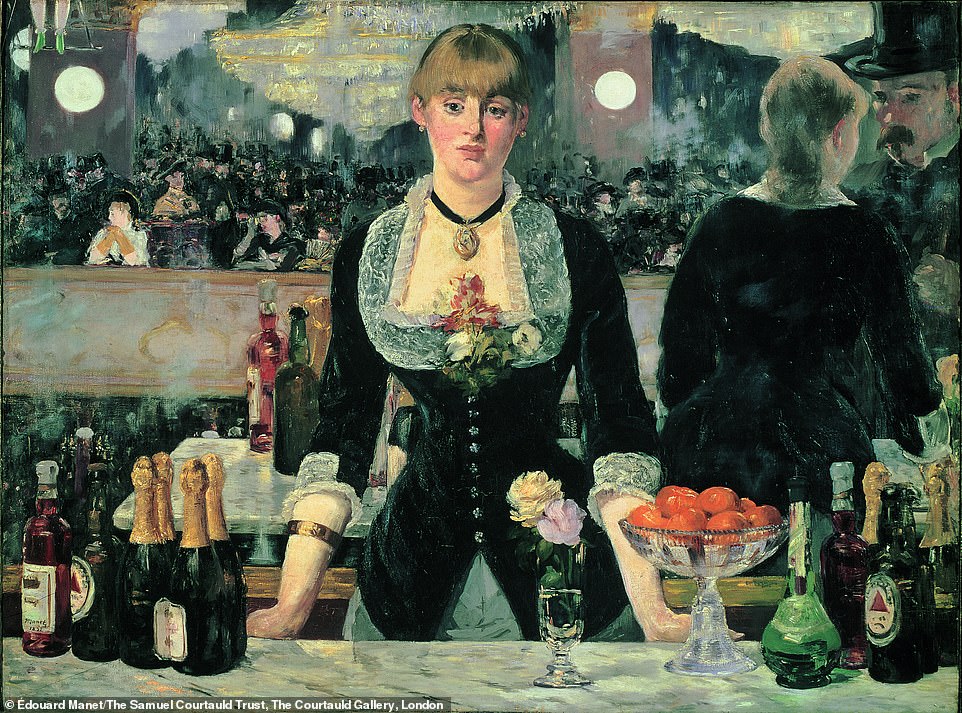 Édouard Manet, A Bar at The Folies-Bergère, 1882: Kelly said: ‘On either side of the barmaid in Édouard Manet’s famous depiction of a raucous cabaret in Paris, bottles of a British beer manufactured by the Bass Brewery call attention to themselves by the distinctive, red triangle printed on their label. The very first officially protected trademark in the United Kingdom, the Bass logo may seem a strange product placement in a proto-Impressionist masterpiece; yet it is key to unlocking the work’s meaning and poignant power’ 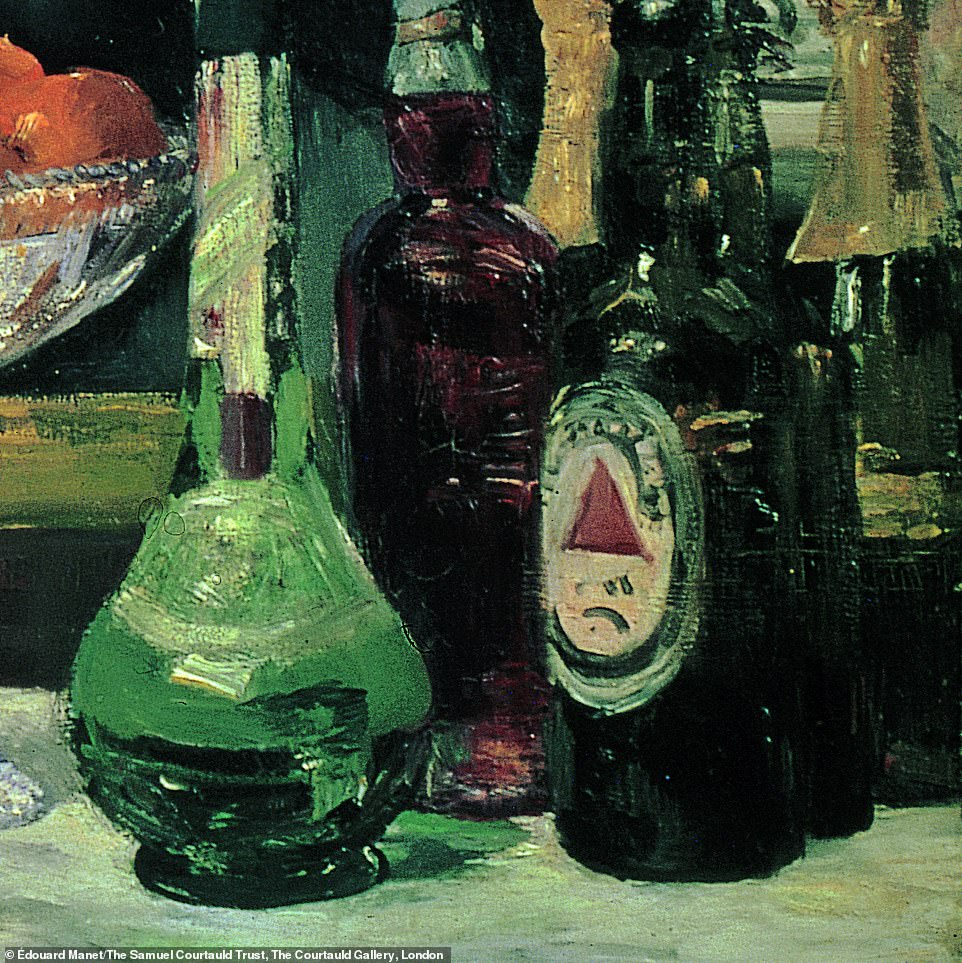 Kelly said: ‘Seen in the context of the commercial label, the spray of roses across the barmaid’s cleavage, which takes the organic shape of a red triangle, marks her out as a product to be purchased and consumed – a woman to be bought and sold. The Folies-Bergère was well-known as a place where barmaid’s moonlighted as prostitutes. Suddenly, the shadowy man we see approaching her from the right in the mirror behind her is a trader in souls, and we, standing precisely where he is, are implicated in the transaction’ 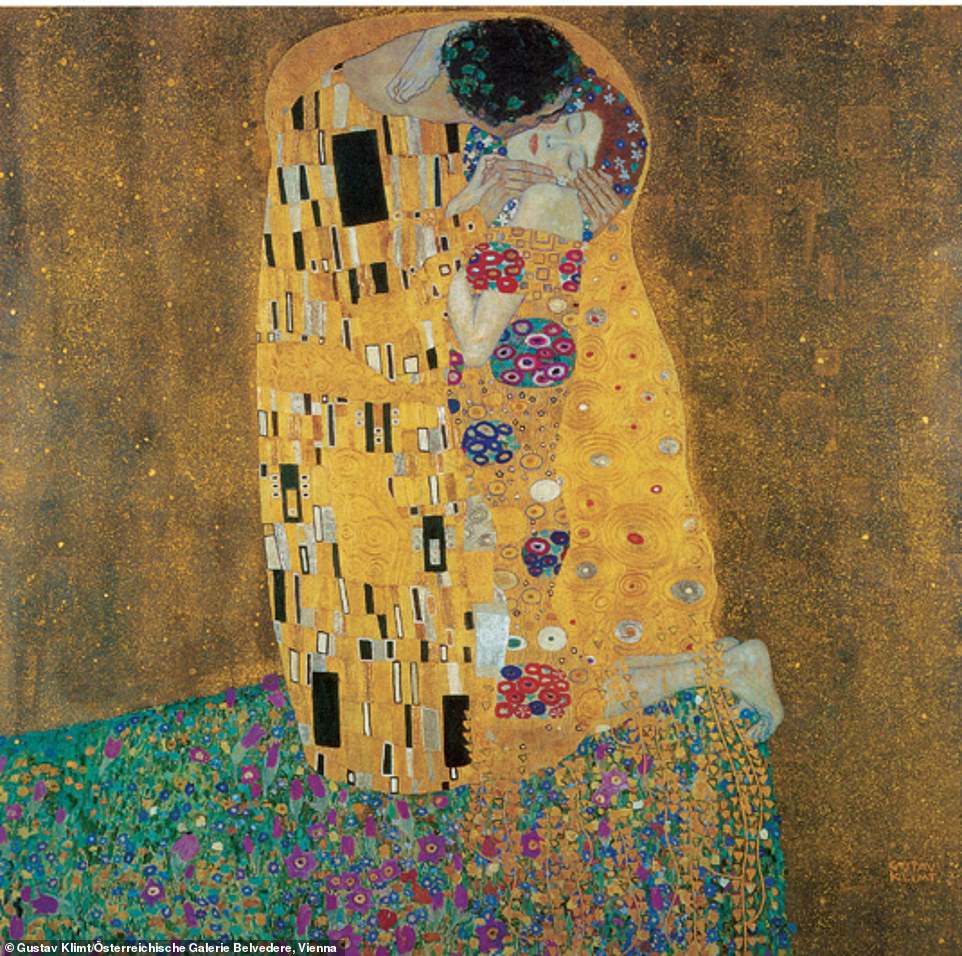 Gustav Klimt, The Kiss, 1907, oil and gold leaf on canvas: Kelly said: ‘Look closely at the woman’s resplendent frock in Gustav Klimt’s much-adored portrait of passion, The Kiss, and it appears decorated with round Petri-dish-like slides teeming with pulsing cells. In 1907, the year Klimt painted his iconic work, the air in Vienna was abuzz with talk of platelets and plasma, red blood cells and white’ 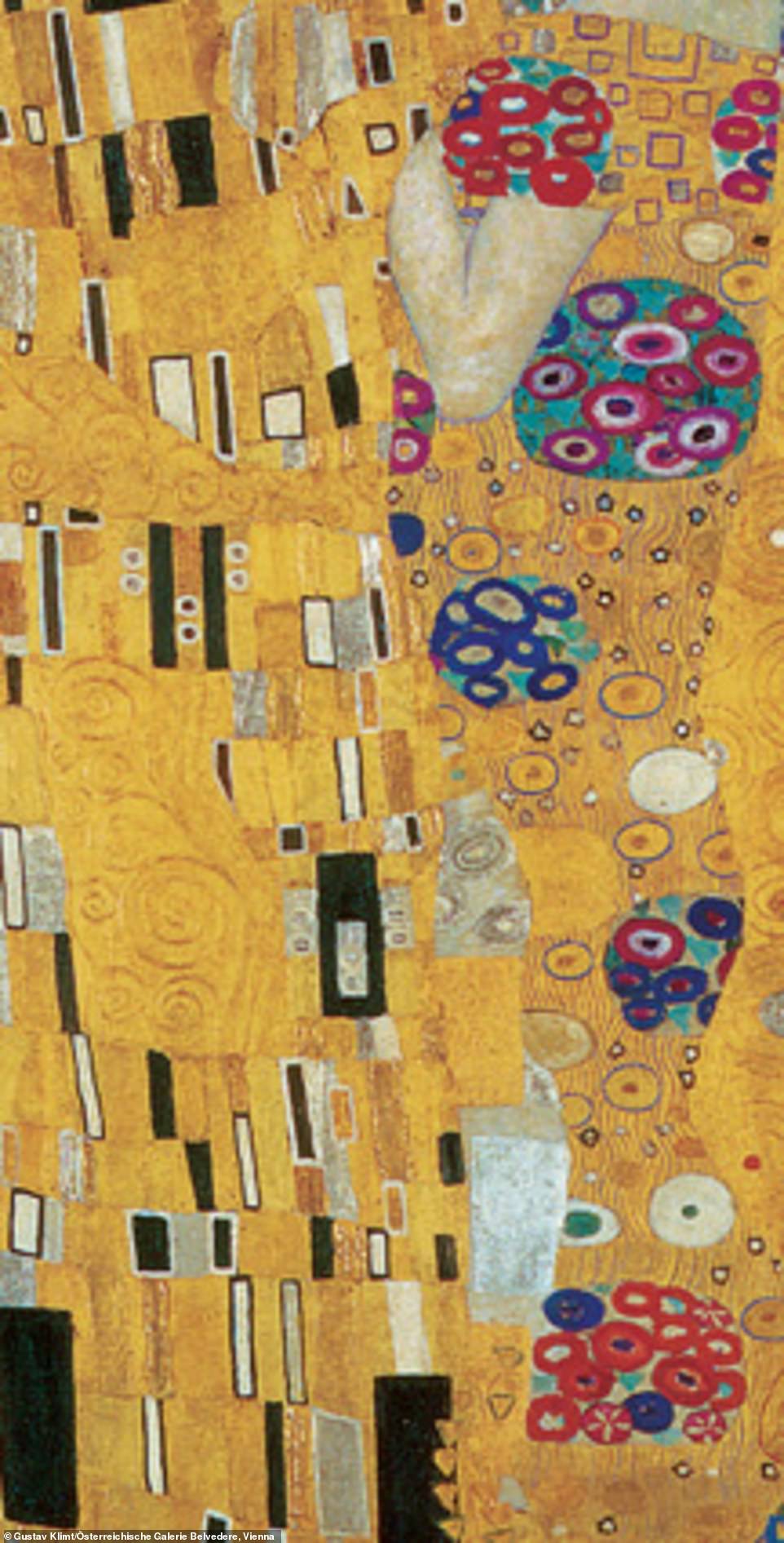 Kelly said: ‘At the University of Vienna (where Klimt himself had been commissioned to create some paintings based on medical themes), Karl Landsteiner, a pioneering immunologist who was the first to distinguish blood groups, was busy investigating how to make blood transfusions work. Within each of the opulent ovoid slides that Klimt has stitched into the woman’s frock, vibrant platelets and agglutinating blood cells judder and throb, as if a microscopic glimpse into her cellular constitution has just been obtained – as if the artist has glimpsed a luminous biopsy of never-ending love’ 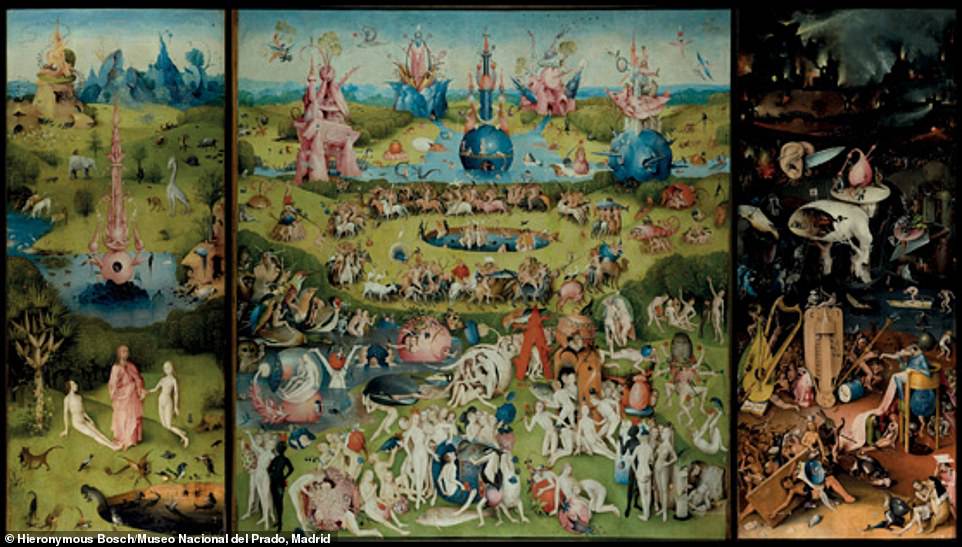 Hieronymus Bosch, The Garden of Earthly Delights (triptych open), 1505-10, oil on panel: Kelly said: ‘To crack the code of Hieronymus Bosch’s famously cryptic vision of fleshly shenanigans, you must first find the Easter egg he’s hidden for us in his carnal garden. To locate it, all you have to do is draw a cross: imagine tracing a line down the very middle of the work vertically and one across its equator horizontally and, voilà, ‘egg’ marks the spot at the dead centre of the masterpiece’ 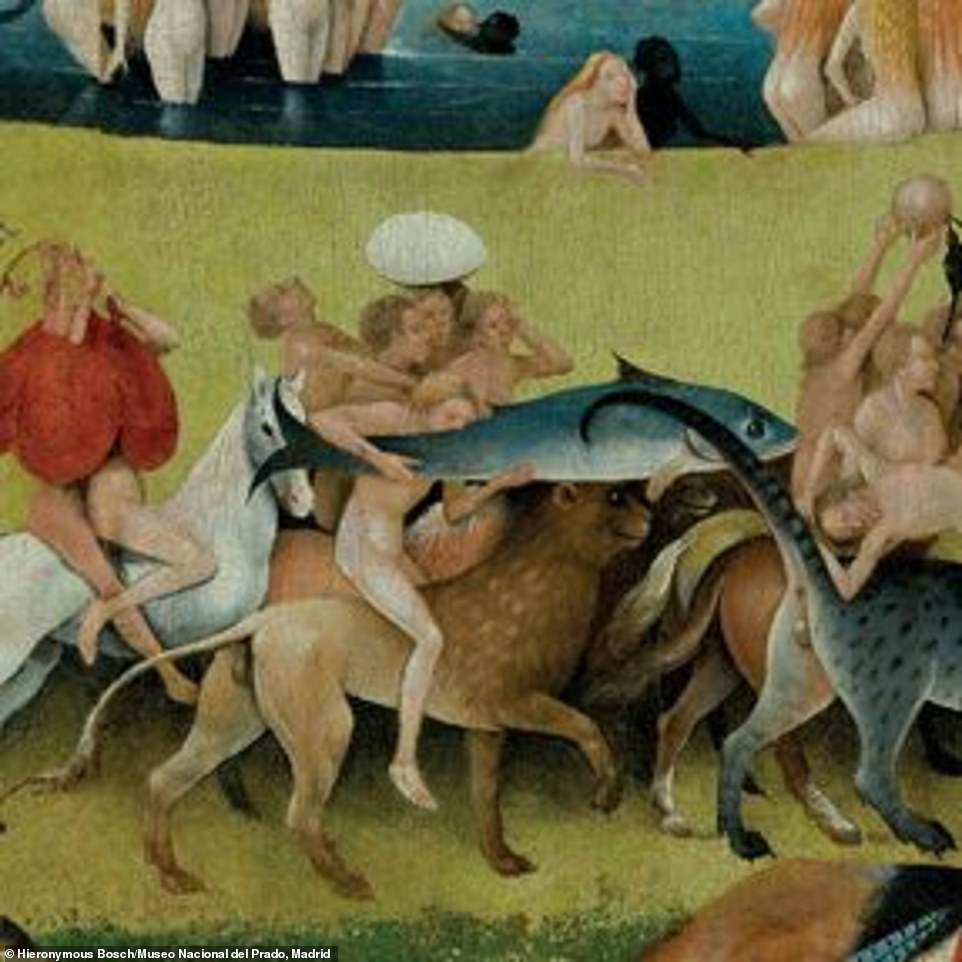 Hoisted onto the head of a traveller, a breakable but, as yet, still unbroken eggshell stares back at us like a piercing pupil-less eye, reminding us how precarious the soul’s journey is through this world and the next. When Bosch’s triptych is closed, it reveals a cosmic depiction of the world floating in space: a ghostly egg we endlessly crack open every time we swing the work’s hinges wide 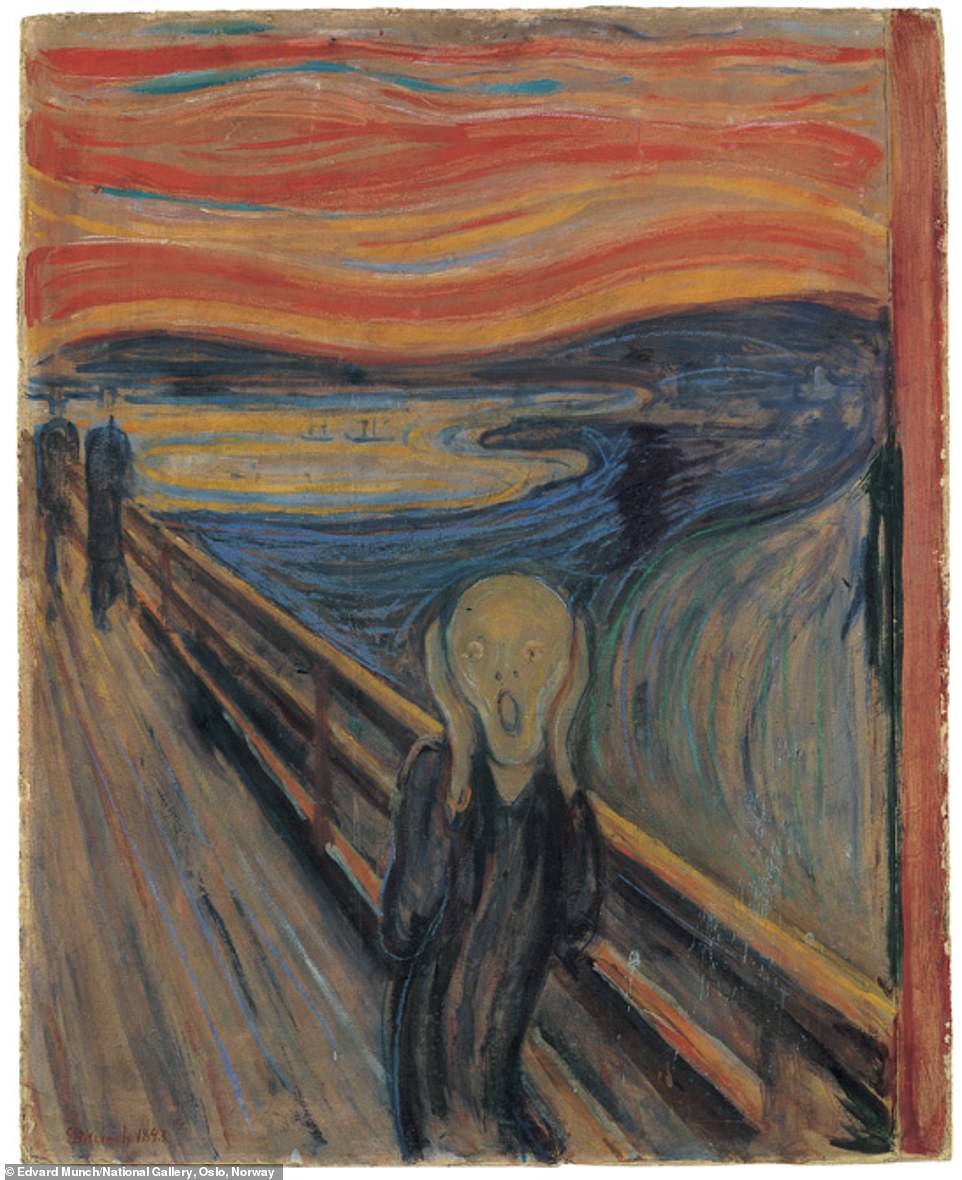 Edvard Munch, The Scream, 1893, oil, tempera, pastel and crayon on cardboard: Kelly said: ‘Edvard Munch’s 1893 portrait of a howling figure has become an archetype of existential angst and continues to hypnotise, like a flickering bulb swaying above us. Munch took an anxious interest in electricity and the technological advances of the day, and once confessed to his journal that he was haunted by a mysterious shape that ‘directed the wires — and held the machinery in his hand’ 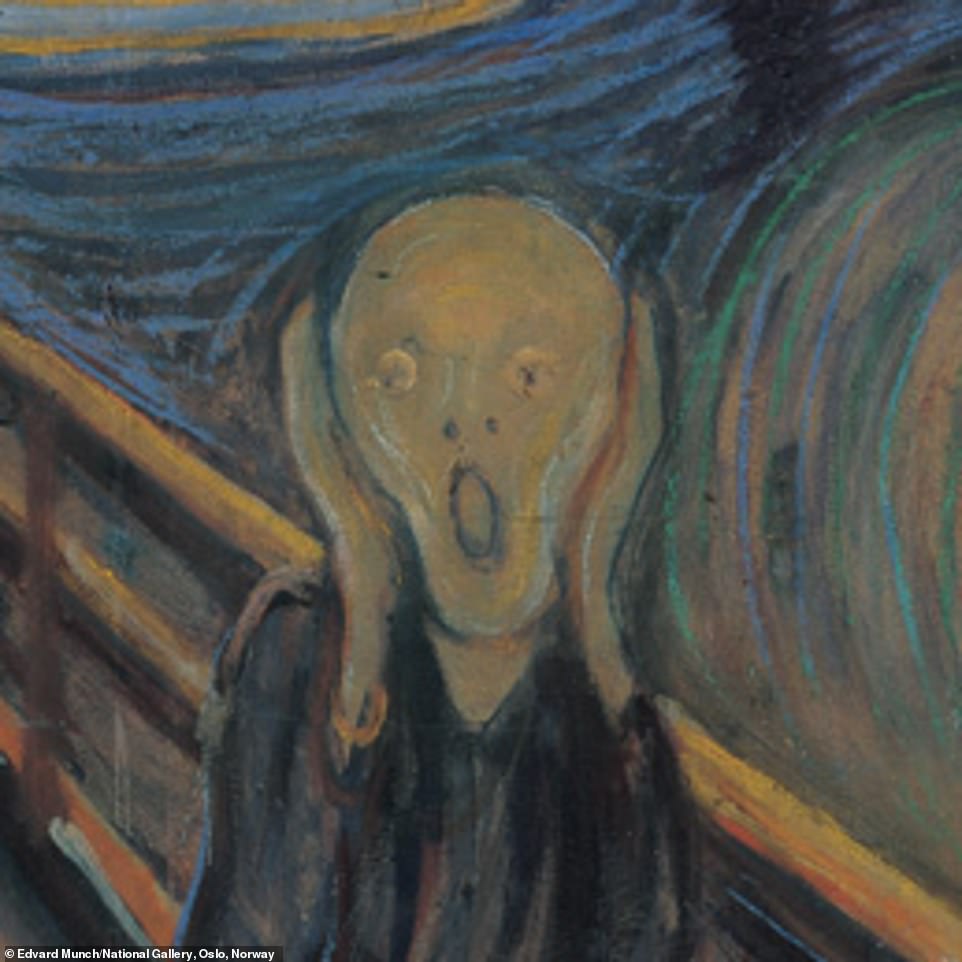 Kelly said: ‘One can only imagine how he reacted to the spectacle at the 1889 Exposition Universelle in Paris of 13,000 incandescent lamps arranged into the luminous shape of a gigantic light bulb. Like a bulging glass skull whose bulbous cranium tapers to an elongated jaw, the lamp towered above visitors. The shape appears to have seeped deep into Munch’s imagination. It flipped a switch. The yowling head that glows in The Scream echoes with uncanny precision the crystalline contours of Edison’s modern god’

A New Way of Seeing: The History of Art in 57 Works by Kelly Grovier (Thames & Hudson) is available on Amazon now.