A nine-year-old boy who bravely endured years of gruelling treatment battling a rare form of a childhood cancer is now free of the disease.

Henry Hallam was just three when he was diagnosed with neuroblastoma, the same cancer that killed Bradley Lowery.

It affects around 100 children each year in the UK and has one of the lowest survival rates of all childhood cancers.

People took the little boy to heart and hundreds of thousands of pounds were raised in his name through the charity Hugs from Henry.

Henry Hallam was just three when he was diagnosed with neuroblastoma, the same cancer that killed Bradley Lowery (pictured recently smiling after being told he is cancer-free) 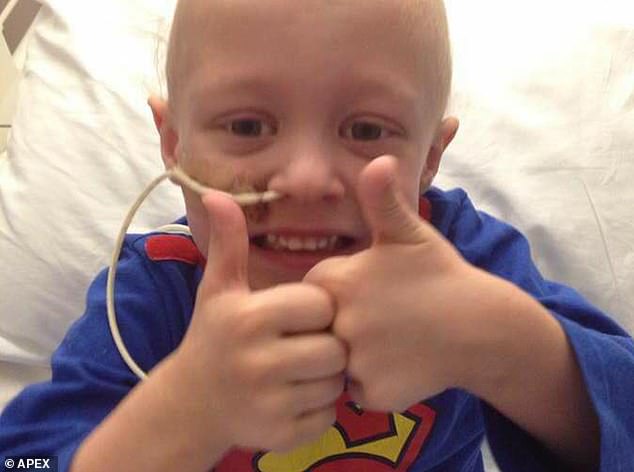 The smiling soldier before and after: Henry, from Plymouth pictured having treatment (left) 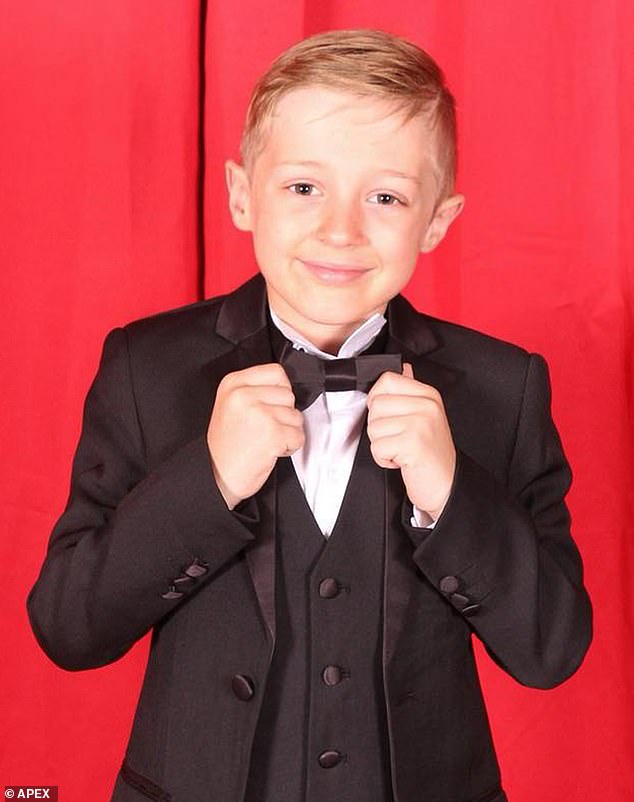 His mother, Elsbeth, from Plymouth, Devon said: ‘He went through such aggressive treatment and he’d already been through so much.

‘It was just very, very tough. Even though we do have a lot of hospital appointments he has a relatively normal life.

‘We go out, we ride our bikes and we enjoy family life together.’

Despite the immense challenges the family has faced, Mrs Hallam wants to spread the message to others that children who battle the disease can live a normal life.

Henry continues to suffer from the side effects of his treatment and will still have medical tests until he is 16 but five years after treatment is finally cancer-free.

The all-clear was reached after Henry’s tumours remained the same for the period since his cancer treatment started. 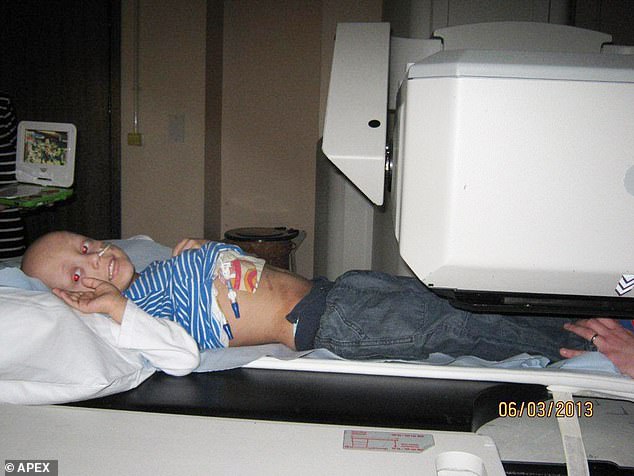 Boy power! People took the little boy to heart and hundreds of thousands of pounds were raised in his name through the charity Hugs from Henry 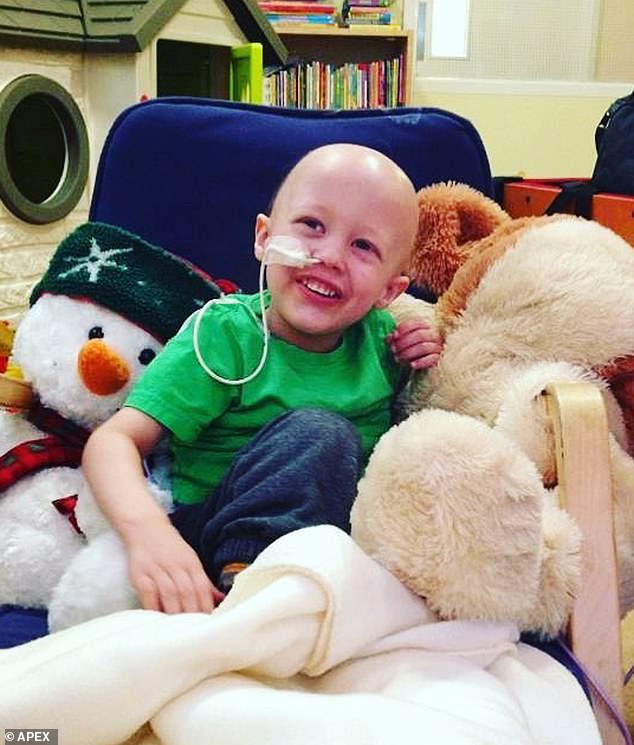 Always smiling: ‘He’s done amazingly well,’ said mum Elsbeth. ‘Neuroblastoma has one of the lowest survival rates in children – just one in five.’

Mrs Hallam added she was extremely proud of Henry for battling the disease for six years.

‘He’s done amazingly well,’ she said. ‘Neuroblastoma has one of the lowest survival rates in children – just one in five.

‘Whereas something like leukaemia has a four in five survival rate. Neuroblastoma is very aggressive.

Henry underwent nearly three months of chemotherapy to begin with, before having major surgery, stronger chemo, a stem cell transplant, radiotherapy and antibody treatment as part of a medical trial, according to the Hugs from Henry charity.

He was first diagnosed aged three but the proceeding years have seen hundreds of thousands of pounds raised in his name through the charity Hugs from Henry.

Mrs Hallam, who is a qualified nurse, runs the charity full time.

She said: ‘We went to see Henry’s oncologist and they are happy that he has reached five years post treatment, his tumours have remained the same and at this point they feel this is scarring/old cells that won’t spread.

‘He is cancer free! He will always have an oncologist but will now be part of the long term follow up team until he is 16.

‘We will still have many appointments for all of his side effects caused by the treatment but no more scans no more oncology unless we need it.

‘Our oncologists last words to us were “Get on with your life and try and move forward”.

‘We now await a call from Bristol where Henry will ring the end of treatment bell.’ 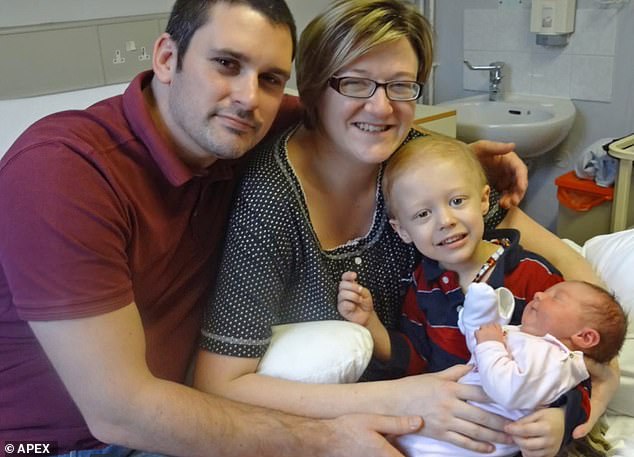 Family strength: Henry pictured with his ‘super sibling’ Georgie, plus parents Elsbeth and father, Michael, who remained a defiant team

Hugs From Henry was set up in 2015 by Henry’s parents after closing previous charity Hugs for Henry.

That was due to not needing an active appeal for Henry and wanting to support other families affected by neuroblastoma, whether that be emotional or financial support, and provides them with a place to turn.

Speaking of her emotion at the latest news about Henry, Mrs Hallam said: ‘So many tears of relief and also a feeling of numbness, has this really happened?

‘Is Henry really cancer free?! This journey has shaped us into the people we are today and I’m so proud of Henry and his super sibling Georgie.

‘Thank you to each and every person who has supported us along the way and continue too as those closest to us will know it doesn’t end when treatment stops.

Neuroblastoma is a rare cancer that affects children and usually starts in the abdomen.

Around 100 children, who are typically under five, are diagnosed every year in the UK.

The disease affects approximately 700 new children annually in the US.

In around half of cases, neuroblastoma spreads to other parts of the body, particularly the liver and skin.

Neuroblastoma’s cause is unclear. There may be a family-history link.

The main symptom is usually a lump in the abdomen, which may cause swelling, discomfort or pain.

If the disease affects the spinal cord, it can lead to numbness, weakness and loss of movement in the lower part of the body.

Treatment depends on how advanced the cancer is and the risk it will return after therapy.

Surgery, and chemo and radiotherapy, are commonly used.