Every prisoner is to be given a telephone in their cell in a £17million move to cut reoffending.

All inmates, including killers and rapists, will be able to speak to friends and loved ones ‘in private’ any time, day or night.

The move is part of a radical plan from Justice Secretary David Gauke to help rehabilitate offenders and stop them returning to crime when freed. Landlines will be installed in 50 jails by March 2020, then extended to all 118 prisons in England.

Justice Secretary David Gauke, pictured, wants to install landlines into each jail cell in an effort to reduce criminality, allowing criminals to call friends and families at any time

Tory MP Andrew Rosindell condemned the scheme, saying: ‘I thought the idea was to punish criminals and take away their freedom and creature comforts.

‘Prison becomes less of a deterrent when the authorities do things like this. It’s time to think of the welfare of the victims.’

In most prisons, inmates have to queue to use communal phones. This leads to friction and violence, as well as a booming trade in illicit mobile phones.

Around 20,000 phones and Sim cards are confiscated each year. They are often used to run crime gangs, smuggle in drugs and arrange the intimidation of witnesses. Officials hope the scheme will help inmates maintain family ties and reduce the risk of reoffending.

It will also make it easier to speak to the Samaritans and mental health charities, reducing the risk of self-harm – another major challenge for jails. 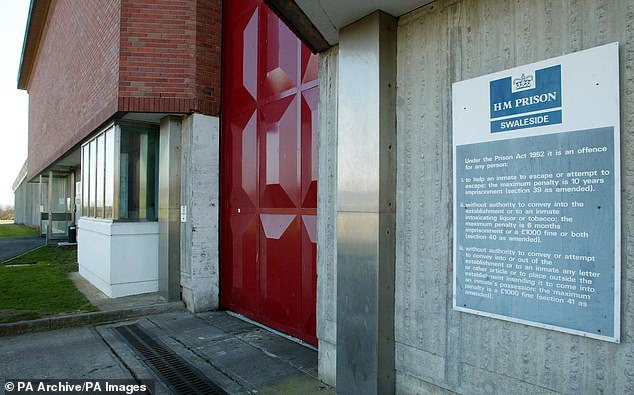 Already in place at 20 prisons, the phones are subject to strict security measures. All calls are recorded, users can dial only a small number of approved numbers and active monitoring can be introduced if there is suspicious activity. Inmates will need to buy phone cards to pay for calls.

Governors can remove the phones – or impose restrictions – if they believe they are being misused.

Mr Gauke hailed the launch of the scheme, saying: ‘At this time of year more than any other we’re reminded of the importance of family, and there can be few groups that this applies to more than prisoners.

‘In-cell telephones provide a crucial means of allowing prisoners to build and maintain family relationships, something we know is fundamental to their rehabilitation.

‘Introducing them to more prisons is a recognition of the contribution that I believe in-cell telephones make to turning prisons into places of decency where offenders have a real chance to transform their lives.’

But David Green, a former Home Office adviser and chief executive of the Civitas think-tank, said: ‘While there is some evidence of retaining family links leading to less reoffending, giving prisoners phones assumes that their family is a good influence. That’s not always the case.

‘Sometimes they are a bad influence. Common sense says that there is a danger phone calls will be abused. They could be used to oversee continuing criminal activity or collaborate with others about keeping stolen goods or proceeds of crime hidden.

‘If things go wrong witnesses could be intimidated or paid off. They could be used to settle scores or for retaliation. Also, a prison sentence has been meted out by the court so this could be seen as relaxing the punishment.’

Harry Fletcher, director of the Victims’ Rights Campaign pressure group, said: ‘Some people might be angry at this. But illegal mobile phones smuggled into prison are already used to organise crimes on the outside and are a source of violence inside.

‘If landlines reduce illegal activity and disorder it will be a step in the right direction. However, they must be monitored carefully so inmates don’t use in-cell phones to harass or intimidate victims or witnesses or plot crimes.’

The roll-out builds on the expansion of in-cell telephones announced over the summer as part of a £30million package of measures to boost safety and security across the prison estate.

Other measures taken by ministers to tackle mobile phones in prisons include security measures such as body scanners and improved searching techniques.

The Government is also bringing in legislation to allow prisons to use interference technology to disrupt mobile telephone signals and prevent illegal use of mobiles by prisoners.

Peter Dawson, who is director of the Prison Reform Trust, said: ‘This is very welcome news for prisoners’ families, who are very often the key to a crime free future for people leaving prison.

‘David Gauke is right to point to other benefits too. Access to legitimate in-cell phones can reduce tension and self-harm. It also undermines the market for illegal mobile phones in prison, and all the violence associated with it. This is a big step in the right direction.’

Serious criminals such as murderers and rapists would not be automatically excluded from the scheme. Two of the jails getting in-cell phones before 2020 – Belmarsh and Manchester – are Category A.