Stunning pictures captured the breathtaking beauty of the biggest and brightest supermoon of the year which illuminated skies across the United States on Tuesday night.

On April 7, the pink supermoon, sometimes called a Paschal full moon, filled the night sky with a bright and luminous tribute to the spring season, shining above some of the most famous landmarks in the United States including the Empire State Building and the Washington Monument.

The name comes from the Greek word for ‘passover’, chosen because the pink supermoon is the first full moon to take place after the Spring Equinox, which occurred on March 19.

Even though it’s called a pink supermoon, the moonlight isn’t actually pink. 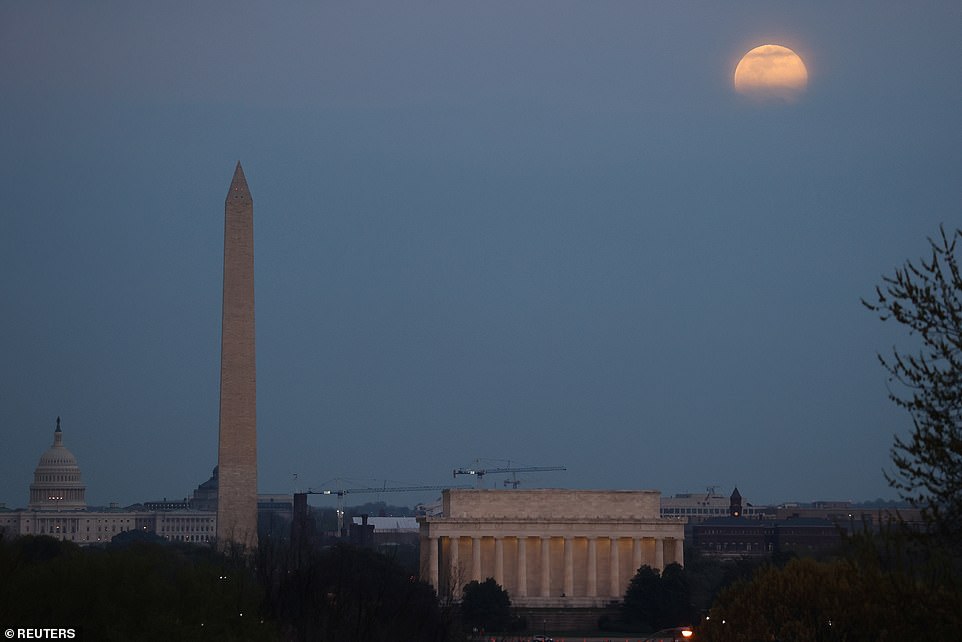 A ‘pink’ supermoon rises over the U.S. Capitol, Washington Monument and Lincoln Memorial on Tuesday night 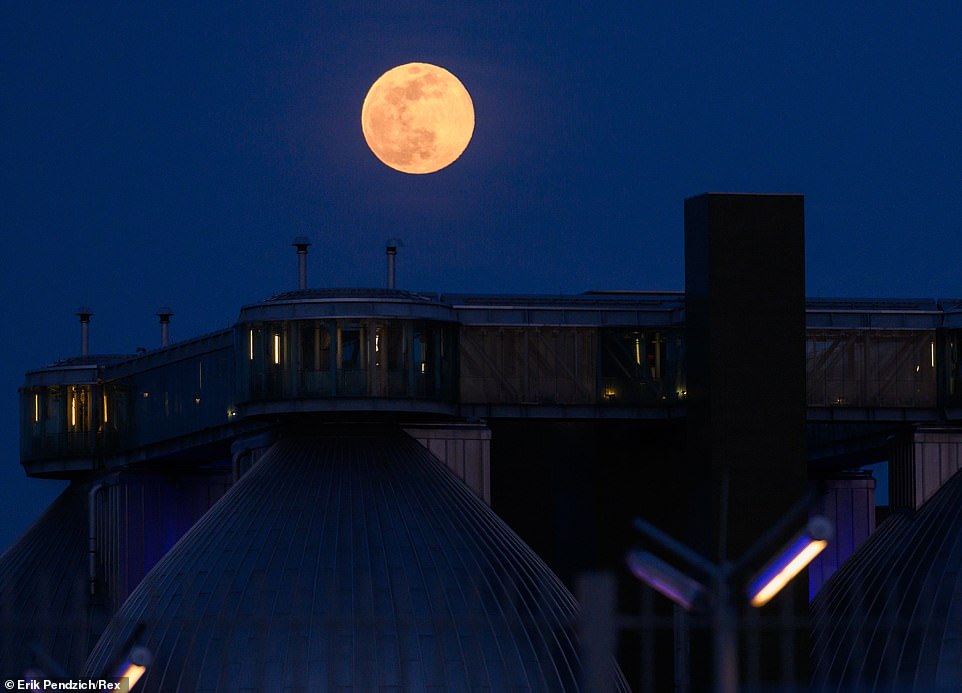 It is set to be the largest lunar event of the year,  captured here over the Newtown Creek Wastewater Treatment in New York 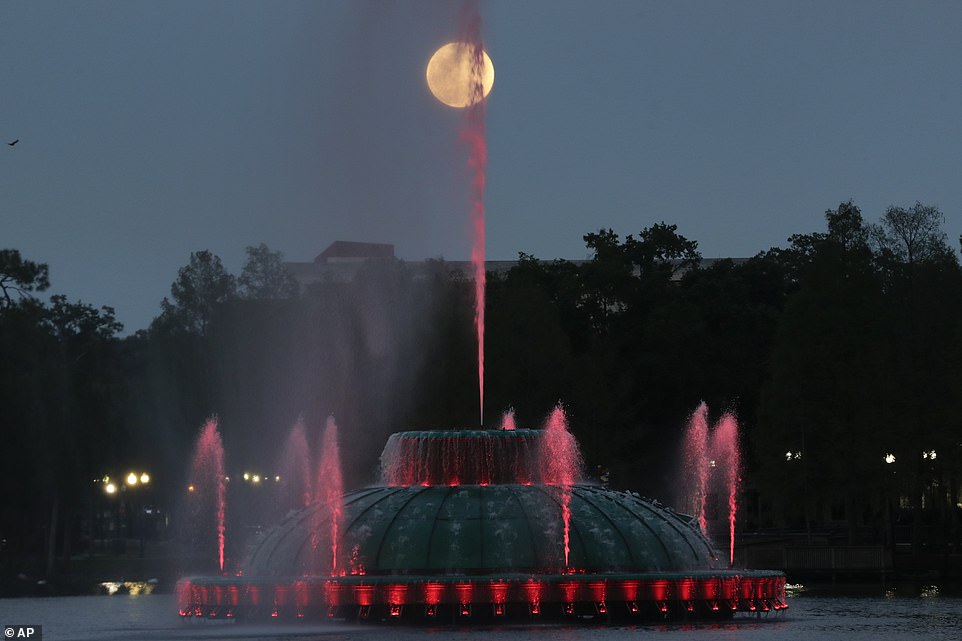 The super moon rises in the sky in front of a fountain at Lake Eola in Orlando, Florida, on Tuesday

The ‘pink’ label was chosen in part as a reference to a type of wildflower native to North America called ‘phlox subulata,’ which has a vivid pink hue and is a common sign of spring, according to a report in Newsweek.

As the moon rose to prominence at about 10:30 PM EST, amateur astronomers grabbed pictures of the event and posted them to social media.

It was photographed shining bright above New York as people gathered along the waterfront in Brooklyn and New Jersey to capture it hanging above the Manhattan skyline. 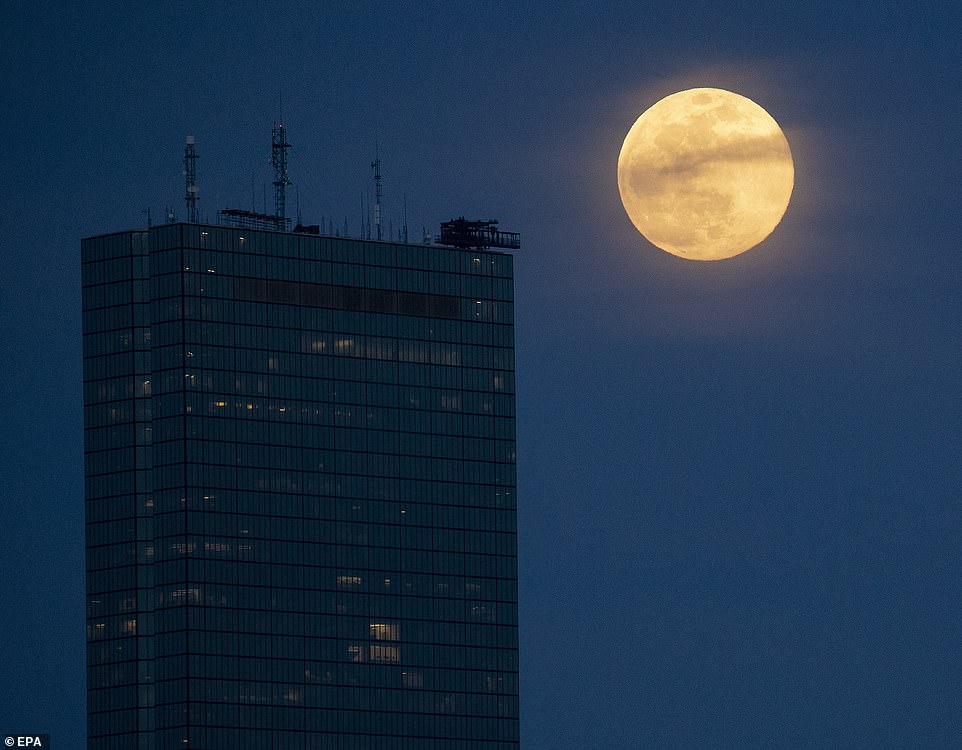 The moon, seen here behind the 200 Clarendon Street, formerly know as the John Hancock Tower, in Boston, is not named a ‘pink’ supermoon because of the light is gives out but is named after a North American flower 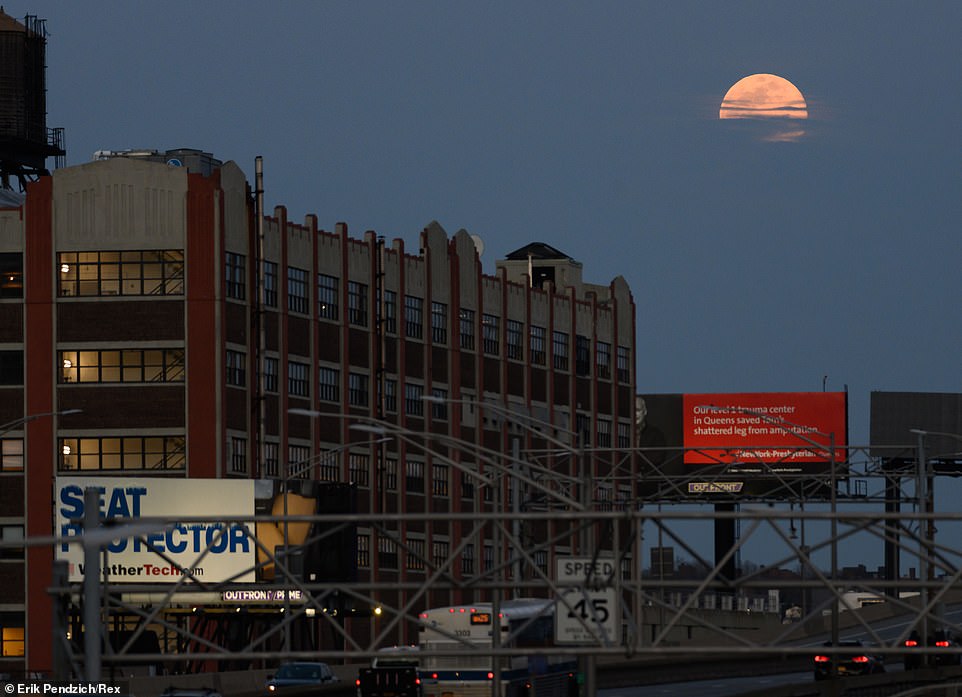 A supermoon such as this one seen over the Long Island Expressway in New York on Tuesday occurs when the moon is at the closest point of its orbit with the Earth. This is the supermoon after the Spring Equinox which occurred on March 19 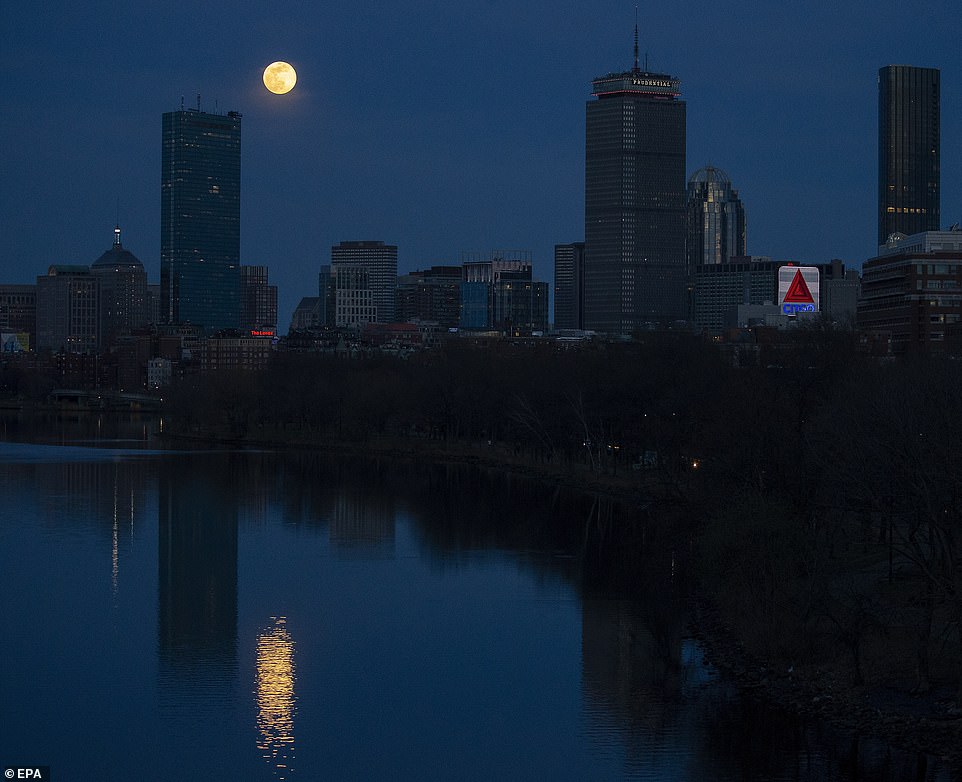 The name for the supermoon, seen here in Boston, comes from the Greek word for ‘passover’, chosen because the pink supermoon is the first full moon to take place after the Spring Equinox, which occurred on March 19 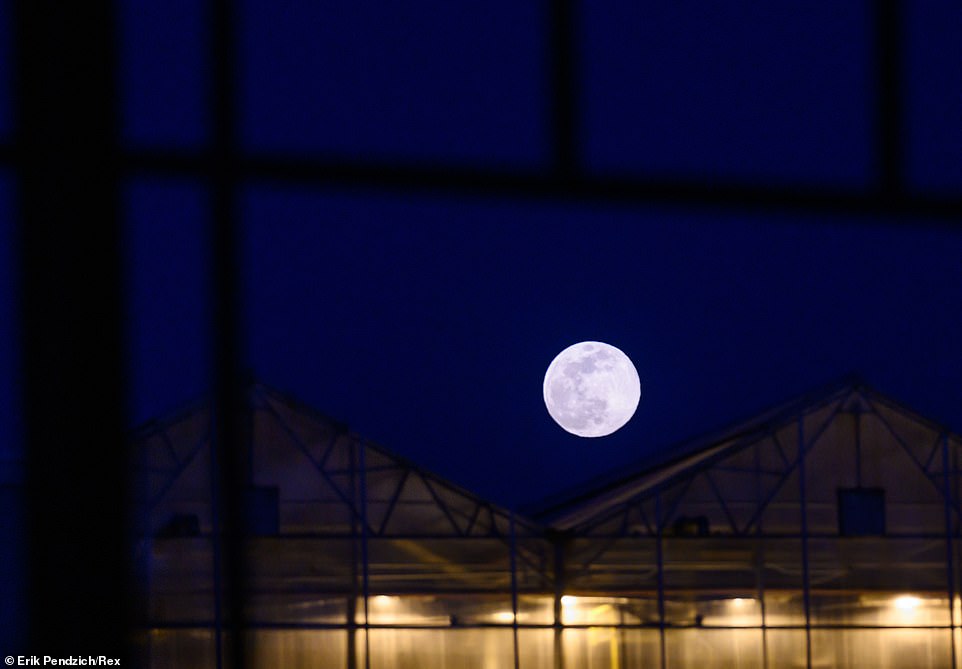 The moon rose to prominence at around 10.30pm on Tuesday but was seen all over the world 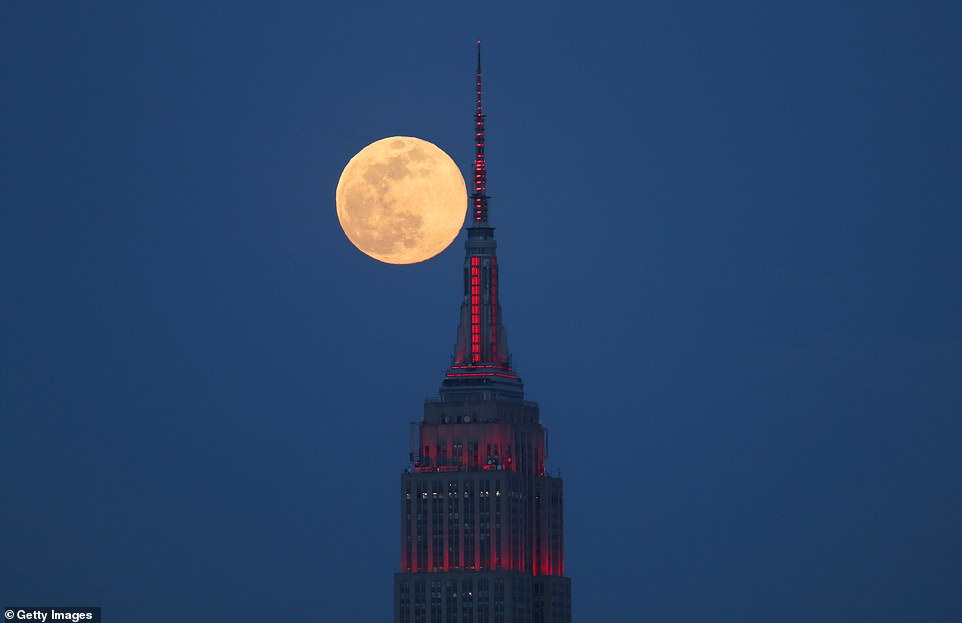 Stunning photographs showed it in the sky side by side with the Empire State Building which was illuminated in red and white in tribute to the city’s healthcare workers battling on the frontlines against the coronavirus pandemic.

It was also pictured shining bright as it rose above the Washington Monument and in states across the east coast from Florida to Massachusetts.

Shots of planes passing in front of the moon highlighted how large it appeared in the sky as a relatively cloudless night in many east-coast cities set up a perfect viewing opportunity for the year’s largest lunar event. 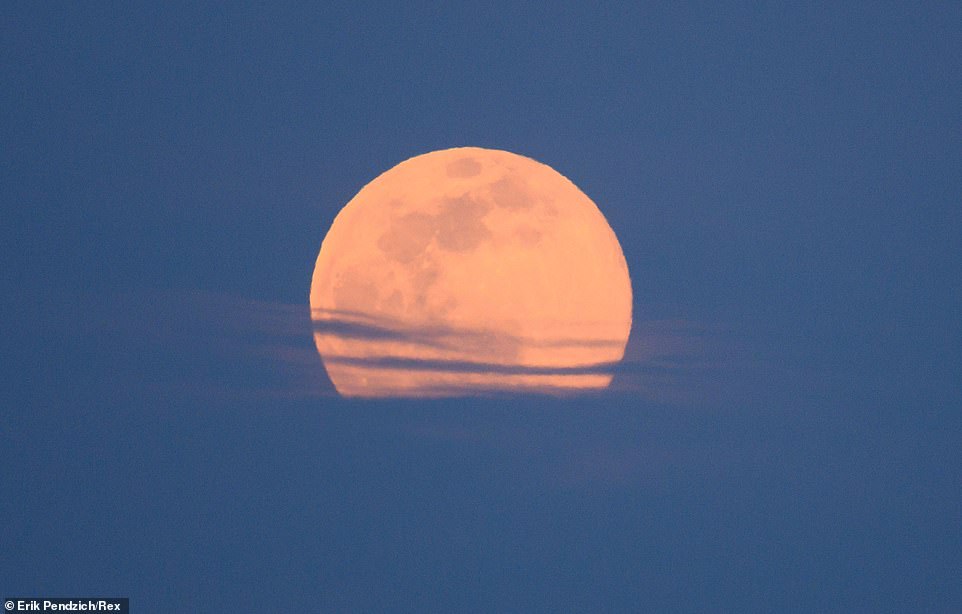 The pink supermoon, seen here over New York, is one of the largest lunar events that will take place in 2020 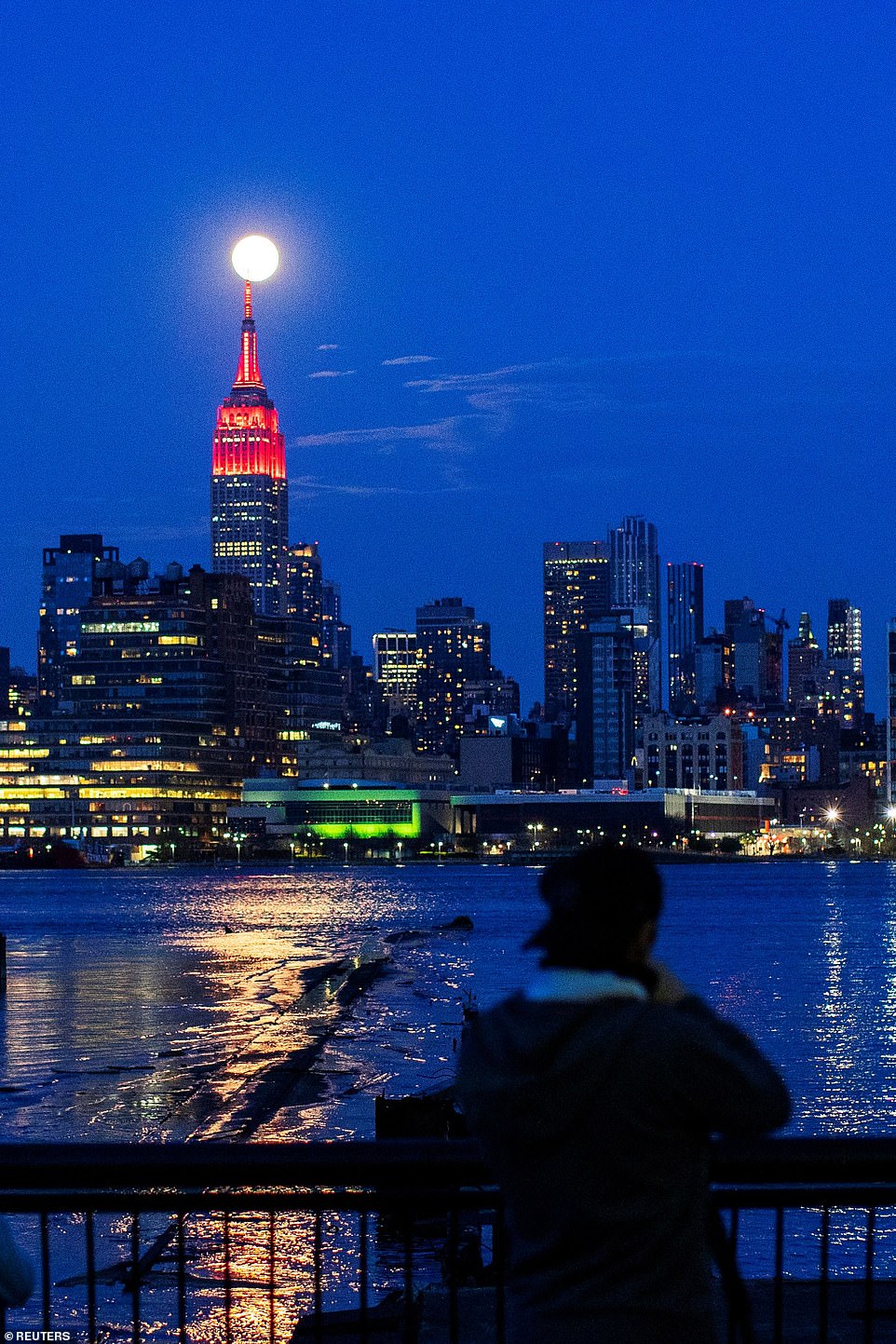 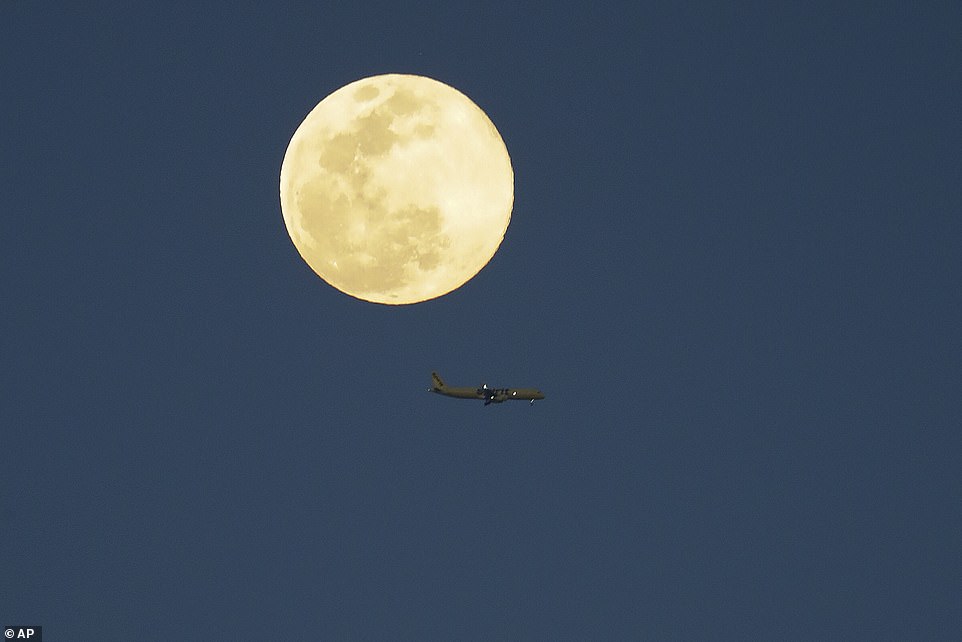 A supermoon typically only occurs once a year, when a full moon coincides with the moon also being at the closest orbital point to Earth, called a perigee.

Compared to standard full moons, supermoons can appear between seven and 14 percent larger and up to 30 percent brighter.

Supermoons are relatively rare because the moon’s orbital path around the Earth is elliptical instead of circular, meaning that full moons rarely occur when the moon is also at its perigee.

Rather, most full moons occur when the moon is further away from the Earth, making it seem dimmer and not quite as big as it does during a supermoon.

On Tuesday, Scientist Noah Petro of NASA’s Goddard Space Flight Center in Maryland encouraged people to take advantage of the phenomenal lunar event even if they could only look out their living room window.

‘If you can’t get out safely … then fine,’ Petro told Time.

‘Go out next month or whenever it’s safe again. Use the full moon as an excuse to get out and start looking at the moon.

‘Use this as an opportunity to not physically distance yourself, but emotionally connect with something that is physically far from us.’ 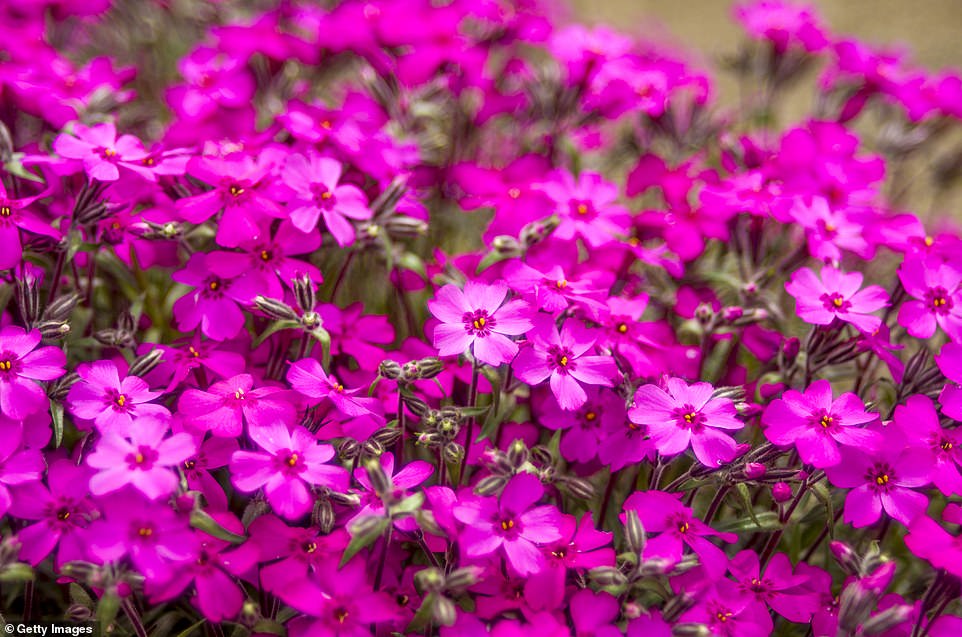 The pink supermoon is also the first full moon to take place after the spring equinox. It’s called pink not because of the color of its light, but after the ‘phlox subulata,’ a species of North American wild flower with a vivid pink hue that are a common sign of springtime

WHAT IS A FULL PINK MOON AND WHERE DOES IT GET ITS NAME?

The phenomenon, known as the ‘Pink Moon’, earns its name from the flowering of the brightly-coloured herb ‘moss pink,’ which typically coincides with its arrival.

The name comes from the Herb moss pink phlox, or ‘wild ground’ phlox, which blooms in early spring in the US and Canada.

In the Northern Hemisphere, the April full moon lines up with the blooming of one of spring’s earliest-flowering plants – wild ground phlox, or ‘moss pink’.

The phenomenon, known as the ‘Pink Moon’, earns its name from the flowering of the brightly-coloured herb ‘moss pink’

The pink moon, which is also known as the grass moon and the egg moon, was given its moniker by Native Americans, who provided a name for each full moon to help them keep track of time.

Native Americans have a name for the full moon of every month in the calendar, including Wolf Moon for January, Snow Moon for February and Worm Moon for March – then Flower Moon in May. Strawberry Moon is for June, Buck Moon is for July and Sturgeon Moon is for August.

In September, there is a Harvest Moon, Hunter’s Moon is in October, Beaver Moon is in November and Cold Moon is in December.